Bonus places to visit this weekend

If you're out and about this weekend, here are a few "bonus" places to visit along the scenic drive that are frequently overlooked:

The scene with Burfordville Covered Bridge and Bollinger Mill is easily one of the most photographed locations in the state. However, Bollinger Mill State Historic Site is home to another important feature: the final resting place of George Frederick Bollinger: 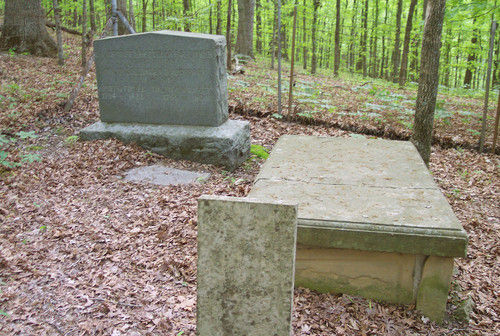 A plaque on the back of the headstone describes Bollinger as a "colonizer, statesman, soldier and patriot." That neatly summarizes the life of a man who played a key role in the early history of Southeast Missouri: 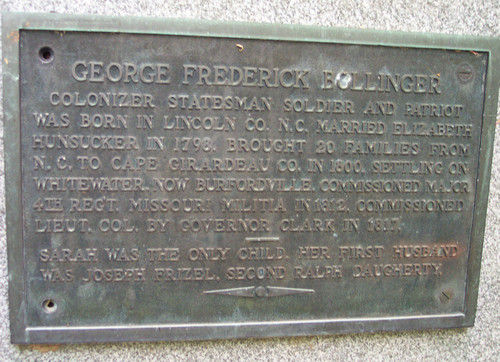 The Bollinger family cemetery is located near the top of the hill southwest of the mill. Look for the faint trailhead at the far end of the parking area. You can ask the docent inside the mill for directions. In fact, that's a good idea anyway, since the mill is open for free tours during the scenic weekend. Be sure to check out the milling machinery inside: 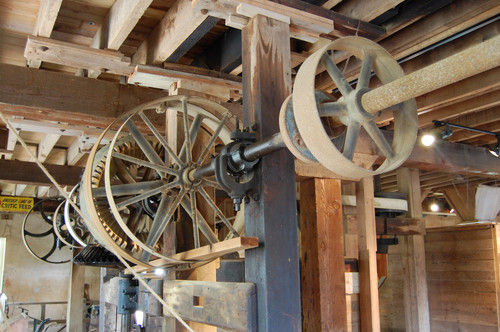 If you're lucky, the covered bridge might be open for light auto traffic. It's usually opened for special events, including the scenic drive, but was closed last year because of minor damage from the March 2008 flood.

Speaking of bridges, the scenic drive passes through Millersville, the home to a classic steel bridge over Whitewater River on Highway 72: 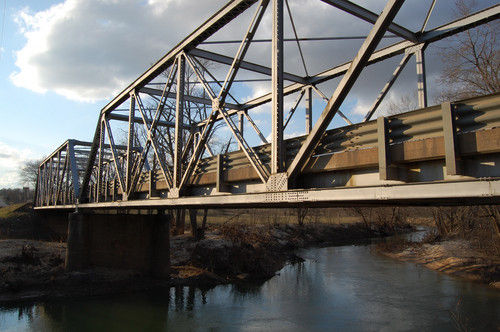 Work is underway to replace this 1923 bridge. It won't be around much longer.

When I drove through Delta recently, I noticed the Hickory Ridge above the town has suffered from landslides thanks to the crazy weather from last winter: 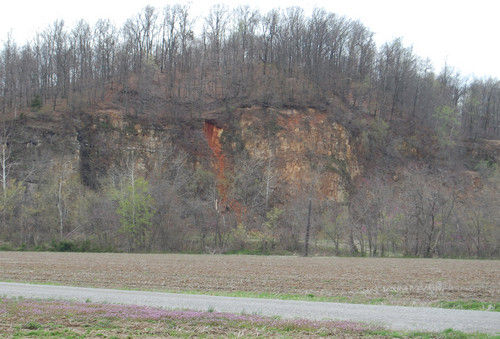 The landslides can be glimpsed from Highway 25 on the west edge of Delta.

While cruising Route N between Delta and Leopold along the scenic drive, you can take a brief detour on Route U to visit the Block Hole, a man-made "rapids" of sorts along the Diversion Channel. If you squint your eyes, it almost looks like this was transplanted from Colorado: 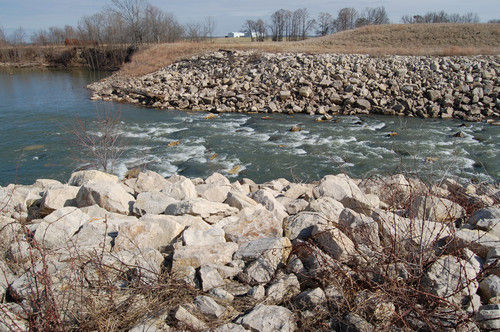 The town of Marquand is a bit far from the Mississippi River, but it is included on the brochure for the scenic drive. In the middle of Marquand, check out the remains of the old steel bridge that once spanned the Castor River. When the bridge was replaced, a small segment was moved to the city park. It almost resembles a modern art creation: 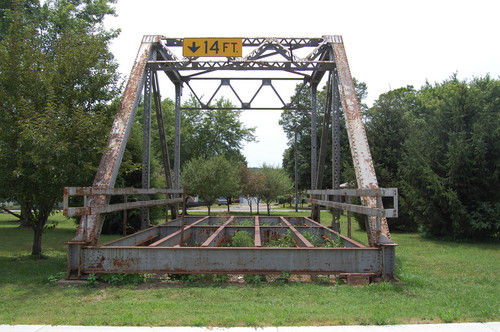 Bollinger County has two artesian wells that spew fresh water throughout the year. One is located in the Mark Twain National Forest near Marquand. The other is right next to Highway 34 just to the west of Woodland School between Marble Hill and Glenallen. 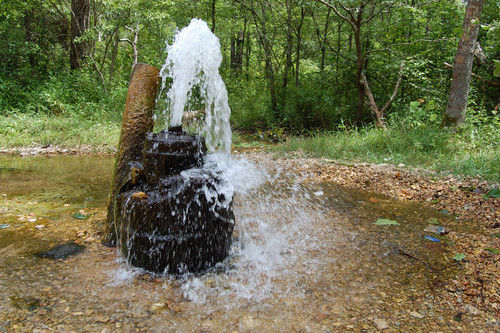 Built in 1879, the wrought iron bridge at Old Appleton is the second oldest bridge in Southeast Missouri, eclipsed only by the Burfordville Covered Bridge. After it was destroyed by a flood in 1982, it took almost a quarter-century to put it back together again. It's now the centerpiece of the town. 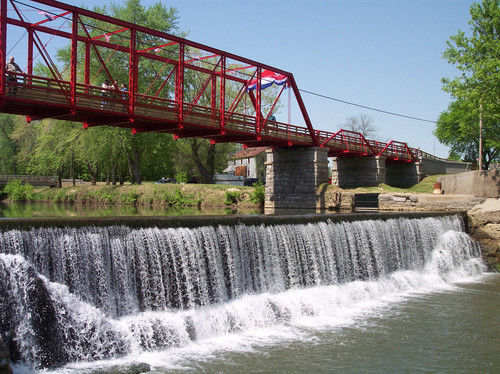 The plaques over the bridge state that the builder was the H.W. Sebastian Co. of St. Louis. From what I understand, that company was only in business for one year (1879). Their bridges were evidently built to last, even if the company didn't.

The hamlet of Apple Creek is home to a Catholic church with a very peculiar rock formation on its grounds. Water from a spring emerges from a small bluff and then immediately goes right back into the ground. The so-called Schnurbusch Karst Window is part of the elaborate system of caves that lie beneath much of Perry County. 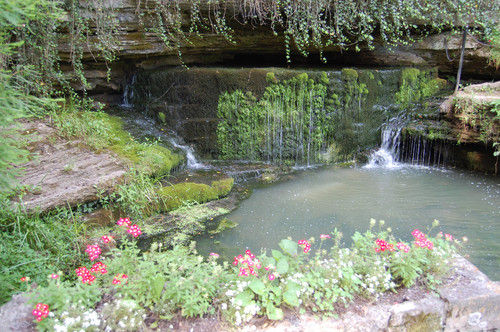 Eastern Perry County is home to several ghost towns along the Mississippi River that were lost to repeated flooding.

The site of Seventy-Six is now a conservation area at the end of Route D out of Brazeau. The origin of the peculiar name is a bit of a mystery. I've heard almost 76 different explanations. Today, everything except for the railroad tracks have been reclaimed by nature. 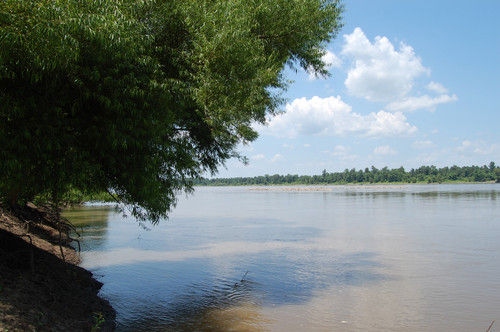 County Road 350 out of Crosstown leads to Red Rock Landing, another former settlement that is now a conservation area. From the parking lot at the end of the road, a trail leads east to some nice overlooks of the river: 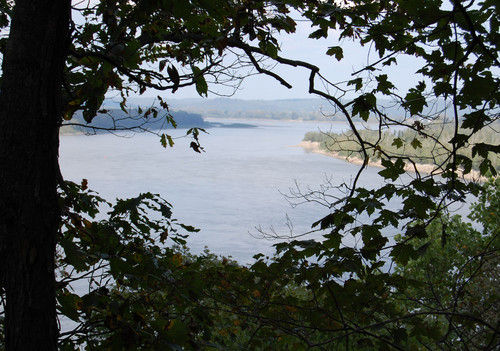 A third settlement, Star Landing, remains privately owned but can be reached by taking Route Y out of Altenburg. I'll have more on these and other ghost towns in future blogs.