Schnurbusch Karst Window is a window... on karst

Missouri is called The Cave State, and for good reason. The ground under parts of Missouri resembles Swiss cheese, riddled with caves, sinkholes, springs, and other curiosities.

This kind of landscape is called "karst topography." It forms when the bedrock, usually limestone or dolomite, partially dissolves, leaving subterranean voids. Perry County, Missouri, is the King of Karst, with over 650 known caves, a number that continues to increase as spelunkers make more discoveries.

While none of the Perry County caves are open to the general public, the karst world can still be glimpsed from the surface. Take, for example, "Schnurbusch Karst Window" on the grounds of St. Joseph Catholic Church at the village of Apple Creek, northwest of Old Appleton. 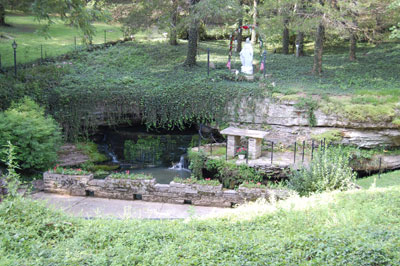 This is the site of a collapsed cave. Water emerges from a spring... 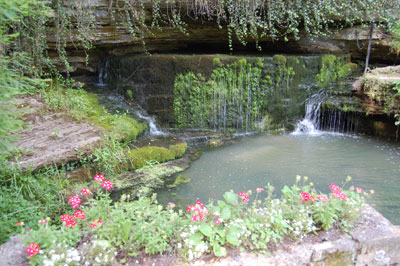 ...and then flows under a stately stone bridge... 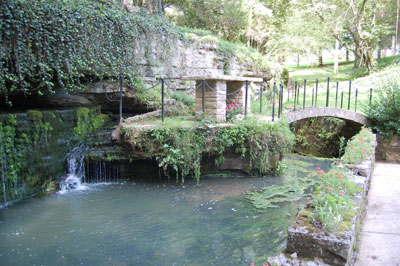 ...before being swallowed into the ground again. 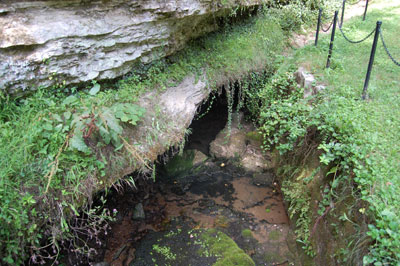 The church has taken advantage of the topography to create a peaceful park, complete with benches forming an amphitheatre. It's only a short walk from the parking lot, making it a cool place to visit during the dog days of August.

Schnurbusch Karst Window is open to the public, but you may have to come back later if you visit when the church is holding services or special events here.

1. Take I-55 north to the Old Appleton exit, turn right on Route KK, and then left on Highway 61. You can also take Highway 61 directly to Old Appleton from Fruitland.

4. Follow CR 520 a short distance to the cross and parking lot next to St. Joseph Catholic Church (on the left). Park here and walk down the trail, passing the Stations of the Cross, until you reach the Karst Window.

Origin of the name: Schnurbusch, a family name, was the original name for the village now called Apple Creek