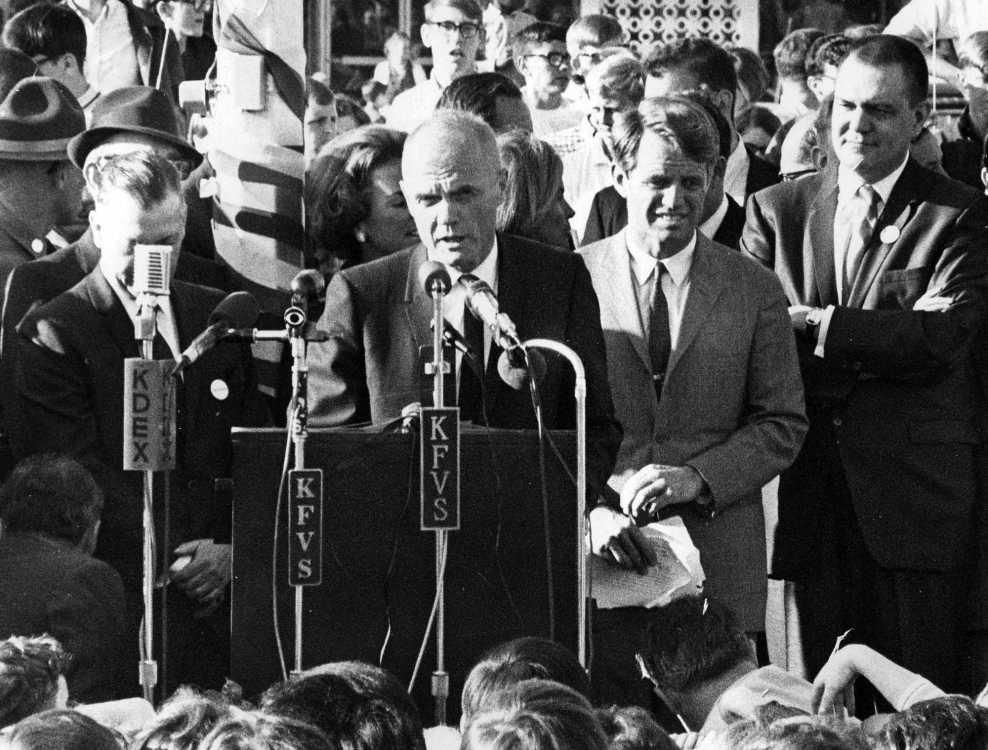 The Southeast Missourian covered the event for the April 26 edition. Here are excerpts about Glenn from one story:

Col. Glenn said 1968 is an important year for this country and he feels Sen. Kennedy is the man to meet the challenges.

He said the senator has faced squarely to the country's problems. "I think he is the best man."

When Mrs. Kennedy was introduced, the crowd renewed its cheering. And John Glenn, the former astronaut, had to wait until the noise about him subsided before he could make his remarks.

He was a surprise. There had been no advance notice that Mr. and Mrs. Glenn were in the party. America's first astronaut to orbit the earth looked launch-fit.

Col. Glenn, the first American to orbit in space, said he had joined the Kennedy campaign shortly after the senator announced his candidacy and had earlier made a tour in his behalf in Alabama.

The former astronaut was asked if his activities mean a return to politics for him.

"I have no plans for the moment," he replied. Col. Glenn added that his primary interest at this time is in helping the senator win the nomination.

Feb. 20, 2012 is the 50th anniversary of John Glenn's flight around the Earth in Friendship 7. A member of the Mercury Seven, he was the first American to orbit the Earth in 1962. After retiring from NASA, he entered politics as a Democrat and represented Ohio as a U.S. Senator from 1974 to 1999.

Sen. Robert F. Kennedy was assassinated six weeks after his Cape Girardeau visit on June 5, 1968 in Los Angeles, Calif. John Glenn was with him.

Another First for Missourian

A portable Associated Press Wirephoto transmitter was placed in The Missourian's newsroom Thursday to send photographs of Sen. Kennedy's visit to the city throughout the nation.

Fred Waters, AP photographer in St. Louis, brought the transmitter here and took photographs for the wire service. Transmission was to Chicago via telephone line and from there out on The Associated Press Wirephoto network.