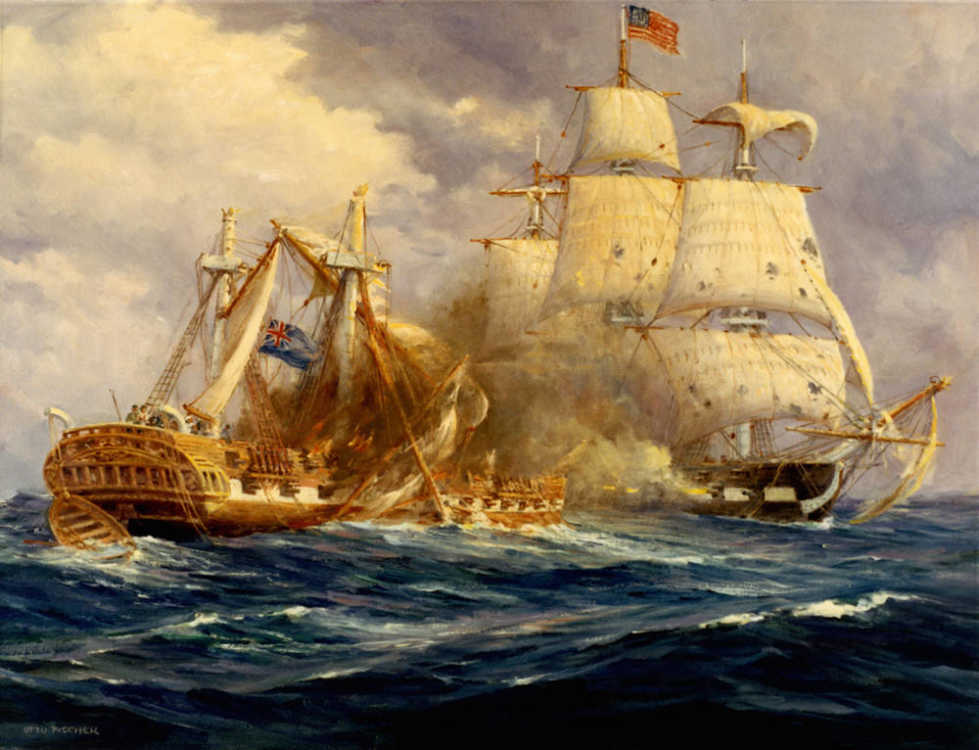 This painting by Anton Otto Fischer shows the USS Constitution defeating the HMS Guerriere in the War of 1812.

Local historians are well acquainted with Joseph McFerron, the first clerk for the courts of the Cape Girardeau District, since he left behind a mountain of documents penned in his distinctive handwriting. He's also known for the 1807 duel in which he shot and killed William Ogle.

The Missouri State Historical Society has recently made the Missouri Gazette newspaper available online, and these old pages reveal another aspect of McFerron's life: that of a poet. Over the years, the newspaper featured his original submissions, signed with his initials "J.M'F."

In the July 4, 1812, edition, the newspaper published a poem from McFerron about the Fourth of July. At the time, the United States had just declared war on Great Britain -- the oft-forgotten War of 1812.

Here is what he wrote:

In union celebrate the day
Our fathers burst the tyrant bands,
And through the universe display
The standard of these happy lands.

May faith and hope our hearts sustain
To lay the foes of freedom low,
And charity new brothers gain
From burning zone to polar snow.

To arms Columbia! to arms!
Thy honor, freedom, rights to save;
Thy children fear not war's alarms
Upon the earth or stormy wave.

The virtue of Columbus guide
Each freemans soul to noble acts;
Think how he lived and how he died,
And show your zeal by worthy facts.

Our Washington, the first in war,
In peace, and in his country's love;
Learn of him what it is to dare
And place your trust in God above.

The sages, heroes, patriots, all
That freedom's eagle-standard bore,
Their many virtues now recall,
And sound their fame on every shore.

Go tell the proud insulting foes
That LIBERTY is all your own,
Deal thunder and majestic blows
And teach them that we're fully grown.

Nor sleep yourselves, nor wait their nod
But let them fell the avenging fire;
Defend your rights, the gift of GOD,
And pour upon them all your ire.