For years, Interstate 55 north of Fruitland has been graced with a billboard advertising Bronner's Christmas Wonderland at Frankenmuth, Michigan. 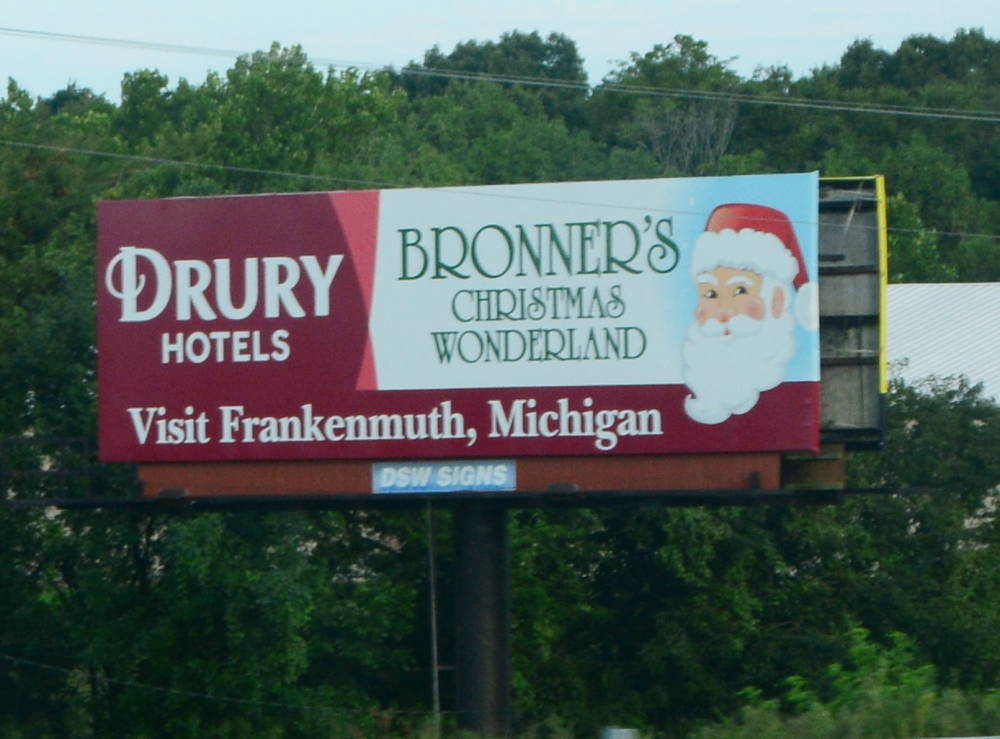 It's a bit of an odd thing to advertise here, considering that Frankenmuth is located 650 miles away and requires a solid 9 hour drive. That's a long haul to go shopping.

Sitting between Saginaw and Flint in a relatively boring part of Michigan, Frankenmuth doesn't seem like an obvious tourist draw. But this small town features two wildly popular gimmicks:

Bronner's lives up to its billing as the world's largest Christmas store. The main showroom covers 2.2 acres in the middle of a 27 acre complex. It's a good idea to study a map of the store's layout before visiting. 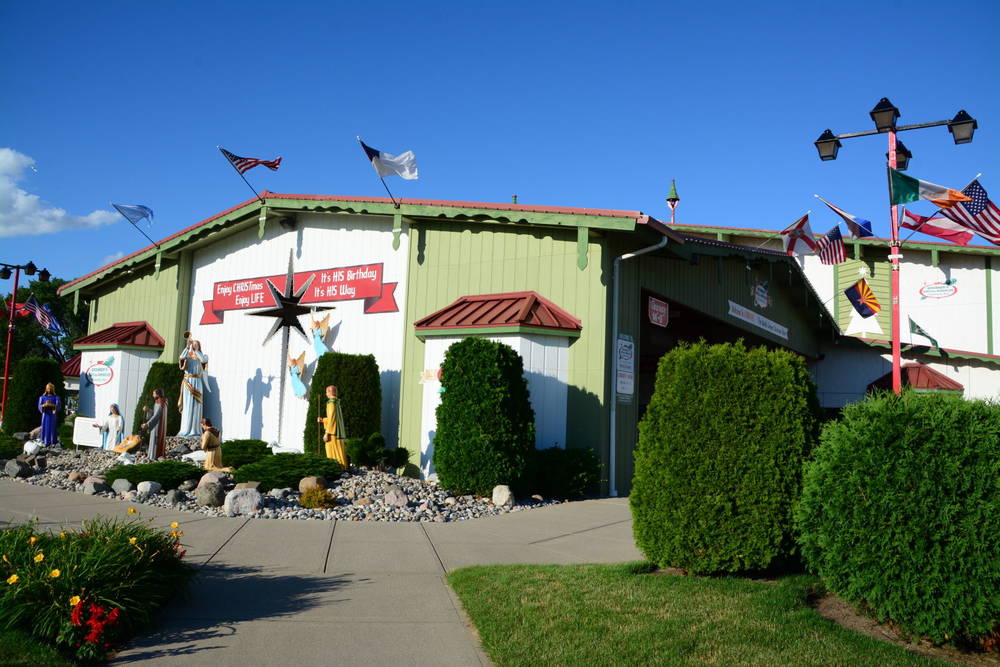 Giant nutcrackers greet shoppers at one of the entrances. They have price tags which are rather, ahhh, dollar intensive. 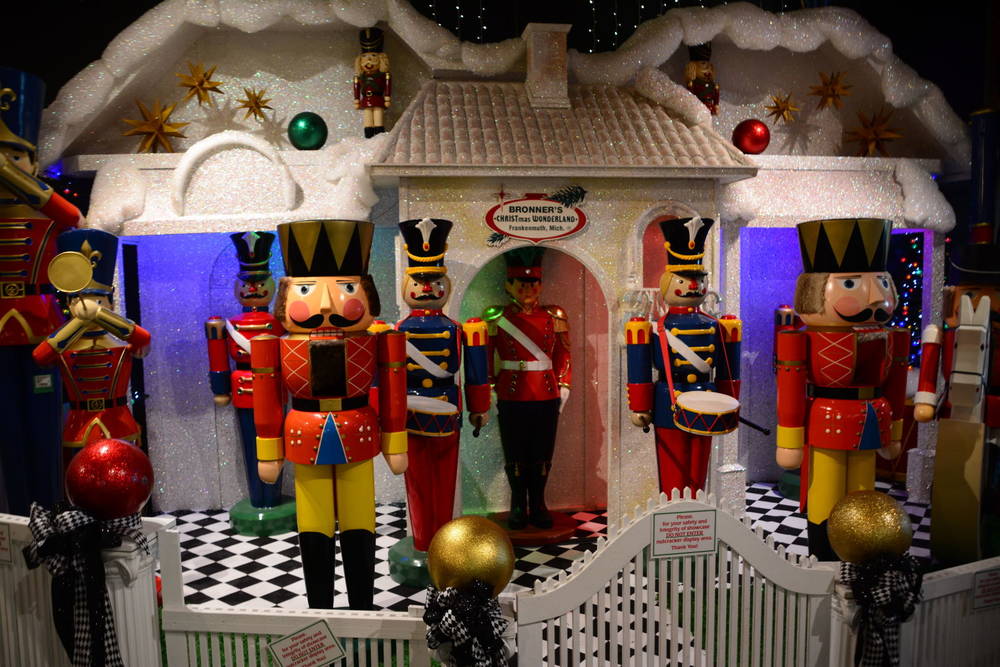 Most of the floor space is dedicated to ornaments. They are organized by color... 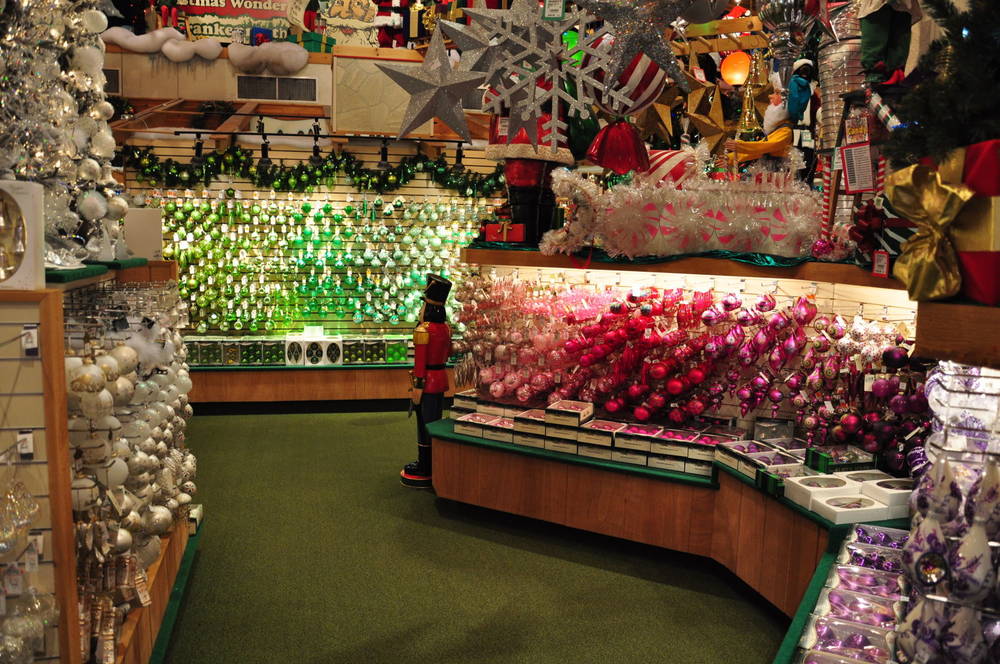 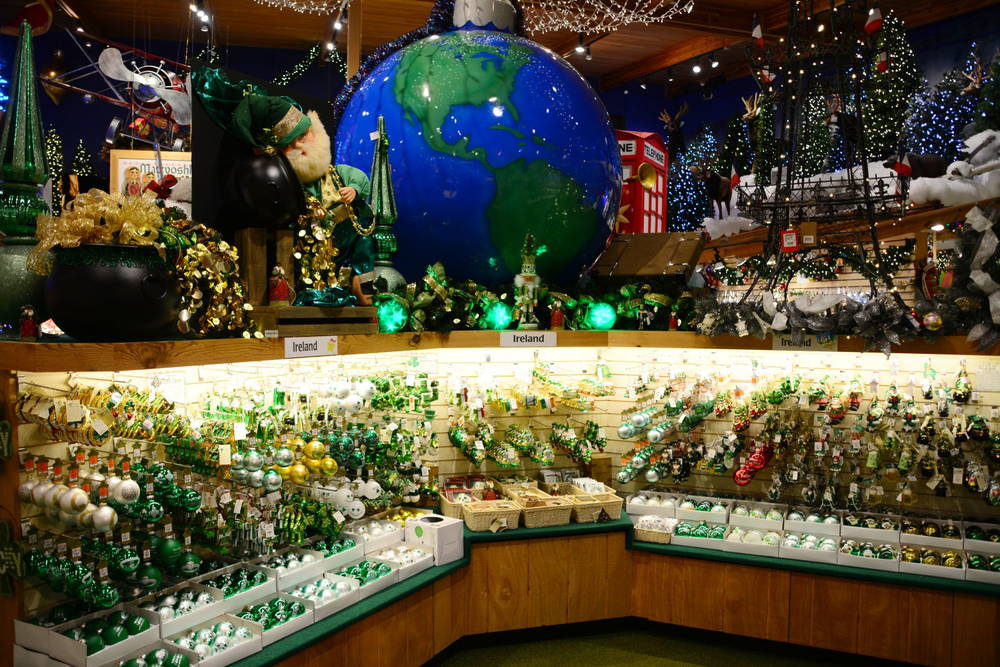 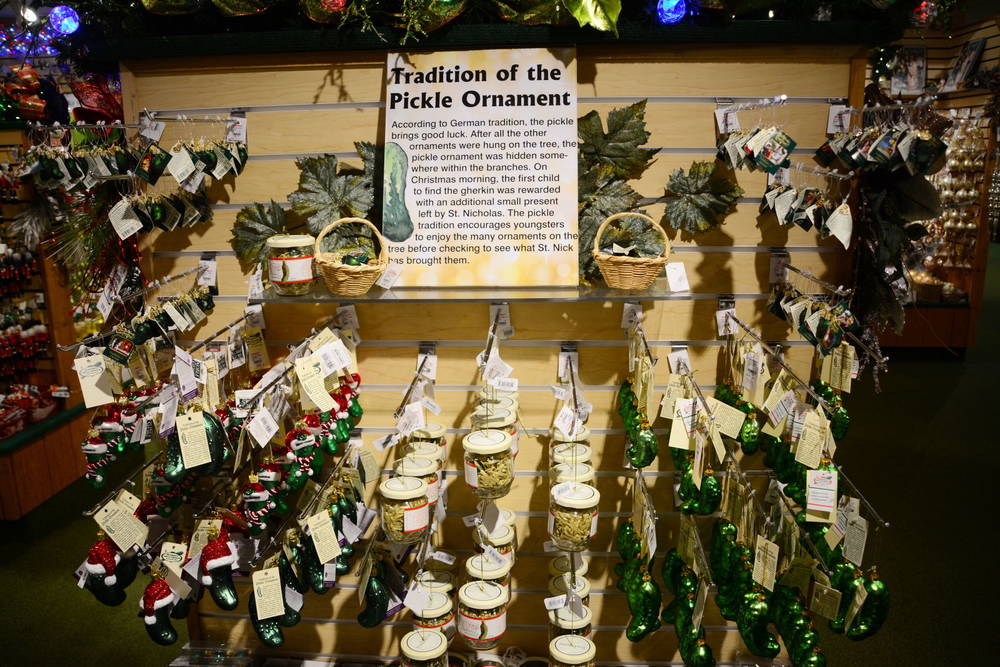 They even have an entire "Cardinals" aisle, although this is the bird variety and not the St. Louis baseball variety.

Beyond the ornaments, the store carries nativities, trees, lights, snowglobes, and... stuffed giraffes. 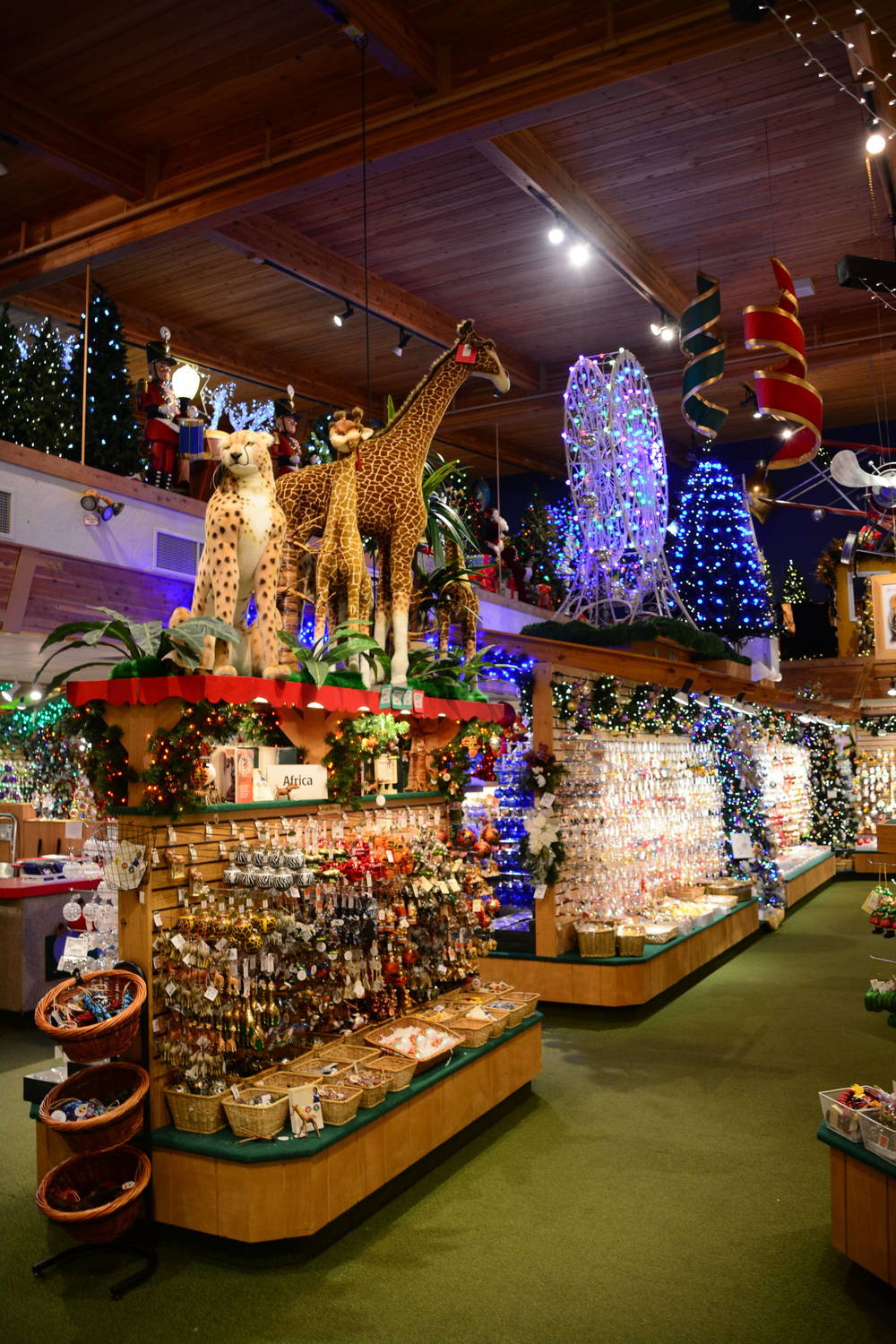 It's an overwhelming display of No'l knicknacks. Faced with this dizzying array of options, I suspect most visitors struggle to make a choice and end up settling on something from the bargain section. It's the kind of place where you feel guilty if you leave without buying at least one souvenir. 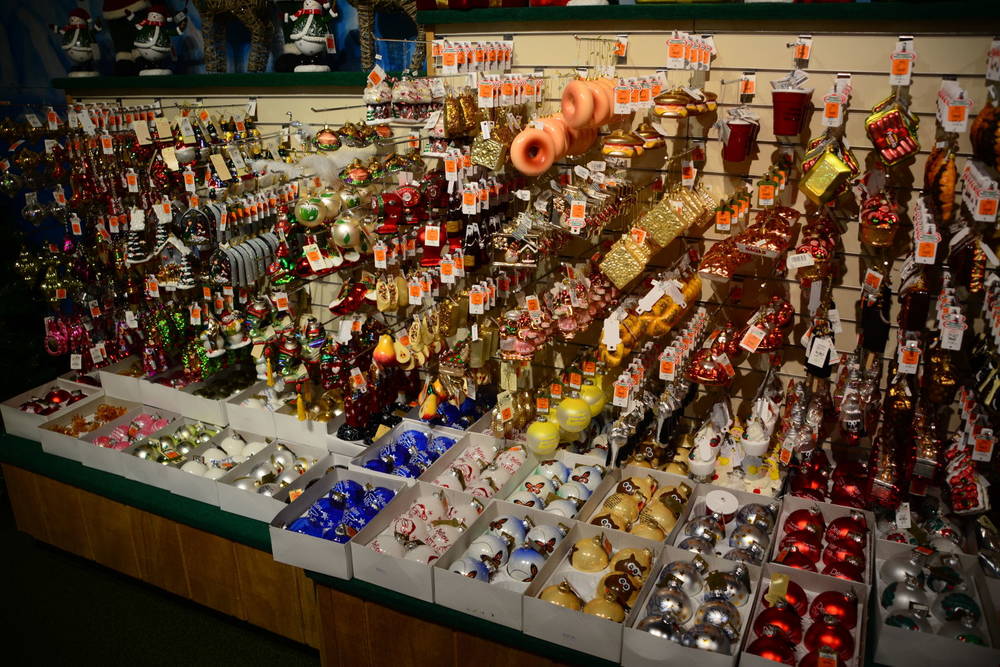 Founded in 1945 by Wally Bronner, the store has steadily grown over the years. It was helped by the sheer novelty -- which in the age of Amazon now seems quaint -- of selling Christmas merchandise 365 days a year*.

(*Well, technically 361 days since the store is closed for some holidays, including Christmas itself)

On the outside, the Bronner's campus offers a memorial replica of the "Silent Night Chapel" at Oberndorf, Austria. The Austrian chapel is itself a memorial to the St. Nicholas Church where the song Stille Nacht was first performed in 1818. 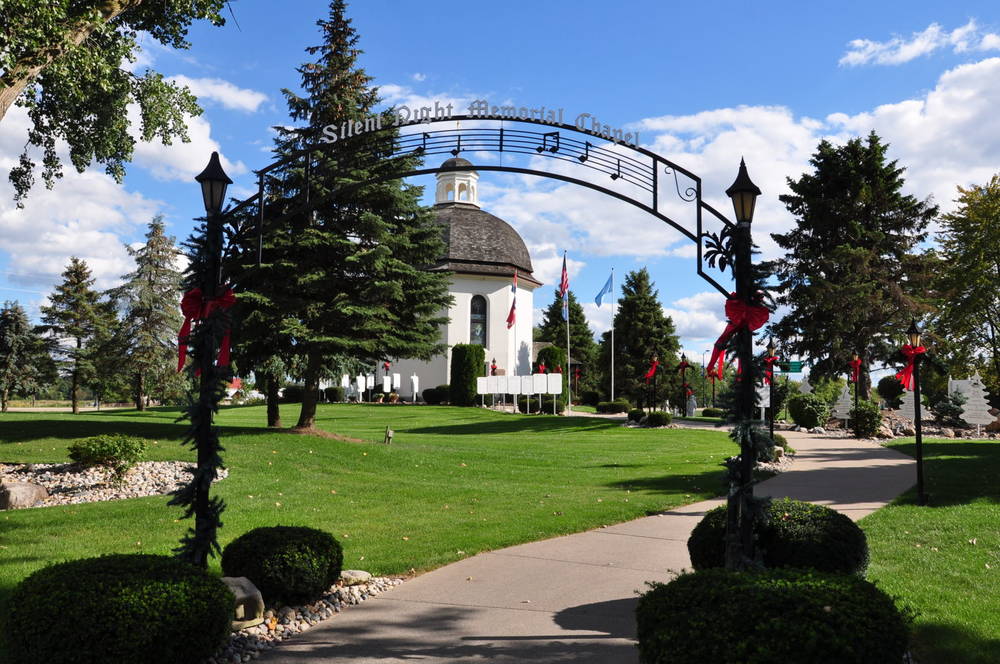 Meanwhile, the rest of Frankenmuth has also steadily grown in parallel thanks to another novelty: the makeover of the town's business district into German/Austrian/Swiss inspired architecture. This tourist gimmick originated with the Zehnder family in the 1950s who transformed the old Fischer's Hotel into the "Bavarian Inn" using ideas they gathered from a visit to Germany. 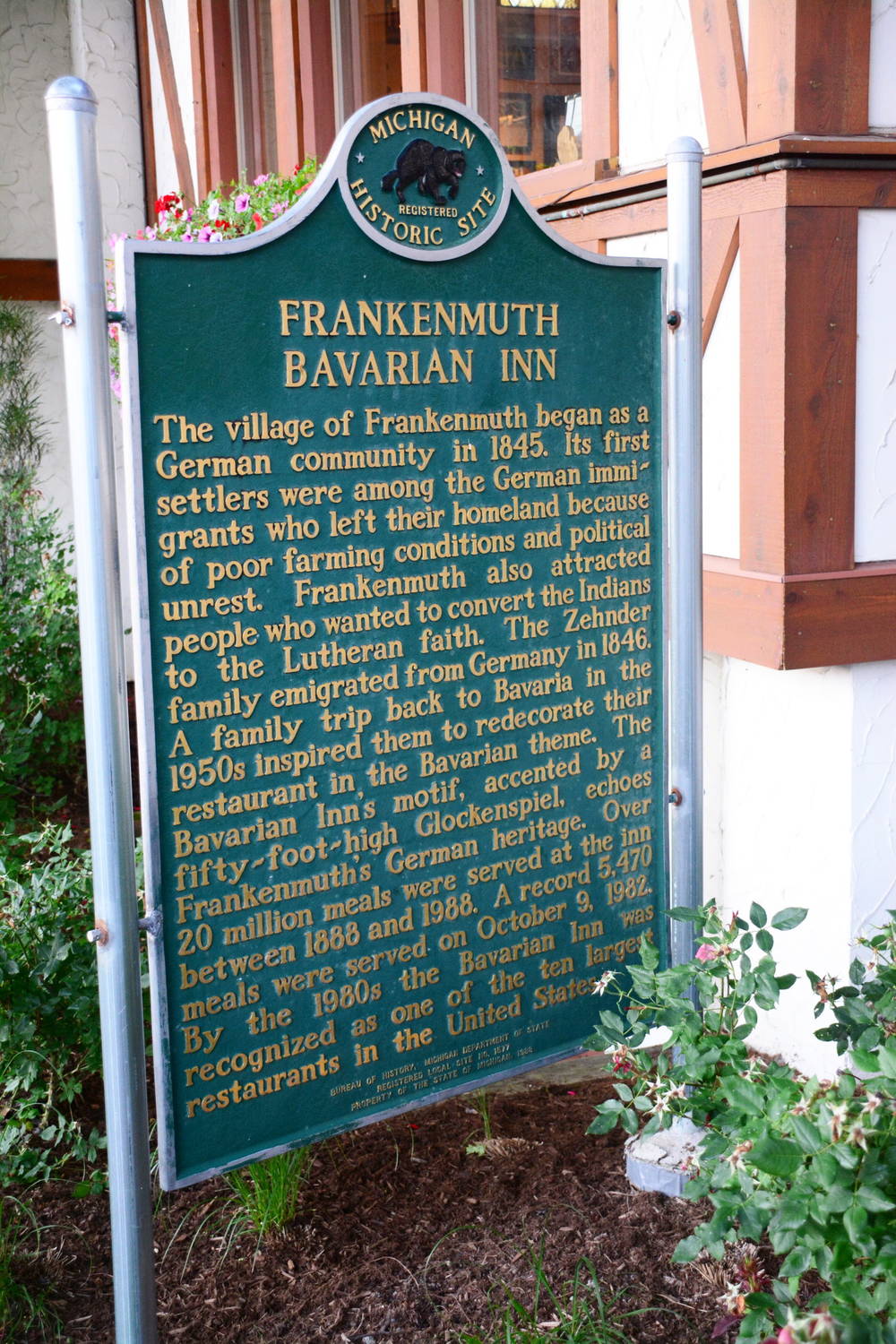 The Bavarian Inn features all the standard trappings: a biergarten, a Glockenspiel, and chicken dinners served by young people self-consciously wearing German Lederhosen. 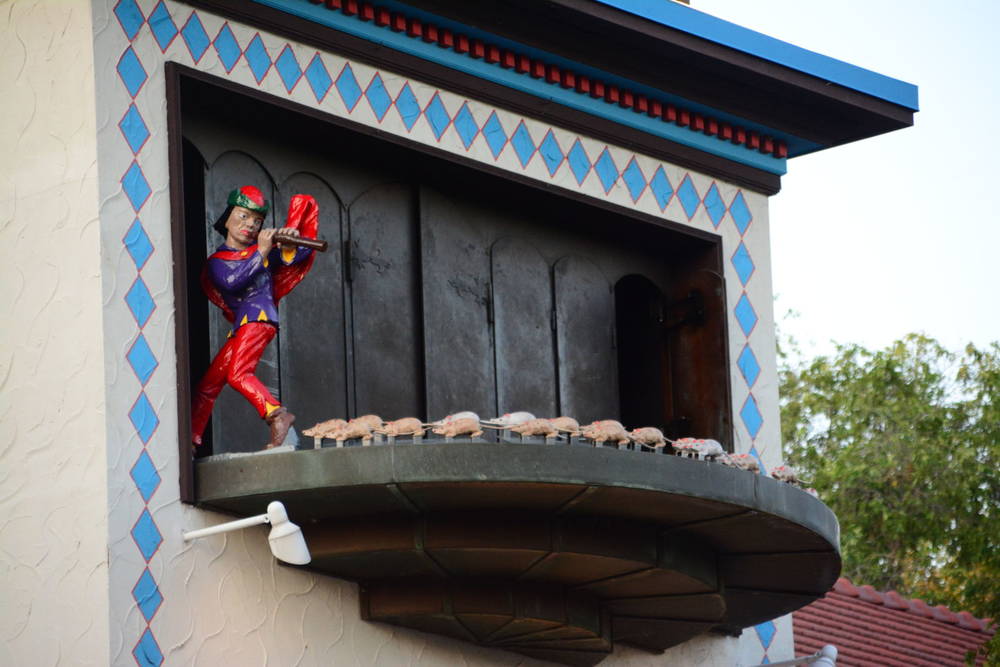 Led by the Zehnders, the "Alpine" style construction is now prevalent through the town. A Swiss-style covered bridge, for example, stands near the Bavarian Inn. 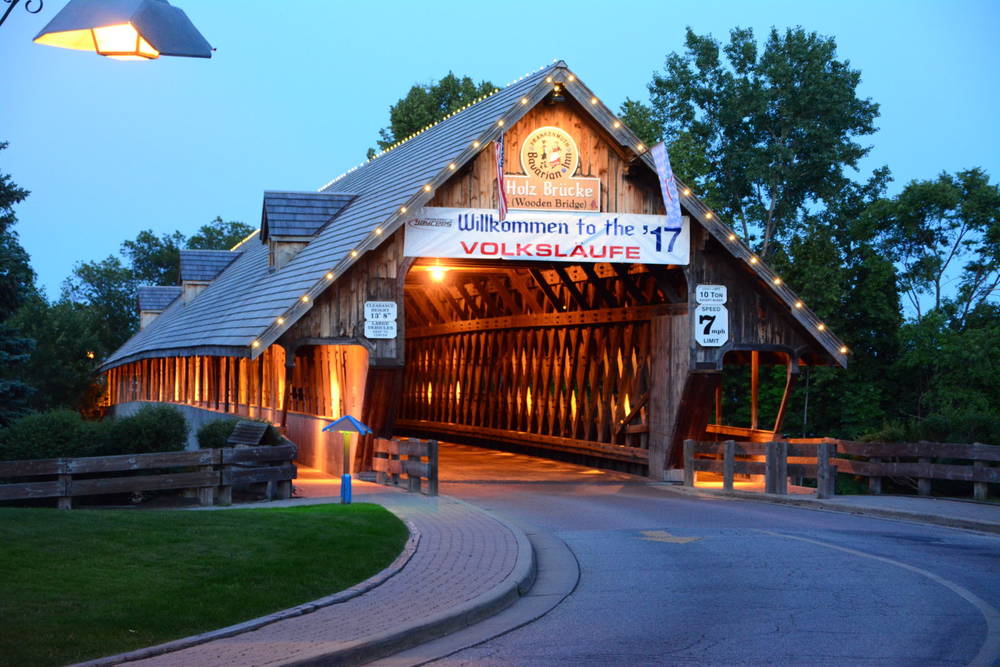 Other tourist draws include a water park and riverboat excursions. It definitely helps that "Frankenmuth" is about the most German name possible. 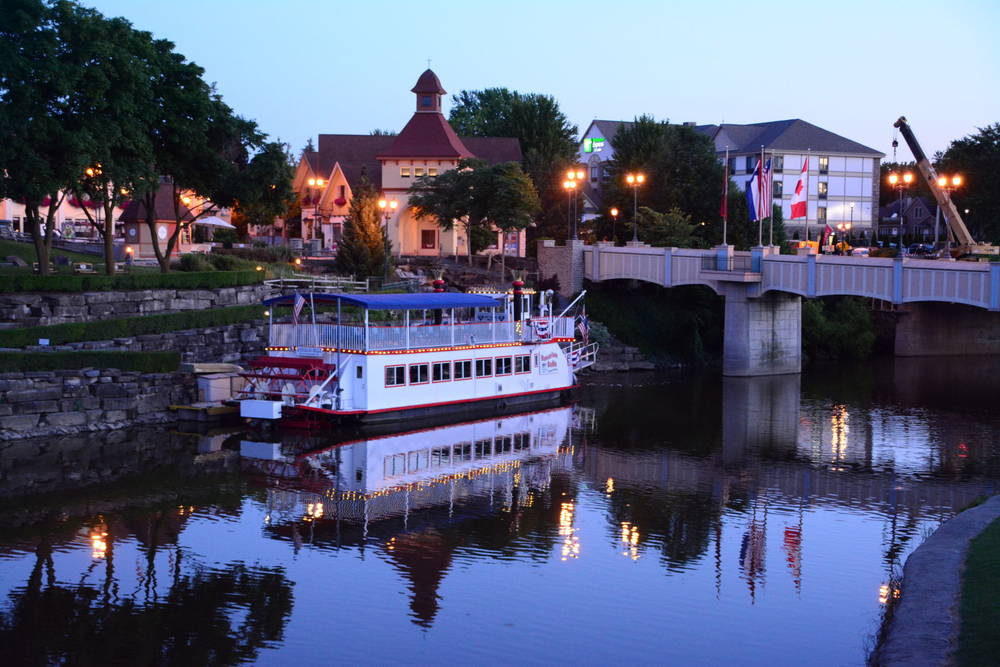 The one exception to the Germanic motif is Zehnder's Restaurant, which features a very American neon sign and a facade that was inspired by George Washington's Mount Vernon estate. Zehnder's sits directly across the street from the Bavarian Inn, and both establishments offer family-style all-you-can-eat chicken dinners. 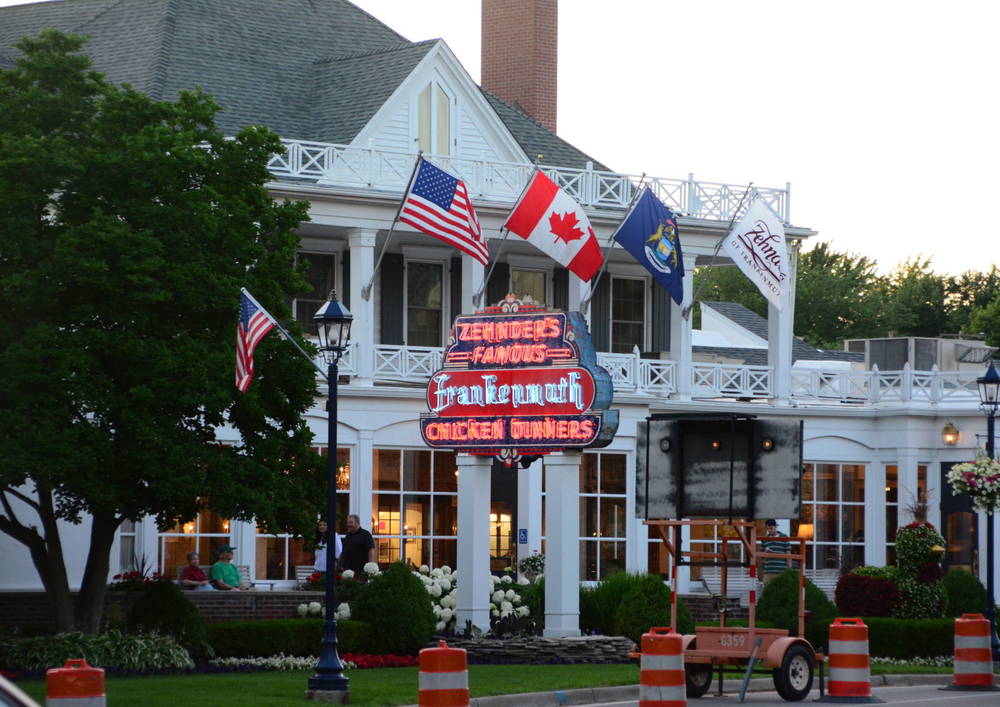 The menus appear to be virtually identical between restaurants. Given the choice, I would recommend Giant City Lodge as offering the best family-style chicken dinners at a more affordable price. Ha!

Drury operates a hotel at Frankenmuth, which looks just like the Drury Inn and Bavarian Halle at Fruitland. If you've wondered why Fruitland has a Bavarian-style hotel, strip mall, gas station, and restaurants, look no further than the Drurys and the Frankenmuth connection for helping to turn Fruitland into Fruchtland.

Overall, Frankenmuth is a huge tourist gimmick, but the sheer size of Bronner's Christmas Wonderland makes it a worthwhile stop if you ever find yourself in Michigan.