The shut-ins hidden in plain sight 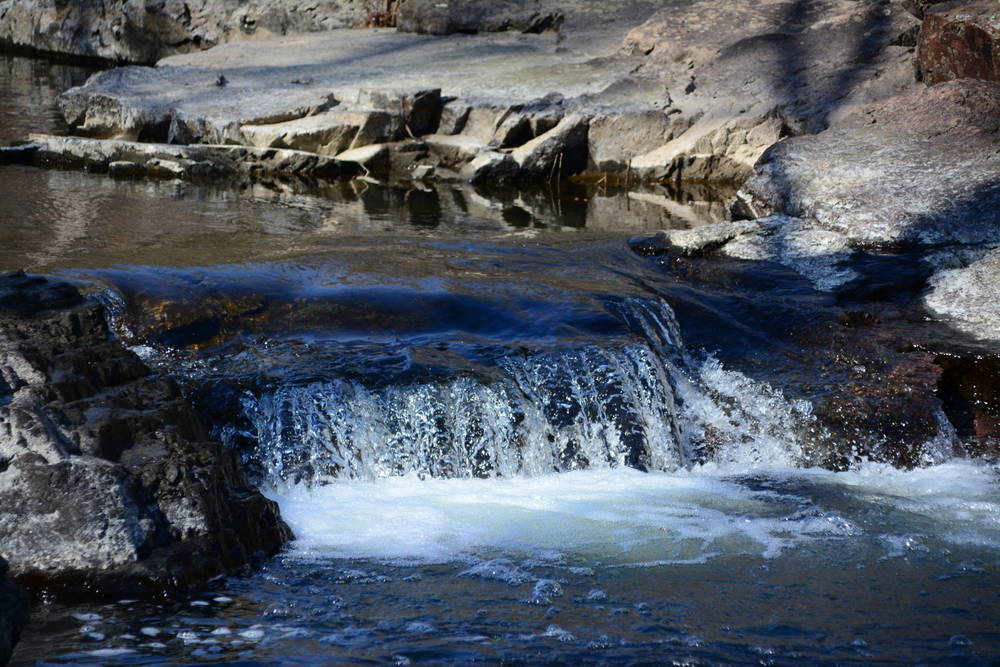 This blog is called "Pavement Ends" because I typically venture away from paved roads -- and maybe civilization in general -- to find scenic and unusual places.

But sometimes the best gems are actually located right along busy highways. The trick is knowing where to stop and look.

One of these hidden surprises can be found along Highway 72 between Ironton and Fredericktown. Heading toward Ironton, the road passes Lake Killarney and then crosses a large arch bridge over Stouts Creek. 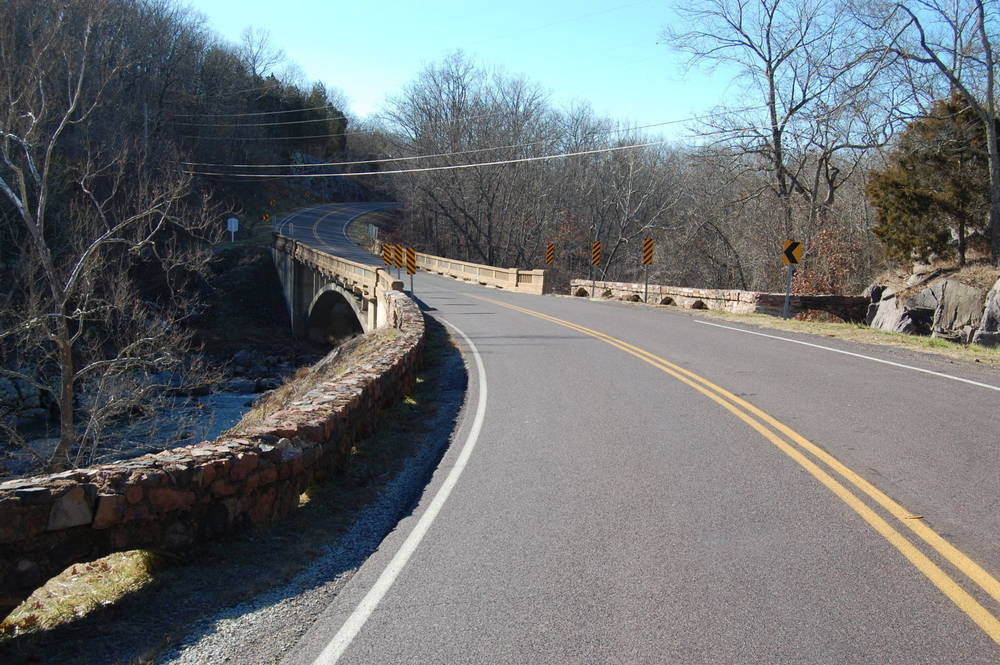 Most drivers are probably too focused on crossing the narrow bridge to notice the small, blue signs along the north side of the road that say, "MISSOURI STATE PARK BOUNDARY." 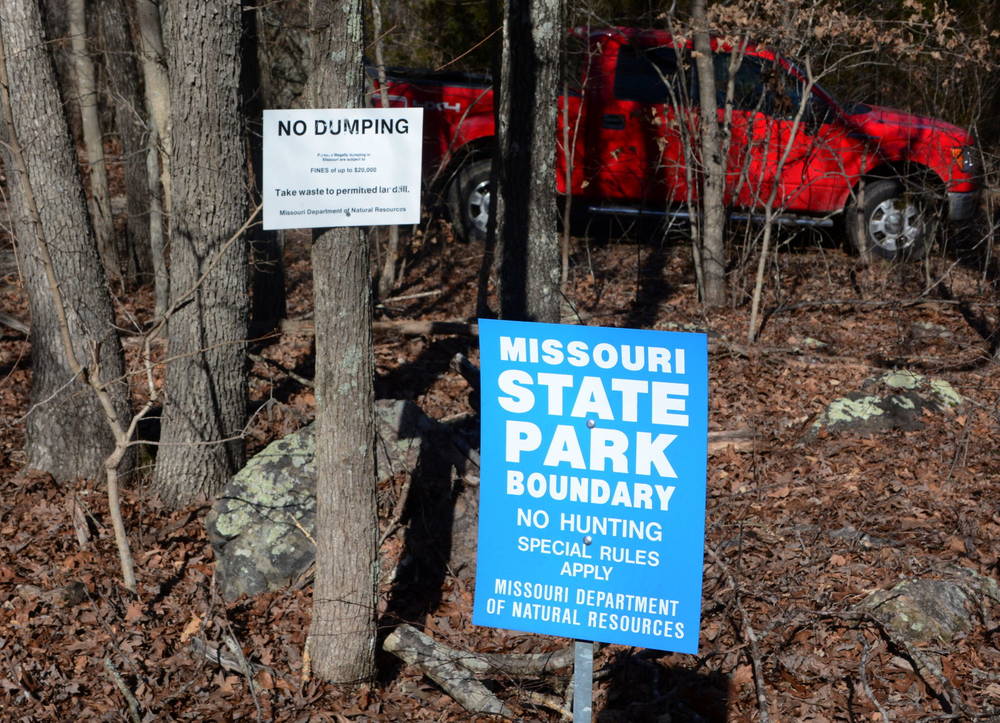 Blink and you'll miss it. But this is exactly the kind of sign that gets my attention and demands further investigation!

Parking along the shoulder of Highway 72 is dangerous here, but on a recent visit I spotted another option: a narrow driveway that provides enough room to park and turn around.

Shortly after crossing the bridge going west toward Ironton, look for a narrow driveway to the right next to a blue "STATE PARK" sign and a white "NO DUMPING" sign. The turnoff is about 250 feet past the bridge. Or, more precisely, my GPS receiver gives the coordinates as 37.58472, -90.58544.

The driveway bends to the right to provide a place to park. From here, a faint hiking trail leads east to the creek and shut-ins. 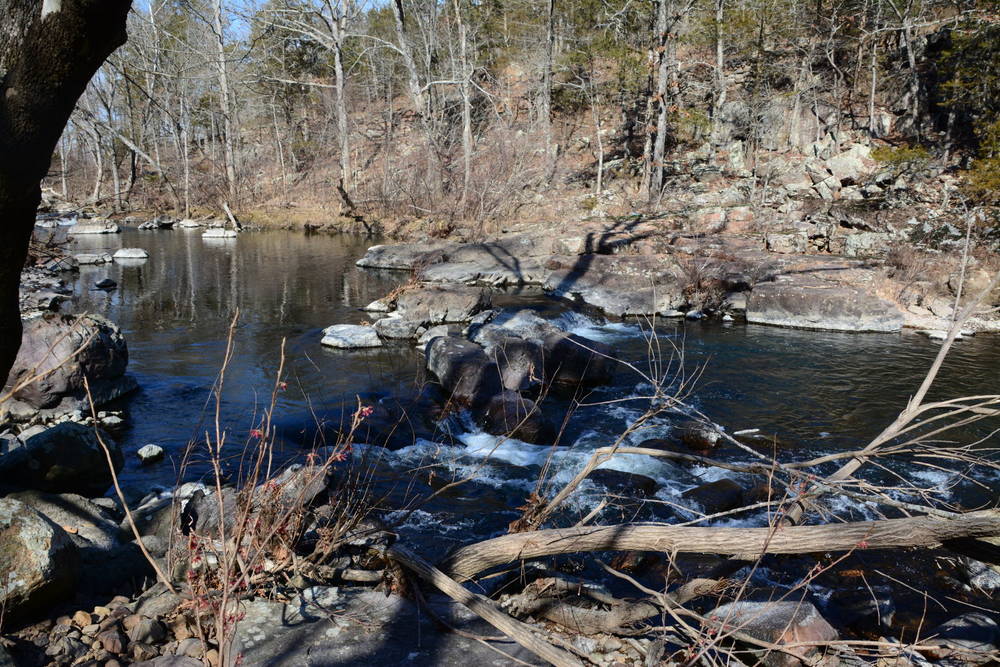 A short distance to the south, the highway bridge looms over the creek. 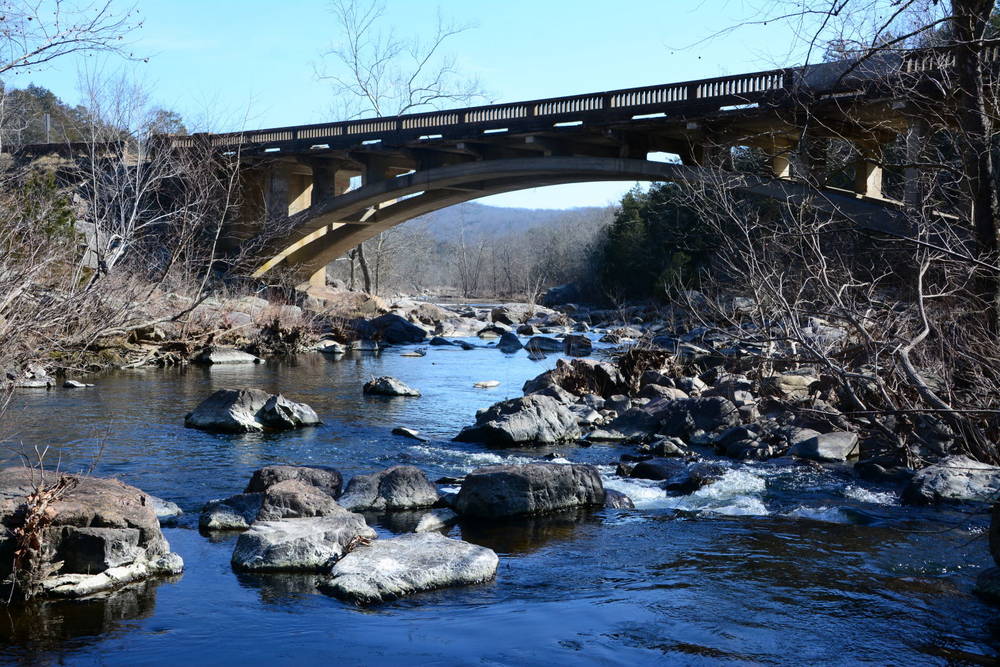 The shut-ins continues downstream from the bridge, but the land on the opposite side of the highway is private and posted against trespassing. 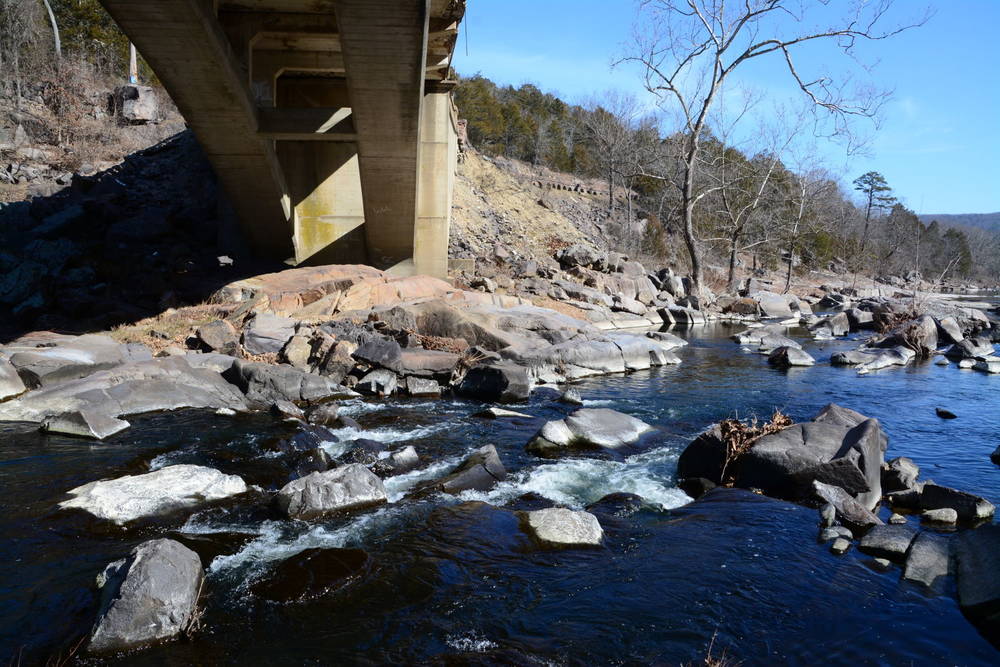 Going upstream, the creek curves to the left to reach the upper end of the shut-ins. 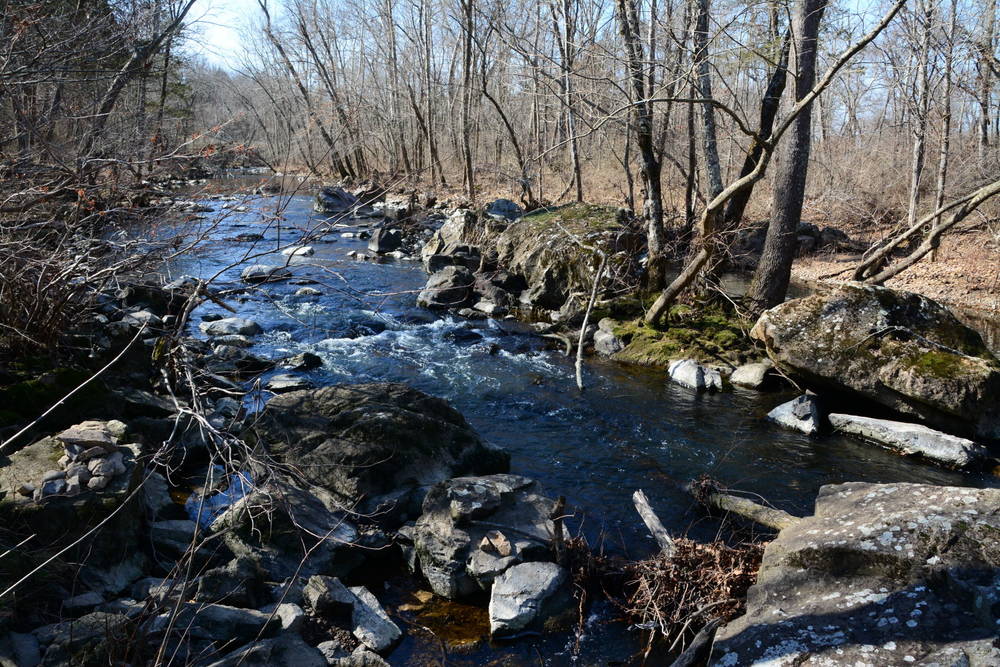 I haven't been able to track down the exact location, but somewhere in this immediate vicinity was the site of the Tong-Ashebran Furnace, the first iron furnace in Missouri. It was built circa 1816 and operated by James F. Tong and Corbin Ashebran.

Details are sketchy, but it appears that the furnace was located at the head of the shut-ins, and featured a water-wheel to power a hammer for beating the iron into shape. The raw iron came from Shepherd Mountain.

The operation closed around 1819. Tong later headed west as one of the original colonists of Texas, while Ashebran moved north to the Caledonia area and became a partner for another ironworks operation there.

A book from 1892 about the iron industry reported that debris from the furnace could still be found. That doesn't seem to be true today.

The only man-made object I could find is a set of six concrete pillars hidden by trees near the parking spot. Pieces of melted glass are clustered around the pillars, suggesting that this was a building that caught fire and burned. At any rate, it doesn't seem old enough to be associated with the ironworks. 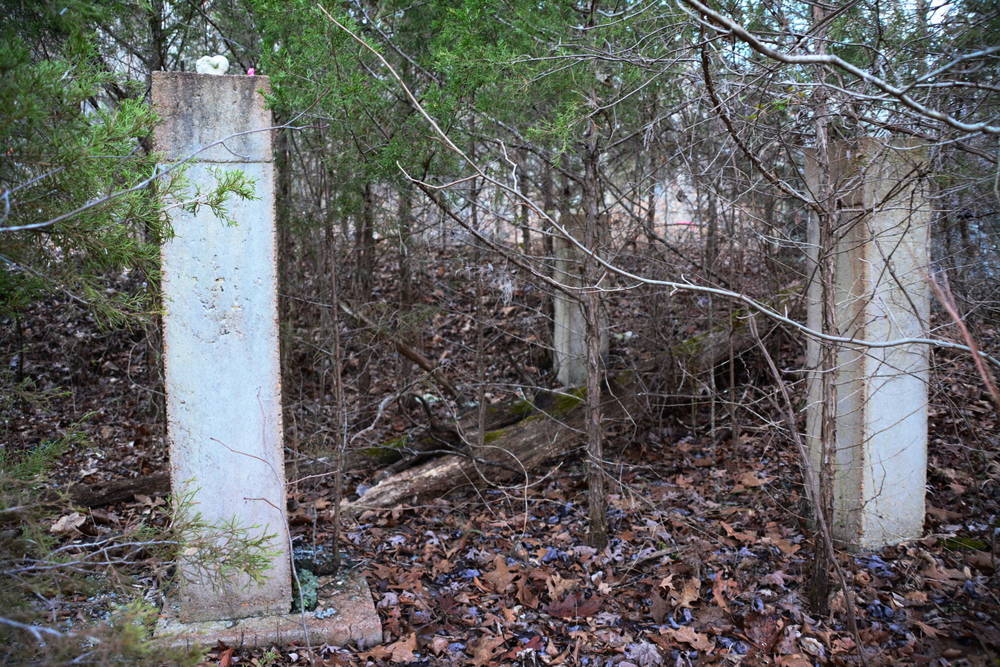 After the end of the furnace operation, Stouts Creek still played an important role as a strategic point along the Fredericktown to Ironton road. Wedged between two mountains, this location -- called Shut-in Gap -- provided the best route to enter the Arcadia Valley from the east.

This proved significant during the Civil War, as the first action in the Battle of Pilot Knob took place here on Sept. 26, 1864. An advance brigade of Confederate soldiers, approaching from Fredericktown, was able to push through the gap undetected. Later in the day the Confederates were forced to retreat back to the shut-ins, but this was only a temporary setback. That night, the Union fell back to Ironton and the Confederates were poised to attack first thing in the morning in their pursuit of Fort Davidson. 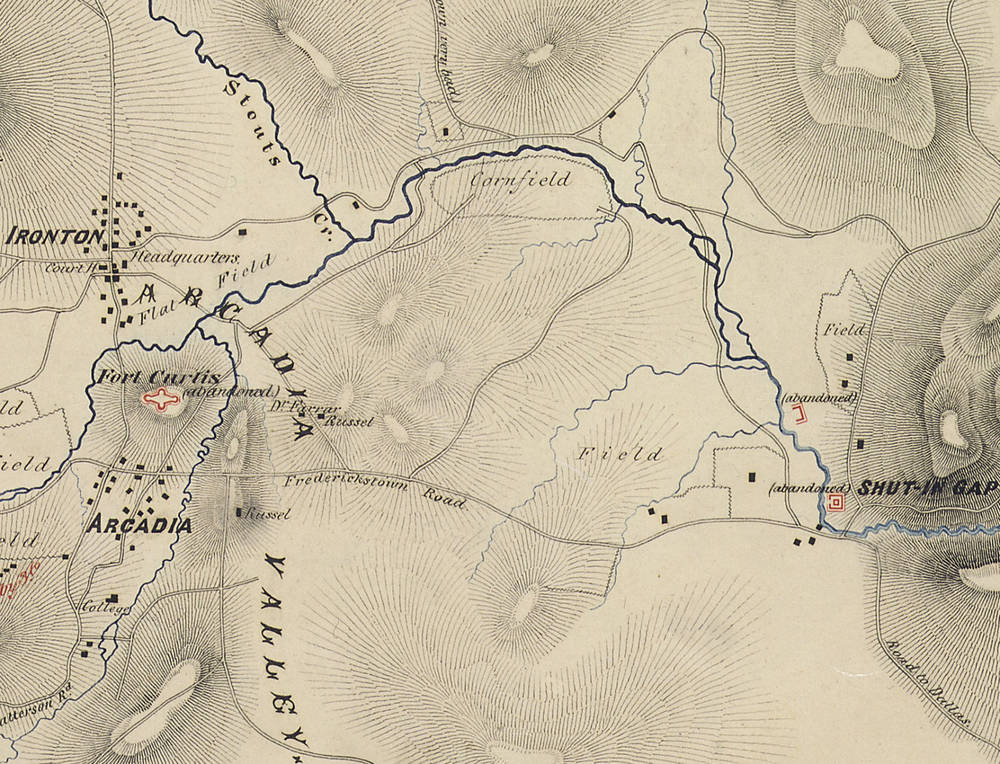 This connection with the Civil War is likely the reason that this tract of land is part of the state park system. It's a satellite property of Fort Davidson State Historic Site.

Today, the Stout Creek Shut-ins still represents a chokepoint on the road between Fredericktown and Ironton. The Missouri Department of Transportation intends to replace the historic arch bridge over Stouts Creek, but faces a challenge: there isn't room to build a new highway without disturbing the state park land. And they can't build a new bridge in the same place as the old one, as that would require a lengthy closure of Highway 72.

The bridge itself, built in 1928 and eligible for the National Register of Historic Plcaes, is a graceful structure that complements the beauty of the shut-ins (despite some vulgar graffiti underneath). It will be a shame to see the bridge replaced by some mundane concrete thing. 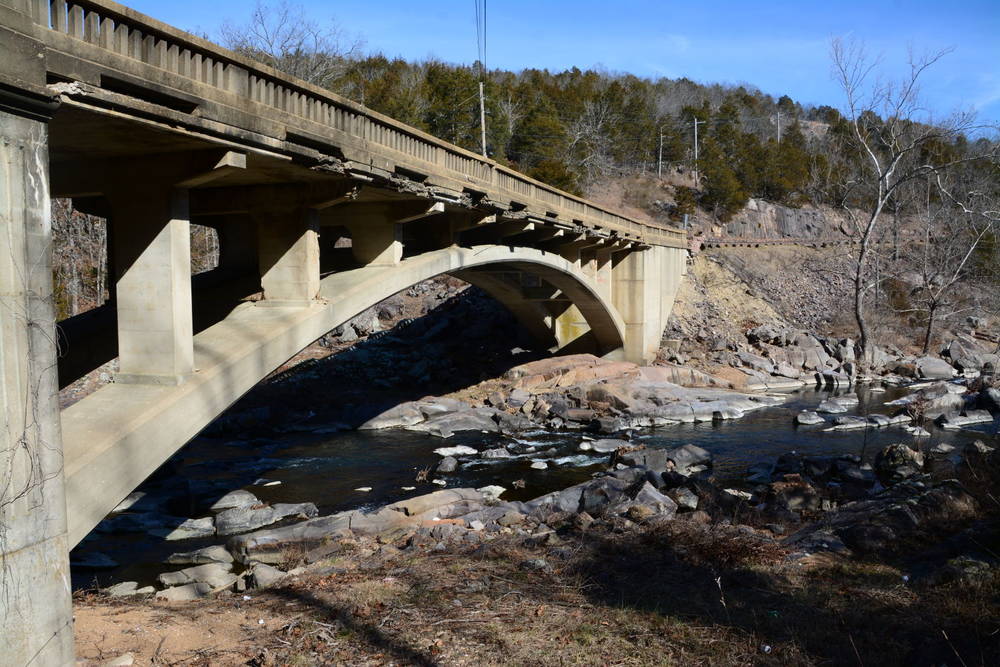 But it will also be a shame if a new bridge ruins this tiny piece of state park land. It's unclear exactly how MoDOT will proceed, so enjoy the setting while you can. All you have to do is take a few minutes to stop while passing through on Highway 72.