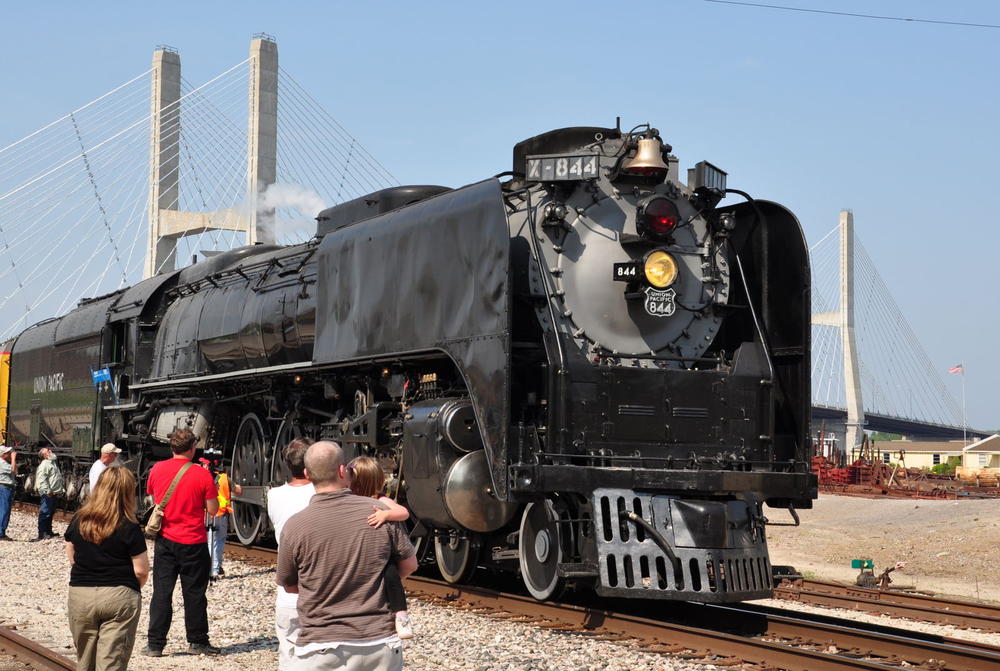 Five years ago, the Union Pacific No. 844 steam locomotive made a stop at Cape Girardeau, drawing large crowds. On Wednesday, Oct. 19, the same locomotive will be traveling through the area, but this visit will be fleeting, with only brief stops at Chester, Gorham, Wolf Lake, Scott City, and Bloomfield before spending one night at Dexter.

The locomotive is headed to Memphis for the grand opening on Saturday, Oct. 22, of the new Big River Crossing, a walkway attached to the Harahan Bridge across the Mississippi River.

Since this visit is coming on a Wednesday and not a Saturday, we likely won't see the massive crowds -- and traffic jams -- that followed the train in 2011. 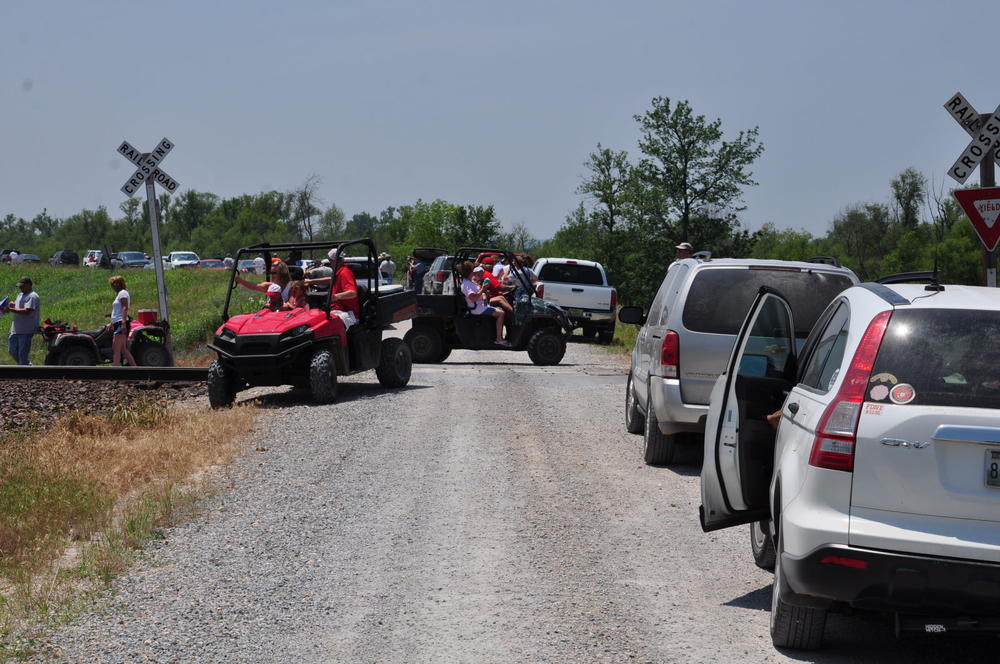 On the plus side, the locomotive is scheduled to make a stop in Scott City around 1:15 pm, so an extended lunch break might be enough to see it. If you're hoping to chase the train and get that perfect calendar-worthy photo, here are some possible vantage points:

The locomotive is expected to arrive at Chester, Illinois, around 10:30 AM and stop for a half hour. The Union Pacific station is on the south side of town near the intersection of Rock Bridge Road and Water Street (the riverfront road). An excellent photo opportunity is to catch the train crossing the bridge over Rock Bridge Road just before pulling into the station. 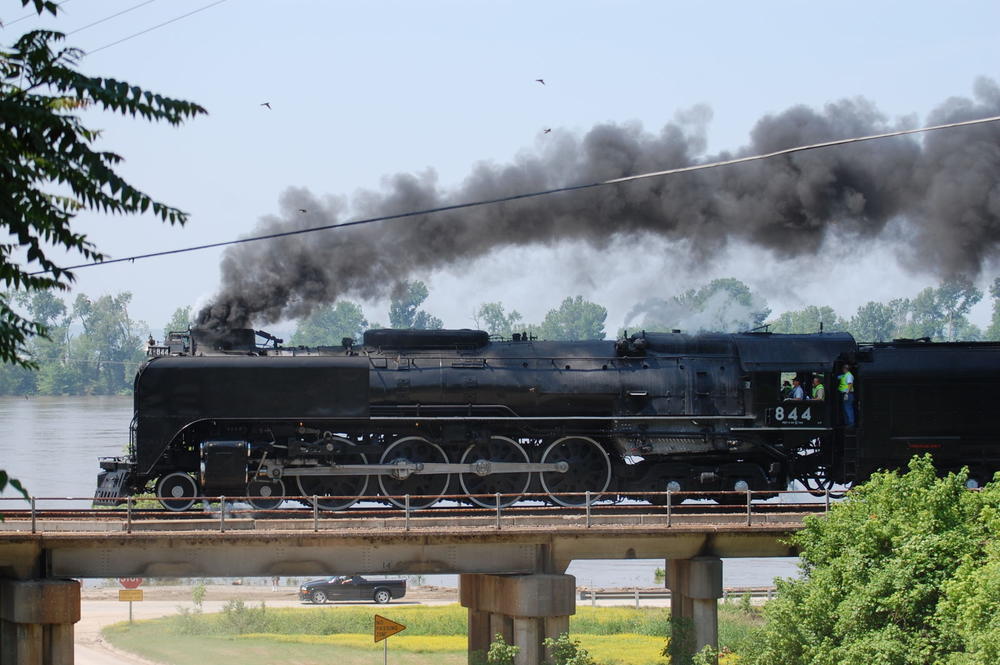 The schedule shows the locomotive pulling into Gorham at 11:30 AM for a brief 15 minute stop.

This was a very popular spot during the last visit, as a huge crowd of photographers and videographers jostled for position to capture the locomotive passing through the steel truss bridge over the Big Muddy River. The best vantage point is from the south side of the river near the railroad crossing at Muddy Levee Road (better known as the access road to LaRue/Pine Hills). Based on the schedule, the train should reach here around noon. 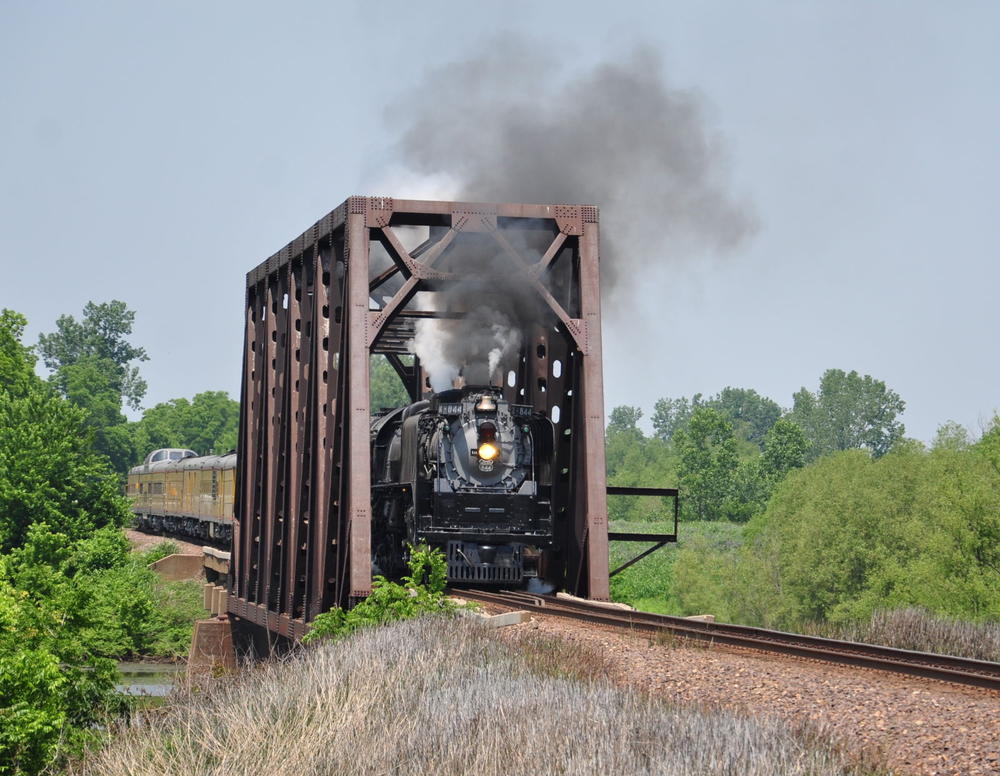 No. 844 will make another brief 15-minute stop at Wolf Lake around 12:15 PM. The stop is near the crossing with State Forest Road at the south edge of town. 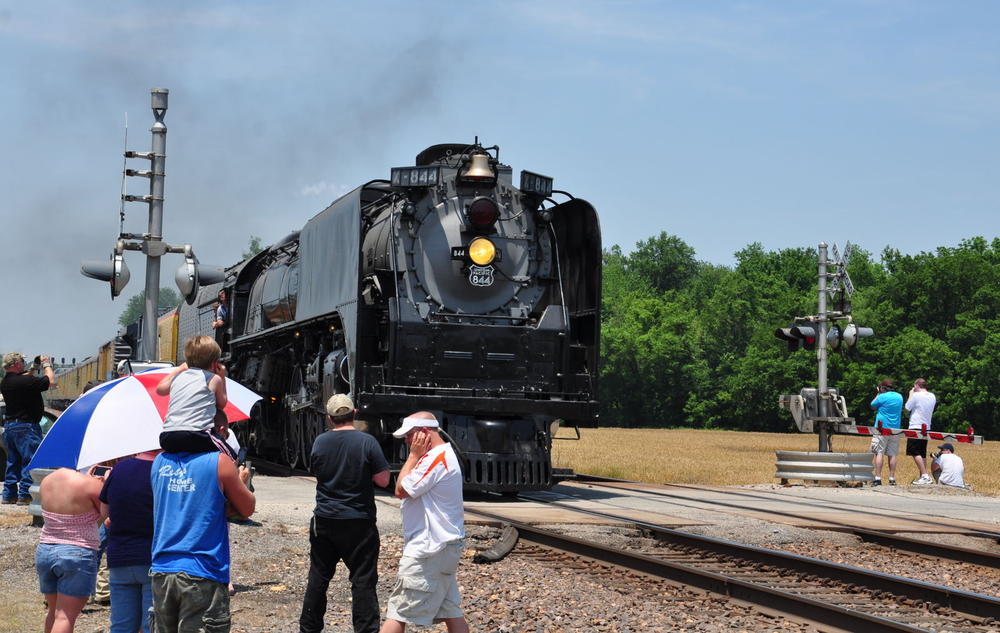 Unlike last time, the train will not make a stop at Ware. However, the old weigh station on Highway 3 does provide a safe and unobstructed view of the tracks. 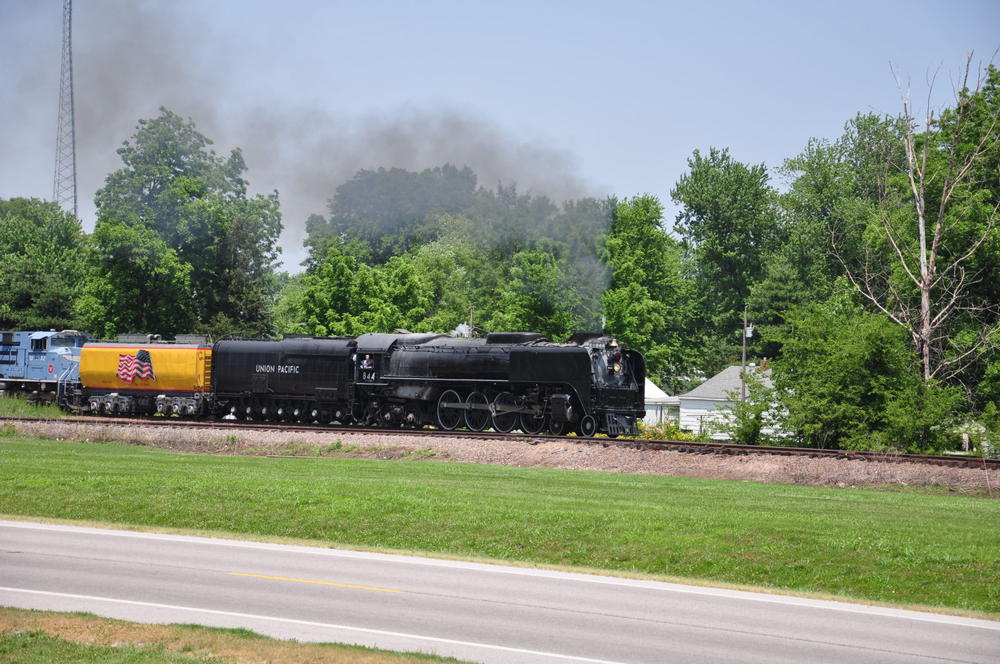 The train is expected to cross the Mississippi River at Thebes around 1 PM. Although the Thebes boat ramp provides a good vantage point of the bridge, the sun angle at the time will be unfavorable. In 2004, when another Union Pacific locomotive (No. 3985) visited the area, I tried to catch the train crossing the bridge, but I was only able to capture a silhouette. 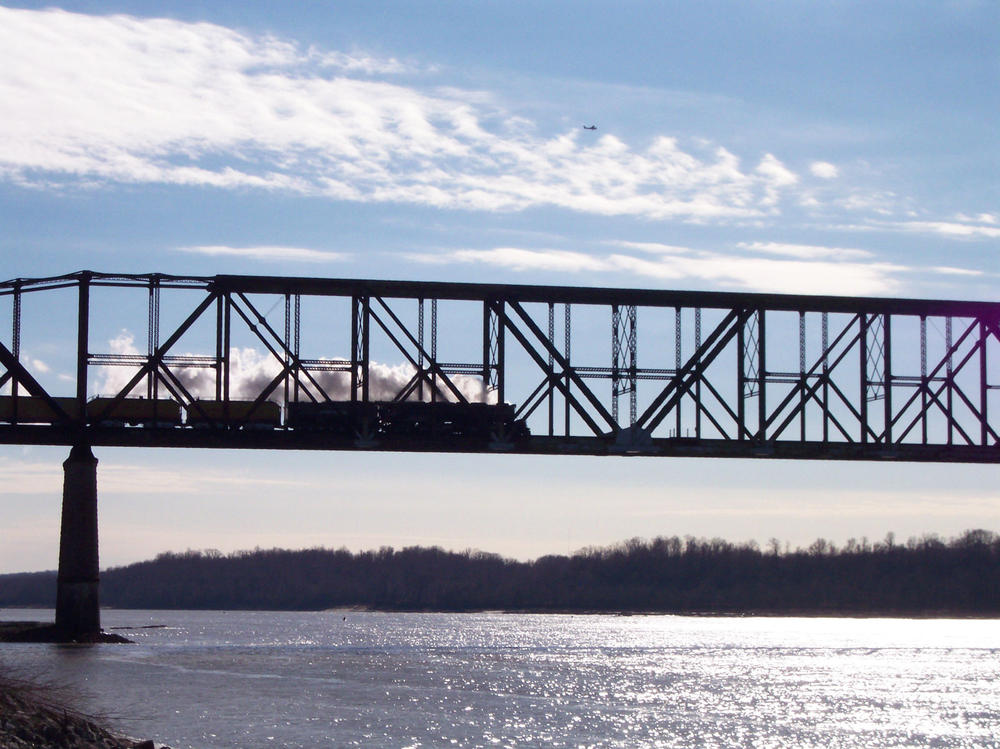 Another option is to try to hike along the river's edge to the south (sunny) side of the bridge. This works well when the river stage is low, but the water may be too high this time. 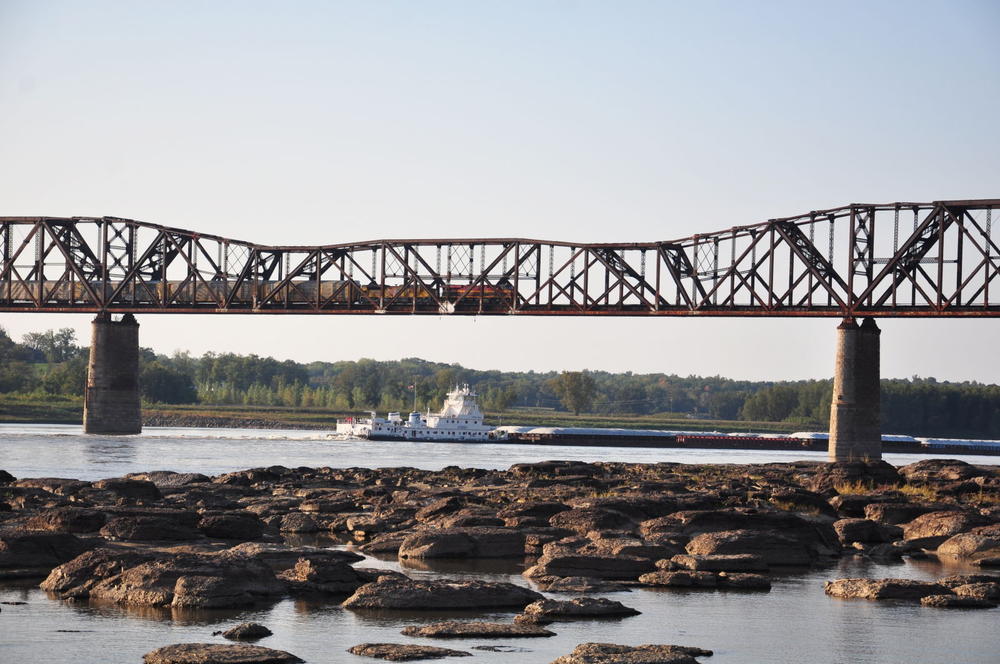 After crossing into Missouri, the train is slated to stop in Scott City around 1:15 PM for 15 minutes. The stop is at Oak Street, with convenient parking available by the old Cotton Belt caboose.

Last time, a small crowd gathered to watch the No. 844 switch tracks at Rockview Junction. Since the train isn't coming to Cape Girardeau this time, it will merely blow straight through Rockview, so this won't be as interesting. The new Rockview overpass isn't as nice for train watching, either. 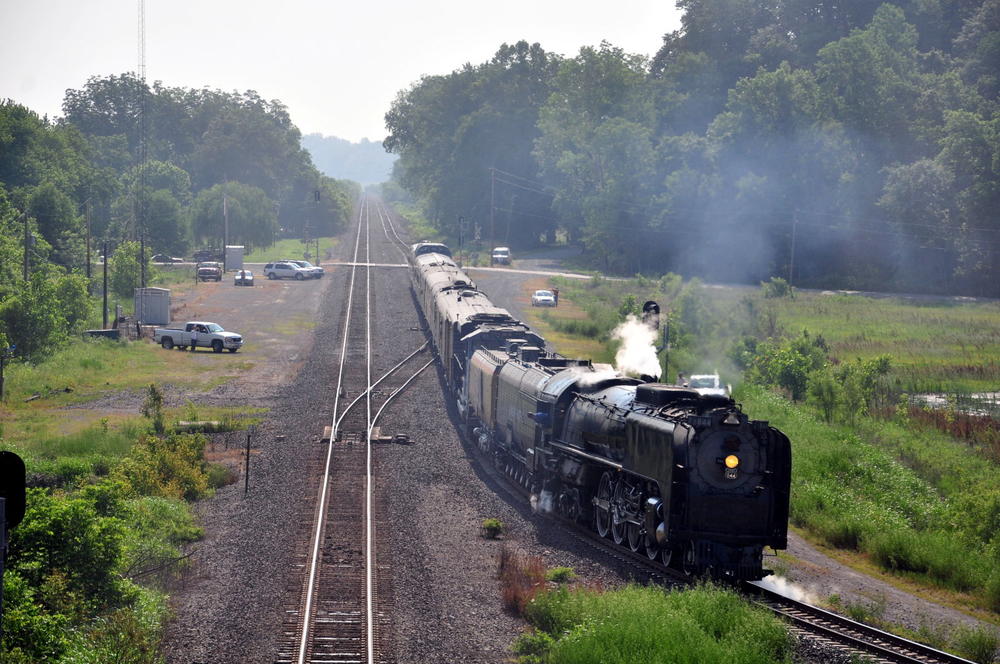 Route P between Delta and Bell City provides some photo opps as the Union Pacific tracks run parallel to much of the road. The train will pass through Bell City without stopping.

The schedule shows a stop at "Bloomfield" at 2:30 PM, but the UP station is actually between Bloomfield and Dexter on Stoddard County Road 527, a location that can be tricky to find. This is a longer stop, with the train not expected to depart until 3:45 PM.

At 4:30 PM, the train is expected to arrive at "Dexter Junction" (near County Road 708 on the east side of Dexter). It will spend the night here and then depart at 8 AM on Thursday, heading toward Memphis via Piggott and Paragould.

Note that the schedule is subject to change. In particular, these steam excursions are sometimes delayed by freight trains which have a higher priority. Mechanical issues can also interfere with the schedule. On the other hand, the steam locomotive is quite capable of high speeds, so it can make up ground in a hurry after a delay. Union Pacific's website and Twitter feed provide real-time information on the locomotive's current whereabouts.