What's up with the extra "e" in Sainte Genevieve? 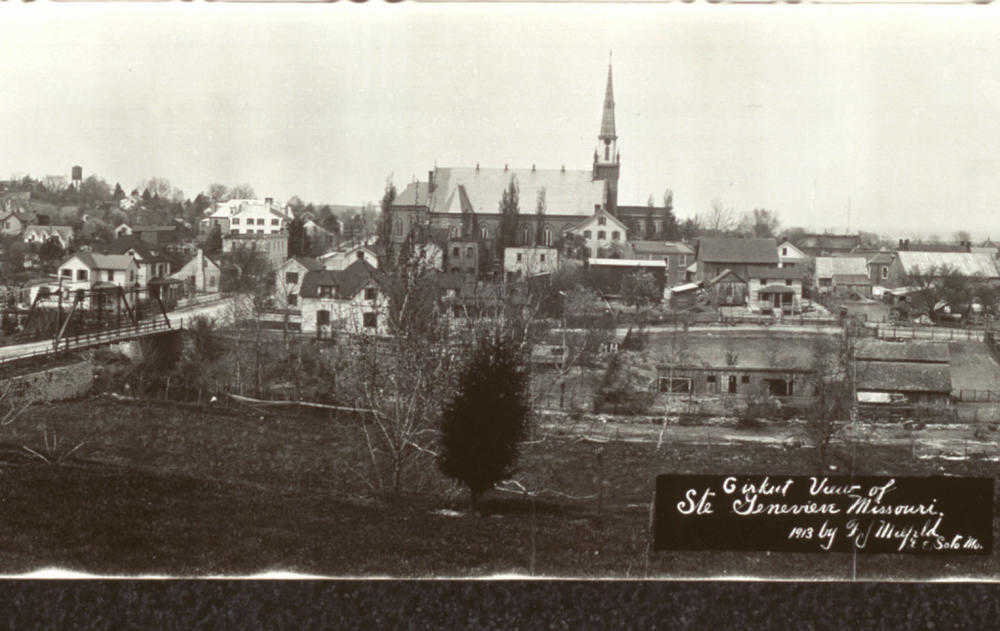 Portion of a panoramic view of Ste. Genevieve by F.J. Milfeld, circa 1913. Source: Library of Congress

Sainte Genevieve has been making headlines with a bill introduced into Congress to establish a new unit of the national park system: the Ste. Genevieve National Historic Site.

The final feasibility study, released a few weeks ago, states that the town "stands alone in terms of the character, quality, quantity, and rarity of its resources."

Of particular interest are the French-style vertical log houses. North America only has five remaining poteaux-en-terre (post-in-the-ground) buildings, and three of them can be found in Ste. Genevieve.

The town also includes another aspect of French heritage, one that is overlooked: the peculiar spelling of its name. The "e" in Sainte represents the French practice of distinguishing between male saints and female saintes.

According to the Ramsay Place Names File, the town "was named for Sainte Genevieve, patroness of Paris. She is reputed to have saved the city from Attila by her prayers in 451. She died at Paris, January 3, 512. Possibly the name was chosen because the settlement was made on or near her feast day; more probably it was selected in honor of the capital city of the native land of the original settlers. The abbreviation 'Ste.' preserves the French feminine form 'Sainte.'"

Only two other towns in the United States have a "sainte-with-an-e" name: Sault Sainte Marie in Michigan and Sainte Marie in Illinois. An exhaustive search of the national placenames database, however, reveals a small but widespread collection of "Sainte" names for other landmarks, including lakes, parks, churches, parochial schools, and cemeteries. Many -- but not all -- of these names are associated with areas that had a French influence, especially Louisiana and Michigan.

Looking at maps of Canada, it's clear that "Sainte" names are popular in French-speaking Quebec. The region north of Montreal, for instance, includes such poetic names as Sainte-Anne-des-Plaines, Sainte-Agathe-des-Monts, and Sainte-Mercelline-de-Kildare. Montreal has a neighborhood called Sainte-Geneviève, which was a separate village until annexed by Montreal in 2002.

France itself also has Sainte names, including Conflans-Sainte-Honorine, a town on the outskirts of Paris, and Rue de le Montagne Sainte Geneviève, a street in Paris named for the city's patron saint... er, sainte.

The early history of our own Ste. Genevieve is sketchy, but the name does appear on maps from at least the 1750s. Covens & Mortier's 1757 map of North America, for example, clearly shows the settlement spelled Ste. Genevieve. 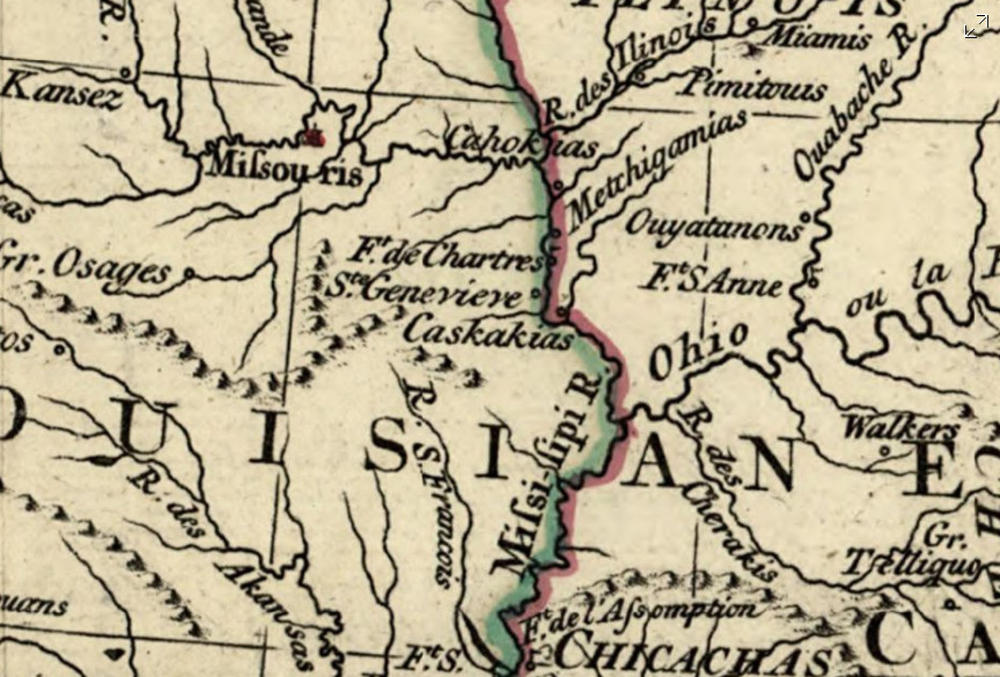 Later maps, however, sometimes substituted another name: Misere. This nickname meant "poverty" or "misery." This name, and not Ste. Genevieve, appears on a 1775 map of the Mississippi River. 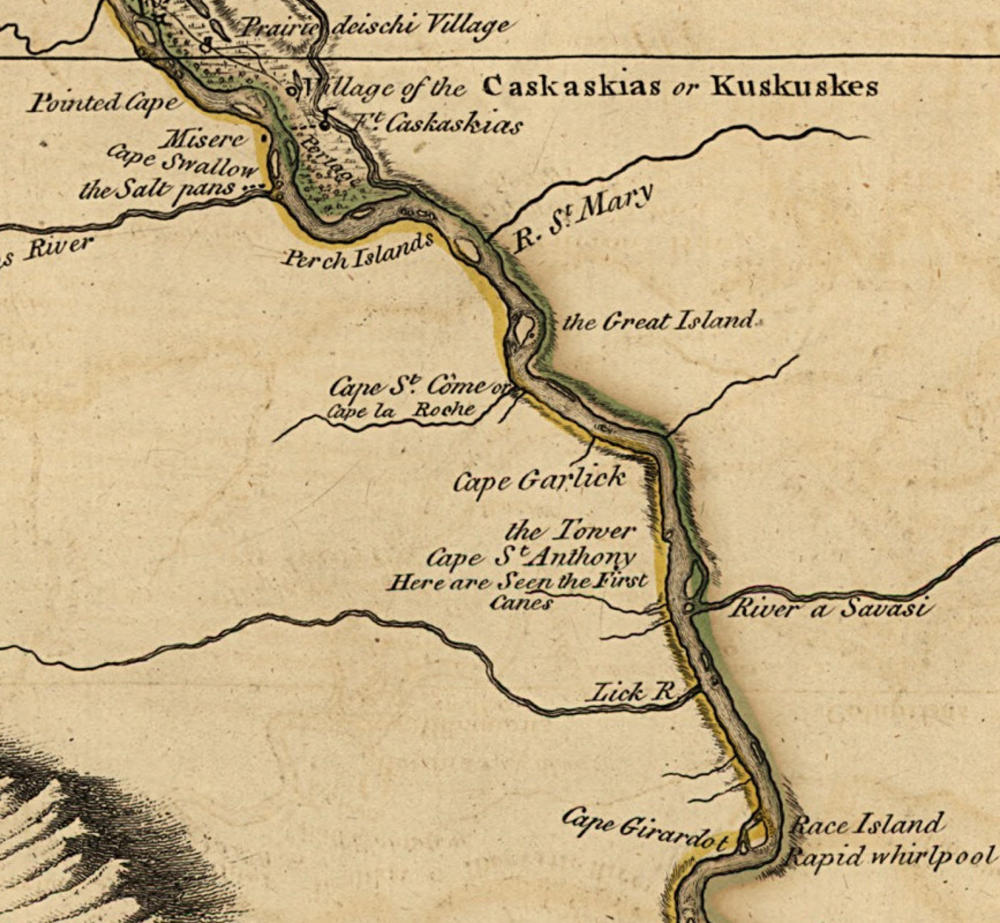 Curiously, other French settlements had derisive nicknames, including "Pain Court" (short of bread) for St. Louis and "Vide Poche" (empty pocket) for Carondelet.

When Spain took over control of the region from France, the name of Ste. Genevieve continued to be used, although some official documents used the Spanish equivalent, Santa Genoveva.

Then, after the United States took possession of the territory as a result of the Louisiana Purchase, most maps "Americanized" the name. J. Calvin Smith's map of 1844 shows both the town and county spelled as St. Genevieve. 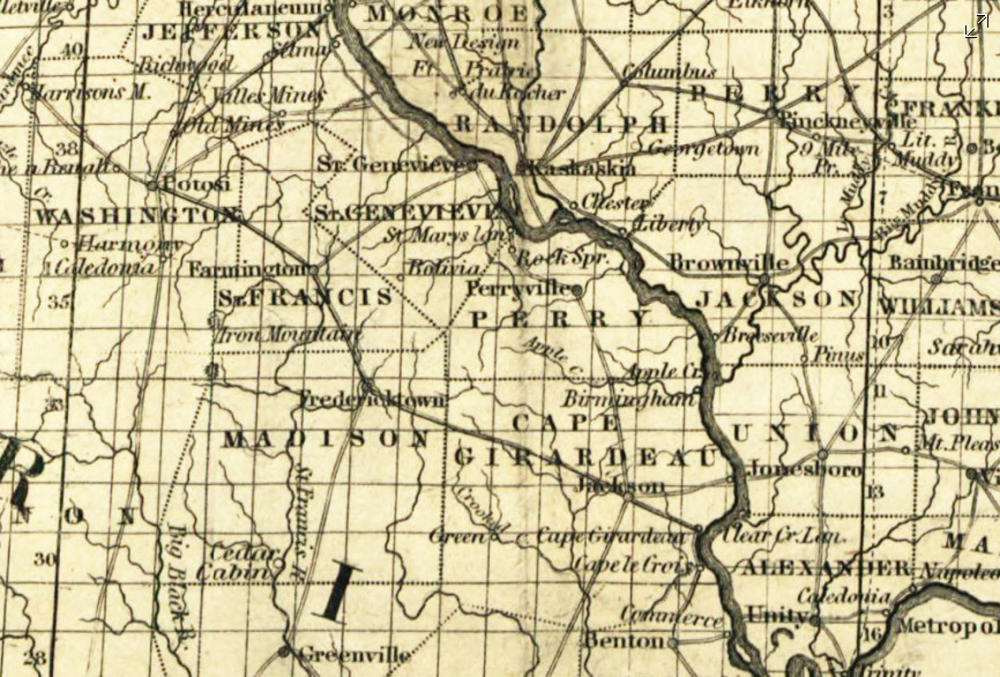 Around the Civil War, the extra "e" started reappearing occasionally on maps. Then, by the turn of the century, Ste. Genevieve had become the dominant spelling again, and has remained to this day.

That extra "e" in the name might look funny. It might cause confusion when it comes to alphabetical order. And to be pedantic, the name in French would have an accent mark and a hyphen -- Sainte-Geneviève. But the town's current spelling is close enough, and it does preserve a tiny piece of French heritage.

If a national park unit is established, tourism should increase -- as well as the number of times people ask, "What's up with the extra "e" in Sainte Genevieve?"