It could be the stuff of a Dan Brown novel. Two different people uncover evidence that a U.S. President had a youthful indiscretion producing a child out of wedlock, but both researchers die before they can publish their findings. Rumors of the presidential dalliance continue to swirl despite the lack of hard evidence.

The president in question is none other than George Washington. If the legend has any truth to it, Washington was the father of Thomas Posey, a Revolutionary War hero buried in Southern Illinois. Posey's grave can be found at the picturesque Westwood Cemetery near Old Shawneetown in Gallatin County. 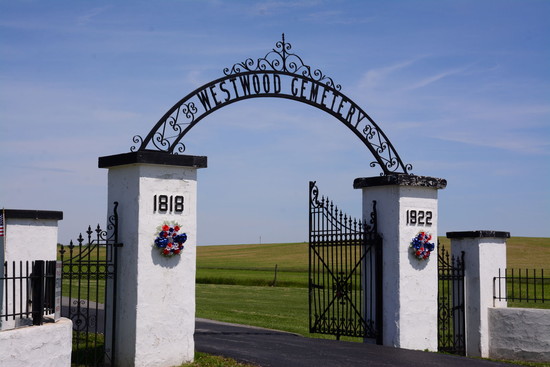 His tomb announces that he was an "honest man" and a "pious Christian." A modern historic marker summarizes his life as "Patriot - Soldier - Statesman." 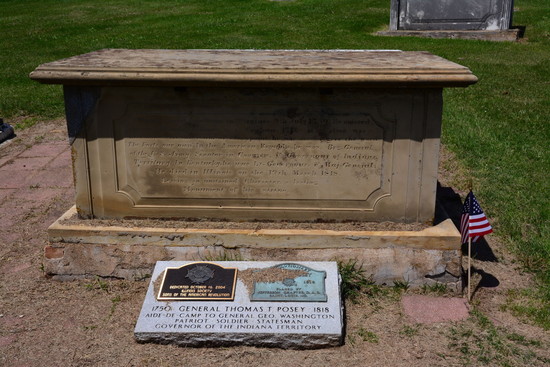 Even without the Washington connection, Posey led a fascinating life. His exploits during the war, including courageous feats of hand-to-hand combat, are well documented. He later served in a variety of public offices: speaker of the Kentucky state senate, lieutenant governor of Kentucky, U.S. senator from Louisiana, territorial governor of Indiana, and Indian Affairs agent for Illinois territory.

An early biography published in The Port Folio (1824) included an excessive number of superlatives describing Posey, almost bordering on the ludicrous. Here is how a portion of the article described him:

In his person, General Posey was tall, athletic, and finely formed. His appearance united dignity and gracefulness, and in his manners were blended in a remarkable degree the stately and gallant bearing of the soldier, with the ease and suavity of the polished gentleman. His face was remarkably handsome, his features high, fine, and prominent, and if at times they assumed the sternness of command, there was a softness in his fine blue eye, a spirit and intelligence mingled with a calm and benevolent expression which pervaded the whole countenance, that at once attracted the admiration and won the affections of the beholder.

In private life General Posey was cheerful, social, and benevolent, performing the various duties which devolved upon him as a member of civil society and strict punctuality, and with a right attention to the privileges and feelings of his fellow men. His principles, drawn as they were from the purest fountains, formed among the severest trials of patriotism, and modelled upon the highest examples of political virtue which have adorned any age or country, were purely republican.

A subsequent biographical sketch in The Library of American Biography (1846) repeats the same gushing praise, particularly about Posey's handsomeness. The article added this note: "We should not allude to a subject so apparently unimportant, if it were not that the personal appearance of this distinguished gentleman, both as to form and feature, were so attractive as to be subject of general remark wherever he was known."

It was this "attractive" appearance that apparently spawned the George Washington rumors, as some old-timers in Indiana thought that the portraits of Posey looked similar to Washington. It didn't help that Posey's childhood remained a complete enigma. In his own memoirs, Posey merely stated that he was "born of respectable parentage near the Potomack in Virginia in the year 1750, 9th of July." So helpful!

When an official portrait of Gov. Posey was hung at the Indiana statehouse, the rumors boiled to the surface. A story entitled "Was Geo. Washington a Father?" appeared in the Cincinnati Daily Commercial on March 28, 1871, followed by another story on April 10 with the headline "The Paternity of Governor Posey, of Indiana: A Man Who Looked Wonderfully Like George Washington." 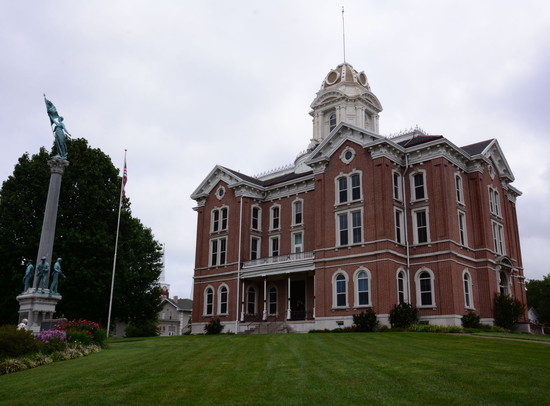 Posey County, Indiana, was named for Thomas Posey. Coincidentally, the courthouse is located in the town of Mount Vernon, Indiana.

Residents of Shawneetown, Illinois, the final home of Posey, also reportedly believed in the Washington-Posey connection. The St. Louis Globe-Democrat ran an article in which a correspondent interviewed people around Shawneetown about the legend. This newspaper isn't available online, but the Los Angeles Herald reprinted a version of the Globe story on July 17, 1887, and that publication can be found online.

The article explained, "Some of the oldest and most estimable citizens of Shawneetown were talked with in regard to this tradition of the parentage of General Posey. The had heard it as far back as they could remember, and with such positiveness that they looked upon it as veracious, although unwritten history. There was no question, they said, but that those who lived in Shawneetown when Posey did regarded him as the son of Washington. One fact in the way of corroborative testimony was the striking resemblance in form and feature."

Next the article quoted the Posey family physician: "There is no doubt in my mind that General Posey was the son of George Washington. His family so understood it, and I received my impressions from the ladies of the family. They were rather reluctant to speak of the subject, as it seemed to be the understanding among them that it should not be talked about."

In conclusion, the correspondent wrote, "The Shawneetown tradition must stand as such. It has no record of birth or published history to rest upon, but it is none the less interesting."

The widespread newspaper coverage helped ensure that the Washington-Posey rumors continued to thrive. The trouble, of course, is that nobody had given much thought to the identify of the woman who could have been Washington's love interest and Posey's mother.

The director of the Smithsonian Institute, Dr. George Brown Goode, reportedly drafted a manuscript entitled "Reasons For Believing That Gen. Thomas Posey Was The Son Of George Washington." The existence of this document was mentioned in Globe-Democrat stories, but Goode's promising career was cut short when he died of pneumonia at age 45, and the manuscript has since disappeared.

The Globe-Democrat interviewed one descendent of Posey, a George Wilson of Lexington, Missouri, who was adamant that the Washington connection had no evidence to support it. He later changed his tune, however, following research he had done at the courthouse in Vincennes, Indiana. In a story in the Indianapolis News on Feb. 25, 1905, Wilson revealed that he had identified the mother -- Elizabeth Lloyd -- who had died soon after Thomas Posey was born.

Before this research could be published, however, Wilson died, and the source of the Elizabeth Lloyd name died with him. Although the deaths of Goode and Wilson can only be considered frustratingly coincidental, it wouldn't be hard for a novelist like Dan Brown to concoct an elaborate conspiracy theory in which shadowy forces are aligned to make sure that dark secrets about the Founding Fathers aren't exposed.

In later years, researchers pushed back against the legend. John C. Fitzpatrick, director of the Library of Congress, wrote an article for Scribner's Magazine in 1927 called "The George Washington Scandals" in which he tried to debunk several rumors attacking Washington's character.

Without mentioning Posey by name, Fitzpatrick wrote, "But one particular lad has been selected from the many on account of an alleged physical resemblance, and in this we encounter the quintessence of inexcusable incredulity. Wise shaking of heads appears at this point; old ladies and old men have remembered this and that; all of the familiar stage effects are present, and all of them, as usual, are worthless as proof."

Another writer, Rupert Hughes, also addressed the the Posey story in his 1927 biography of George Washington. Hughes referred to it as a "persistent fable" and added that a "discussion of such a story seems to be justified by the fact that it is whispered everywhere."

A good modern treatment of the subject is a lengthy and well-footnoted article from 1990 in the Indiana Magazine of History by John Thornton Posey, a descendent of Thomas Posey.

In the conclusion, the author admitted, "But the burden of proof falls, necessarily and rightly, on the proponents of the alleged Washington-Posey paternity scenario, and after decades of gossip at Hoosier firesides and log rollings, followed by a century of printed argument and speculation, the evidence at hand simply does not bear out their contentions."

Perhaps the best one-line summary of the situation is from historian William H. English who wrote in 1895 that Posey was "a man who acted well in part in both war and peace, and about whose life lingers much interesting romance, which will probably never be fully unveiled."

Not all mysteries remain mysteries forever, though. The 29th president, Warren G. Harding, was long rumored to have had an affair that produced a daughter, a story revealed in a tell-all book that was adamantly denied by his family. However, modern DNA testing has confirmed that the purported daughter was, in fact, his natural child.

So there's hope that other Presidential mysteries can be solved at some point. Until then, the Posey-Washington legend, unconvincing as it is, remains a curious part of regional lore.

The Library of American Biography (1846) by Jared Sparks, Volume 19

For Virginia and for Independence: Twenty-Eight Revolutionary War Soldiers from the Old Dominion (2011) by Harry M. Ward