Over the years, we've seen numerous ideas floated for how to improve the traffic congestion in the center of Jackson, but very little action.

That's not necessarily a bad thing. Making changes to the streets around the courthouse -- whether this involves roundabouts, stoplights, blocking streets, or tearing down a perfectly good county administration building -- may only provide limited relief for Jackson's traffic woes.

Let's face it: the street grid throughout Jackson makes little sense. Many parts of town are difficult to reach from other parts without going through the congested center of town.

Barriers in every direction

Looking at a map of Jackson, it's easy to spot several large tracts of land that form barriers that are impossible to cross by road. I've annotated these demarcation lines in purple (click to enlarge). 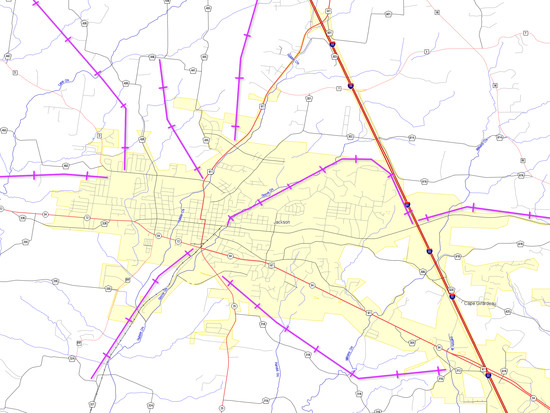 The most obvious barrier is on the northeast side of town along Goose Creek. North of Main Street, the creek is impossible to cross except at Interstate 55, which isn't very helpful for local traffic. Indeed, this barrier extends beyond Goose Creek and Bent Creek Golf Club and continues all the way to Route W. Drivers wanting to traverse the northeast quadrant of Jackson have two inconvenient options: take Main Street to the center of town, or follow I-55 up to Fruitland and backtrack.

To the southeast, Kimbeland Country Club anchors a large chunk of ground forming a blockade south of Jackson Blvd. Meanwhile, to the southwest of town, Goose and Hubble creeks represent a lengthy obstruction between Route PP and Highway 25.

Finally, the northwest quadrant of town isn't much better. The only available "bypass" is to follow Route D, Broadridge Drive and West Lane, doglegging through a series of school zones with speed limits that change every block.

The advantage of being a county seat

Historically, road construction in rural Missouri was focused on connecting county seats. This put Jackson at the hub of a regional network of roads that radiated out toward six other county seats: Perryville, Benton, Bloomfield, Marble Hill, Fredericktown, and Farmington. Two of these connections are still recognized by local road names (Farmington Road and Benton Road). Moreover, Old Toll Road on the west side of town is a vestige of the toll road to Marble Hill.

In addition to these towns, Jackson was also linked to important landings on the Mississippi River: Neelys Landing, Greens Ferry, Bainbridge, and (of course) Cape Girardeau. Three of these routes -- Greens Ferry Road, Bainbridge Road, and Old Cape Road -- still survive, in some form, on modern maps. 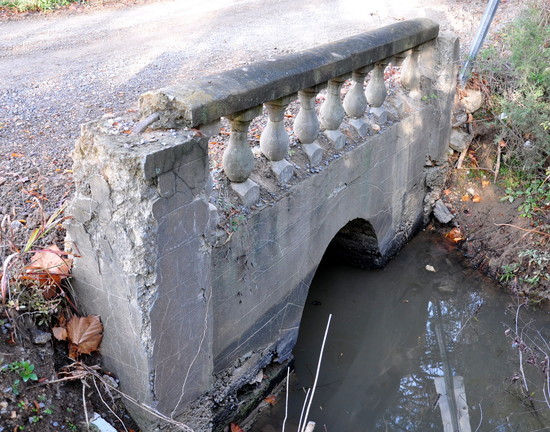 By the Civil War, Jacksonians had no less than 10 different routes to choose from, as depicted on a map from 1862: 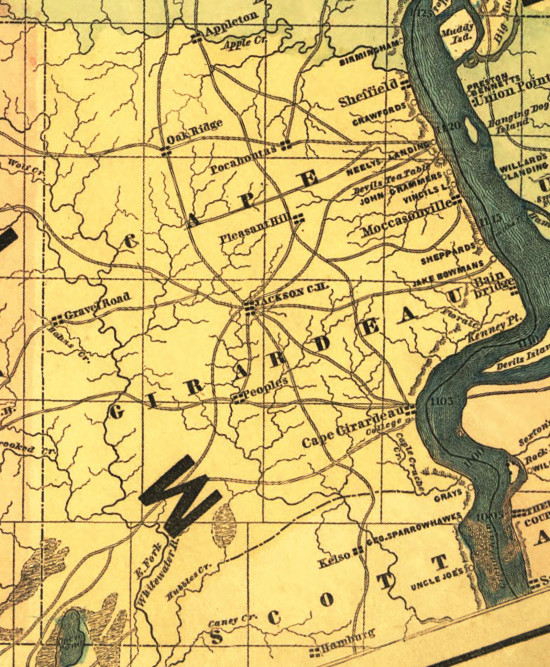 Jackson's basic road layout hasn't changed much since those days. Indeed, the Highway 34/72 split west of town -- always an irksome intersection -- is reflected almost exactly in the Civil War map. Back then, the roads to Fredericktown and Dallas (now Marble Hill) also split just past Cane Creek.

The upshot of this history is that Jackson has always been at the center of an extensive hub-and-spoke system of roads. To borrow an ancient phrase, "all roads lead to Jackson." This is good for commerce, but it brings a serious downside: traffic is directed to the hub, creating a congested choke point.

A dead end for cul-de-sacs

Like many towns, Jackson's early downtown streets were laid out in a grid, but post-War development gravitated toward constructing loops and cul-de-sacs. At first, this seems like a win-win strategy: homeowners prefer quiet streets without any through traffic, and developers don't want to build any more connecting streets than necessary.

One major disadvantage, however, is that this approach creates subdivisions that are poorly connected to the rest of town. So, even though many miles of new streets have been platted to accommodate Jackson's explosive population growth, these streets have done little to overcome the large gaps and barriers in the overall road system left over from the 1800s.

This is certainly not a unique trend for Jackson, and thankfully things aren't nearly as absurd as other parts of the country. For example, take Orlando, Florida: one amusing blog highlights two houses that have adjoining backyards, but are located in two separate subdivisions that require a seven-mile circuitous route to drive between them. The first comment posted to the blog then points out a much crazier example in Arizona.

In Virginia, the situation got so ridiculous that a statewide policy discouraging cul-de-sacs was adopted in 2009, requiring new subdivisions to include ample connecting roads. New York Times Magazine summarized the decision:

Nothing divides suburban developers and "smart growth" advocates as much as the lowly cul-de-sac. The real estate community loves the meandering, dead-end streets; lots on them sell quickly and at a premium, thanks to their low traffic and perceived safety benefits. But critics complain that cul-de-sacs are a poor use of land; they funnel cars onto clogged arterial routes and restrict access to neighborhoods when emergency vehicles need to respond.

Meanwhile, over at Jackson's biggest rival

Cape Girardeau has also wrestled with suburban sprawl and traffic bottlenecks, but the overall street grid isn't as fragmented. Lexington, Mount Auburn, Southern Expressway, and Sprigg combine to form a circular route around town. This was recognized in the city's 1987 comprehensive plan, which called for extending Lexington and North Sprigg streets to augment the ring road system. This took years to complete, but has proven invaluable by connecting existing and future subdivisions. 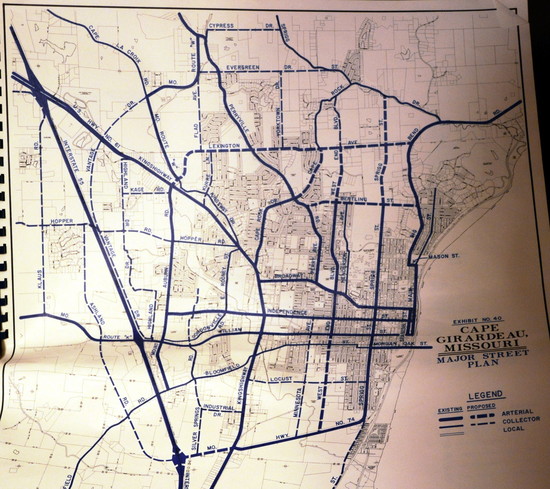 In fairness, people living on the older stretches of Lexington or Mount Auburn probably weren't too keen on seeing their side street transformed into an arterial thoroughfare. Nevertheless, it's not feasible for every street to be a quiet street -- traffic has to go somewhere.

Jackson needs to take notes. Redesigning the courthouse square strikes me as a band-aid fix for a deeper problem. To ease citywide traffic congestion and allow for future growth, Jackson will need to do two things:

1. Build connecting roads to remove the barriers between sections of town

We don't want to let the "City of Beautiful Homes, Parks, Schools and Churches" turn into the "City of Places You Can't Get To From Here."