We all know that Jackson, Missouri, was named for Andrew Jackson.

But the real question is: why? As we celebrate Jackson's bicentennial year, this question has been nagging me.

When researching the origins of town names in Missouri, my first stop is the Ramsay Place Names File. Robert L. Ramsay, a professor at the University of Missouri, dispatched his students in the 1930s and 40s to collect information on place names from every county in the state. Mayme L. Hamlett, assigned to cover Cape Girardeau and five other counties, had this to say about Jackson:

The county seat, located in the south-central part of the county, in the east-central part of Byrd Township. The town, the second in the district, was laid out in 1815 on land that was granted to Ezekiel Able by the Spanish government, and was transferred by him to William H. Ashley. The commissioners appointed in 1814 to locate a permanent seat of justice for Cape Girardeau County. Purchased the land from Ashley. Three names were suggested for the town: Ashley, Byrd, and Lorimier, for prominent local men; but since it was established in 1815 just after the Battle of New Orleans, the town was named in honor of Andrew Jackson. It was incorporated in 1819.

The Battle of New Orleans was indeed the defining moment in Andrew Jackson's life, a celebrated victory that would -- for better or worse -- propel him to the Presidency. After Jackson triumphantly "caught the bloody British in a town in New Orleans", it would make perfect sense for our town fathers to honor him.

But there's a slight problem. As Jackson mayor Barbara Lohr explained in a newspaper column, records indicate that the name Jackson was chosen on July 4, 1814, a half year before the battle. 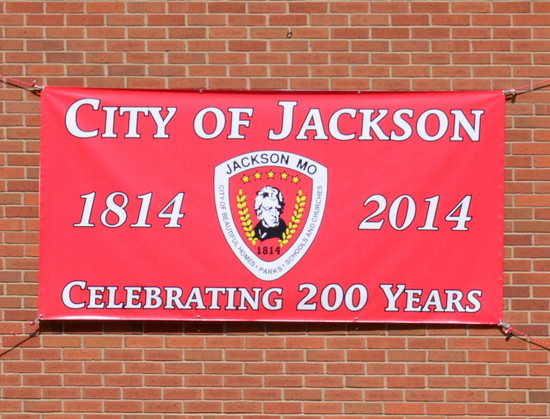 At that point, Andrew Jackson's hot temper and tendency to engage in duels had tarnished his reputation and hurt his political career. However, his personality served him well in a new chapter in his life as a military general. As Major General of the Tennessee militia, he had overseen a series of victories against the Creek Indians in Alabama. Following his success, he was commissioned as a Major General of the U.S. Army on May 28, 1814. This was a significant promotion, and set the stage for his heroics at New Orleans the following January.

His promotion and victories would have been taking place at the same time that the town fathers were choosing a name. Headlines, however, didn't always travel very fast in those days, and it's hard to say whether Jackson's military exploits in Alabama would have been enough to capture the attention of Missourians.

A newspaper story from 2000 in the Jackson USA Signal offered an explanation: "For the Tennessee immigrants who made up a good percentage of the early Jackson residents, Old Hickory had already established an admirable record."

Andrew Jackson was certainly well known in his home state. He had served as a U.S. Representative and Senator from Tennessee, as well as a judge of the state supreme court.

With that in mind, I wondered if any of the prominent families of Cape Girardeau County in 1814 had connections to Tennessee and Andrew Jackson. After going down the list of the people involved with the founding of Jackson or the early history of the county, one name stood out the most: the Byrd family.

Led by father Amos Byrd, the family moved from Tennessee to the Cape Girardeau area in 1799, settling along the upper reaches of what would be called Byrd Creek. Soon after arriving, Amos and his sons, particularly Abraham, Stephen, and John, would leave their fingerprints all over local politics.

In 1813, the territorial legislature appointed five men, including Abraham Byrd, to a commission to establish the new Cape Giradeau County seat. After meeting in Feb. 1814, they decided to obtain land from William H. Ashley, James Mills, and others, to establish a new town and sell lots to finance the first courthouse and jail. As one of the commissioners, Abraham Byrd would have been in a key spot to suggest the name for the county seat. 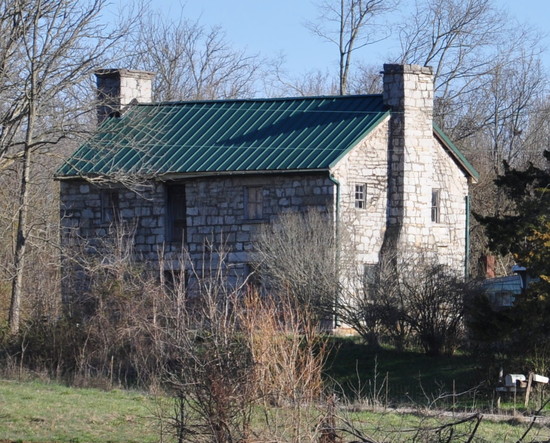 So was there a personal connection between the Byrds and Andrew Jackson? I found one tantalizing piece of evidence: a letter written by Andrew Jackson that was delivered by one "Capt. Emus Bird." The letter was addressed to Robert Hays, a brother-in-law and close friend of Jackson's, and it appears that Jackson arranged for the captain to deliver it. Even with the peculiar spelling, this appears to be the same Amos Byrd that moved to Missouri (he earned his title of captain from service in the Revolutionary War). In "The Papers of Andrew Jackson: 1770-1803", a footnote to this letter identifies the person as Amos Byrd.

One sticking point is that the letter is dated July 13, 1800, nearly one year after the Byrds had relocated to Missouri. However, it's possible that Amos was traveling back to Tennessee to wrap up business, and then crossed paths with Andrew Jackson. At any rate, the letter suggests that Amos Byrd was enough of an acquaintance for Jackson to ask him the favor of delivering this piece of mail, while at the same time not enough of a friend for Jackson to know how to spell his name.

It's possible that additional research will turn up more connections between the Byrds and Andrew Jackson while they were living in Tennessee. Although we may never know for sure, it's conceivable that Abraham Byrd first suggested the name Jackson, or at least argued for it based on his family's acquaintance with Andrew Jackson.

Following the Battle of New Orleans, it became quite fashionable to name cities, counties, townships, parks, lakes, schools, etc., after Andrew Jackson. Twenty-one states have a county named for him (and Missouri has two: Hickory County is based on his "Old Hickory" nickname). Only George Washington, Thomas Jefferson, and Benjamin Franklin have more counties to their credit.

Jackson, Missouri, was certainly ahead of the curve, beating out all other Jackson placenames -- except for one. Jackson County, Tennessee, had already been named for him way back on Nov. 6, 1801. Nevertheless, among cities and towns, our own Jackson was apparently the first, perhaps with a little help from the Byrds.