Log house on Fountain Street: It's do or die time

I've written before the discovery of a log house at 818 N. Fountain Street, previously hidden beneath a mundane exterior.

This isn't the first time something like this has happened in Cape Girardeau.

In 1994, the city condemned a house at 127 S. Frederick Street. Demolition proceedings were temporarily halted, however, when a log cabin was discovered inside. In a pair of Southeast Missourian stories from 1997, historians described the construction as primitive, likely dating from the 1820s or 1830s. The logs were cut from "tree trunks of varying sizes and species" while the floor was built with "mud, straw and narrow strips of wood atop log beams."

Appearing before the city's Historic Preservation Commission, the owner argued that the house should be preserved: "All communities have a beginning, a people, a vision, a dream. This log cabin, this diamond in the rough, is a precious and priceless part of that beginning."

The owner paid to stabilize the log structure and have the newer additions removed. Ideas were floated to move the log house to the empty lot behind City Hall or some other location.

However, later newspaper stories indicate that the house remained on the condemned properties list. The city council minutes from Jan. 22, 2001, succinctly reveal what finally happened: "Approved issuing a special tax bill for demolition of a dangerous building at 127 S. Frederick St."

History is now repeating itself at Fountain Street. Like the Frederick house, this log structure is also quite primitive, featuring logs of varying size and quality. It, too, was built with a system of mud, straw, and narrow strips of wood -- although this was used on the inside walls instead of the floor. 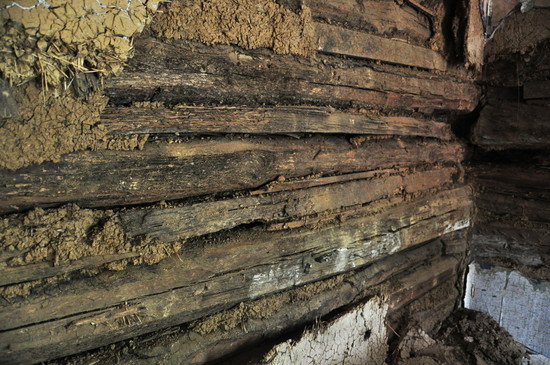 Just as before, the city has condemned the property as "dangerous" and wants it demolished as soon as possible.

Ideas have been floated to move the log structure to a new location. The trouble with these proposals, however, is that the property is much more than just a log cabin. It has additions, likely built in the 1870s, that were constructed with German-style walls, filled with brick rubble and supported by timber framing. The house sits on a basement of impressive, well-cut stone blocks. 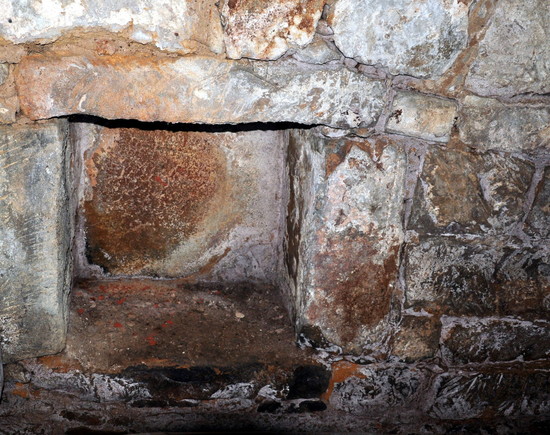 Even if the logs can be moved, it will be much harder to salvage these other noteworthy features. That's a factor in why this property was selected for the statewide Most Endangered List earlier this year.

Leaving everything in place, however, is a tricky proposition. The city has wide latitude to condemn a building for almost any reason. Under Sec. 7-266(12) of the city code, a building can be declared dangerous and ordered demolished if it violates "any provision of the building code of this city, or any provision of the fire prevention code, or other ordinances of this city."

Unfortunately, this leaves historic buildings out in the cold, since it's unlikely that they can comply with every ordinance or code. Other Missouri cities provide at least some provisions or exemptions for historic sites, but Cape Girardeau isn't one of them. We can see the results: an abundance of vacant lots.

Of course, dilapidated buildings shouldn't be allowed to remain in that state forever. But fixing historic properties to comply with modern standards is not something that can be done in haste.

A document frequently cited in historic preservation work, the "Secretary of the Interior's Standards for the Treatment of Historic Properties", neatly summarizes the problem: "Regardless of the treatment, code requirements will need to be taken into consideration. But if hastily or poorly designed, a series of code-required actions may jeopardize a building's materials as well as its historic character."

At any rate, the log house on Fountain Street faces a do or die situation with the city imposing a final deadline in August for something to be done.

A volunteer group has spearheaded an online fundraising drive. The goal is to raise $4,500 by July 29 -- a tough assignment indeed. If successful, this will demonstrate to the city fathers that people are serious about preserving and repairing this unique landmark. Perhaps this attention will also pay dividends in the future as other fascinating properties face the same endangered future.

If unsuccessful... well, we get to add another vacant lot to the city's arsenal.