Among all of Cape Girardeau's streets, Shinbone Alley easily has the most colorful name. It's a shame that it doesn't have any street signs. 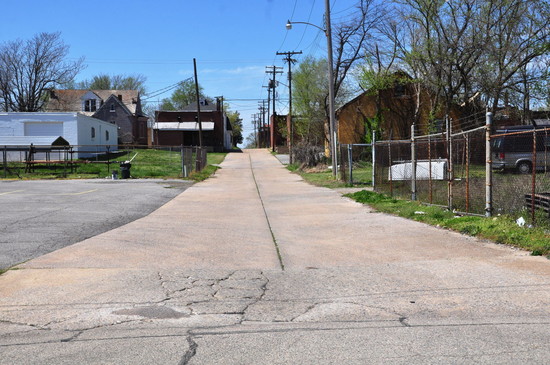 Shinbone Alley sits a half-block south of Good Hope Street in the Haarig district. One of my college professors liked to say that Cape Girardeau is a weird city because it has two downtowns. It's true: in its heyday, Haarig was just as much a "downtown" as the commercial district on Main Street.

Haarig's remaining storefronts have been nominated to the National Register of Historic Places. The nomination form explains the history of the district: "A concentration of German immigrants resided in the areas south of Good Hope Street, and soon commercial activity began to appear along this main corridor." 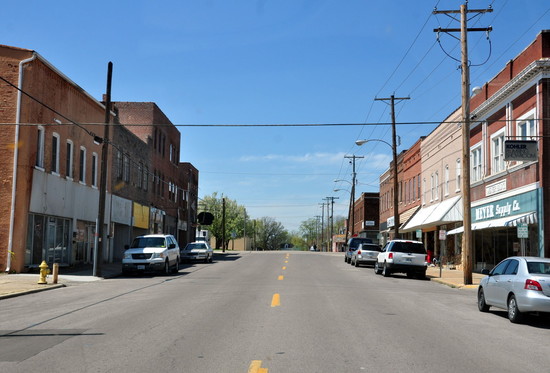 The first businesses developed on the south side of Good Hope, so it was convenient that an alley was available for deliveries. Unlike most Cape Girardeau alleys, Shinbone was built east-west instead of north-south. The alley starts mid-block between Pacific and Ellis streets, then runs east across Ellis, Sprigg, and Frederick streets. Plat maps show it is 25 feet wide, considerably more spacious than the usual 15 or 16 feet for alleys in the older portions of town.

So where did the name Shinbone Alley originate? Well, it's complicated.

Although hard to pin down exactly when the alley was first surveyed, it does appear, without a name, on the plat map of 1849. According to that plat, Good Hope extended west to Pacific Street, but Morgan Oak (one block to the south) only extended to Frederick. This meant that Shinbone Alley marked the southern fringe of the city west of Frederick. 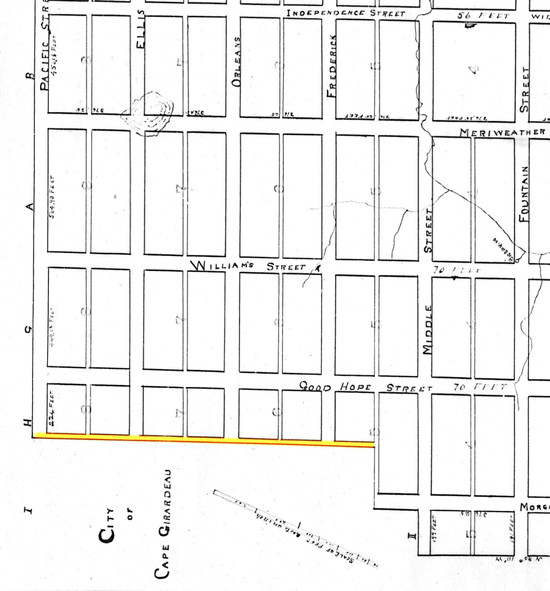 (I've highlighted Shinbone in yellow. The original plat was oriented with west at the top; I've rotated the image to make it easier to read.)

Later plat maps from 1859 and 1870 show the city growing south and west, reaching as far as Henderson and Jefferson streets. The alley, no longer at the edge, was still in place.

The earliest map I've been able to find labeled with the name Shinbone is the Sanborn Fire Insurance Map from 1893. 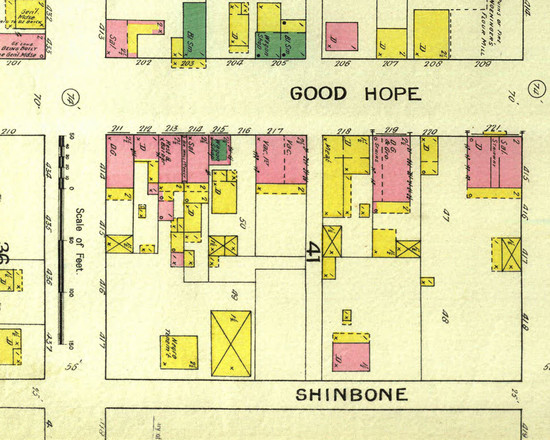 (I've also rotated this map so that north points up.)

By 1899, the name must have been relatively well known because Louis Houck mentioned "Shin Bone Alley" in a letter directed at the city council and reprinted in The Cape Girardeau Democrat. Houck was complaining about the deplorable condition of Lorimier Street. He had previously petitioned the city council to improve the street near Common Pleas Courthouse, but the city had instead worked on North and Ellis streets, which at that time must have been minor streets with far less traffic. In his letter, Houck sarcastically agreed that Lorimier Street should remain unimproved because it wasn't nearly as important as other thoroughfares, including Shin Bone Alley.

Indeed, with its wide concrete pavement, modern-day Shinbone is one of the nicest of Cape Girardeau's 13 miles of alleys. Without any street signs, however, it remains rather obscure. One vacant property between Sprigg and Frederick maintains the postal address of 615 Shinbone Alley, so the name is still officially on the books. Incidentally, this brick house (or duplex) was built in the German vernacular style and may have been constructed by prolific local builder Joseph Lansman. 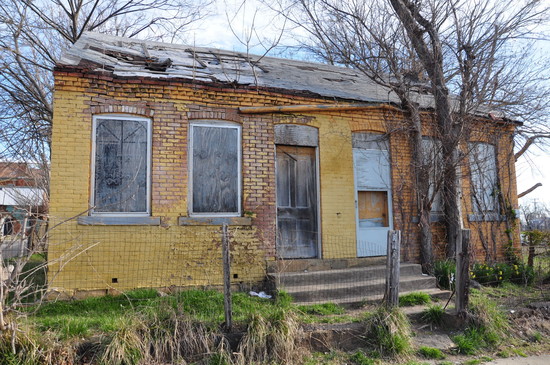 Shinbone Alley has been mentioned in Southeast Missourian stories over the years, which have offered two explanations for the name's meaning.

In a 2000 story on the origin of various city street names, B. Ray Owen wrote:

Thomas M. Meyer, who lives downtown and is a historian of the area, tells how Shinbone got its name: Edward F. Blomeyer, a founder of a brewery in Cape Girardeau and a former city official, was walking along the alley and hit his shinbone on a big rock. Blomeyer rolled the rock to the edge of a cliff on William Street near Happy Hollow and pushed it over to a place where a spring once flowed. With the rock removed, Blomeyer declared the alley safe for shinbones, and it became known as Shinbone Alley.

Sam Blackwell wrote a story on the history of Cape's alleys in 2007. He reported:

Cape Girardeau historians are at a loss to pinpoint the origin of the name, so people have come up with their own explanations.

Curiously, the second explanation is similar to one given for another Shinbone Alley, located in St. George's, Bermuda. A website about the town states, "One of the most colorful residential streets in St. George's also had the reputation of being the home to some of the town's most frequented taverns and bards. Locals attribute the street's name to the large number of shins being injured when bar patrons were reduced to crawling on hands and knees after having one drink too many at one or more of the taverns in the area."

Some Google searching reveals a number of seaside towns with a Shinbone Alley of some kind (whether an actual alley or a neighborhood). These can be found in Maine, Connecticut, New York City, and probably many other places that had sailors and adult beverage establishments.

Meanwhile, Shinbone is also mentioned in the lyrics to a sea shanty titled "Bully in the Alley." Sung with many different variations over the years, one particular version -- at least one that I can safely reprint here -- includes these lines:

Way, hey, bully in the alley!

All she did was dilly-dally.

Bully down in shinbone al!

It seems that "bully" was an archaic word for "drunk" -- or perhaps more precisely, "totally plastered." It's hard to tell whether the song was based on an actual place called Shinbone Al(ley), or whether the various places were inspired by the song.

Google returns other hits for the name. Shinbone Alley in New York City was the setting for a series of newspaper columns, which led to a Broadway musical co-written by Mel Brooks, which begat an animated feature film.

Since the name Shinbone Alley is so widespread, it's unlikely that Cape Girardeau's version was developed independently. The name was presumably imported from elsewhere, and chosen as a reference to the taverns and drunkenness along Good Hope.

Although Cape Girardeau isn't a seaside town, we do have "Cape" in the name, so perhaps it's no surprise that a sailor-inspired name like Shinbone would also land here. We will likely never know the exact circumstances, however, leaving Shinbone Alley as a colorful mystery.