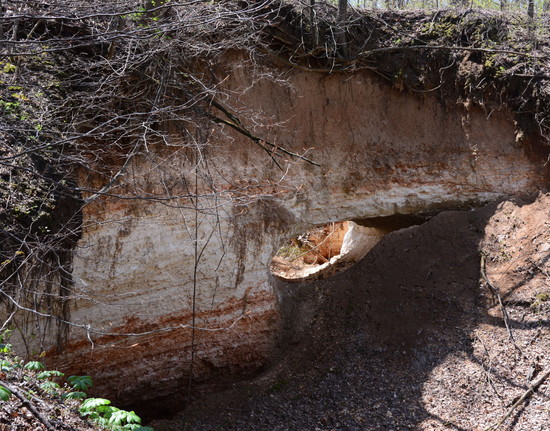 Here's a shocking sight: daylight visible through a hole in a narrow ridge. 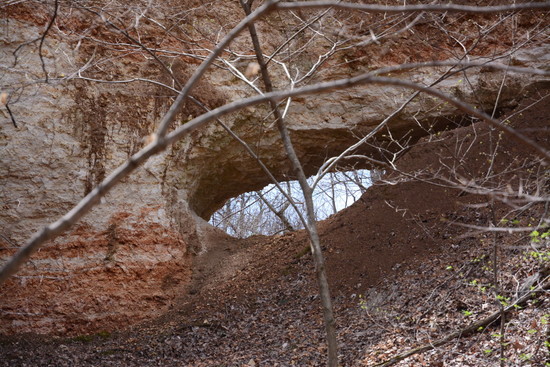 This scene is entirely man-made, the result of mining activity. It's located in Alexander County, Illinois, less than 20 miles from Cape Girardeau.

Nope, these miners were seeking tripoli, or microcrystalline silica, a material that isn't quite as exciting. Tripoli is still profitable, however, since it has a variety of industrial uses:

Tripoli has been mined in Southern Illinois since the horse-and-buggy era, with hundreds of known mine locations in Alexander and Union counties. Although now limited to only a few locations, tripoli is still extracted today. One such open-pit quarry can be easily seen from a public road. 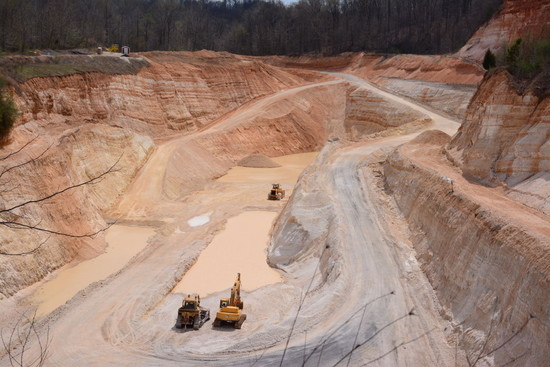 Many of the historic mine locations are now owned by the Shawnee National Forest. This poses a major problem, as these shallow underground mines, abandoned for decades, are not particularly stable. In April 1986, a mine suffered a catastrophic failure, down-dropping a forest road by 50 feet. 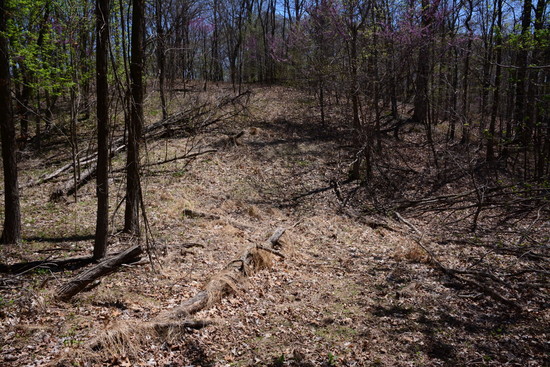 After nearly three decades, nature has managed to heal this wound, but the depression -- and lack of vegetation -- along the old road is still visible. Following this incident, the U.S. Bureau of Mines commissioned a study to identify other dangerous mine areas. The report noted dryly, "Surface subsidence could result in damage to personal property, personal injury, or loss of life."

The study located approximately 200 inactive tripoli mines and prospect sites within the Shawnee National Forest. Using this data, the Forest Service built fences around dangerous drop-offs. It's possible to still walk across the unnatural arch mentioned above, but the old road is flanked on both sides by barbed wire and warning signs to prevent anybody from venturing too close to the abyss. 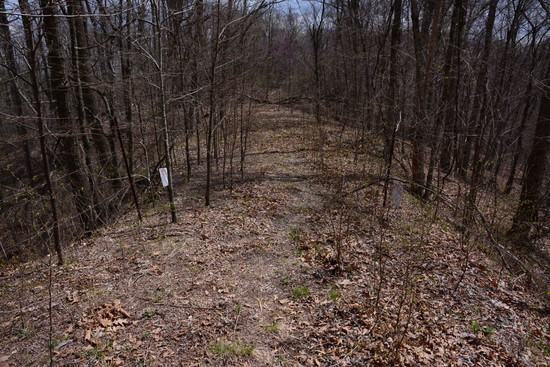 A short distance away, a deep sinkhole has been fenced and posted against trespassing. It's a long way to the bottom for the unsuspecting hiker. 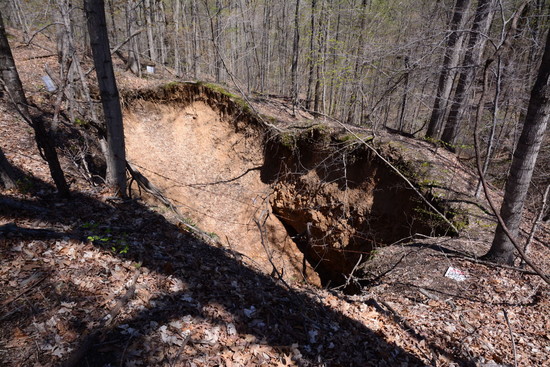 The Forest Service has also installed gates at the old mine entrances. 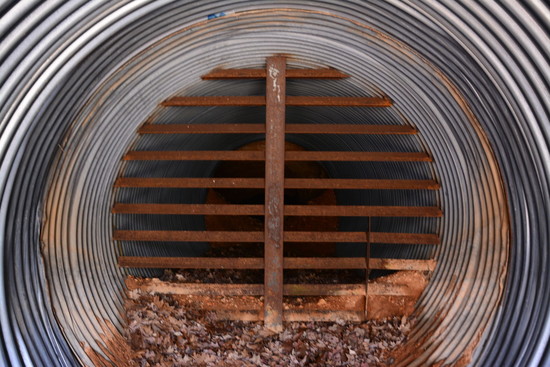 These not only prevent foolish people from entering and getting lost or hurt in the mine, but they also provide protection for endangered bats that have found a home in the underground passages. 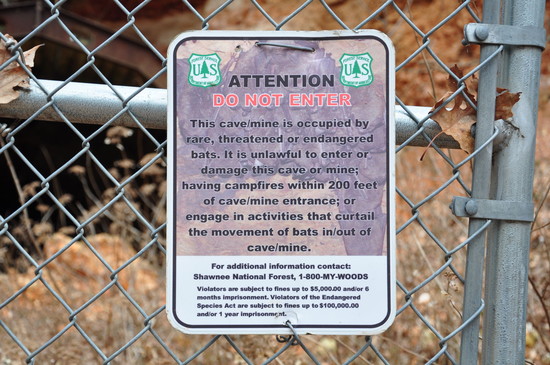 I have to be careful not to use the term "shaft" to refer to these mine openings. In mining parlance, only a vertical mine entrance is called a shaft, while a horizontal passage leading to the surface is called an adit. Since the tripoli is found in deposits underneath steep ridges, the miners could dig horizontally into the hillside, allowing the materials to be easily hauled out by wagons and then, later, by trucks. Some of the larger adits were 20 feet wide. 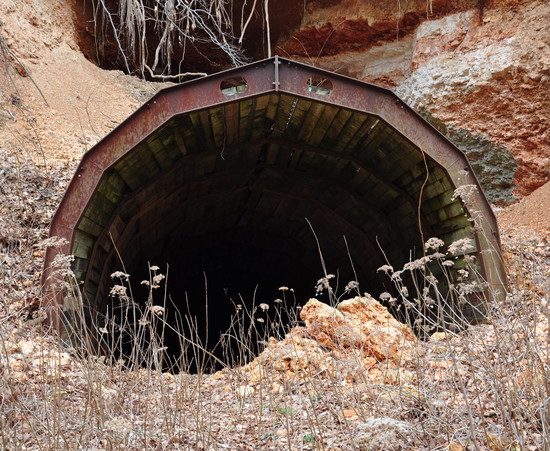 The miners used a technique called "room-and-pillar mining" in which some of the tripoli was extracted, creating large rooms. The rest of the material was left behind in the form of pillars to support the ceiling. Since the rock is relatively soft, however, the pillars can fail over time, causing subsidence to the surface. 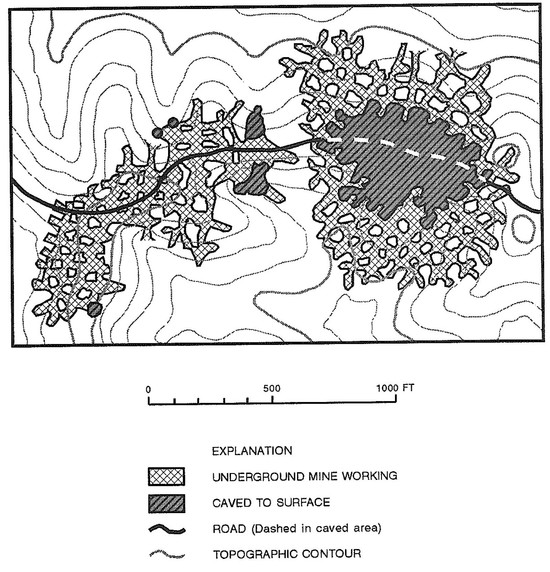 This map from the U.S. Bureau of Mines field survey shows the extent of two of the mines and the room-and-pillar arrangement.

Although the Forest Service has blocked off the known mine entrances, I did spot one ungated opening. Actually, I didn't really spot it. I felt it. A rush of cold air coming from a hillside made me stop and look, and I realized that some dangling tree roots were disguising a gaping hole in the earth. 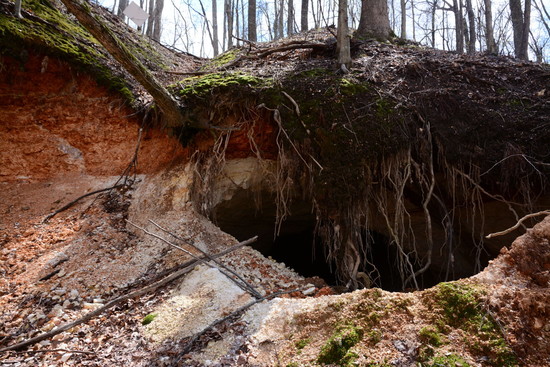 Carefully peering inside, it was clear that the passage led deep into the mine, with rooms and pillars visible in the gloom. Just brushing my head against the tree roots knocked some pebbles loose from above. I also noted ominous looking cracks along the walls and ceiling. Not wanting to win a Darwin Award, I backed away slowly from the crumbling mine portal. 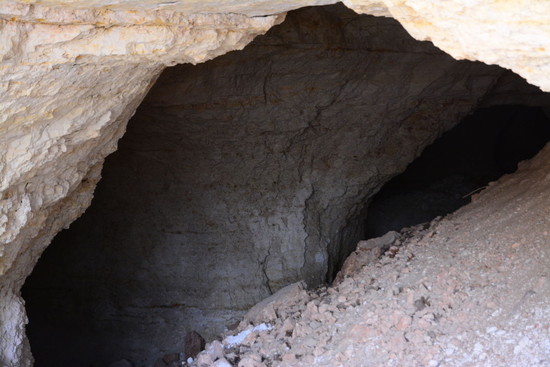 This mining area offers some spectacular sights, but it's also quite hazardous. Be careful out there, watch your step, stay above ground, and don't try anything foolish. This blog is not responsible for accidents. Just recall every legal disclaimer you've ever read and apply all of them here.

The tripoli mines are widely scattered in the hills of northern Alexander and southern Union counties, but the unnatural arch and down-drop spot can be found along an abandoned road a short distance from Opposum Trot Trail, a fairly decent Forest Service access road.

From Cape Girardeau, cross the Emerson Bridge and turn left on Highway 3. At McClure, turn right on Grapevine Trail. After 7 miles, turn left on Delta Road (or Mill Creek Road on some maps). At the big open quarry, bear right on Opossum Trot Trail (also called Moad Hollow Road). At the quarry entrance gate, continue straight, then make a sharp left at the next intersection to remain on Opossum Trot Trail. This gravel road enters National Forest territory and climbs to the ridgetop. After 2.5 very twisty miles, the road curves to the right at the approximate coordinates 37.28623, -89.29403.

Straight ahead is the old road, abandoned following the mine subsidence. Park where safe and hike east along the old road for a short distance to the unnatural arch, down-drop area, and other features.

Geologic Map of the Mill Creek and McClure Quadrangles, Illinois by the Illinois State Geological Survey (1996)