The secret entrance to Secret Canyon

"You hiked all the way here?" asked a passing horseback rider.

"Really? It's several miles from the trailhead."

"No, I'm actually parked only a quarter mile from here."

"Uh, you don't say? I guess I don't know this area too well," the rider said before moving on.

That conversation took place last October at a place called Secret Canyon in Pope County. Based on the large number of riders I saw, it's clear that the canyon isn't much of a secret.

The real secret is knowing the best way to get there. It's much easier to reach on foot than by horse. 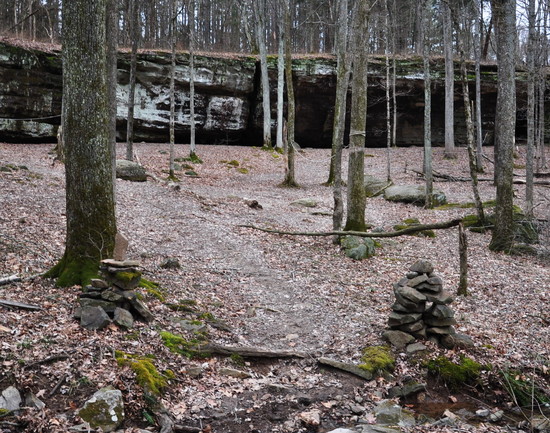 Like many Southern Illinois canyons, this one features rock walls, large rock shelters, scattered boulders, and a waterfall. The biggest rock shelter, with horse tie-ups in front, is a popular hangout for riders. 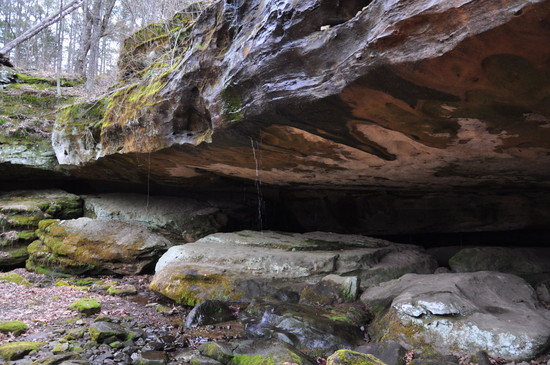 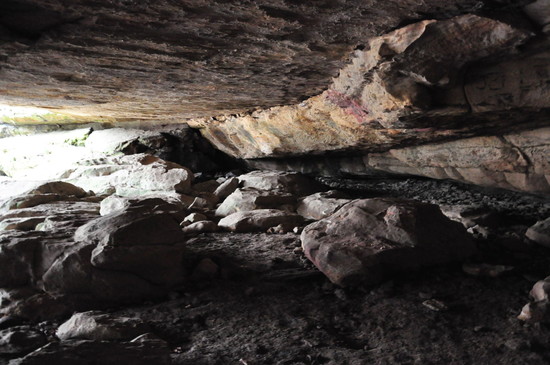 A canyon wouldn't be a canyon without sheer vertical walls. Those are in abundance here. 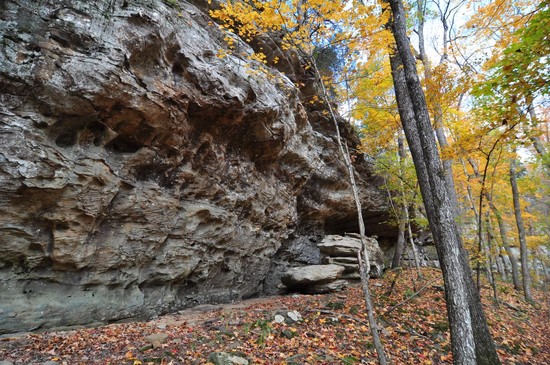 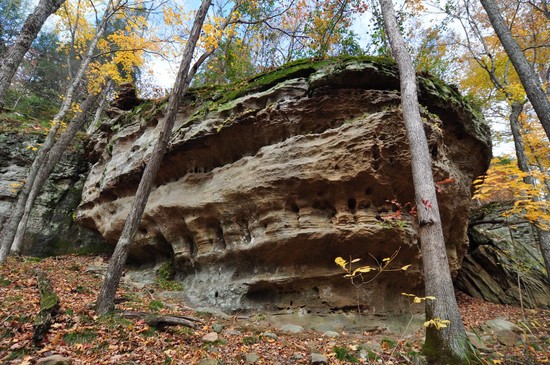 In places, chunks of sandstone have drifted away from the walls of the canyon, creating "rooms" with rectangular edges. This pattern is seen throughout the Shawnee National Forest. 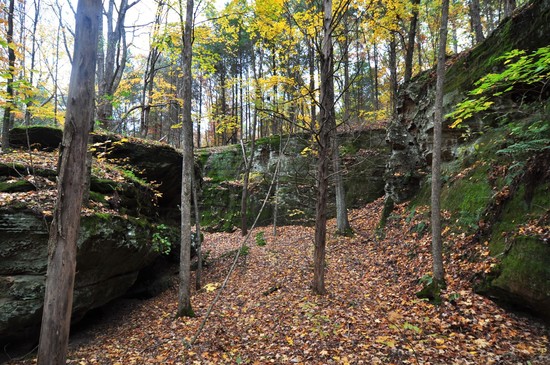 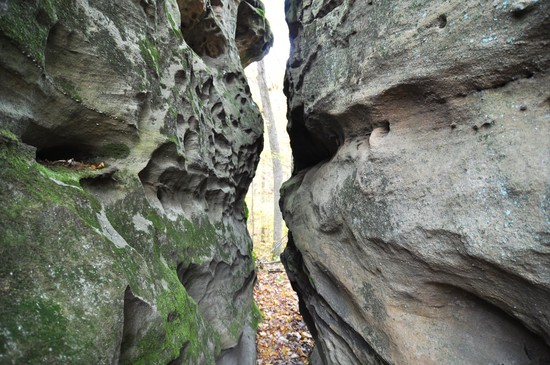 I spotted a natural arch along one of the bluffs, but don't get too excited: the span of this "arch" is only a few inches. 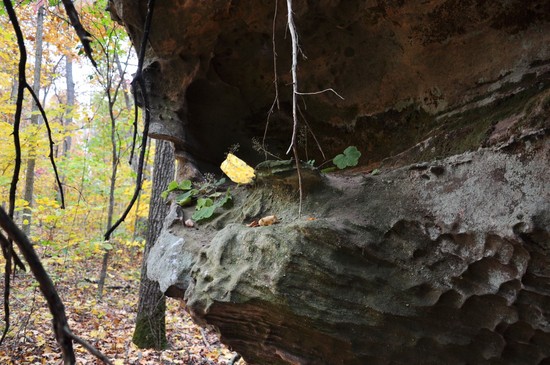 A small stream, an unnamed branch of Lusk Creek, flows through the middle of Secret Canyon. At the head of the valley, the creek tumbles through a field of boulders, similar to a Missouri-style shut-ins. 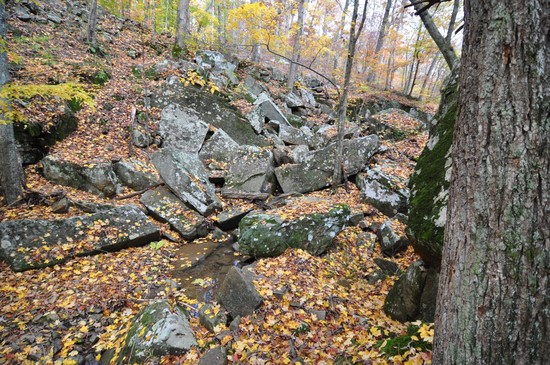 At the uppermost reach of the canyon, the creek flows over a small waterfall. 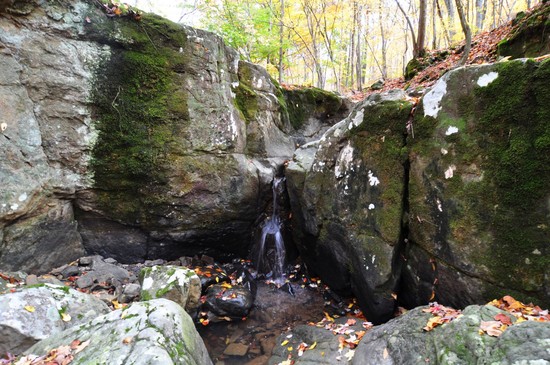 Upstream from here, the water is interrupted by a series of shallow rock ledges. 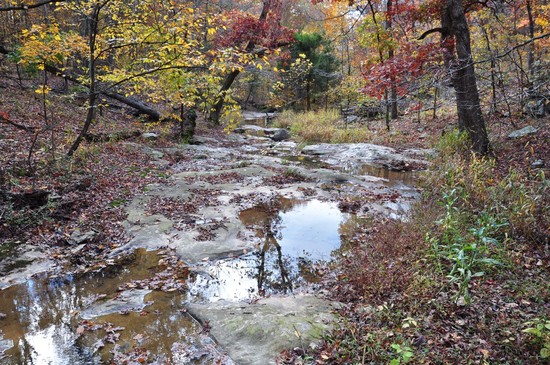 Soon the creek reaches "civilization" in the form of the old New Liberty Church and Cemetery located at the end of the gravel road. 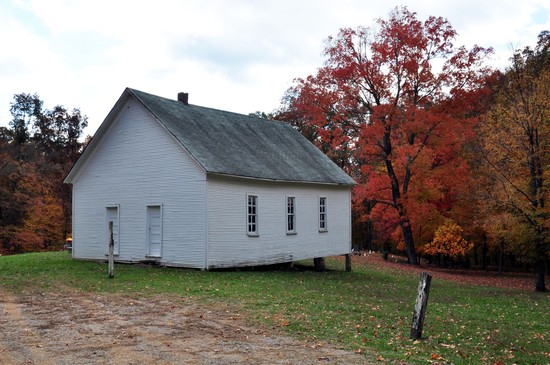 From the church building, it's only a quarter-mile to the waterfall at Secret Canyon. Horseback riders usually start at the River-to-River trailhead near Eddyville, over two miles away as the crow flies, and roughly five miles by hoof.

From Cape Girardeau, take Highway 146 east through McClure, Ware, Jonesboro, Anna, and on to Vienna. Drive through Vienna and through the I-24 interchange. Just past the interchange, turn left on Highway 147. Follow this road until it ends at Highway 145 and then turn left.

Drive north on Highway 145 for 12 miles and then turn right on Oak Road. Follow this twisty but paved road for 3 miles until it comes to a three-legged intersection. Follow the main road as it bears right. Just over a mile later, the paved road makes a quick left turn. Instead of turning, continue straight on to a gravel road. In typical Southern Illinois fashion, the name of the road is unclear: it could be County Road 10, Forest Road 488, Forest Road 1867, or New Liberty Church Road depending on which map you have.

Follow the gravel road (it's in reasonably good condition) until it ends at the church grounds. Find a safe place to park.

Secret Canyon is located within the Lusk Creek Wilderness Area of the Shawnee National Forest.

Walk along the old road past the church until reaching the creek. From here, follow the creek west (right). If the creek isn't too full, you can walk along the rocky bottom (just watch for slick spots), otherwise it's not too hard to hike parallel to the creek through the woods. The creek will soon drop into the canyon at the waterfall. A horse trail, #457 on the interim trail map, provides access to the canyon floor to the right of the creek. 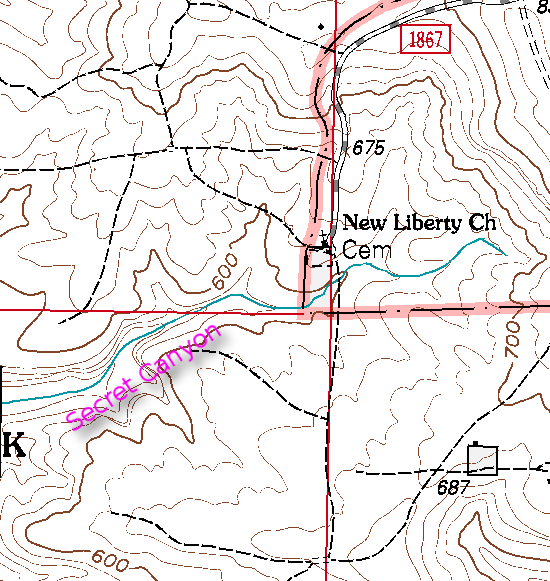