"One of the attractive affluences of a modern city"

The impending demolition of the Plaza Galleria, formerly a Kroger store, has sparked a discussion about whether the store was the first "modern supermarket" in Cape Girardeau.

The answer? It all depends on the definition of "modern supermarket."

When the new Kroger opened in June 1969, the Southeast Missourian reported, "Cape Girardeau's position as the retail mecca for this district and adjacent states areas will be advanced when the Kroger Co. opens its new Family Center Tuesday morning. The huge 54,000-square-foot facility, located in the 2000 block of Independence street, has transformed a recent wasteland of junked automobiles and tangled vines and trees into one of the attractive affluences of a modern city."

It's ironic that the Kroger building would eventually turn back into a wasteland with an interior filled with "tangled vines and trees." At least the junked automobiles haven't returned. 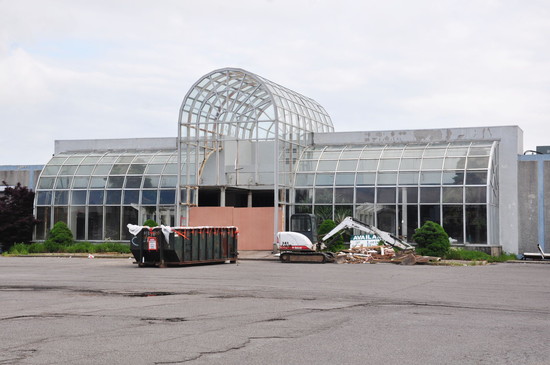 The new store was a turning point for Cape Girardeau's retail industry. Costing $1.5 million to build, it was a massive structure "large enough for a football field plus end zones." It had 12 checkout lanes and a parking lot that could accommodate 437 cars.

It also brought a new concept to the city, one that stirred considerable controversy: it was open on Sundays. On the day of the grand opening, June 10, 1969, the First Baptist Church ran a full-page ad in the newspaper denouncing the store's policy (but not by name). 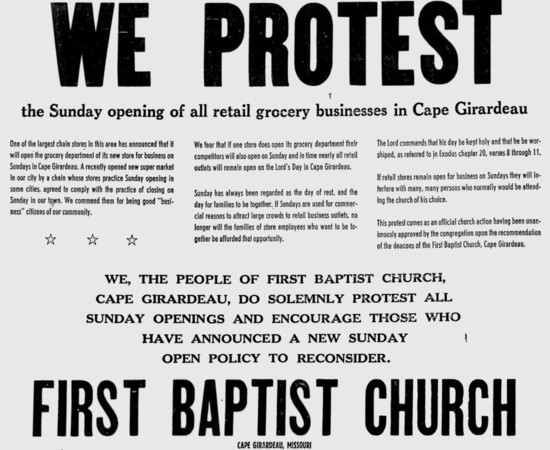 "We fear that if one store does open its grocery department," the ad stated, "their competitors will also open on Sunday and in time nearly all retail outlets will remain open on the Lord's Day in Cape Girardeau."

Their prediction would be proven correct, but it's obvious the churchgoers were fighting a losing battle.

The store was remodeled and rebranded as a Kroger Sav-On in 1976. It was, at that point, the largest of Kroger's 1,200 nationwide locations. Despite the investment, the store was closed in 1982 due to poor sales and labor problems. That set the stage for the makeover into the Plaza Galleria in 1984.

In its heyday, the Kroger was not just a grocery store; it had several other departments (pharmacy, clothing, hardware, automotive, toys, and a "snack shoppe"). It was, in many ways, an early version of the big box stores that we have today.

Nevertheless, it wasn't really the first modern supermarket. The concept of a sprawling grocery store was already old hat by then. In 1968, the year before the new Kroger opened, the Southeast Missourian ran an amusing editorial entitled "Driver Ed for the Supermarket?" In it, the writer refers to an unnamed male friend caught in the battle of the sexes:

Supermarket shoppers, he reports, do everything automobile drivers do, and go on from there.

He claims they cut in and cut out on you. They tailgate you from the rear and slowpoke you crazy from in front. They turn without signaling, stop on a dime-to-be saved, and even back up without warning.

They speed and they swerve. They block your path as they pause to ponder and meditate and compute. They squeeze oranges and lemons and tomatoes and pinch cucumbers. They laboriously check one can against a bigger can to determine the cost per ounce.

They outmaneuver you in getting to the checkout counter, even if they are carrying a week's supply and you have one item. And they bury their checkbook in the bottom of the purse. And by the time they have found it, and a pen, your frozen food is thawing and your oven-fresh bread is turning stale.

All this, you understand, is just one man's version. The ladies we know would no more act like this in a supermarket than they would on the highway. No sir, not one bit more.

That same editorial could easily appear today, except most contemporary writers wouldn't dare engage in such political incorrectness. Nevertheless, it's clear that supermarkets were well established by that point.

Of these, it appears the A&P on Spanish Street was the first store that had the amenities we would associate with a modern supermarket. At the time of its opening in Oct. 1941, the word supermarket was still in flux. The store's grand opening advertisement used "super market" while a news article describing the store used both "super-market" and "supermarket."

The ad proclaimed "Open Today! (The Store of Tomorrow)" 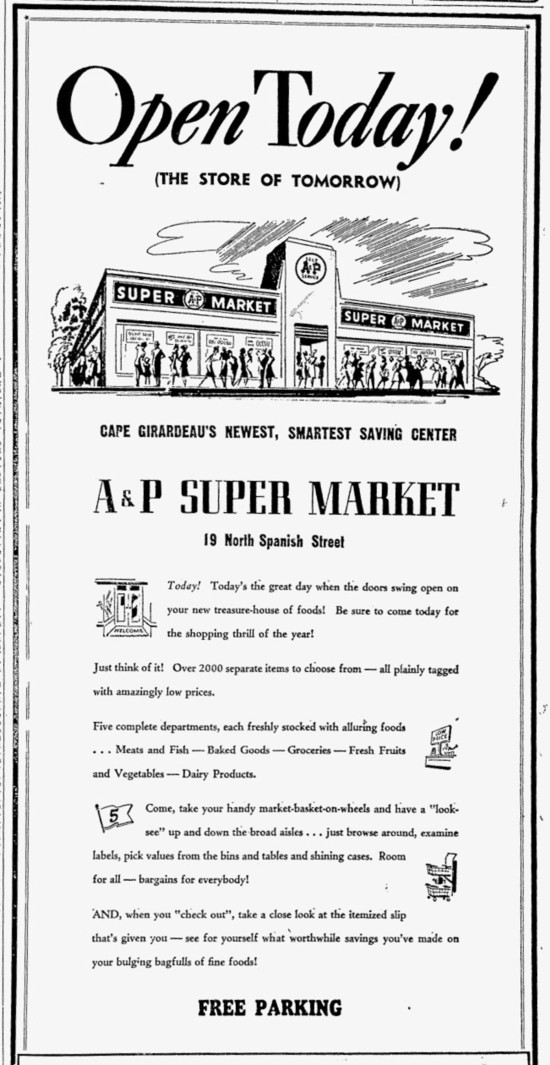 As was typical for these kinds of developments, the news article went into ridiculous detail about the store's features. It carried 2,500 different grocery items, enough to fill ten trailer trucks, and "four to five times the stock carried in the better 'old line' stores the company operates in communities where it does not have a supermarket."

The store had five -- yes, five -- checkout aisles, each capable of printing itemized receipts. Shopping bags were available for a penny. The coffee department could grind a pound of coffee in seven seconds. The lighting, consisting of 80 clusters of fluorescent lights, made the interior "almost as light as day." Overall, it had "several features not incorporated in many of the newer markets erected elsewhere." 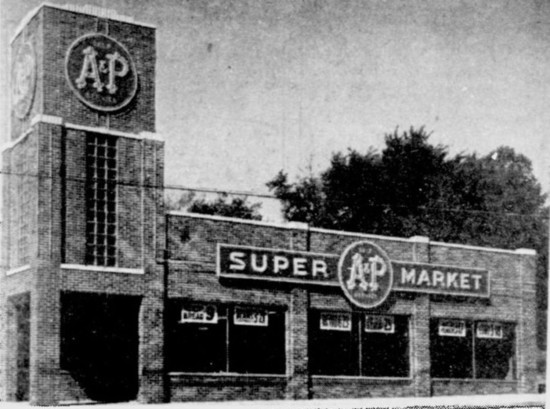 I've heard many people comment on the store's automatic doors, a favorite thing for kids to play with, but the newspaper didn't mention that. Perhaps that was a later addition.

Today, the A&P store building is still standing, but has been converted into an antiques store. 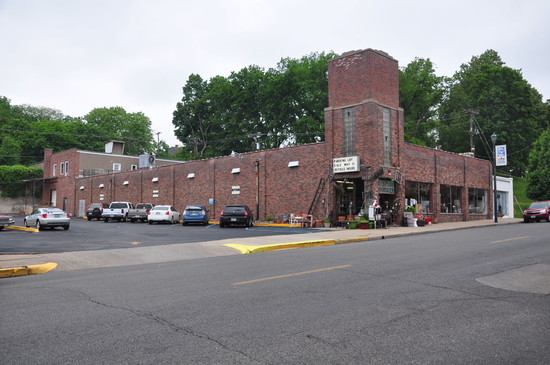 Other supermarkets arrived in the following years. Kroger opened a store "of supermarket size" in 1948 at 724 Broadway, while Child's IGA Foodliner opened in 1950 at 1736 Broadway. Still, the 1941 A&P store appears to have the best claim for first modern supermarket in Cape Girardeau.

The Kroger Family Center/Plaza Galleria does, however, have a strong claim on first "superstore."