Rockview should take advantage of the situation

Two years ago, the Union Pacific No. 844 steam locomotive brought huge crowds to Southern Illinois and Southeast Missouri as the train made a weekend stop in Cape Girardeau. The overpass at Rockview provided an excellent vantage point to watch the train. 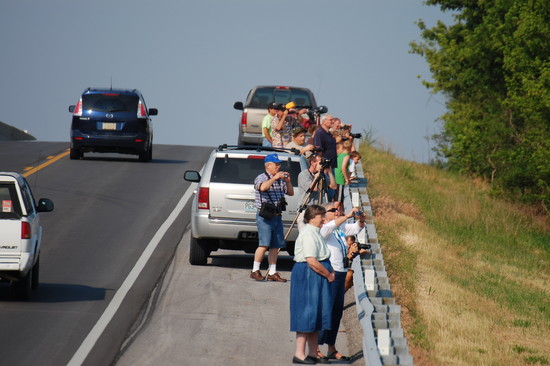 On that day, I was standing at the center of the overpass. 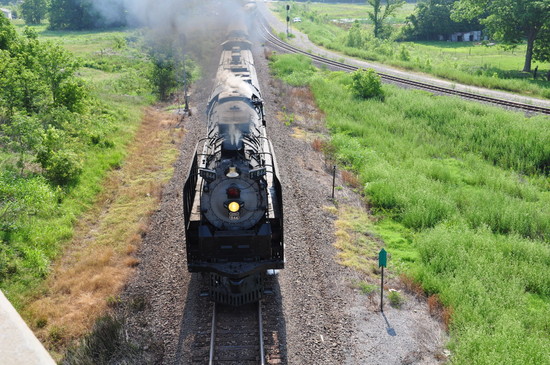 It's funny to think that exact spot is now gone after a train collision wiped out the bridge. 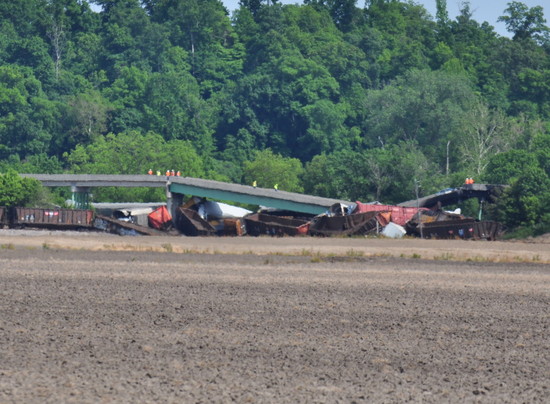 Plans have already been announced for a $3 million replacement overpass. Instead of merely replicating the collapsed bridge, however, MoDOT and the village of Rockview should think outside the box.

Rockview has the potential to become a tourist attraction for people who like to watch trains. Sitting at the intersection of two active rail lines, this location features plenty of action. The Burlington Northern Santa Fe carries moderate traffic between St. Louis and Memphis, while the Union Pacific carries much heavier traffic between Chicago and Texas. 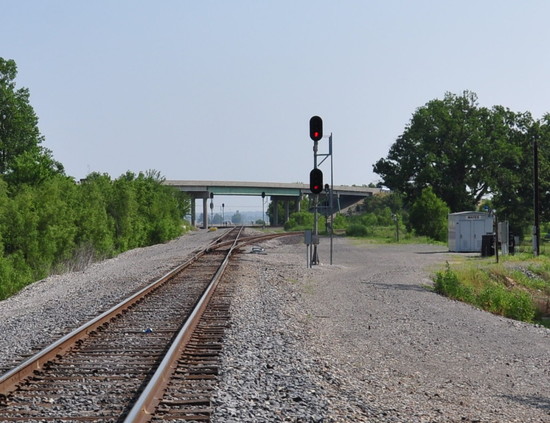 Before its demise, the overpass crossed directly above the "diamond" where the two lines meet. It's an unusual scene, one well-known to local railfans. 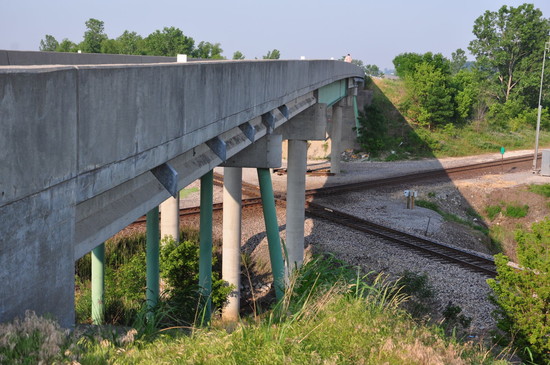 Railfans will drive long distances to find prime viewing locations for trains, a fact that hasn't gone unnoticed by towns across the country. Rochelle, in northern Illinois, was the first town to open a park specifically for rail enthusiasts -- and it has been an unbelievable success. 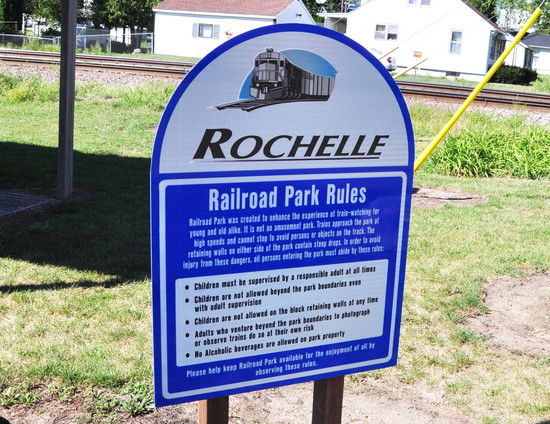 Much like Rockview, Rochelle sits at the busy junction of BNSF and UP tracks. The town doesn't have an overpass directly above, but it does feature "quadruple diamonds" where two pairs of tracks meet. 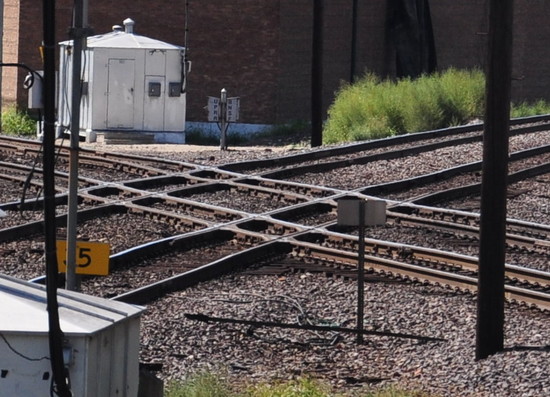 I happened to visit last year during a Saturday afternoon, and the park was bustling. It features a pavilion, outdoor exhibits, gift shop, and bathrooms, all wedged between the two sets of tracks. 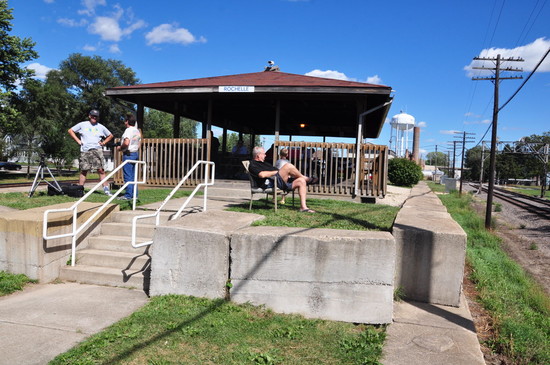 As someone who only has a passing interest in trains, it was a bit unnerving to see hard-core railfans perched with their high-dollar camera gear, scribbling in their notebooks, and listening to the radio scanner for hints about when the next train would arrive. When the scanner indicated that an eastbound BNSF train was only a mile away, everybody would jockey for position and the photographers would tweak their camera settings. The roar of the coming train would increase until the locomotive suddenly appeared and barrelled across the diamonds. 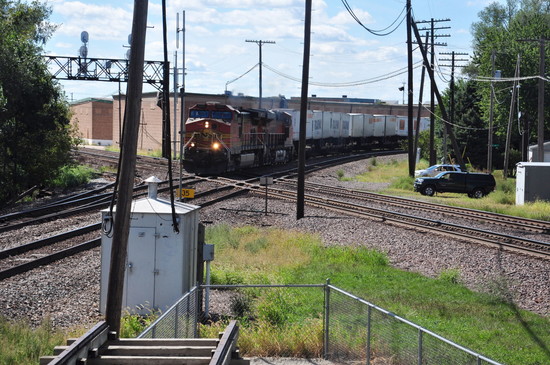 The railfans would record the train's details in their books and then prepare for the next arrival. With 80-120 trains passing through here on a typical day, the wait was never very long. 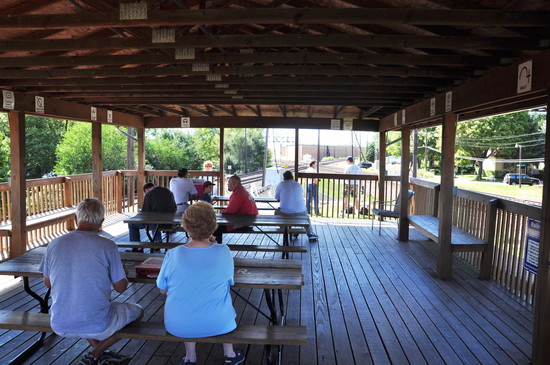 Not everybody at the park that day was a serious geek. Senior citizens sitting in lawn chairs and families with children were also watching the show, a scene similar to the boat watchers at the Cape Girardeau riverfront.

Prior to the park's opening in 1998, Rochelle residents -- and police -- weren't quite sure what to think of the railfans that would park on the streets and sometimes get too close to the tracks. An Associated Press story from 1999 explained, "But instead of running the curious out of town, Rochelle has decided to turn them into tourists." The economic development director "began promoting the park idea after stopping at the tracks one night to see what the fuss was about and meeting train-watchers from as far away as California and New York."

A key aspect of Rochelle's park is that the convenient viewing platform keeps people from trespassing on railroad property and getting flattened by a locomotive travelling 45 mph. It's a win-win-win situation: it improves safety, gives rail enthusiasts a home, and encourages tourism for a town that doesn't have many other attractions.

This could just as easily be Rockview. While Rockview doesn't have quite as many daily trains as Rochelle, it does come close. The village could offer a legal viewing area -- it doesn't have to be as elaborate as Rochelle's -- and market this as a destination for railfans. MoDOT could strong-arm some extra money out of the rail companies as compensation for the inconvenience that their train collision has caused.

If nothing else, the newly built bridge should have an extra-wide pedestrian lane as a viewing platform. Indeed, it would be a huge mistake for MoDOT to design the replacement bridge to be as narrow as the old one!

The huge turnout for the Union Pacific steam locomotive shows that many people in the area enjoy trains, while the success at Rochelle demonstrates that railfans will travel across country to pursue their hobby. We need to capitalize on this. 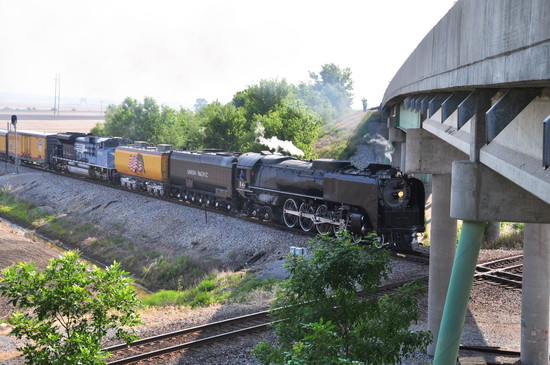