The flag that almost was

In a recent blog, I described the team effort that produced the Missouri state flag, as well as the showdown in the state legislature between two contending designs. Marie Oliver's design won against a flag created by Dr. Numa R. Holcomb, a state representative from Kansas City.

After spending some quality time studying newspaper archives, I was able to track down a rendering of Holcomb's proposed flag. It appeared as part of a front-page story in the March 1, 1909, issue of the University Missourian of Columbia. 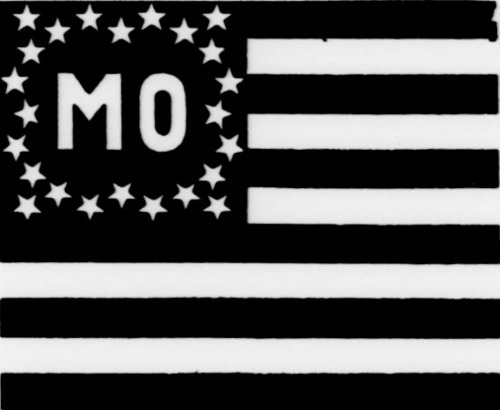 The story explained that Holcomb's flag was also a team effort:

Dr. N. R. Holcomb, who introduced the bill for a state flag for Missouri, received his idea from a country school teacher, one of Dr. Holcomb's constituents. The teacher wrote Dr. Holcomb asking if the state had an official flag. This resulted in an investigation being begun by Holcomb. He found there was no official record of a state flag. He wrote to secretaries of state in states that had adopted official flags and asked for information regarding their state emblems. With the assistance of Cornelius Roach, secretary of state, and H. A. Gass, state superintendent of public schools, he designed the flag which is now before the assembly.

The newspaper rendering was only printed in black and white, but the intended color scheme was basically the same red, white, and blue style as the U.S. flag. This similarity to the national flag is probably what doomed Holcomb's design.

A few days before, on Feb. 26, the University Missouri had reprinted an editorial from the St. Louis Republic criticizing the Holcomb flag. "But the design offered by Mr. Holcomb can probably be improved upon," the editorial stated flatly. "The State flag should not be a copy of the national one, but should have a distinct individuality." The writer suggested adding the state's coat-of-arms to the design.

As it turns, that's just exactly the kind of design that Marie Oliver and friends were putting together. Soon after, on March 17, Sen. Arthur L. Oliver introduced Marie Oliver's flag design in the senate. In a statement, Sen. Oliver attacked the competition:

The Doctor Holcomb design for a state flag introduced in the House is objectionable in that it does not contain the coat-of-arms, and because the general design is similar to the national flag. It is liable to cause a confusion in the field and elsewhere. There is nothing in the Holcomb design that indicates state sovereignty or the relation of the state to the Union, except the abbreviation of Missouri by the use of the letters "Mo."

Holcomb's design had the strong support of the house of representatives, as well as the backing of the secretary of state and the state superintentent of public schools. If his design hadn't been quite so uninspired, it's likely that he would have won the competition against the Olivers.