The Missouri flag was a team effort

Marie Watkins Oliver has been called the "Betsy Ross of Missouri" for her work to create a Missouri state flag. Mrs. Oliver was featured prominently in the recent centennial celebration for the flag. However, she wasn't the only person who had a role in the flag's design.

For some reason, Missouri had lagged behind other states in adopting a flag. It wasn't until 1908 that the Missouri branch of the Daughters of the American Revolution spearheaded a campaign to design a flag. Oliver was appointed chairwoman of the flag committee, and she set to work researching the flags adopted by other states.

She had some designs in mind, but she needed help from an artist to create a working model that could be showed to the Missouri legislature. It just so happens that Oliver was friends with Miss Mary Kochtitzky, described in one article as "an artist of much skill and taste living in Cape Girardeau."

Many years later, during a 1971 banquet for the Cape Girardeau County Historical Society, Mary Kochtitzky explained her own role in the creation of the flag. The newspaper account of the banquet said, "Mrs. Oliver had decided the flag must contain three elements: the national colors, state seal and 24 stars to signify that Missouri was the 24th state to enter the Union. Many combinations of these were tried before Miss Kochtitzky painted the final design presented to the Legislature." 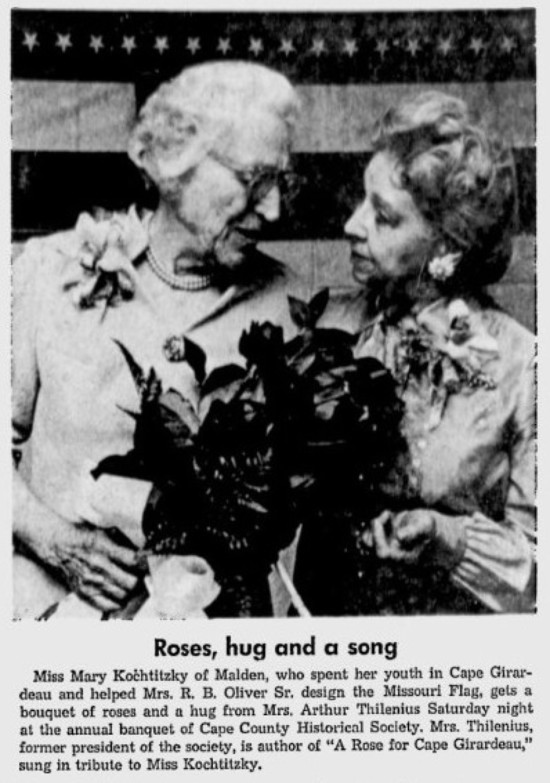 Kochtitzky's obituary from 1973 mentioned that she had called herself an "amanuensis" to Oliver. I had to dust off the extra-thick dictionary to find this word: it means "a person who takes dictation or copies something already written; secretary." This suggests that Oliver explained the idea and then Kochtitzky executed it on paper.

Both women had additional help from another unlikely source: one of the greatest minds in Southeast Missouri at the time. Mary's father was Otto Kochtitzky, the brains behind the Little River Drainage District. The district had just been formed at the time, but it would later have a profound impact on regional history, all thanks to Otto Kochtitzky's grand scheme to drain the swamps. As a civil engineer, he had a gift for mathematics, and he used that talent to tweak the flag's design. According to Mary, he "worked out the flag's mathematical proportions."

The final paper flag, conceived by Marie Oliver, painted by Mary Kochtitzky, and tweaked by Otto Kochtitzky, was sent to the Missouri legislature, where it was well received by the senate. It helped that a nephew, Arthur L. Oliver of Caruthersville, was a senator who could introduce the bill to officially designate the flag. It also helped that Marie's husband, Robert Burett Oliver, was a former senator who knew how to draft the wording of the bill.

The Olivers had the senate locked up, and they voted 24-1 in favor of the flag in 1909. The house of representatives, however, was another story. Rep. Numa R. Holcomb of Jackson County presented his own flag design, and naturally the house was partial to one of its own members, just as the senate was partial to the Olivers. So the bill didn't pass that year.

In 1911, the Olivers tried again, but were thwarted by a fire that destroyed the state capitol -- along with the paper flag. Mary Kochtitzky was unavailable at the time, so another artist, Mrs. Stanley D. MacFarland, was called upon to paint a replacement version of the flag, this time using silk that was sewed by Marie Oliver. It took two more years before the "Oliver Flag Bill" came up for a vote. This time it passed both chambers, likely helped by the presence of yet another Oliver family member in the legislature: Rep. Charles C. Oliver of Cape Girardeau County.

Gov. Elliott Woolfolk Major signed the bill on March 22, 1913. This was the final step in a five-year process started by Marie Oliver, but also helped by several other people, especially Mary Kochtitzky.

The house where Marie worked on the flag, then called "Olive Heights" but now the Oliver-Leming House, still stands as a beautiful landmark presiding over Ellis and North streets. 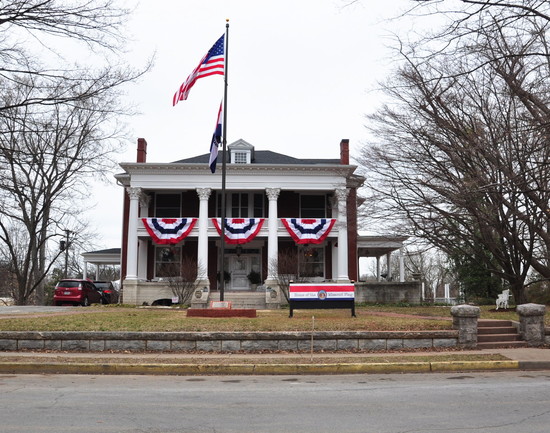 Unfortunately, the Kochtitzky home, located nearby at 239 N. Pacific, no longer exists.