Another historic landmark is about to get crushed, courtesy of the university

Southeast Missouri State University is home to a distinguished historic preservation program, one of the only undergraduate programs of its kind in the country.

With such an asset at its disposal, we should expect the school to be a shining beacon for historic preservation, well positioned to have a rich portfolio of success stories, kicking the pants off other colleges.

You can stop laughing now.

Of course, as well all know, the university's Board of Regents is simply incapable of looking at historic buildings or structures without plotting ways to convert them into parking lots or shiny new edifices.

Preserving an existing building or structure simply doesn't provide adequate levels of publicity and photo opportunities that university officials demand. That's why a never-ending series of vintage properties owned or acquired by the college have been turned into bulldozer fodder over the years: Washington School, houses on Henderson, Pacific, and North streets, and numerous storefronts along Broadway.

The university's reputation is well known outside of Cape Girardeau, and not in a good way. In 2011, when Old Jefferson School was listed as one of Missouri's Most Endangered Historic Places, the announcement explained, "The neighborhood in which the Jefferson School is located is near Southeast Missouri State University's new River Campus, and there is also local concern that the building might be threatened by the University's plans for real estate development."

Jefferson School is 3˝ blocks away from the campus grounds, but past events have demonstrated that even such a sizable buffer isn't enough to escape the spread of the university's kudzu-like growth, with tentacles spreading through the community and obliterating landmarks in its path.

And now -- just like clockwork -- the Board of Regents has unanimously decided to erase yet another historic landmark. In fact, this might be their crowning achievement: the destruction of one of the oldest structures in all of Cape Girardeau, the ca. 1843 handball court built by master builder Joseph Lansman. 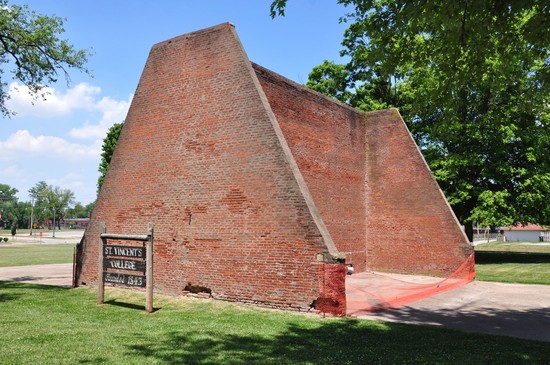 The handball court is much older than any other property the university has chosen to destroy in recent memory. It's quite possible that this was the first handball court built west of the Mississippi River. By approving this project, the Board of Regents has reached a whole new level of audacity.

In some ways it's a miracle the handball court survived the first purge during the establishment of the River Campus, when many of the auxiliary structures from St. Vincents College were removed (gymnasium, grotto, tennis courts, and more). For a brief time, the handball court was actually considered for an outdoor amphitheater. 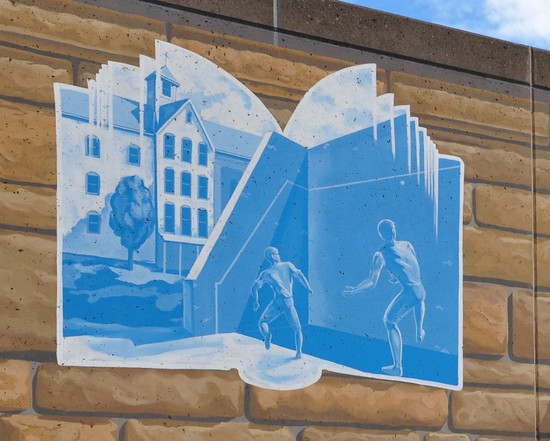 The handball court as depicted on the downtown floodwall mural

Obviously, that was too good to be true.

To add insult to injury, a "select" number of bricks from the handball court will be incorporated into the facade of the new River Campus building. That's the kind of thing that passes for "historic preservation" around here.

But why should anybody care about an 1843 brick structure? I mean, we have those on every street corner. They are a dime a dozen! 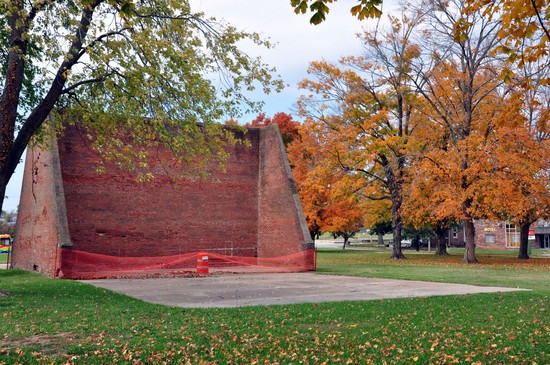 Oh wait, there I go again with the sarcasm. I really need to cut back; I don't want you, dear reader, to get hurt while laughing uncontrollably.

It gets even worse. The handball court was built by the same person who would later lend a hand in making a university possible in Cape Girardeau. When the original Third District Normal School was commissioned by the legislature in 1873, Cape Girardeau and Arcadia (in Iron County) were the leading contenders to land the school. Louis Houck offered to donate 10 acres of land south of Cape to help secure this plum, but the Arcadians claimed that such low-lying swampland was a source of "malarial fevers" and would not be a healthy choice.

Houck was able to work his magic to steer the newly formed Board of Regents toward Cape, but Lansman helped seal the deal. He agreed to donate land he owned at the site of Fort B, the old Civil War fortification on a hilltop north of town, well away from the mosquito-laden swamps. During a crucial meeting at the St. Charles Hotel (built by Lansman), the regents made the final selection of Lansman's site for the new college.

Without his donation, it's possible that Cape would not have been able to secure the normal school, and we wouldn't have Southeast Missouri State University today.

Does Lansman get any credit or recognition for this? No way. Not only does he languish in obscurity, but the university is now wanting to destroy one of his more interesting creations.

The loser in all this is Cape Girardeau, a community that is making good on its tourism slogan of "Where the River Turns a Thousand Tales." Soon that's all we will have: tales, stories, and vague memories of landmarks that used to exist.

NEXT, IN PART 2: The life of Joseph Lansman, the "Man Who Built Cape Girardeau."