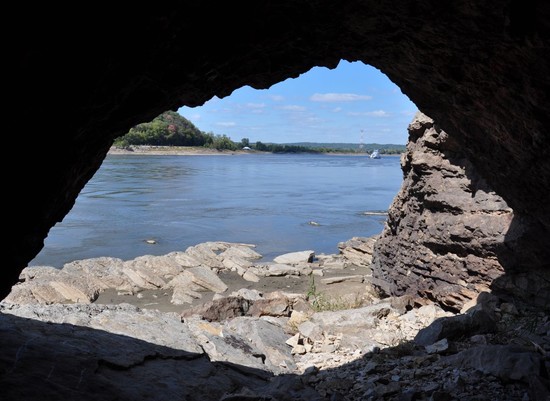 With the Mississippi River taking another dive thanks to the ongoing Midwestern drought, it's possible to walk to Tower Rock again. However, the Missouri Department of Conservation has posted a big notice on their website saying bluntly, "NO CLIMBING ALLOWED ON THE TOWER ROCK."

Tower Rock isn't the only attraction around here, though. It has a twin on the opposite side of the river at Grand Tower, Illinois. Called the Devil's Bake Oven, this prominence features two natural arches, the ruins of a stone house, a massive suspension bridge, and an excellent view from above. Luckily the Grand Tower-ians aren't as strict about climbing to the top. 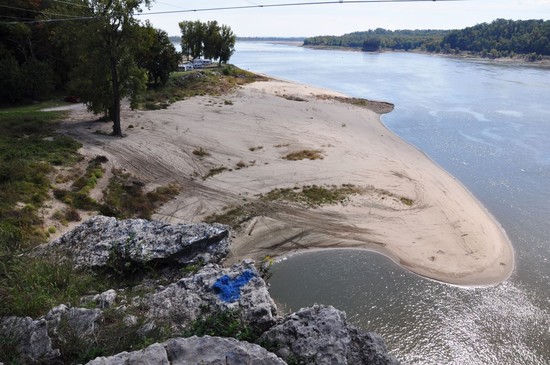 One of the natural arches is hard to reach, perched on a ledge near the top of the rock. 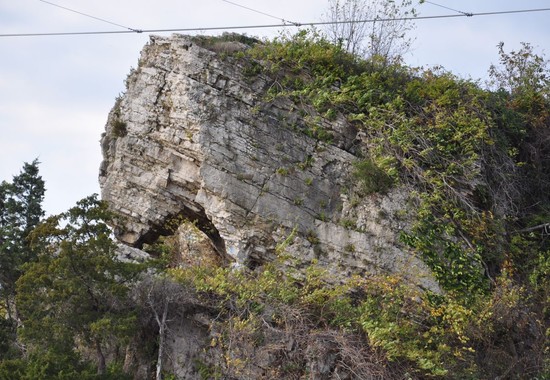 The second arch is closer to the river -- too close, in fact. It's often submerged by the water. When viewed from the Missouri side, "bathtub rings" can be seen above and below the arch, revealing how much the river level fluctuates. 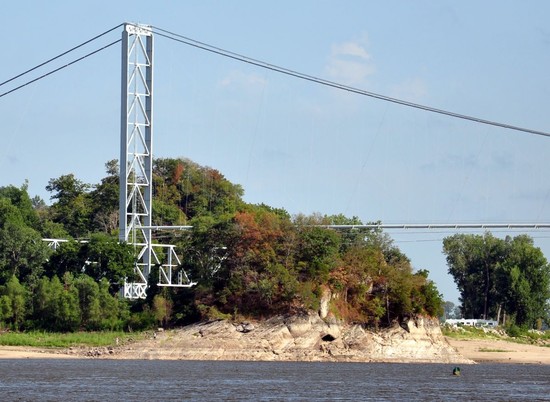 While the arch is large enough to crawl through, I'm not sure that it has the capacity to satisfy the devil's baking needs. 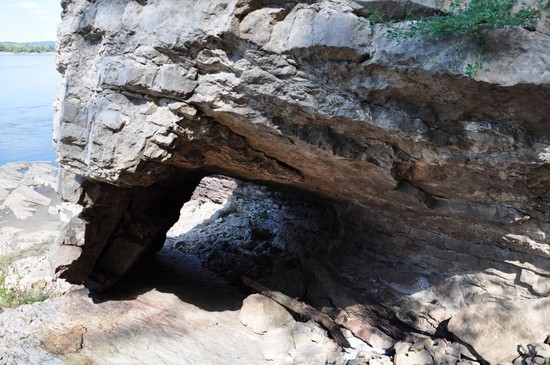 Shrouded with stories of river pirates, shipwrecks, and other disasters, the early inhabitants of Grand Tower imagined that the devil was all around. They gave names, such the Devil's Bake Oven and the Devil's Backbone, to nearby landmarks. A drawing from the 1850s shows this stretch of the river flanked by ominous rock formations with an almost other-worldly look. 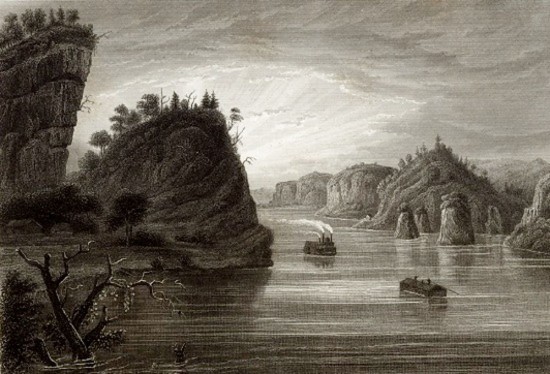 The scene changed quickly after the Civil War, as these many rock formations were blasted or quarried to make way for industry. Grand Tower boomed with the opening of iron furnaces, railroads, and river ports. These changes were driven by the Grand Tower Mining, Manufacturing and Transportation Company, which saw huge potential in the town's strategic location as an outlet for the coal mined at nearby Murphysboro. Louis Houck even participated in the boom, helping to finance a rail line connecting Cape Girardeau to Grand Tower via a river ferry.

Like most booms, however, this one eventually turned to bust. Floods, fires, and tornadoes have left the town a shell of its former self, a process that continues to the modern day. In 2008, Time magazine described Grand Tower as the "The Unluckiest Town in America."

A vestige of Grand Tower's industry can be found on the side of the Devil's Bake Oven. Stone ruins mark the location of a large house built for the superintendent of the iron foundry. 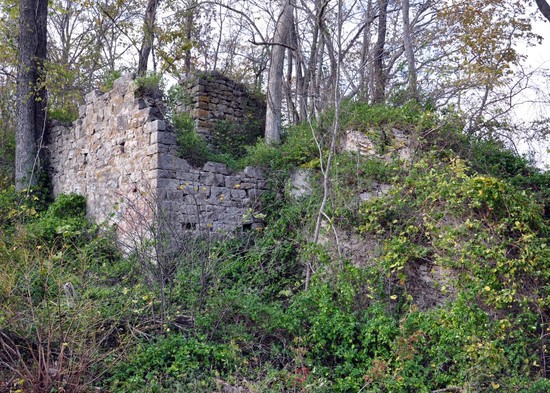 The ruins are in sharp contrast to a shiny structure that looms just overhead: a massive pipeline suspension bridge, one of the largest in the country. 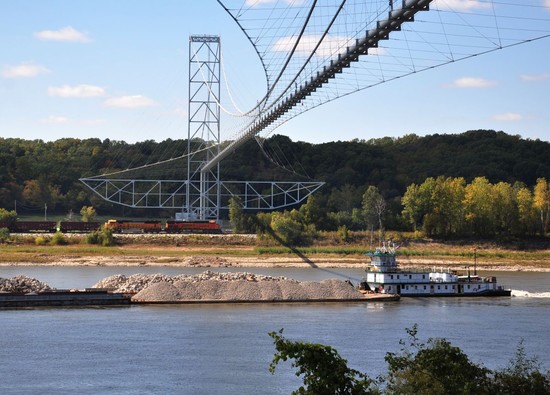 Built in the 1950s, this natural gas conduit fills the airspace immediately above the Devil's Bake Oven, creating a peculiar sight indeed. 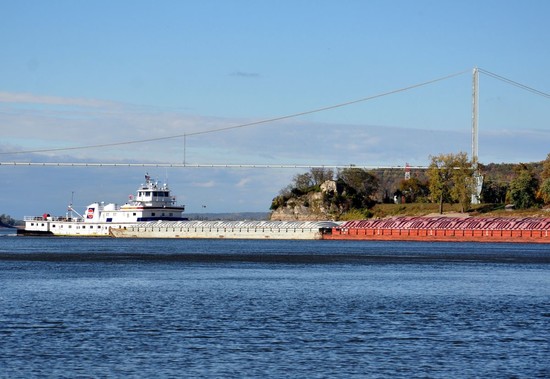 An old sign, which has since been removed, suggests that the bridge's catwalk was open to the public at some point. It's hard to imagine anything like that being allowed today! 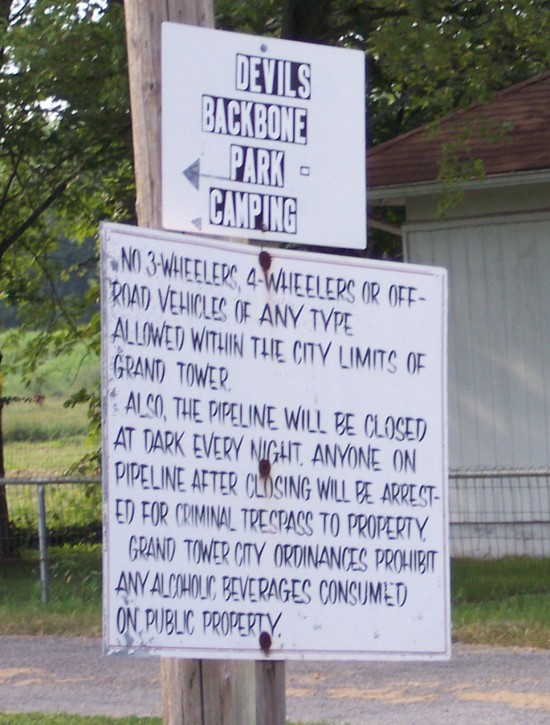 The bridge's towers and anchors are surrounded by barbed-wire fencing, but at least the Devil's Bake Oven is still open for exploration.

From Cape Girardeau, take Highway 146 east to Highway 3, turn left, and drive 25 miles north to Grand Tower. Turn left at the first turnoff for Grand Tower (shown as County Road 22 on some maps). Follow this road as it curves right and becomes Front Street. Continue on this street as it passes through town and veers right around the Devil's Backbone. At the next intersection, bear right on Brunkhorst Avenue, and then turn left on 20th Street. This gravel lane leads to the pipeline bridge and the Devil's Bake Oven.