This year marks the 200th anniversary of the creation of Cape Girardeau County.

Not that anybody has noticed. The big day, October 1, is upon us, but I haven't seen a peep from anywhere about this important milestone in local history.

Despite the lack of interest, here is a quick history of the county's formation. Our story begins when Missouri wasn't called Missouri and wasn't even a part of the United States. When this region, confusingly called Louisiana, was under the control of His Catholic Majesty, the King of Spain, the Spanish government had established a surprisingly large bureaucracy for an area that was still untamed wilderness.

As part of the bureaucracy, the region was divided into five "districts" or "commandaries" overseen by a commandant. The names of the districts are familiar: St. Charles, St. Louis, Ste. Genevieve, Cape Girardeau, and New Madrid. The commandant of the Cape Girardeau District, Louis Lorimier, oversaw an area that extended from Apple Creek on the north, the Mississippi River on the east, and New Madrid County on the south.

The western boundary was undefined -- basically as far west as Kansas, although few people had any reason to travel there. (Insert joke here about how that is still true today.) Otherwise, the rest of the boundaries have changed very little over the centuries.

In a bizarre development, Spain and France signed a secret treaty that exchanged Louisiana to France. But the French weren't sure what to do with the new territory, so they never bothered to take possession. The Spanish officials remained in charge for several more years waiting for the French to show up.

Instead, Napolean Bonaparte of France -- desperate for cash -- sold the Louisiana Purchase (complete with Spanish bureaucracy) to the American government at bargain basement prices. The Spanish departed (finally), but the Americans were faced with the same challenge as Napolean: what to do with this massive chunk of wilderness.

Taking the easy way out, the Louisiana Purchase was temporarily attached to the Territory of Indiana, with the capital at Vincennes, Indiana. In a proclamation, William Henry Harrison, Indiana territorial governor and future U.S. President, decided to maintain the five original Spanish districts as before. 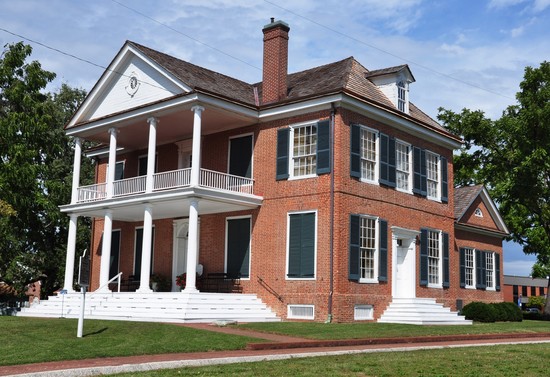 Even though the Cape Girardeau District continued intact, Louis Lorimier's power quickly diminished. He was a Frenchmen surrounded by American immigrants: not a good career situation for him.

For a brief time in 1804-05, Vincennes was the seat of government for a vast region second only to Washington, D.C. But this ended abruptly when Louisiana was made into a separate territory.

Then, in 1812, the State of Louisiana was formed, creating a huge source of confusion as the United States was now home to two different regions called Louisiana (the state and the territory). A few weeks later, on June 4, 1812, Louisiana Territory was rebranded as Missouri Territory. Unfortunately, the Congressional legislation provided no guidance on how Missouri should be pronounced. At least the spelling was consistent, avoiding the mess that would later plague Arkansas (originally spelled Arkansaw).

In creating Missouri Territory, Congress ordered Benjamin Howard, territorial governor, to draw "convenient" boundaries for counties and to arrange for elections. Just as William Henry Harrison had done, Gov. Howard took the lazy approach, reusing the five original districts from the Spanish regime. But this time they had been elevated to counties, soon to be enhanced with even more bureaucracy.

His proclamation -- on Oct. 1, 1812 -- therefore marks the official beginning of Cape Girardeau County. It's also the birthdate for the other four original counties of Missouri (St. Charles, St. Louis, Ste. Genevieve, and New Madrid).

Since Missouri Territory included what is now Arkansas, these five counties were exceptionally massive. This would quickly change as the population exploded and the region was divided into two states and hundreds of counties.

At first, however, Cape Girardeau County occupied a huge slice of the map. By the following year, 1813, two more counties had been created (Washington and Arkansas), but Cape remained untouched. 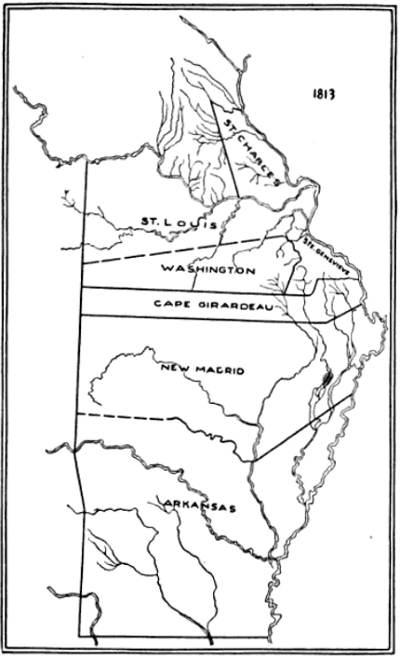 By 1819, however, the map was radically redrawn, with Wayne County given most of Cape County's western frontier. Wayne County was so large that it was called the "State of Wayne" during the 1820s. 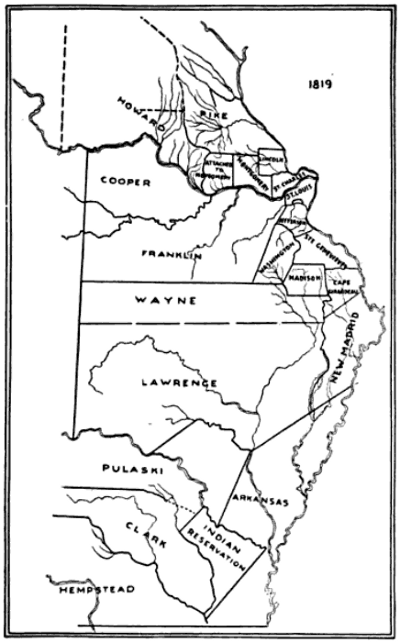 Cape County would be cut in two thanks to the formation of Bollinger County on March 1, 1851. Except for some minor adjustments with Stoddard and Scott counties, the boundaries of Cape County haven't changed since that time.

The next time you drive on I-55 and see the county boundary sign at the Apple Creek bridge, just consider that this line was first drawn by Spanish officials in the 1700s. It's older than Missouri itself.

Consider, too, that no other county in Missouri is older than Cape Girardeau County (although four are tied with the same birthdate). That's a reason to celebrate -- if anybody is paying attention.