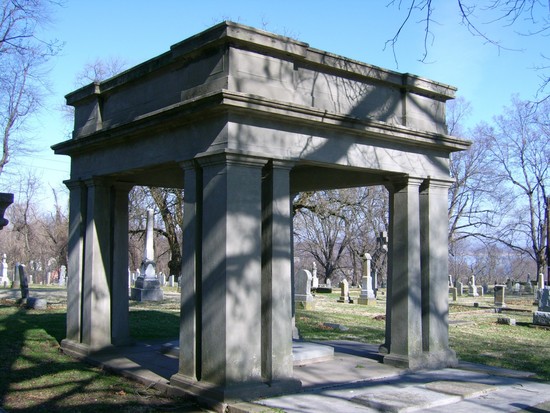 "The magnificent pagoda, classical in its lines, beautiful in the absense of jarring adornment, was the loving tribute of the citizenship, made possible by the loyal women of Cape Girardeau who compose the Cemetery Association."

That's how the Daily Republican newspaper described the concrete pagoda that was erected in 1917 to shelter the graves of Louis Lorimier and his wife Charlotte.

During the June 1912 centennial celebration of Lorimier's burial, the Nancy Hunter chapter of the DAR had discussed erecting a concrete structure over the graves to help protect them from further deterioration. Newspaper clippings, however, indicate that the pagoda wasn't built until five years later.

The ladies of the Cemetery Association announced their plans to build a pagoda in November 1916. During the next several months, the group held weekly card games to raise money for the project, finally reaching a point in May where they could proceed with construction. The Weekly Tribune newspaper reported on May 25, 1917:

LORIMIER PAGODA WILL BE ERECTED

The construction of the pagoda over the Lorimier graves will be started in a few weeks, the members of the Cemetery Association resolved at the meeting held yesterday afternoon at the home of Mrs. Carl Bauer on Broadway. The reports made by the solicitors of the association were so favorable that the erection of the pagoda, which had been contemplated for some time, was found possible with the funds raised by the annual collections and the money which the association receives annually from the city funds.

Several months ago the Cemetery Association advertised for bids for the construction of the pagoda over the Lorimier graves. Three bids were sent in at that time, but it was decided not to let the contract until the ladies had sufficient funds to defray the expense of erecting the building.

The Cemetery Association derives its income from the donations made by those families whose graves are taken care of by the association and the small donation made by the city every year. The balance is raised by assessments from each member of the association.

I wasn't able to find any newspaper articles revealing the project cost or the contractor that won the bid. Nevertheless, by August, the pagoda was completed and a large dedication ceremony was planned.

The Daily Republican announced on Aug. 4:

Lorimier Will Be Honored Sunday

The citizens of Cape Girardeau will at 4 o'clock Sunday afternoon honor the memory of the city's founder. A pagoda has been placed over the graves of Louis Lorimier and his Indian wife and this will be dedicated with special ceremonies tomorrow afternoon.

For more than a hundred years the storms of winter and the suns of summer have beaten down on the slabs covering the graves, until the inscriptions were beginning to become obliterated.

It was to preserve these historical tablets that loyal Cape Girardeau women erected the pagoda which will be dedicated Sunday afternoon.

The pagoda was given by the Cemetery Association. The program for the exercises will be: Dedication ceremonies by Very Reverend Thomas M. Levan, president of St. Vincent's college; presentation of wreath by Helen Uhl, lineal descendant of Louis Lorimier, to Louis Houck, who will place the wreath upon the grave of the city's founder, and who will then deliver an address. Following this address Judge B. F. Davis will deliver an eulogy, after which a large choir will sing the Te Deum.

A cordial invitation is extended by the Cemetery Association to all citizens to attend these exercises in honor of the city's founder.

Both newspapers labeled the event as an "impressive ceremony." The Daily Republican described it as a "solemn occasion, beautiful in its simplicity, sublime in its meaning and patriotic in its consummation." (Can you imagine a modern-day newspaper publishing a sentence like that?)

Despite the pagoda, the sandstone markers at the Lorimier graves continued to fall apart. The pagoda itself was showing signs of deterioration by 1940, prompting the Southeast Missourian to publish a story headlined "Tomb of city's founder is crumbling." The story warned that "unless something is done soon the shrine will be a shambles."

In 1952, the 150th anniversary of Lorimier's death, the pagoda was repaired and new grave markers were installed. Another dedication ceremony was held in which lineal descendants of Lorimier (Robert and Donald Jueneman) placed wreaths on the graves.

The original epitaphs for Louis and Charlotte, featuring both English and Latin inscriptions, were preserved in the newly installed granite markers.

To the memory of Major LOUIS LORIMIER, a native of Canada and first settler and commandant of the post of Cape Girardeau under the government of Spain, who departed this life the 26th day of June, 1812, aged 64 years and 3 months.

[Translation: Peace be to his bones and his ashes interred in this grave; May the eternal day illumine his immortal soul] 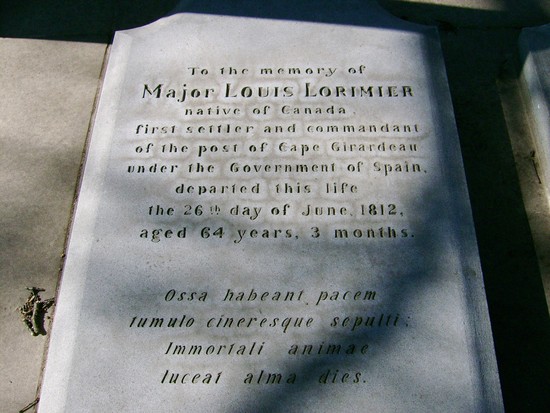 To the memory of CHARLOTTE P.B. LORIMIER, Consort of Maj. L. Lorimier, who departed this life on the 23rd day of March, 1808, aged 50 years and 2 months, leaving 4 sons and 2 daughters.

[Translation: She lived the noblest matron of the Shawnee race and native dignity covered her as does this slab. She chose nature as her guide to virtue and with nature as her leader spontaneously followed good as the olive, the pride of the grove, without the planter's care yearly brings its fruit to perfection.]

The Latin epitaph for Louis is fairly straightforward, but I have no idea what Charlotte's inscription is supposed to mean. We can only add this to the pile of riddles involving Lorimier and his family. 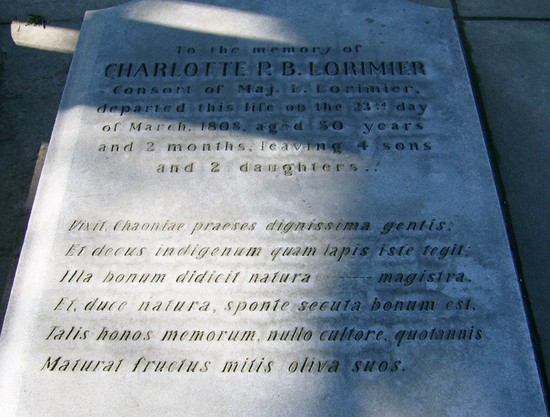 Reminder: The bicentennial commemoration of Louis Lorimier's death is this Sunday, June 24, at Old Lorimier Cemetery from 4-6 PM. It's going to be hot, but the cemetery has plenty of shade. I recommend bringing lawnchairs.