A not-so-brief history of Fruitland

Southeast Missouri is filled with numerous mysteries involving place names. Where did Seventy-Six in Perry County come from? How did a town without any marble get to be known as Marble Hill? Is Fredericktown named for George Frederick Bollinger, Frederick Bates, Frederick the Great, or some other guy named Fred? Why has everybody always pronounced New Madrid, Cairo, Vienna, and other names completely different than their Old World counterparts?

The town of Fruitland poses another difficult problem. According to conventional wisdom, the name refers to a fruit orchard planted in the area. This idea is backed by the Ramsay Place Name File compiled under the direction of Robert L. Ramsay at the University of Missouri. Mayme L. Hamlett, who researched Cape Girardeau County for the project in the 1930s, concluded that Fruitland "was named from the nursery for fruit trees established there by Edgar Wallace." 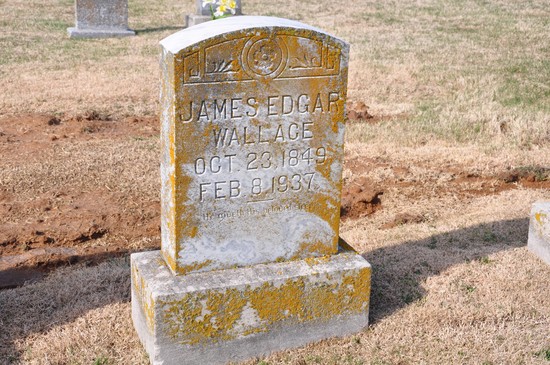 The grave of James Edgar Wallace at Pleasant Hill Cemetery

James Edgar Wallace, according to an obituary in the Southeast Missourian (Feb. 8, 1937), "spent most of his life near Fruitland, where he formerly operated a nursery." His death certificate lists an occupation of "Nurseryman - Retired."

Sounds good, right? Well, maybe. The study of place names (toponymy) is rarely this easy. In a 2007 newspaper story about Fruitland, historian Dr. Frank Nickell mentioned that the name had nothing to do with fruit growers. "There were no orchards there," he said.

Another newspaper clipping, from 1949, supports this idea. Fruitland was "so named because early residents thought the high, rolling area would make good fruit-growing country, but no extensive orchards were ever planted."

While the origin of Fruitland is murky, we do know the origin of Pleasant Hill, the name that came before Fruitland. John Oliver, Sr., settled with his family on Indian Creek in the 1810s. He dubbed his estate Pleasant Gardens.

The "Pleasant" name carried over to Pleasant Hill Presbyterian Church and then Pleasant Hill Academy. Founded by John Oliver, Jr., the academy (under the umbrella of the Presbyterian church) was one of the first schools of higher learning in the area. 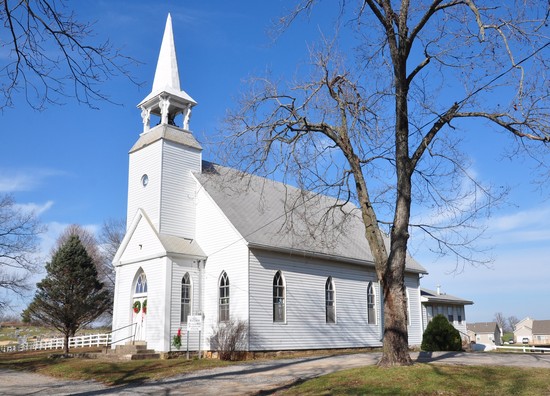 Meanwhile, the "Hill" in Pleasant Hill was a logical choice. The area occupied high ground at the headwaters for major creeks in all directions: Indian Creek to the east, Hubbell Creek to the south, Byrd Creek to the west (via Horrell Creek) and Apple Creek to the north (via Shawnee Creek).

Most atlas maps from the time of the Civil War until the 1880s clearly show Pleasant Hill as a village on the road between Jackson and Perryville. It was during this time -- 1869, to be exact -- that the name "Fruitland" was first used in the form of the "Fruitland Normal Institute."

This school was founded by Professor James Hutchinson Kerr, a Pennsylvania native. After graduating from Yale University in 1865, Kerr turned down a job as the Assistant Geologist of Mexico, instead opting to move to Cape Girardeau County. He was soon appointed as the first superintendent of the county public school system.

The public schools needed teachers, which meant that the region needed a school to train the teachers. That was the basis for the Fruitland Normal Institute, which Kerr hoped would eventually become a regional university. However, that plum went to Cape Girardeau in 1873 as the newly selected home for the Third District Normal School, now Southeast Missouri State University.

Dr. Joe P. Dunn, a professor at Converse College in South Carolina, is currently preparing a book on the life of Professor Kerr. I expect this will be an interesting biography, as Kerr sounds like quite the renaissance man.

In a brief sketch for American National Biography Online, Dunn writes that Kerr "was a prolific author of letters to newspapers in which he advocated labor and women's rights, education reform, improved roads, opposition to capital punishment, and promotion of service to humanity; he also challenged the traditional religious thought and practices of the day."

Those were some heady political beliefs to hold in rural Cape Girardeau County in the years following the Civil War. As a transplanted Yankee, Professor Kerr probably stuck out like a sore thumb in this part of the country. Nevertheless, his career continued to blossom during the early 1870s. Dunn explains that "Kerr served simultaneously as county superintendent of schools, president of the county teachers association, vice president of the state teachers association, lecturer and curator of the state university, and organizer of more than two hundred teacher training institutes."

After contracting tuberculosis, Kerr decided to move to Colorado Springs in 1874, believing that Colorado would be healthier than Missouri. He became a professor at Colorado College in 1875. In addition to his teaching, he was involved in mining, metallurgy, surveying, lawmaking, and railroad building, with some of his projects taking him to Central and South America. Until his death in 1919, Kerr kept an extensive stack of personal papers, which are now housed in a special collection at Colorado College.

After Kerr's departure, the Fruitland Normal Institute seems to have continued for a short time, but then disappears from the historical record. The State Commissioner of Education reported that the institute was an active normal school in 1875 with a library containing 1,000 volumes. However, I haven't been able to find any references to the school past that.

According to Dr. Nickell, the village of Fruitland was platted by Elam Templeton. This was likely the older part of the town located near the intersection of modern-day Highway 61 and Route FF. 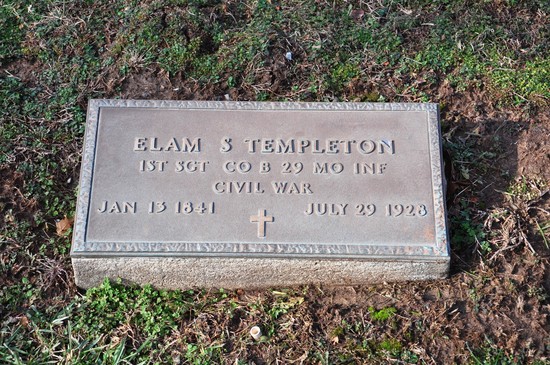 The grave of Elam Templeton at Pleasant Hill Cemetery

The Fruitland name apparently didn't stick at first, with maps from the 1870s and 1880s continuing to show the area as Pleasant Hill. It wasn't until Fruitland post office was established in 1886 that mapmakers started to drop Pleasant Hill in favor of Fruitland.

Fruitland received a boost in 1905 when Louis Houck brought his Cape Girardeau Northern Railroad through the village, a waypoint on the line between Cape Girardeau, Perryville, and beyond. The C.G.N., however, was a money-losing albatross, and service through Fruitland was suspended in 1919. The tracks were removed in the 1920s just as Fruitland was chosen as the route for a new state highway (Missouri 25, now U.S. 61).

Of course, the biggest boost came in the 1960s and 1970s with the opening of Interstate 55 and an interchange at Fruitland. 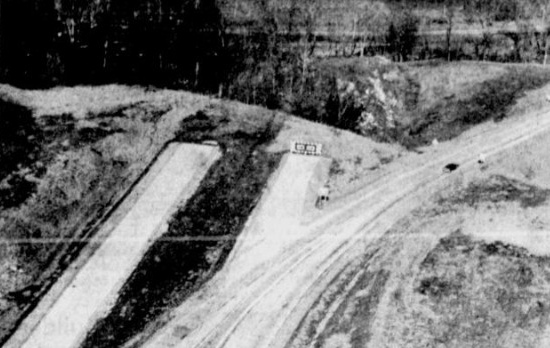 This photo from the Feb. 21, 1968, Southeast Missourian shows the newly built I-55 terminating at Fruitland. The gap northward from Fruitland to Festus was completed in 1972.

The opening of the Charmin plant near Neelys Landing in August 1969 was also a huge plus, as many of the workers settled in the Fruitland area.

Even with its favorable location and growth over the years, Fruitland has resisted forming its own government in the past. A soil survey map from 1912 shows Fruitland surrounded by a dotted line, suggesting that the town was incorporated, but I haven't been able to find any evidence that Fruitland ever did so. 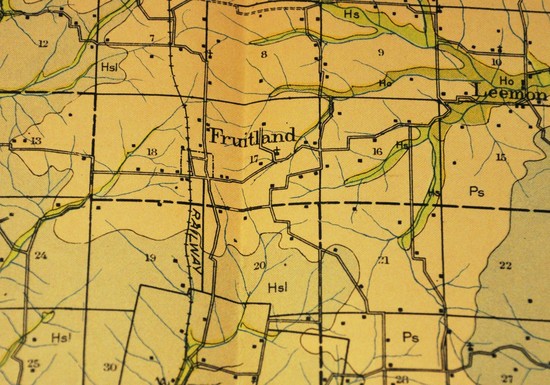 Now that Jackson is attempting to annex a portion of Fruitland, let's hope that Fruitland's identity and history aren't lost in the shuffle.