Another oddity in the Shawnee National Forest

Here's a riddle: What landmark in Illinois has water on four sides, but is not an island?

The answer is Hogg Bluff, an isolated mass of sandstone that is bordered by a beaver lake on three sides and by a creek on the fourth side. 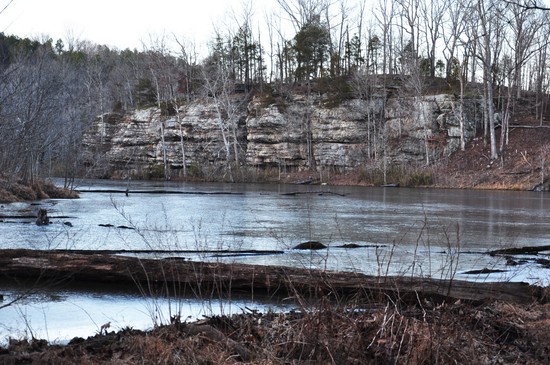 A narrow, horseshoe-shaped canyon separates Hogg Bluff from the hills to the north, west, and south. This was probably the ancient route of East Branch Cedar Creek, which now flows on the east side of the bluff. 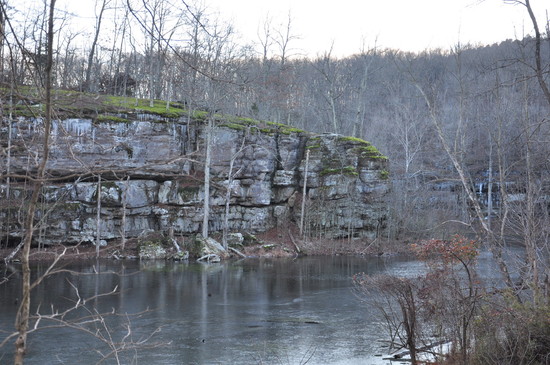 When the Illinois Central Railroad built a rail line through here, the canyon was cut off, forming a small lake. The rails are long gone, but the old railbed has been converted into a road and hiking trail, providing access to the bluff. 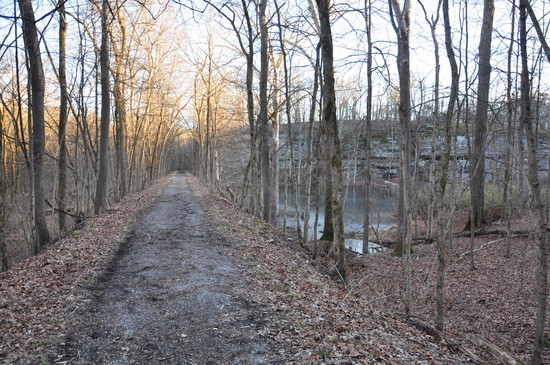 Beavers, and their relentless engineering activities, have helped maintain the level of the lake. 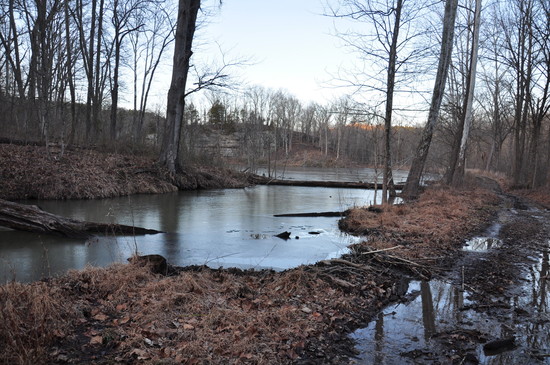 Since Hogg Bluff is flanked by cliffs and water on three sides, reaching the top requires climbing a trail on the east side. The hilltop is fairly flat, and covered in a luxurious carpet of moss. 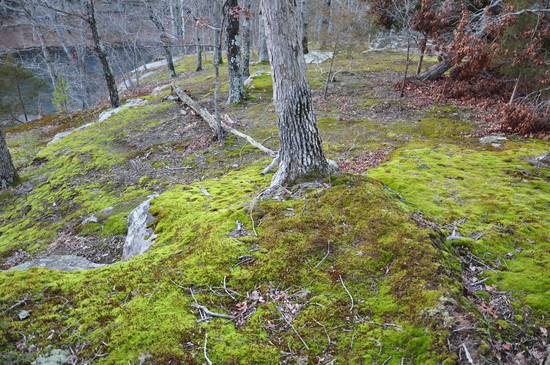 At the far tip of the bluff, overlooking the lake, small rocks provide built-in chairs. 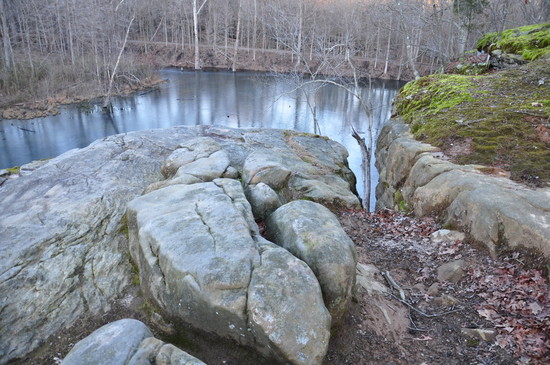 The edge of the bluff provides clear views across the lake and canyon to the cliffs on the other side. Just don't get too close to the edge. 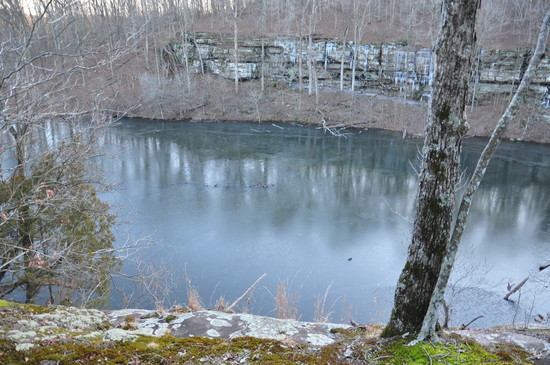 In medieval England, a place like this would make the perfect setting for a large castle. It's easily fortified and even has a built-in moat on three sides. One rock overhang, with its commanding view of the lake below, would make a throne fit for a king. 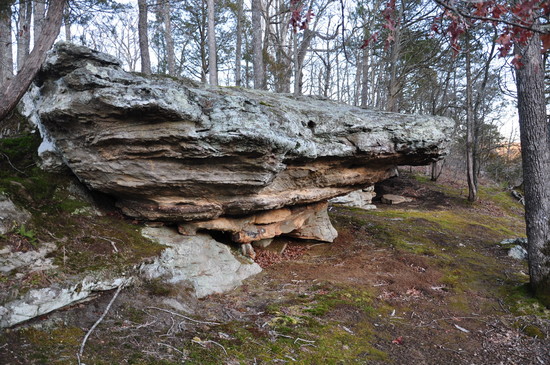 Native Americans did build a "stone fort" at this location, although it was probably more of a ceremonial site rather than a fortification. Hogg Bluff is one of 11 known stone fort sites in Southern Illinois. However, very little trace remains. Another stone fort at Giant City State Park has been partially reconstructed, giving an example of what Hogg Bluff's prehistoric stonework may have looked like. 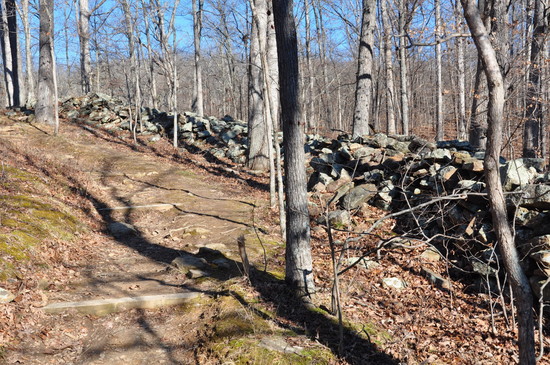 Hogg Bluff is a short 0.6 mile walk along the flat, but sometimes muddy, railroad grade. The old rail grade continues north past the bluff, cutting through a hillside, until it reaches a gate marking the edge of Camp Ondessonk. On the day I visited, the rockcuts were drenched with icicles. 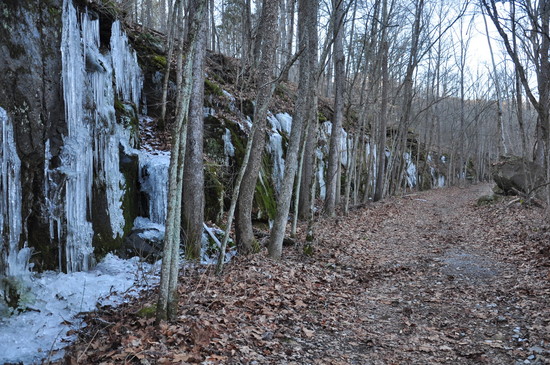 From Cape Girardeau, cross the Emerson Bridge and take Highway 146 through McClure, Ware, Jonesboro, Anna, and Vienna. Just past the I-24 interchange on the opposite side of Vienna, turn left on Highway 147. Go 6.4 miles and turn left on Gilead Church Road (County Highway 4). Follow this road for almost a mile and bear right on Gum Springs Road. Follow this paved road 1.6 miles to a bridge over Cedar Creek. On the left, just beyond the bridge, turn left into the parking area. 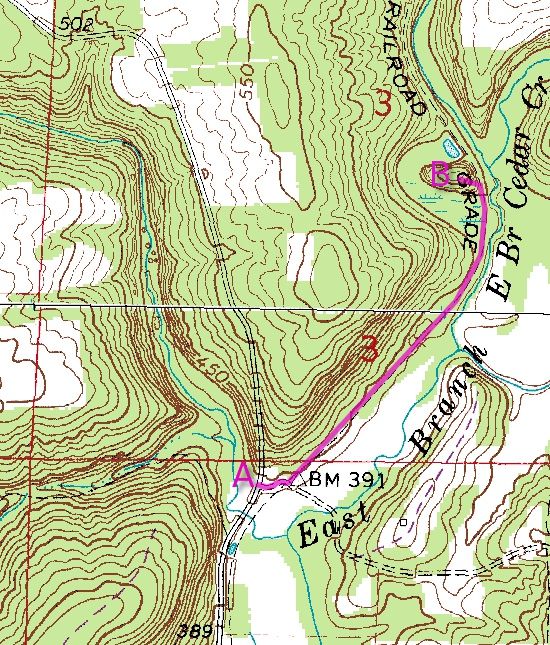 From the parking lot ("A" on the map), cross the paved road and walk east along an unmarked gravel county road. Look for a "ONE LANE BRIDGE" sign and a dirt road that branches off to the left. Take this dirt road (the old railroad bed) and follow it to Hogg Bluff ("B" on the map).

The parking lot also provides access to other interesting hiking trails; I'll have more on that in future blogs.