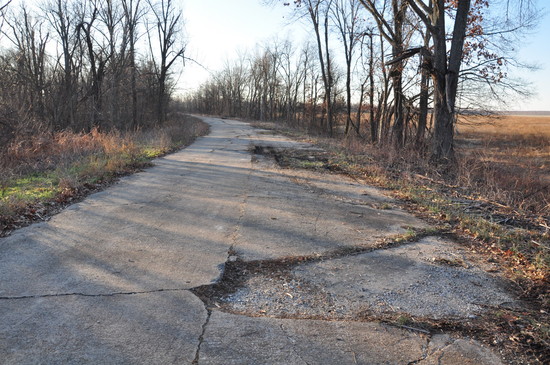 This stretch of Old Highway 3 in Alexander County, Illinois, has seen better days, yet the concrete pavement from the 1930s is still drivable.

It's a question I hear all the time: "How do you find these places?"

Of course I don't want to give all my secrets away, but in a nutshell, I carefully study a variety of maps, looking for certain tell-tale clues that look interesting. Then I go investigate.

Take, for example, this excerpt from the "General Highway Map" of Alexander County, Illinois, which recently caught my attention. 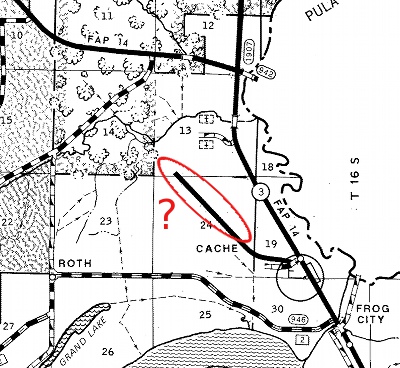 The thick solid lines usually represent a major highway. So why is there a major highway that seems to go nowhere? Something mighty peculiar is happening here, I thought, and added this item to my to-do list. According to the map, I would need to take Highway 3 to a wide spot in the road known as Cache, and turn right.

Cache, as it turns out, is just a couple of houses, and I missed the turnoff the first time. But on the way past, I did spot a road sign announcing that this mystery Highway to Nowhere was called Singing Bridge Road. When I returned, I found this: 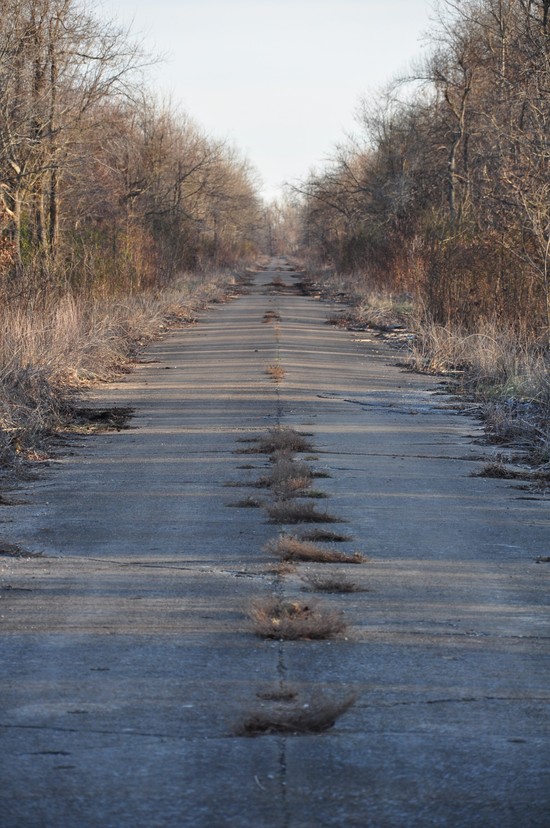 It's another vintage stretch of concrete highway, similar to the one I described at Bird's Point, Missouri. This highway is wider (20 feet versus 16 feet), suggesting that it isn't quite as old as the Missouri road.

I continued driving, hoping that this was, in fact, a public road and that I hadn't stumbled across private property. After 1-3/4 miles, the road came to an abrupt end at a barricade -- just as the map had indicated. I was relieved to see a welcome sign and hunter check-in station for Horseshoe Lake State Fish & Wildlife Area, which meant that I wasn't trespassing on private property. 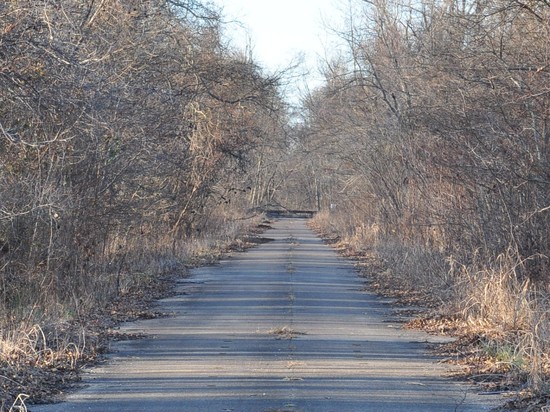 The pavement, although partially buried in dirt and leaves, continued past this point. I walked along the old highway, straight as an arrow, and then came to a puzzling sign: 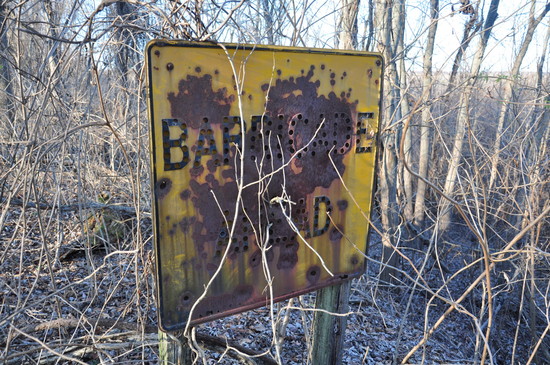 Wasn't the barricade already behind me? I wanted to continue ahead and try to find an explanation for the ancient sign. However, the undergrowth quickly became too thick, and there's nothing worse than trying to hike through a wall of sharp thorn bushes. 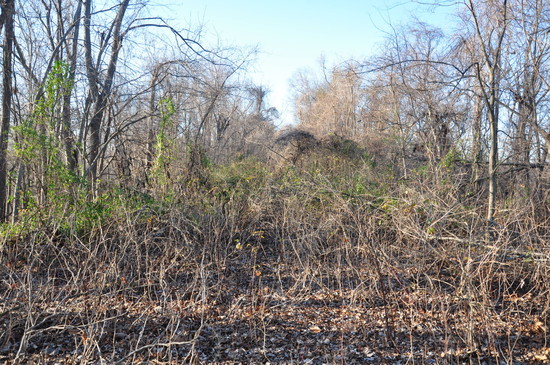 Back at my truck, I studied the maps again and decided to try approaching from the opposite direction. Assuming that the old road continued on a beeline to the northwest, it would strike Promised Land Road and then meet Highway 3 to the southeast of Olive Branch. Sure enough, I found a pull-out along Promised Land Road that marked the old intersection. A faint trail followed the old roadbed to the northwest, providing a view of a small lake. 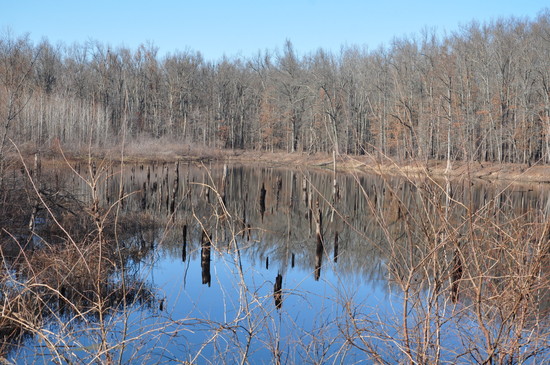 Snaking through the weeds and undergrowth, the trail continued along the road. This stretch was devoid of concrete pavement, with only a few isolated patches of asphalt providing any clue that this was once a major highway. 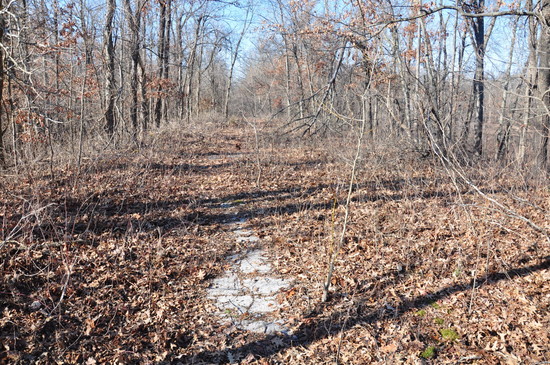 However, as the old road approached modern-day Highway 3, I started to see more concrete slabs. Movie directors should take note: this would make an excellent setting for a post-apocalyptic film. 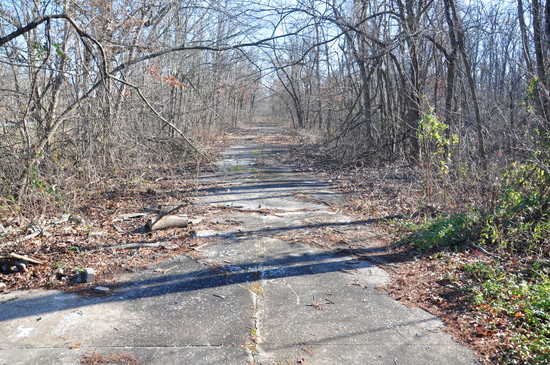 Retracing my steps back to Promised Land Road, I cross the road and investigated the other direction. Here the roadbed is missing, replaced by swampy ground studded with a series of sawed-off timber bridge pilings. 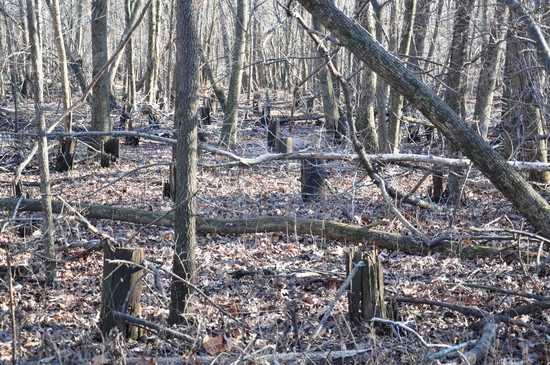 Was this the location of the Singing Bridge? I wanted to explore the area further -- and perhaps retrace the road alignment back to the barricade on Singing Bridge Road -- but wet ground and rapidly dwindling daylight meant that I would have to return another day.

After studying additional maps and spending some quality time on Google, I've been able to confirm that this concrete slab was built as Illinois Highway 150. 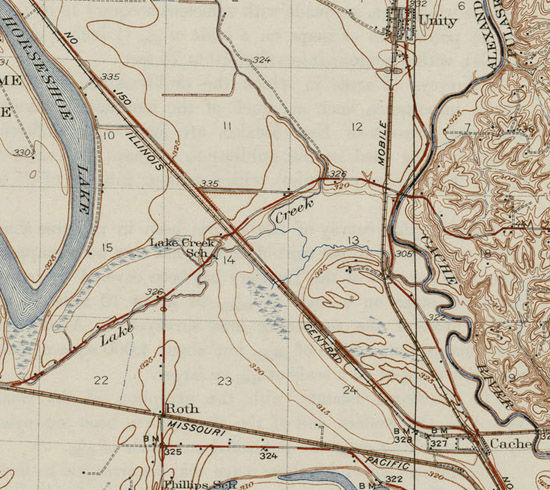 During the Flood of 1937, the road provided the only access to Cairo. That same year, it was re-numbered as Highway 3, completing a highway corridor connecting the St. Louis area with Cairo. It's not exactly clear when the highway was moved to its current-day route to the north, although official Illinois maps from 1928, 1947 and 1951 show the old road while the version from 1955 shows the new road.

It seems odd that the state would abandon a perfect good highway in favor of a more roundabout and longer route. However, if the old concrete thoroughfare did in fact feature a "Singing Bridge" -- which suggests a rickety wooden structure that made noises when cars drove across -- then it probably made logical sense to build a new road on drier ground that avoided the swampland surrounding Horseshoe Lake.

While much of the original highway was been reclaimed by nature, the portion near Cache is still intact, providing a glimpse of what travel was like in the 1930s. Just like the remaining concrete highway at Bird's Point (only 11 miles away as the crow flies), this old road would make a fine nomination to the National Register of Historic Places.