Take a drive on a gravel superhighway

This highway is completely flat with gentle curves, very little traffic, and no stop signs or stoplights for miles. It's also an "interstate" highway that touches two states.

Sounds like a nice superhighway, right? There's just one catch. It's mostly a gravel road.

I'm talking about the levee road along the Mississippi River between McClure and Grand Tower, Illinois.

The official county maps for Alexander, Union, and Jackson counties show that the levee is a public road. It starts at the access road to Devil's Island in McClure and then runs north, parallel to Highway 3. 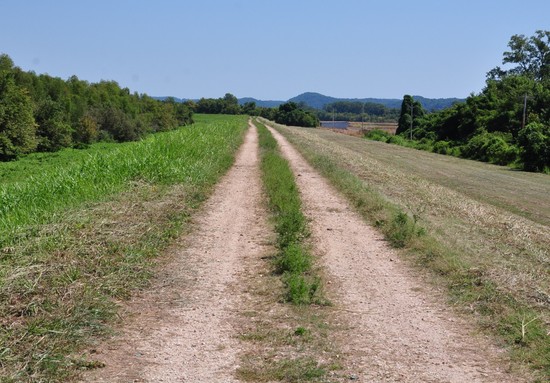 Seeing little traffic, this first stretch is the most wild. Two tracks run through tall grass, obscuring the potholes ahead. Despite the primitive road conditions, the road truly is a highway (it stands high above the surrounding terrain). It even has signs, a big deal in Southern Illinois. The road's name, Mississippi River Levee Road, isn't the most creative, but it gets the job done. 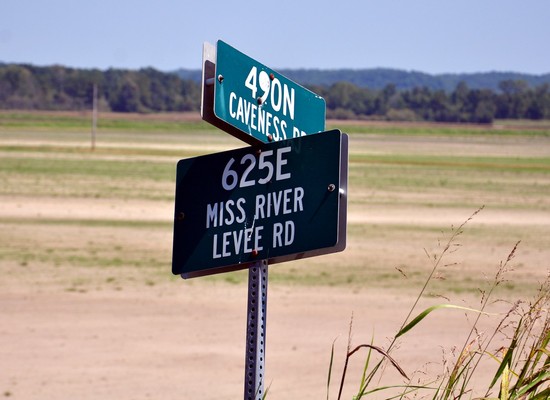 After curving around Devil's Island (to the left), the levee road provides a clear view of the peaks along Atwood Ridge (to the right). 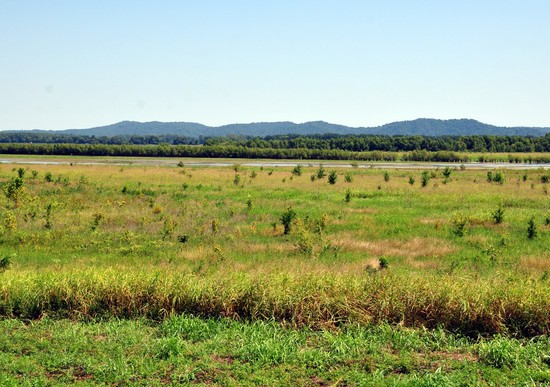 Soon the road passes a feedlot that appears to be abandoned. 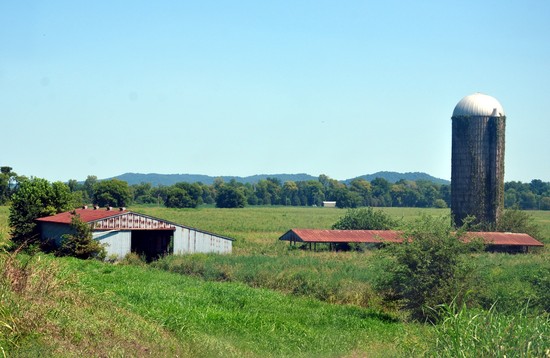 Suddenly the levee road becomes blacktop as it intersects Caveness Road, a connection to Highway 3 and Union County Conservation Area. The road briefly turns toward Bald Knob Cross, far in the distance. 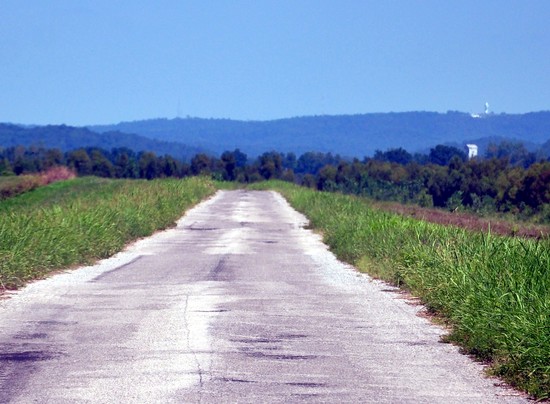 Before long, the paved road veers off the levee, leaving behind a gravel road again choked with tall grass and potholes. Then the levee intersects Levee Access Road (another creative name), a higher quality gravel road. Near this intersection is the site of Willard Landing and Green's Ferry, the river crossing used by some of the Cherokee during the Trail of Tears to reach Missouri.

Even though the levee follows the Mississippi River closely, trees make it nearly impossible to see the river itself. I was only able to glimpse the river from one spot. 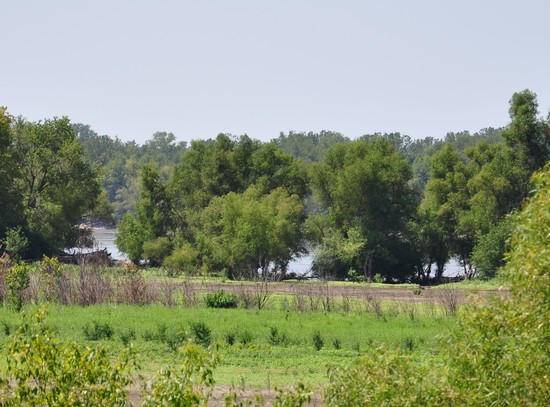 The view to the east is more spectacular as the vast floodplain continues all the way to the Pine Hills. 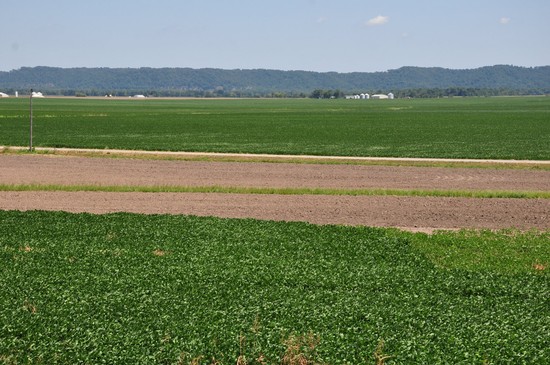 Following another short blacktop stretch, the levee eventually makes a sweeping curve to the right as it approaches Big Muddy River. 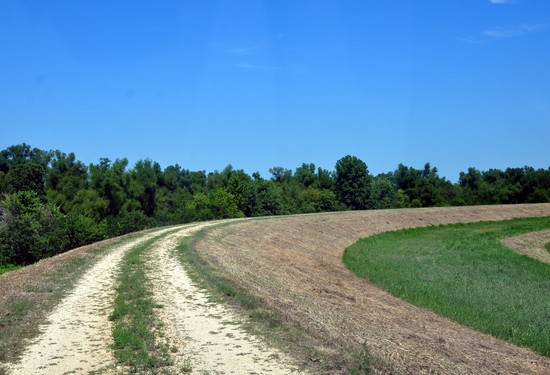 Heading away from the Mississippi River, the levee road smacks into Highway 3. After turning left on to Highway 3, crossing a bridge over Big Muddy River, and then making an immediate left turn on Island Road, it's possible to continue on the Mississippi levee toward Grand Tower. This stretch provides even better views toward the Pine Hills. 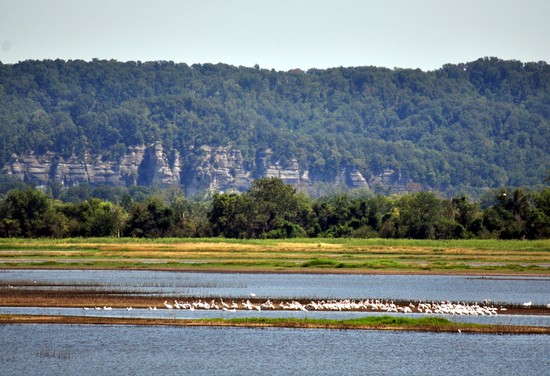 This area was recently inundated by floodwaters, making a mockery of the irrigation system. 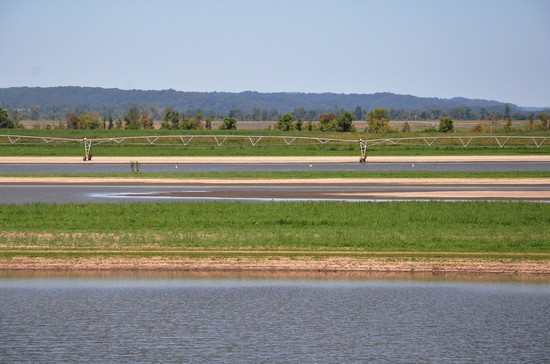 Meandering to the northwest, the levee road crosses an old channel of the river, forming a horseshoe-shaped lake. The land in the middle of the lake is called Grand Tower Island. And it's a part of Missouri. 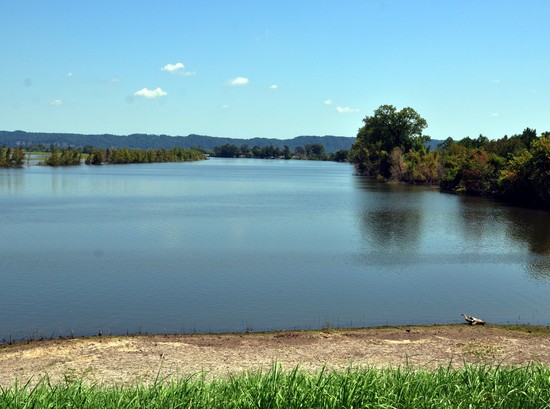 The old river channel was the original boundary between Missouri and Illinois. It takes an act of Congress to change the state lines, but it only takes a big flood to change the course of the river. As a result, the levee road passes into Missouri and back again without going near a single bridge. Don't expect to see any "Welcome to Missouri" signs, however. The road is completely signless. 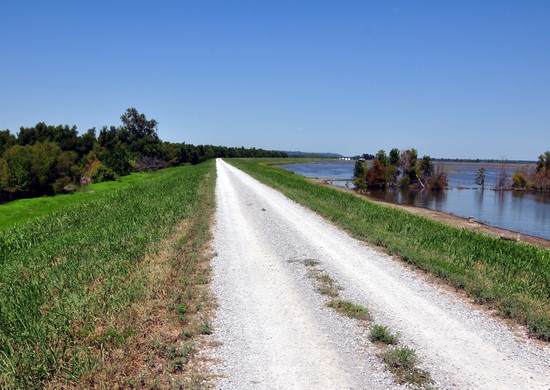 One farm occupies the Missouri side of the border. 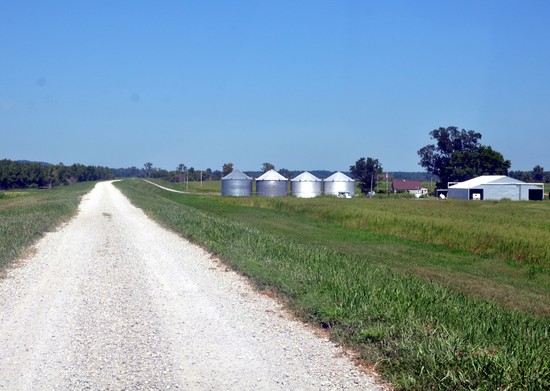 Soon the road traverses the old river channel again and turns to blacktop. This must be the Illinois state line. 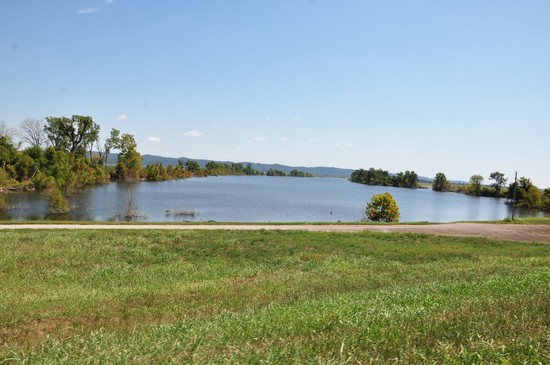 Heading into the town of Grand Tower, the blacktop road veers off the levee for the final time. At the northern end of the levee, where it meets a ridge called Devil's Backbone, a picnic shelter provides a view across the river to Tower Rock. 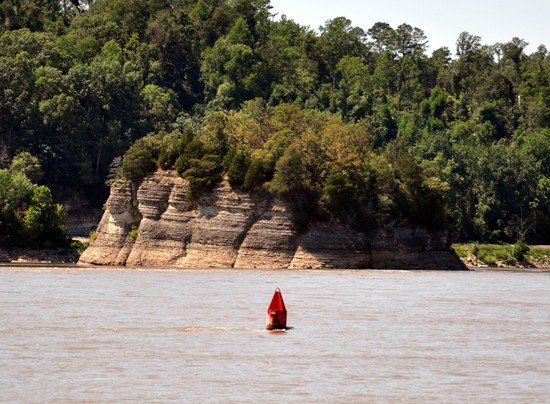 Sure, it would be much easier to drive to Grand Tower via Highway 3. But the Mississippi River levee road is a scenic alternative devoid of traffic and speed traps. Just watch out for the potholes, and don't expect to go very fast.

To do the whole thing:

At each intersection, stick to the high ground of the levee. Road conditions vary wildly, but the whole levee is open. The only turn is at Highway 3; turn left to cross the bridge and then turn left again on Island Road to rejoin the levee. Finish at Grand Tower.

To skip the part near McClure:

The beginning of the levee road is the most hairy. To skip this section, take Highway 3 north to the junction with Refuge Road. Turn left on Caveness Road and take this blacktop road on to the levee and continue from there.

To only do the Grand Tower Island part:

Take Highway 3 north through Ware and Wolf Lake to the bridge over Big Muddy River. Turn left at the first gravel road (Island Road). Follow the levee road across Grand Tower Island, Missouri, to where it ends at the town of Grand Tower.