"In 1867, St. Louis had a population of 204,000 people. This was only four thousand more than their rival city, Chicago. To stay ahead of the competition, St. Louis must have a bridge."
-- Rosemary Yager, James Buchanan Eads: Master of the Great River

Over the years, several prominent engineers had crafted elaborate designs for a Mississippi River bridge at St. Louis. They were all shot down as impractical or too expensive.

Both companies broke ground on their respective bridges, hoping to gain enough of a lead to knock the other out of contention. The book Rails across the Mississippi by Robert W. Jackson goes into extreme detail on the legal, political, and engineering battle between the two factions. Many people in St. Louis had doubts about the intentions of Boomer and the Illinois company.

Boomer hailed from Chicago, after all. His firm was one of the contractors on the hated Rock Island Bridge, a structure that had made a serious dent in the economy of St. Louis. To top it off, a branch of the Boomer company had built the ill-fated Gasconade Bridge which had killed several well-known St. Louisans, including James Eads' busines partner, Calvin Case.

To alleviate public opinion, Boomer resigned as president of the Illinois company and three St. Louis businessmen were added to the board of directors. Robert Jackson writes, "For several weeks after the organizational shakeup, the two bridge companies fought a public-relations battle in the pages of the St. Louis newspapers. But the Eads group was clearly winning the battle for the hearts and minds of the St. Louis business establishment. No one, it seemed, could accept that Boomer, who still held a majority of stock in the Illinois and St. Louis Bridge Company, might have anything but evil intentions in regard to erection of a bridge at the doorstep of Chicago's greatest rival." 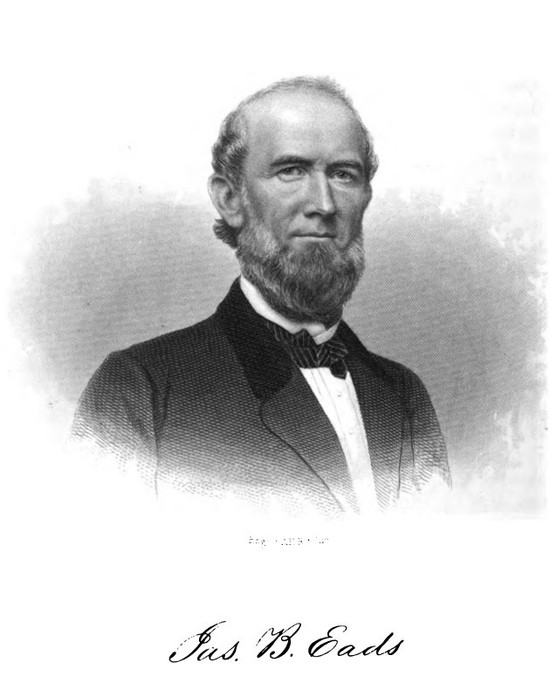 Portrait of James B. Eads in the book Saint Louis: the Future Great City of the World

It was clear that neither company could raise enough money to build a bridge while the competition was around. The boards of both companies agreed to consolidate. Eads and Boomer both believed that each had enough clout to retain control over the united company. Boomer was wrong, however, and was quickly forced out after Eads was elected as chief engineer.

The new company successfully lobbied Congress for an exclusive charter to build the bridge, preventing any future competition. However, steamboat interests, who were opposed to the bridge as an obstacle to navigation, were able to add a provision requiring that the bridge have a main arch span of 500 feet. They figured such a bridge would be nearly impossible to build.

Eads, however, had intended to build such an audacious bridge all along. And he got the job done, although it wasn't finished until 1874.

Construction was delayed by financial problems, political battles, engineering obstacles, bad weather, and natural disasters. Unlike the Rock Island Bridge, which had been built cheaply with wooden spans, Eads wanted his bridge to be a permanent monument that would stand the test of time. He designed massive stone piers, sunk deep to bedrock. His arch spans would be made from steel, a material that had never been used on a large scale. This was all very expensive, requiring Eads to travel the globe to raise capital. It also meant that construction was a slow process. 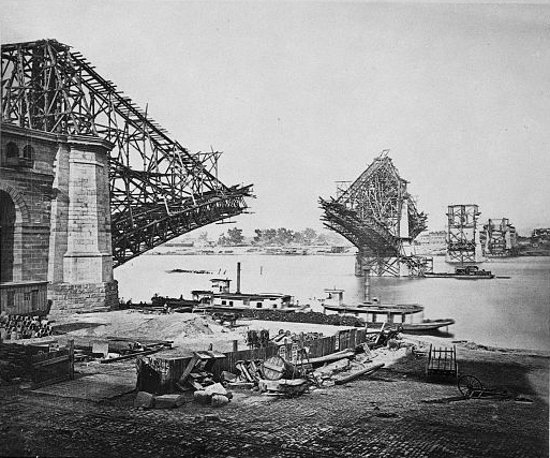 Eads got his way, building a bridge that has stood the test of time. In contrast, the wooden bridge at Rock Island only lasted 16 years before it was replaced by an iron bridge. St. Louis, however, may have been better served by a cheaper bridge that could have been built faster.

Anticipating that the bridge would turn the tables on their rivalry, St. Louisians were dreaming big. A convention, featuring delegates from 21 states and territories, was held in Oct. 1869 to discuss the feasibility of moving the nation's capitol to St. Louis. A committee was formed to lobby Congress. The secretary of the committee, Logan U. Reavis, wrote a book called Saint Louis: the Future Great City of the World. He wrote, "Henceforth St. Louis must be viewed in the light of her future, her mightiness in the empire of the world, her sway in the rule of States and nations. Her destiny is fixed."

Of course, this was mostly hot air. St. Louisans were desperately trying to find a comeback for the prize that Chicago had just scored: the transcontinental railroad. The new railroad, completed in 1869, didn't technically reach Lake Michigan -- the eastern terminus was at Omaha, Nebraska -- but it followed a northern route that would funnel traffic through Chicago.

In the book Empire Express: Building the First Transcontinental Railroad, author David Haward Bain explains the history of how the route was selected. During the 1850s, Congress was deadlocked on the issue. Bain writes, "The clamor went beyond the struggle of North against South; it was an anarchy of state against state, county against county, city against city, township against township. By then no one was uninvolved in the question--and because everyone was involved, the obvious result was stalemate."

The question was finally settled in the middle of the Civil War, precisely the time when Southern states didn't have a say in the matter. Congress, naturally, favored a northern route that stayed far away from slave states (such as Missouri). By executive order, Abraham Lincoln fixed the eastern terminus at Omaha. The fact that "Honest" Abe had a personal interest in some real estate at Council Bluffs, Iowa -- directly across the river from Omama -- was purely coincidental. (Wink, wink.)

Despite losing out on the first transcontinental railroad, Missourians hoped to find a silver lining as more rail lines were built westward. These would tap into the Union Pacific Railroad -- and, eventually, interconnect with additional transcontinental routes. The completion of a railroad bridge in 1871 over the Missouri River at St. Charles provided a direct connection between St. Louis, northern Missouri, and beyond. But St. Louis still needed a bridge over the Mississippi River if the city wanted to compete with Chicago's rail network.

In the meantime, the Great Chicago Fire of 1871 seemed to provide a golden opportunity for St. Louis to pull ahead of its rival. But Chicago turned the disaster into an advantage. Rosemary Yager wrote in James Buchanan Eads: Master of the Great River, "Because of this disaster, Chicago became known all over the world, and European and American businessmen sympathetically offered to invest huge sums of money to rebuild it. This made St. Louisians fearful that their rival might win out in the long race over size and population. They now looked at the great cost of building the bridge from a new angle. The important thing was that it be finished before Chicago recovered from its setback." 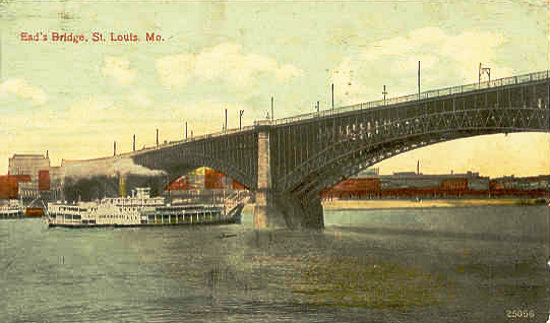 This postcard shows the SS Cape Girardeau passing under the Eads Bridge.

Unfortunately for St. Louis, the long-awaited bridge turned out to be a bust. When it was dedicated to much fanfare on July 4, 1874, the bridge didn't really connect to anything on the Missouri side. The tracks passed through a poorly-ventilated tunnel under the downtown St. Louis streets, then ended at grimy Mill Creek Valley. Planners had envisioned a large passenger station there, but the first station wasn't built for another year, leaving the bridge without regular passenger service.

Meanwhile, the bridge promoters had always figured that shippers and passengers would stop using the ferry boats as soon as the bridge opened, driving a stake in the heart of the "vampire" ferry company. However, the Wiggins Ferry Company wasn't about to give up its monopoly. The company fought back by temporarily lowering its rates. Without adequate transfer facilities on the Missouri side, the railroads continued to use the established ferries. Wiggins also upgraded its passenger boats, hoping to lure pedestrians who didn't want to walk across the lengthy bridge in the hot sun.

The bridge company, saddled by huge construction debts, was unable to earn much revenue in the first year and quickly succumbed to foreclosure. This created a domino effect that led to the collapse of the National Bank of the State of Missouri in 1877, the largest bank failure in United States history at the time. The future of St. Louis suddenly looked grim.

St. Louis had clearly lost this round, but the game wasn't over.