The bridges of St. Louis

As the webmaster of Bridgehunter.com, I'm helping to organize an Historic Bridge Conference in St. Louis later this summer, August 12-15. The event will bring together bridge enthusiasts from across the country to look at the notable bridges in Missouri and to try to find ways to preserve some of the bridges that are faced with demolition. See Bridgehunter.com for details. St. Louis is an excellent site for a bridge conference, as explained in the following blog.

"I have haunted the river every night lately, where I could get a look at the bridge by moonlight. It is indeed a structure of perfection and beauty unsurpassed, and I never tire of it."
-- Walt Whitman, 1879, describing the Eads Bridge

If you were to ask somebody which is the most famous bridge in the United States, they'd probably choose the Golden Gate Bridge on the West Coast or the Brooklyn Bridge on the East Coast.

Fair enough. But what about the Midwest? We here in Missouri have our national landmark in the form of the Eads Bridge of St. Louis. 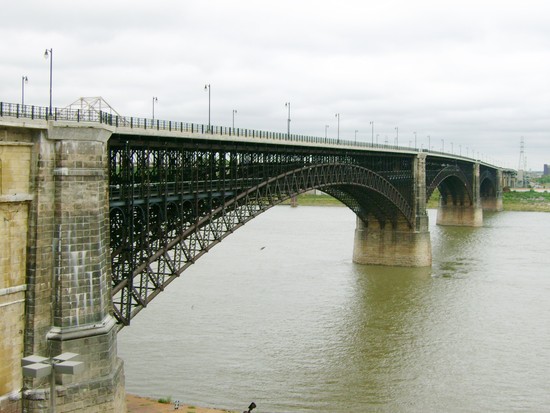 It may not be as graceful as the others, but the Eads Bridge represents a mammoth engineering triumph that, in many ways, puts the Golden Gate or Brooklyn bridges to shame.

Just consider the achievements made by the bridge's chief engineer, James B. Eads:

The bridge has been designated a National Historic Landmark, and for good reason. Dedicated on July 4, 1874, the Eads Bridge is most likely the oldest bridge in Missouri that still carries highway traffic. 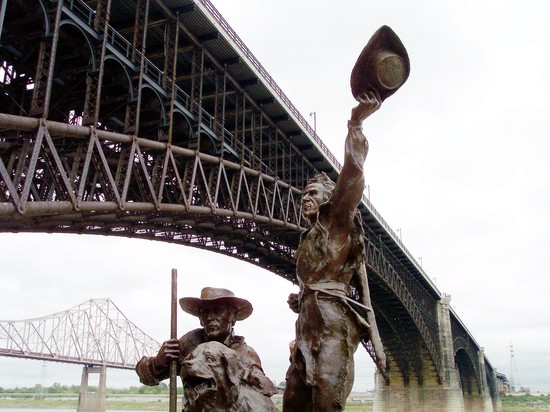 Of course, the Eads Bridge is one of many impressive bridges that have been built around St. Louis. Straddling both the Mississippi and Missouri rivers, the St. Louis area has long presented a challenge to bridge builders. Here is a roundup of the major bridges of St. Louis:

The first major river bridge in the St. Louis area, this railroad bridge over the Missouri River provided access to St. Charles. It lasted until 1936, when it was replaced by a much stronger bridge. The replacement bridge still carries rail traffic.

Fed up by the high tolls charged by the Eads Bridge for rail traffic, a group of St. Louis businessmen spearheaded a project to build their own bridge on the north side of St. Louis. However, after the bridge was completed, they couldn't recoup their costs, and the bridge suffered foreclosure. It was taken over by the Terminal Railroad Association, the same group that had taken control of the Eads Bridge. 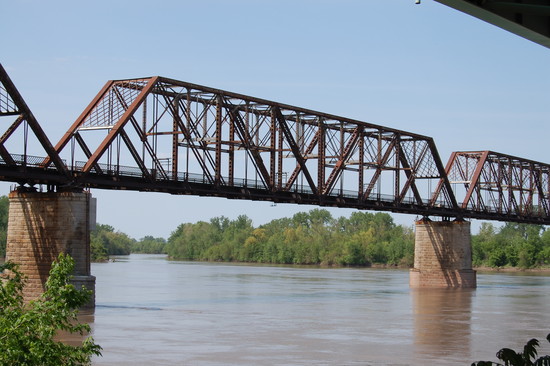 This pair of bridges was built to carry rail traffic directly from Alton, Illinois, to Missouri, bypassing the congestion of downtown St. Louis. The Bellefontaine Bridge still carries rail traffic across the Missouri River next to US 67. However, the Alton Bridge over the Mississippi River was demolished (but not replaced) in 1989. 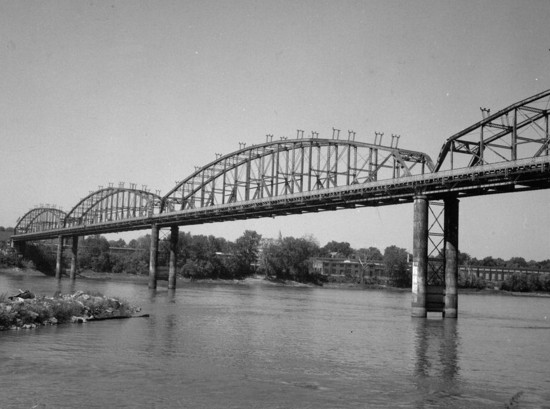 This was the first highway bridge connecting St. Charles and St. Louis counties. Built with a wooden deck, it was prone to fires. In 1992, it was made obsolete by a new bridge on Highway 370. The old bridge was demolished in 1997. 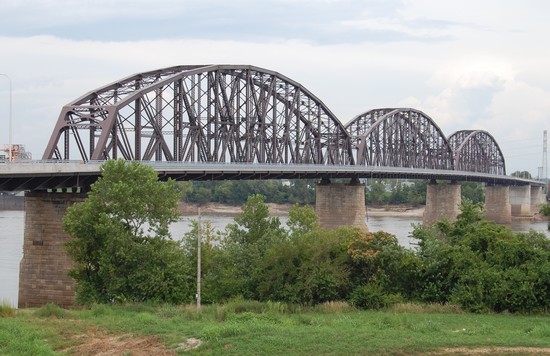 Named for a railroad official (and not the U.S. president), the McKinley Bridge was first built to carry rail traffic to Venice, Illinois, although lanes for cars were added later. In 1958, Venice bought the bridge, operating it as a toll crossing, but traffic dwindled and the city couldn't afford to maintain it. It was condemned and closed to traffic in 2001. After a complicated legal and political battle, Venice relinquished control of the bridge to Illinois and Missouri, and it was rehabilitated in 2007 to carry traffic again -- but without tolls. 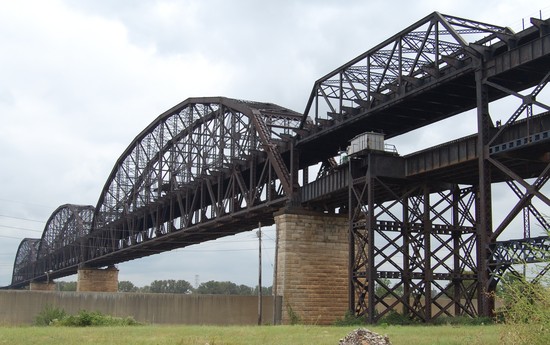 Still frustrated by the high tolls charged by the Eads and other bridges over the Mississippi, the City of St. Louis decided to build a "Free Municipal Bridge." Later renamed for Gen. Douglas MacArthur, the bridge carried rail and highway traffic, although the road deck has since been removed. In 1989, the city sold the bridge to the Terminal Railroad Association in exchange for the Eads Bridge. 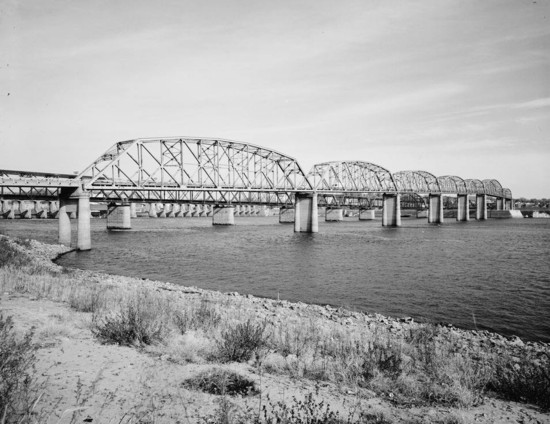 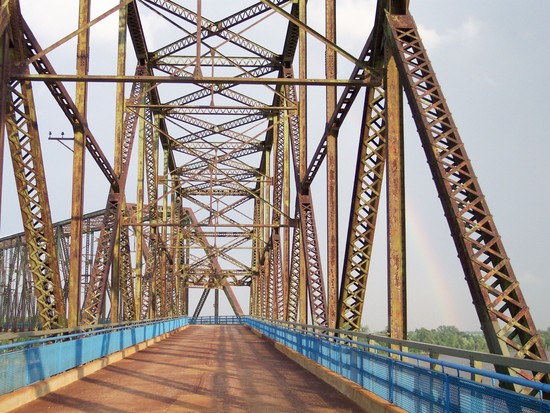 Providing a northern bypass of St. Louis along Route 66, the Chain of Rocks Bridge was famous for its crazy sharp curve right above the middle of the Missisisppi River. Bypassed by a new bridge on I-270, the Chain of Rocks was abandoned from 1968 to 1999, but has reopened for pedestrian and bicycle use. 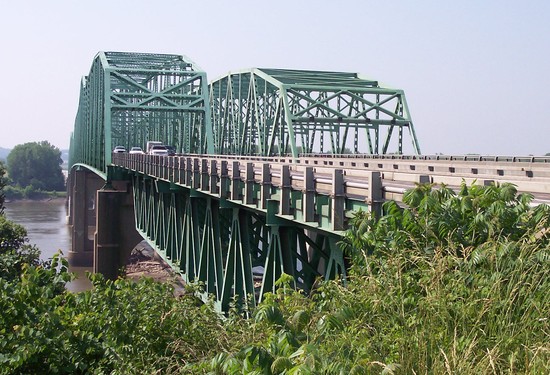 This bridge over the Missouri River at Chesterfield carries I-64/US 40. The oldest of the two spans, built in 1937, is now slated to be replaced by a new span and demolished. 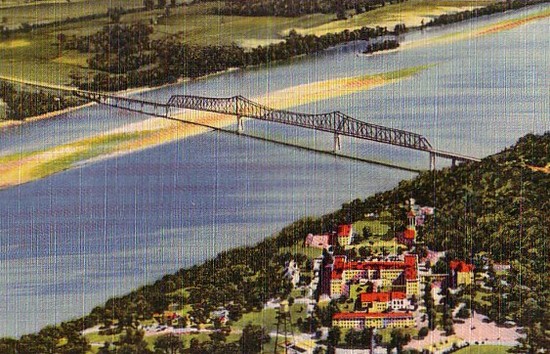 This toll bridge provided a convenient bypass of the St. Louis area on the south. It was replaced by a pair of spans on I-255. 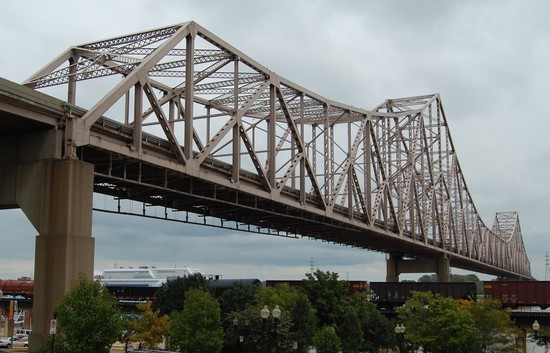 Originally called the Veterans Bridge, this crossing runs parallel to the Eads Bridge at Laclede's Landing. 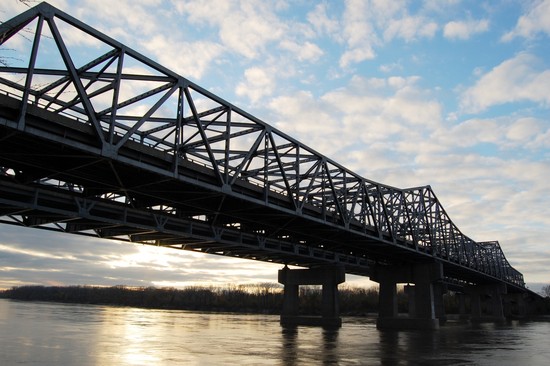 This bridge carries I-70 across the Missouri River at St. Charles. 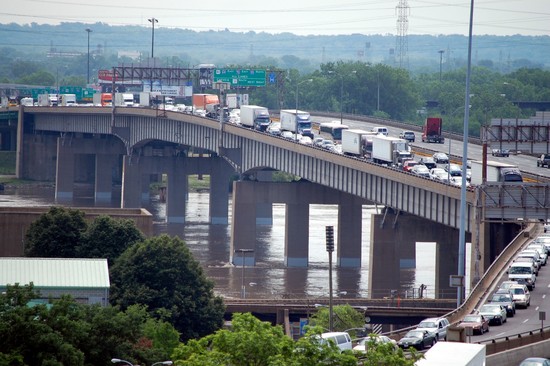 Officially called the "Bernard F. Dickman Bridge" (who?), the Poplar Street Bridge carries three interstate highways (I-55, I-64, and I-70), making it the busiest St. Louis bridge, averaging over 100,000 cars per day. Built from the beginning as a free bridge, it crippled the toll revenues of the other downtown toll bridges (Eads, King, McKinley, and MacArthur) and is a key reason why St. Louis no longer has any toll bridges.