The death trap at Old Appleton will soon be demolished

"The town of Old Appleton is best known for its traffic hazard"
-- Southeast Missourian, 1966

The scene looks so peaceful at first glance: a steel bridge crosses a placid pool of water next to a shaded park. 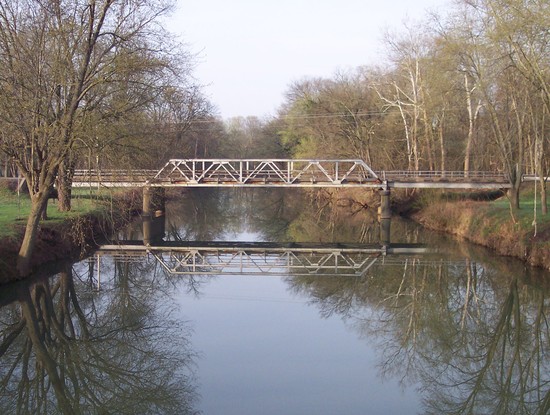 But this isn't always an idyllic scene. Old Appleton is the home to one of the bloodiest stretches of highway in Missouri, a dangerous combination of narrow bridge, sharp curve, and steep hill that has caused a shocking number of deaths and injuries.

During the 1960s, the Southeast Missourian ran a series of stories and editorials arguing that the bridge on Highway 61 over Apple Creek should be replaced as soon as possible. Over 40 years later, it's finally happening. The bridge is slated for replacement starting June 13.

The problem dates back to 1931 when the bridge was designed and built. According to a Southeast Missourian story, a last-minute change was made to the placement of the new highway. The story explained, "This change was made in order to avoid damage to the lawns of two dwellings near the approach to the bridge over Apple Creek. It was then necessary to purchase other right of way, but the relocation represents a savings of approximately $800 to the county."

When the bridge and highway were completed later that year, the end result was a sharp curve at the northern approach that was particularly hazardous to southbound traffic. Did the change in design make the curve worse? It's hard to say for sure, but it probably didn't help. 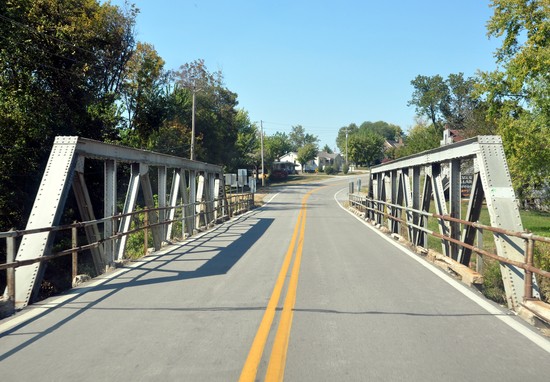 In those days, Highway 61 was routed west through Fredericktown instead of Old Appleton. The road through Old Appleton, Highway 25, was a more direct route, but it wasn't fully paved until around 1937. As a result, most traffic between Cape Girardeau and St. Louis went via Fredericktown, or perhaps through Illinois along Highway 3.

Traffic started to increase in the 1940s, however, and the bridge's engineering flaws were soon exposed. In 1944, the Southeast Missourian reported that a truck loaded with apples crashed into the bridge. In a bit of irony, some of the apples fell into Apple Creek.

By the 1950s, the route of Highway 61 had been shifted east, through Old Appleton, to follow a more direct path to St. Louis. Traffic really started to increase as the highway became a major trucking corridor. The stage was set for a horrifying series of accidents.

In 1962, a tractor-trailer loaded with 30,000 pounds of bacon slammed into the bridge's truss and caused serious damage. It's a wonder the whole thing didn't collapse. 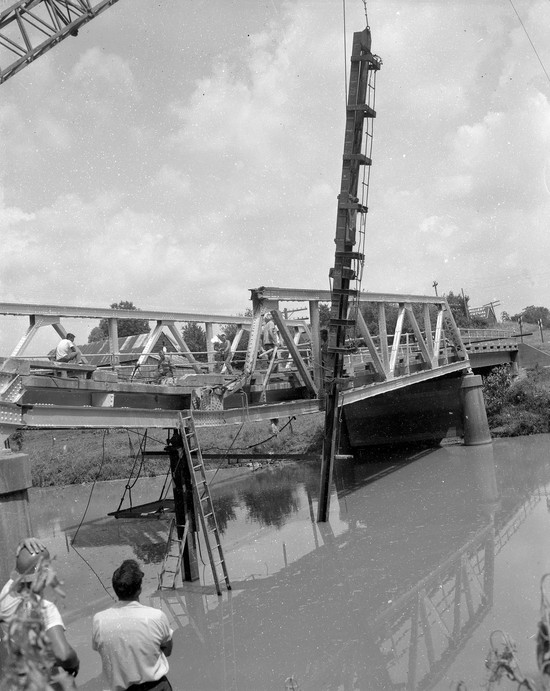 The bridge was damaged again in 1966 thanks to another collision involving a meat truck. A few days after that accident, the newspaper ran a series of front-page stories about the Old Appleton carnage. The first story, under the headline "Hill, Curve, Bridge - Sometimes Tragedy," reported that the bridge had been struck 33 times since it was built, resulting in 7 deaths.

The final story in the series described how the pavement was contributing to the wrecks. The edges of the road had "lipped", or inclined, curbs. This design was popular at one time as engineers believed that the curbs would "nudge" wayward vehicles back into the roadway. In reality, the curbs caused drivers to lose control and tumble off the road. Highway 61 has since been paved over, eliminating the dangerous curb design, although one example can still be seen just south of Cape Girardeau on the road to the Diversion Channel boat ramp. 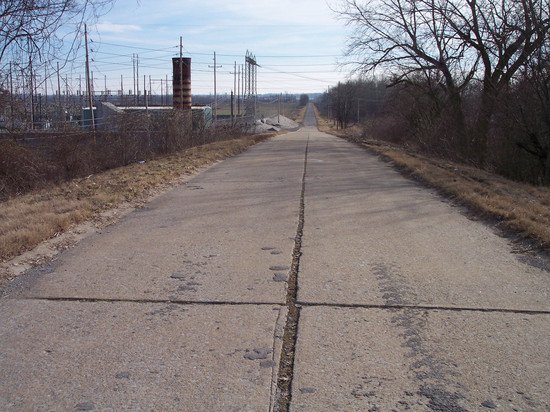 Soon after the newspaper series was published, the highway department installed larger warning signs and flashing lights, plus reduced the speed limit. 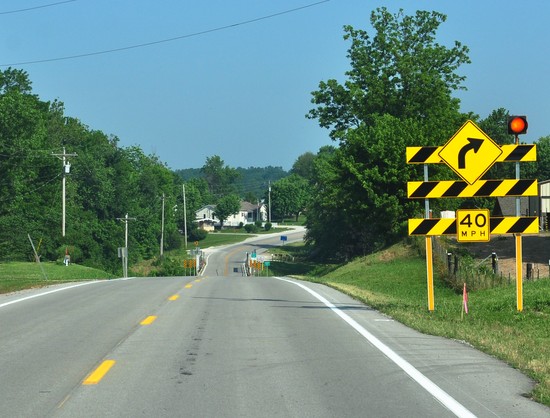 The carnage continued, however, prompting the newspaper to publish an editorial on Feb. 21, 1967, stating grimly, "The Highway 61 bridge at Old Appleton, perhaps the best-known bridge in southeast Missouri, will be approached by thousands of vehicles in 1967. If the averages and trends of previous years hold up, a number of cars and trucks won't make it."

A few weeks later, on April 4, the newspaper published a harsher editorial: "The Missourian was told by a [state highway] commission member there are 'hundreds' of more dangerous non-intersection locations in Missouri. We knew of none to compare and asked for a list of 10 with greater death, injury and accident records. As yet the department has not provided us this information for publication. Until we have the facts and figures we will continue to be skeptical that there is any more dangerous non-intersection location in the state of Missouri."

The editorial concluded, "The fact remains, the Old Appleton bridge is a death and accident trap that has been too long neglected by Missouri and should be remedied. Who will be its next victim?"

Later that year, on Aug. 24, the newspaper turned up the heat after learning that the highway department had received federal grants to fix 279 dangerous spots in Missouri -- but that Old Appleton was not on the list. An editorial stated, "We find it difficult to believe that of 279 safety projects planned under this program that Missouri Highway Commission would not include the death and accident trap at Apple Creek in Old Appleton among them."

The highway department argued that the problem would soon be solved by the completion of Interstate 55. When the interstate was finished, Highway 61 would become obsolete, so it didn't make sense to spend money on a new bridge at Old Appleton.

Meanwhile, the carnage continued through 1970 and 1971. The situation became so dire that the Cape Girardeau Rotary Club installed billboards along the highway to warn of the danger.

Finally, on Aug. 31, 1972, the interstate opened to much fanfare. The newspaper reported, "Twin ribbons of concrete, dedicated here this forenoon, presaged the end to the bloody carnage on parallel Highway 61."

Flipping through the newspaper archives, it's obvious that the accident rate at Old Appleton immediately plummeted. However, the dangerous bridge and curve were still lurking. The bridge claimed another victim in 1983 when a driver from Kentucky lost control of her car and drowned in the creek.

Then, in the 1980s, a new problem emerged. The bridge, battered over the years by collisions, was in poor structural condition. In 1986, the highway department limited the bridge to one-lane traffic to lessen the load, but this experiment was short-lived as a new wave of accidents started occuring. 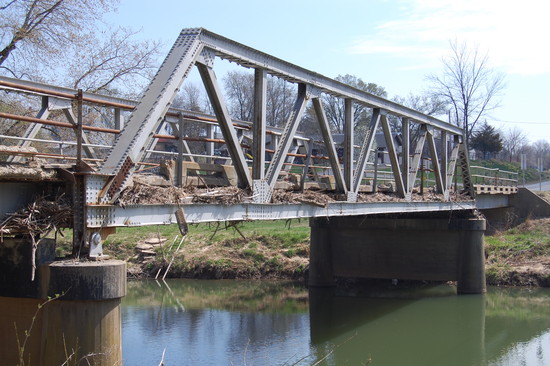 The bridge's trusses and guardrails show many signs of damage.

This year, the structural problems have forced the state highway department to replace the bridge. While I'm usually disappointed when a classic steel bridge is replaced by a boring concrete slab, I doubt anybody will miss the old death trap at Old Appleton.