I was in the middle of a long line of cars that were racing from the Big Muddy River Bridge to reach the Union Pacific steam locomotive's next whistle stop at Wolf Lake.

I had just enough time to park my truck on the side of Highway 3 and run over to the tracks. A nice crowd of Wolf Lakians had already congregated next to the crossing with State Forest Road. 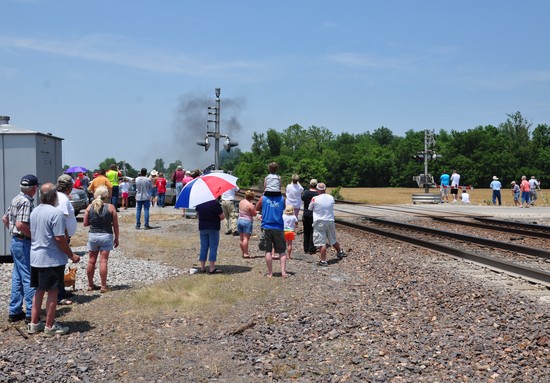 A short time later, the No. 844 arrived with its characteristic roar, making children -- and adults -- cover their ears. 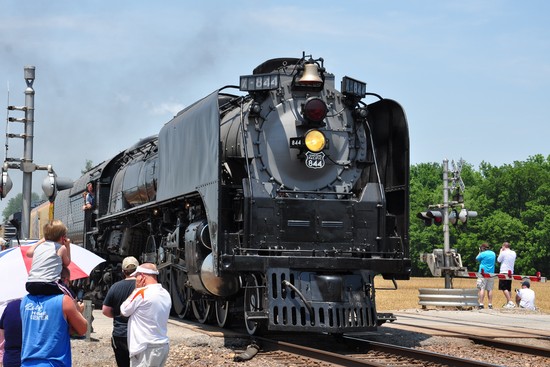 In order to prevent blocking the road crossing, the train continued forward, stopping a fair distance away from where the crowd had gathered. I sprinted over to get some shots before the thundering herd could walk over. 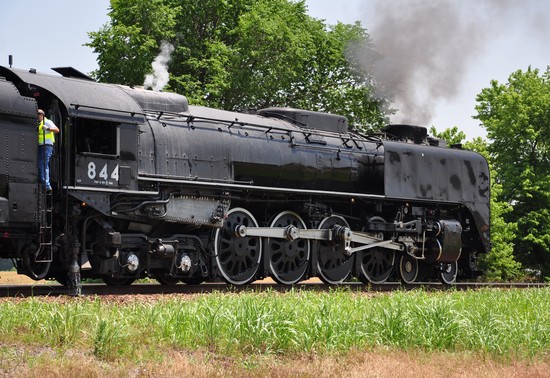 The engineer hopped out to check on the locomotive's absolutely massive drive wheels. 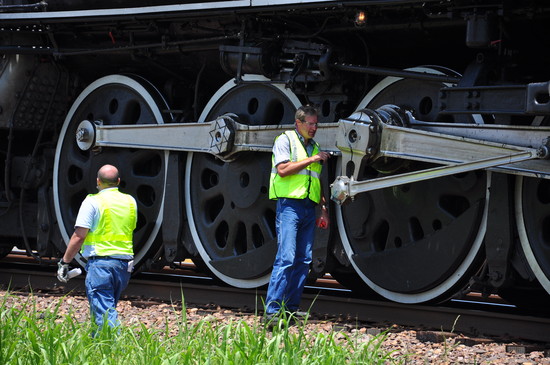 Throughout the day, I was surprised at how close spectactors were allowed to get to the engine, even standing right in front of it. However, the crew starting shooing people away at Wolf Lake as a northbound freight train rapidly approached on the other track. The No. 9473 diesel locomotive barreled through, providing a classic photo opportunity showing the old and the new. 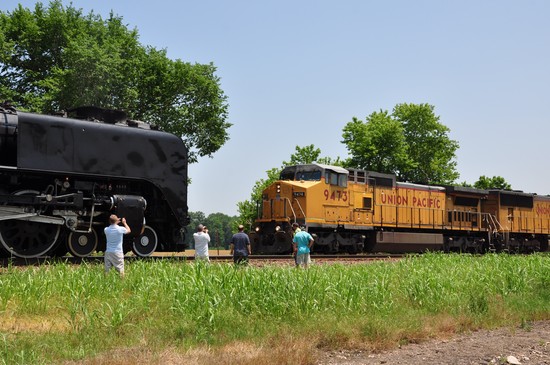 The steam train then started to pull out as spectators waved to the lucky passengers riding in the dome car. 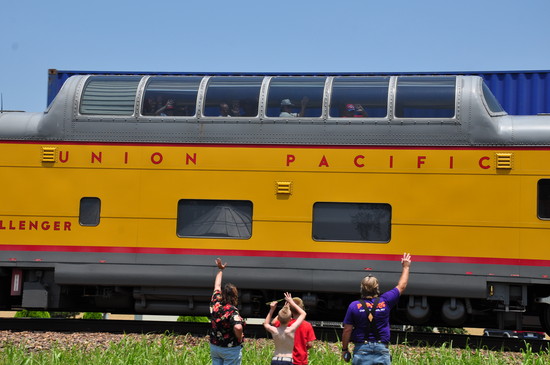 I rushed back to my truck, glad that I had parked it on Highway 3 with an easy getaway route. This was my first day of steam train chasing, but it's clear that there's a lot of strategy involved. With the heavy traffic, however, I knew that I couldn't beat the train to Ware, the next whistle stop. 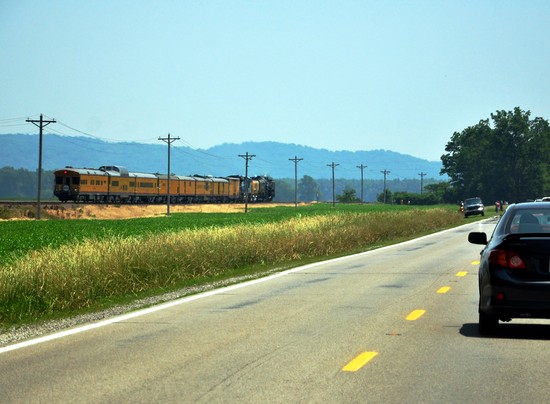 Every crossing and every clear spot along Highway 3 was lined with spectators. At Ware, another large crowd had gathered. It was obvious that I wouldn't have time to park and join them. I could only snap photos driving past. 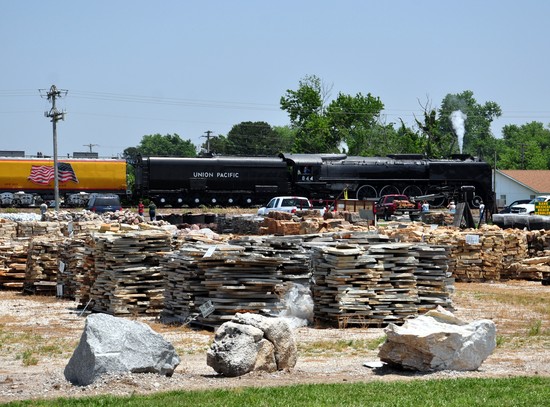 I was able to stop at the former weigh station and wait for the train to pull out of Ware. I was rewarded with the best photo opp of the day. 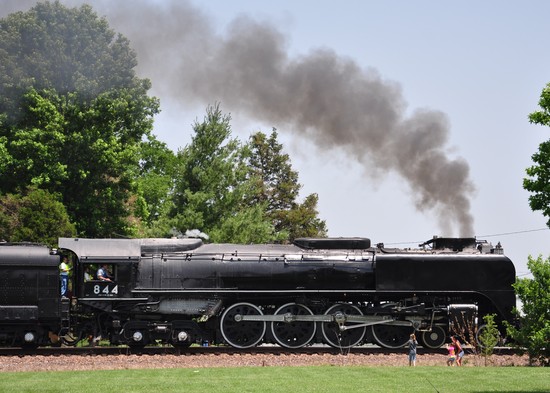 The downside to waiting at Ware, though, was that I knew I wouldn't have time to beat the train to the crossing of the Thebes Bridge. No longer delayed by freight traffic, the steam locomotive accelerated to a remarkable speed as it rolled through Reynoldsville and McClure before disappearing from sight. I had to be content to head to Cape Girardeau and wait for the train's arrival there.

The scene at Cape wasn't nearly as impressive since the train had to run in reverse. A small crowd had gathered under the shade of the Emerson Bridge, but we didn't get to see much as the train stopped short. 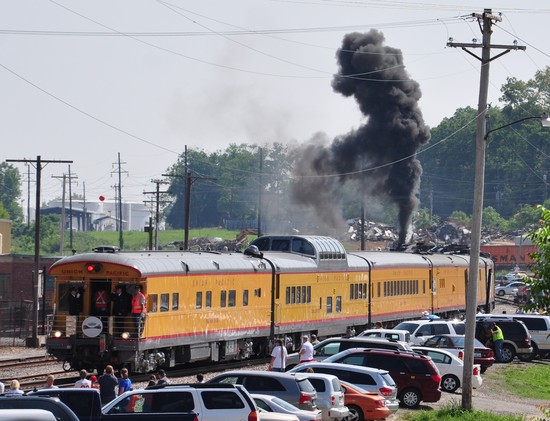 Those spectators who walked down Aquamsi Street in the blazing sun were rewarded with a dramatic sight of the steam locomotive and the Emerson Bridge in the background. 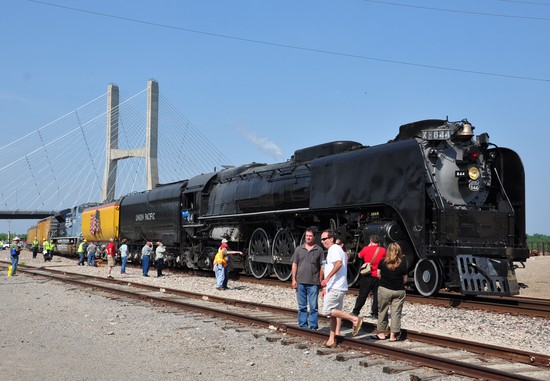 According to the brakeman, the train had stopped short to take on fuel and water. By this time, many of the spectators had visited the souvenir car and were carrying yellow sacks with their purchases. 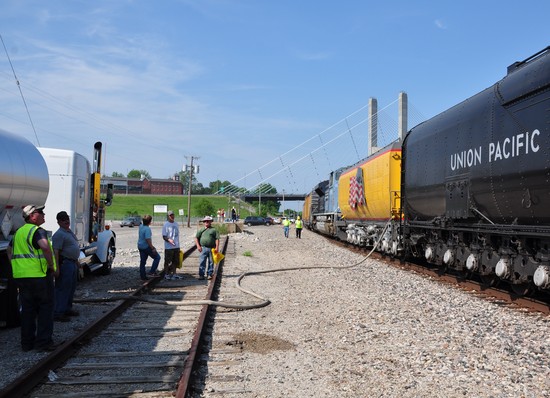 For those folks who only came to see the train arrive at Cape Girardeau, it may have been a disappointment.

Chasing the train through Illinois provided the real excitement: seeing the smoke billow from the engine as it rumbled at top speed through the countryside; jockeying for position against other rail enthusiasts as they studied their DeLorme atlases to find the best photo opportunities; watching the large crowds, young and old, from near and far, gathering to catch a glimpse of a working relic from America's past.