More than you wanted to know about Bird's Point (Part 5)

"It is the biggest emergency peace-time job ever undertaken in one spot by private or engineering outfits."

That's how the Southeast Missourian described the reconstruction of the Bird's Point levee following the Flood of 1937. Soon after the water receded from the January flood, farmers had started moving back into the New Madrid Floodway.

Their return was short lived. The Ohio River had started to rise again by the beginning of May, putting the floodway at risk of a second flood. Some of the mainline levee had been repaired, but a large gap still remained near Wolf Island. Residents in the lower part of the floodway were forced to evacuate again.

The situation looked grim on May 3. To beat the projected crest, a new 4,000 ft. levee would have to be constructed in front of the breached levee. It would need to be completed in 5 days, a task described as "impossible." 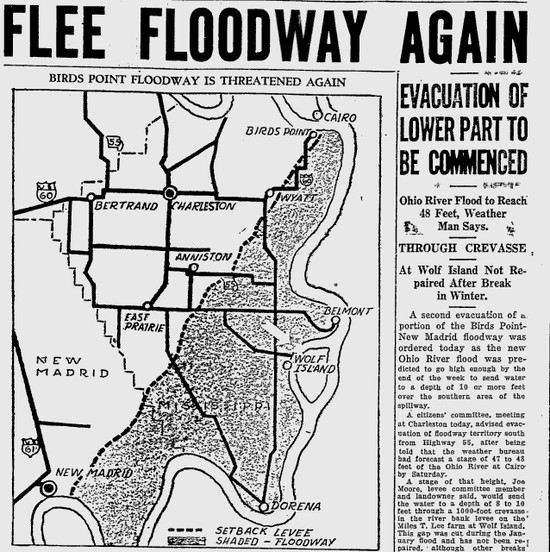 Or maybe it wasn't so impossible. The following day, the newspaper reported that 1,500 workers had been mobilized to fight the river. The U.S. Army Corps of Engineers, Works Progress Administration, and Civilian Conservation Corps worked together to rebuild the levee in a frantic race against time.

On May 5, the newspaper reported on their progress: "The river rose steadily during the night, adding 18 inches to its stage. At midnight a feverish battle was waged by men with shovels and a huge dragline as they fought to throw a levee across a portion of the crevasse where the flood started racing into the spillway."

Three days later, the river had started to crest. The newspaper declared that a "virtual victory" had been achieved against the river.

In a front-page feature on May 10, the Southeast Missourian gave a flowery account of the scene:

Down in the Birds Point floodway, they are making history these days, because one man said: "Give me the men and the money and I'll keep the water out." So, they gave him the men and the money and unless the unforeseen occurs the giant spillway which four months ago echoed to the roar of the flood of the mighty Mississippi will stay as dry as the Sahara in this second surge of the Father of Waters.

What is keeping the water off the thousands of acres of bale-to-the-acre cotton land in the floodway area is what to the uninitiated looks like a rather overgrown swimming pool the banks of which are creepy-like mud and nasty-wet sandbags. Embracing an area of between 80 and 150 acres it would make a swim pool extraordinary, and excellent place for a regatta and a No. 1 spot for an ice skating carnival in mid-winter.

The story added, "There are many amazing remarkable things about this job chief of which is that in the bare space of one week this man-made barrier has been erected to cheat the old Mississippi."

Credit was given to G.A. Robinson, the engineer put in charge of the operation. At first he thought the project only had a 50-50 chance of success, but thanks to the surge of labor provided by government agencies, he had enough manpower to stop the water.

The story noted wryly, "Governmental red tape usually is hard to cut, but somebody must have used a couple of shears."

Coming in the middle of the Great Depression, it wasn't hard to recruit workers with the offer of a paycheck, even for grueling construction work. The government reportedly spent over $200,000 on the work, a hefty sum for 1937.

What does this mean for our current flood situation? Farmers in the New Madrid Floodway are chomping at the bit to replant their crops, but it's entirely possible that the river could deliver another flood. Heavy rain in Montana is already causing problems along the Upper Missouri River. If we were to have a deluge at the same time that this pulse of water reaches Southeast Missouri, we could see another major flood this summer.

So far, the Corps of Engineers is in no hurry to rebuild the Bird's Point levee, only promising that some kind of temporary fix will be in place by next March. If we have another flood crisis, however, the federal government may not be able to drag its feet any longer.

History, after all, does have a strange tendency to repeat itself.