Be careful what you wish for

A large group of spectators were waiting at the Lake Wappapello emergency spillway, hoping to see a show. The U.S. Army Corps of Engineers had installed a temporary line of sandbags, hoping to prevent water from overtopping the spillway and destroying Highway T below it.

Over the course of a weekend, visitors came and went, hoping to witness an historic event. It would be only the second time that the spillway overflowed.

But nothing happened, much to the disappointment of the crowds. They wanted to see some action, but the sandbags held. The lake, swollen by a series of heavy rains, eventually crested and started to fall. 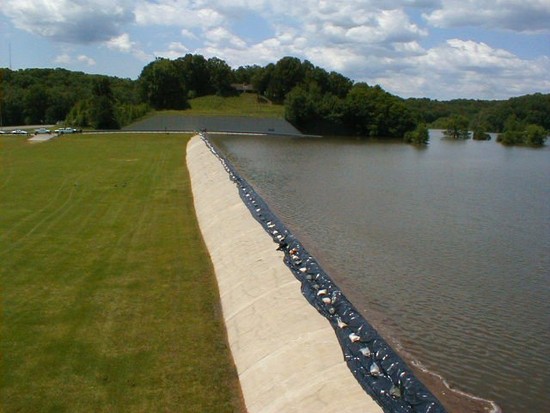 This is May 2011, and things are much different this time. Swollen again by a series of heavy rains, Lake Wappapello could not be held back by a temporary dike. As the lake crested at a new record high, the water put on a show that was so spectacular that the public was not allowed anywhere near the volatile spillway. 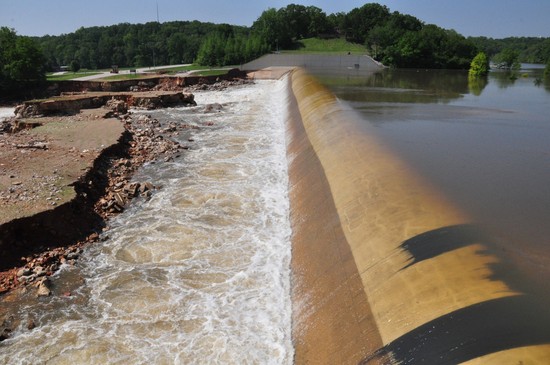 The water crashed over the concrete spillway, quickly scouring a canyon and destroying a large section of Highway T. MoDOT hasn't yet had a chance to erect a "Pavement Ends" sign, but this is the one place where it would be the most appropriate. 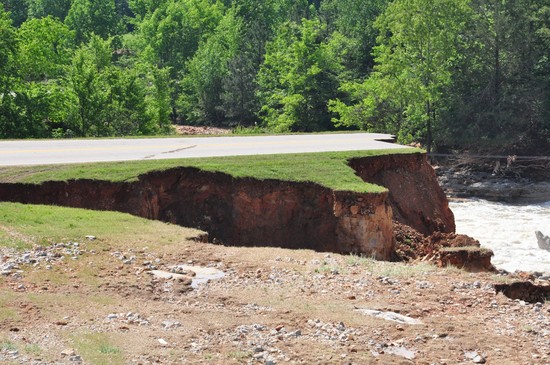 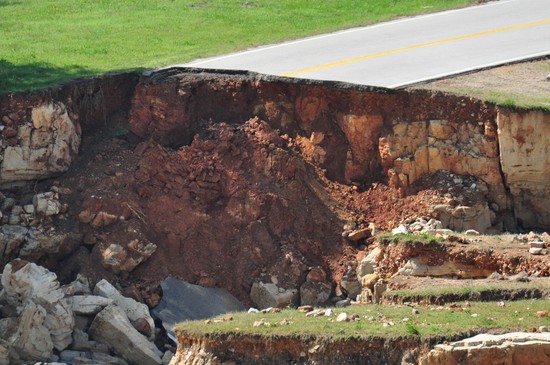 Even a week later, when the public was allowed to visit the site, water was still overflowing the spillway and cascading through a new landscape. 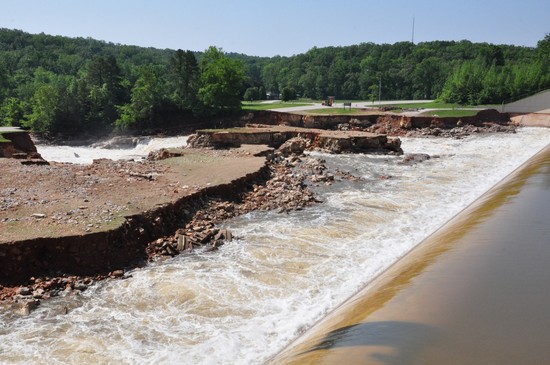 Buses and haywagons brought spectators to the spillway overlook so they could witness the Missouri equivalent of Niagara Falls. 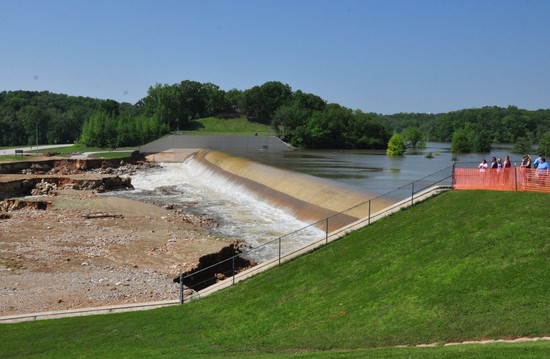 Just like the famous falls on the Canadian border, our version is loud and violent. 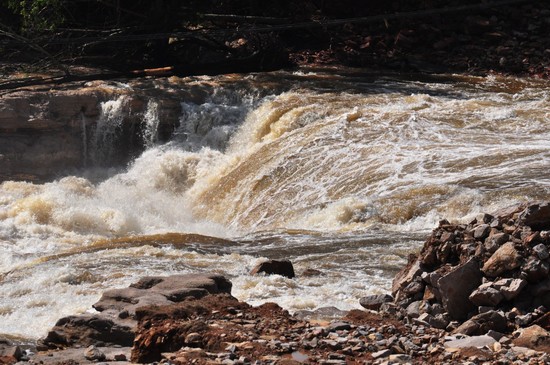 At the crest on March 3, over 30,000 cubic feet per second was draining out of the lake. That's over 220,000 gallons per second, or enough to fill an Olympic-sized swimming pool every 3 seconds. 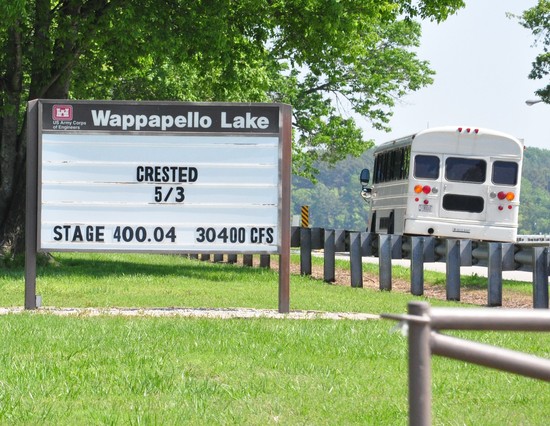 The newly cut channel below the spillway is lined by huge boulders and other debris. Chunks of the asphalt from the highway were tossed around like nothing at all. 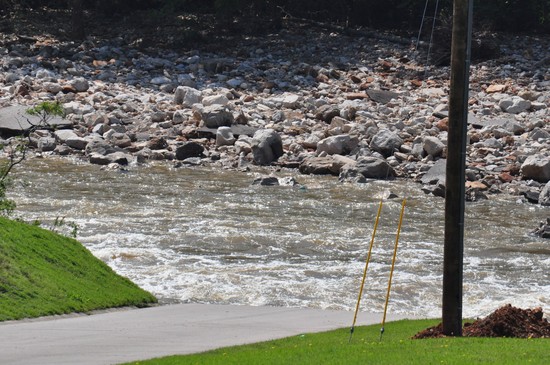 With Route T out of commission indefinitely, the only direct access between Poplar Bluff and Wappapello involves taking a muddy county road that crosses the St. Francis River below the dam. It's not often that you find rush-hour traffic on a gravel road, but that will be the scene for some time. At least the road is open -- it's barely above the level of the flood waters. 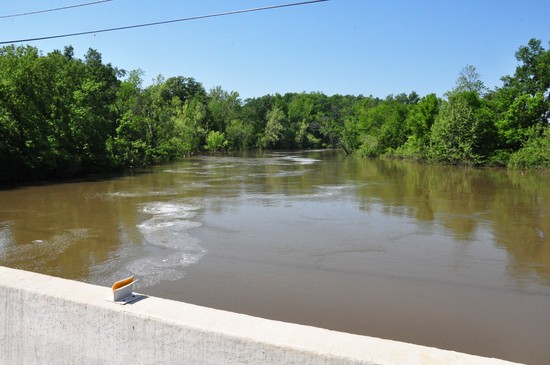 With roads, boat ramps, and campgrounds closed all around the lake, this is going to be a terrible spring and summer for local businesses. Maybe 2002 wasn't such a disappointment after all. 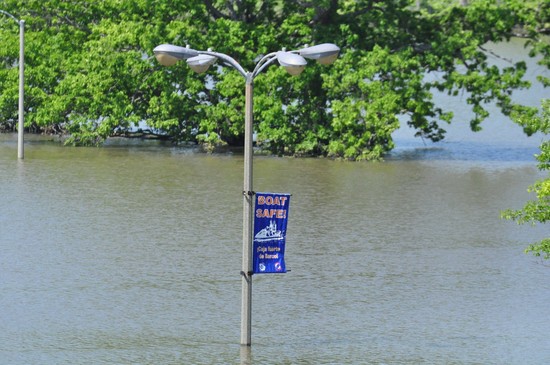 The scene is eerily similar to the aftermath of the Taum Sauk Reservoir breach. In that case, a wall of water cut a scour channel through Johnsons Shut-ins State Park. The park has turned that disaster into a tourist draw by building an interpretive trail through the channel.

Perhaps the Corps of Engineers will be able to do the same thing at Lake Wappapello, retaining a portion of the new canyonlands so that future visitors can experience the record-setting Flood of 2011.