Where the pavement really, really ends 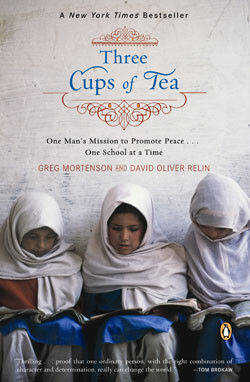 And yet here I am working on a book report, although at least I didn't procrastinate (much). I was asked to lead a discussion on the book Three Cups of Tea: One Man's Mission to Promote Peace... One School at a Time as part of this year's Cape Girardeau City Wide Read.

The discussion is 7 PM on Tuesday, Feb. 22, at the Cape Girardeau Public Library. It's free and open to the public. You don't have to read the book ahead of time.

"Three Cups of Tea" is an account of how one American, Greg Mortenson, spearheaded a campaign to build schools in remote areas of Pakistan and Afghanistan. I'm not quite sure how that relates to this blog, but the sweet voice on the phone asking me to participate said that I was a "local celebrity" and "explorer." Flattery is nice, but let's not get crazy! Exploring trails in Missouri or Illinois isn't quite the same as traveling to Pakistan or Afghanistan. Hiking to the top of Bald Knob is wee bit less challenging than scaling K2.

I was also skeptical about the choice of book. What do schools in Pakistan have to do with Cape Girardeau?

Well, it turns out, more than I thought.

First, the book provides insights into current events in the Islamic world, as protests and revolutions have spread from Tunisia to Egypt and now to a growing list of nations: Bahrain, Libya, Iran, Yemen, Jordan, Morocco, Djibouti, and Algeria. When Greg Mortenson first visited remote Pakistan in 1993, he saw extreme poverty, lack of access to education, and an uncaring, distant government. The situation remains even worse in some of these other counties. Combine the chronic problems with a sudden increase in food prices, and the anti-government protests are the result.

Second, Mortenson's story highlights one of the root causes of terrorism. During the late 1990s, as Mortenson is building his schools, he notices that other competing schools are popping up like mushrooms. But these schools are bankrolled by Saudis and Kuwaitis, and they have a deadly agenda: recruiting students for terrorism.

Mortenson explains, "They're churning out generation and generation of brainwashed students and thinking twenty, forty, even sixty years ahead to a time when their armies of extremism will have the numbers to swarm over Pakistan and the rest of the Islamic world."

We saw what happened on 9/11. It's terrifying to imagine what else could happen to the United States if this trend continues. Mortenson believes that the best approach is to build regular schools that teach a mainstream curriculum, especially for girls. This kind of solid education helps to alleviate poverty while directing young people away from the lure of terrorism.

At least, that's his plan. Mortenson comes across as rather naive, however, and it's doubtful that schools alone are going to be enough. One of the many reviewers of the book on Amazon.com makes this astute observation: "Ultimately, education and opportunity for the people in Afghanistan, Pakistan, and elsewhere will have to come from stable democratic governments in those countries, and not from schools donated or imposed by either well-meaning Americans or Saudi Wahhabists. Otherwise it just becomes a different kind of arms race, with the children used as pawns by both sides."

That's harsh, and not at all what Mortenson intends, but it might be the ugly truth.

Some of the other Amazon.com reviews are quite interesting (I wish we had this tool back when I was writing book reports in school). As of this writing, 2,303 reviews praise the book with 4 or 5 stars, while 113 give it only 1 or 2 stars.

The positive reviewers focus on the story of Mortenson's life, which is clearly amazing. It's a classic tale of a man who beats the odds -- and the odds are very formidable -- and accomplishes his initial goal of building a school in one village. He's not done, though, and so he sets his goals higher and beats the odds again to build more and more schools, with many trials and tribulations on the way.

At the risk of sounding like a cliche, this is definitely an inspiring story with much soul-searching involved. It makes you want to pause and re-consider your own life and how you could contribute more to humanity.

In a tenuous effort to connect the book to this blog, I'd also like to say that I enjoyed the book's description of the mountain terrain and countryside in Pakistan (it sounds beautiful). Out of curiosity, I found that Google Maps has some excellent satellite imagery for Pakistan, even for the most remote areas where the book takes place. The geography lesson is a nice bonus, especially since I would have had trouble finding almost all of these places on a world map, and I doubt I'm alone on this.

Nevertheless, "Three Cups of Tea" has its problems. The negative Amazon reviewers, in particular, criticize the book's structure and writing style. The book's cover is a bit sneaky: it gives top billing to Greg Mortenson as co-author, but the book is almost entirely written by journalist David Oliver Relin. And it shows.

Relin frequently switches from writing in third person to writing in first person (by quoting Mortenson), making the story sound more like a wordy magazine article rather than a compelling biography. It's an odd situation: the story itself is a gripping page-turner, while the writing style makes you want to stop reading entirely in disgust.

In addition, Relin tends to idolize Mortenson while glossing over his flaws. As the author, that's his right, but it's still frustrating. Several times in the story, Mortenson makes dumb mistakes which put himself in serious danger. Relin seizes on these events to create melodrama, but doesn't adequately try to explain what the heck Mortenson was thinking.

Why, for example, did Mortenson venture alone into Waziristan, the most lawless part of Pakistan, letting himself get kidnapped and nearly killed? I don't want to give away too many details of his adventures in case you haven't read the book, but that incident is particularly jarring. (The good news, of course, is that Mortenson was released unharmed and lived to tell about it. But then he almost finds himself in a similar situation later in Afghanistan. Ugh.)

Putting that aside, the book is still well worth reading. It's now required reading, as the book boasts, for certain commanders, officials, and soldiers in the U.S. military. And for good reason: it's a classic. I fear, however, that the book's flaws make it a leading candidate for that old Mark Twain sarcastic gem, "A classic is something everybody wants to have read, but no one wants to read."