May 25, 1905, was an important date in local history, but it's frequently overlooked. This was the grand opening of the Thebes Railroad Bridge, an engineering landmark that is still the only rail bridge between St. Louis and Memphis.

Thanks to a history of railroad bridge disasters in the 1800s, people were somewhat skeptical about the strength of new bridges. When an iron bridge at Ashtabula, Ohio, collapsed in 1876, killing 92 people, these new-fangled iron and steel bridges were greeted with suspicion.

As a result, it was common to stage a "test" of newly constructed bridges to show that they were strong enough. This meant driving a long line of steam locomotives across the bridge at once. If the bridge could handle the weight of the massive locomotives, it could handle anything. 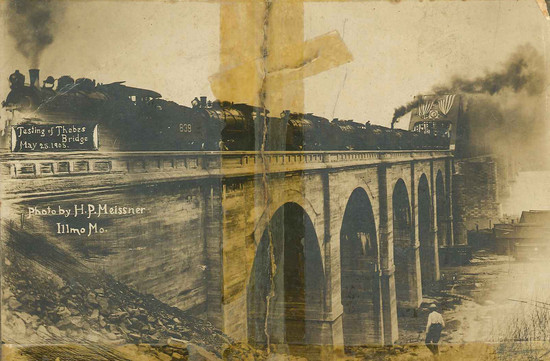 Ken Roussel sent a photo of that crazy event. His grandfather was a fireman in the lead locomotive. The "test" was probably more of a publicity stunt than an actual engineering study (the first train had already crossed on April 18, 1905, without causing the bridge to collapse).

The book, A History of the City of Cairo, Illinois, by John M. Lansden (1910), includes another classic photo from that day. 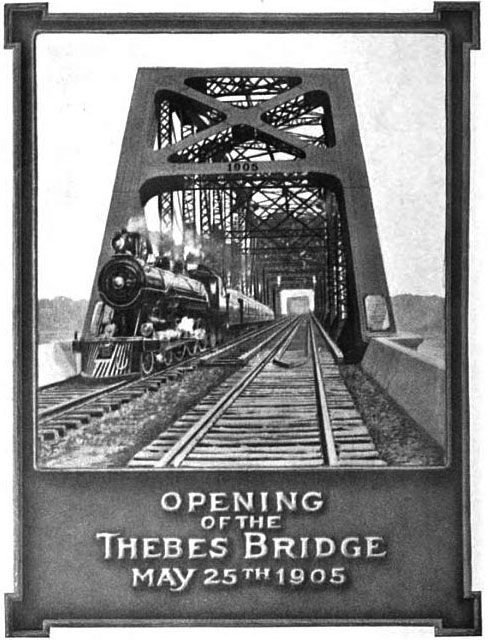 The bridge's construction wasn't just a local affair. It grabbed national attention, including a spread in the July 1905 issue of Popular Mechanics. 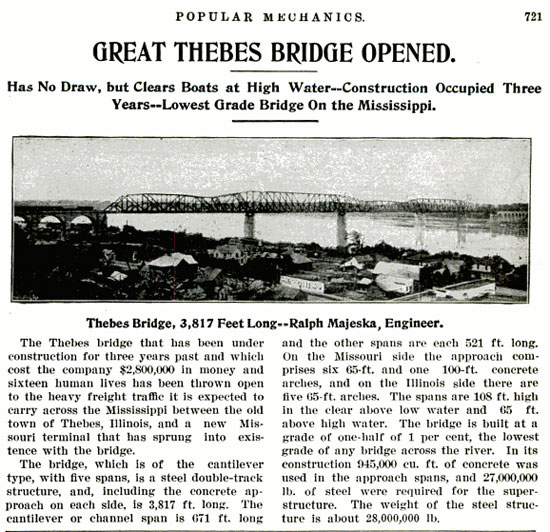 Other publications, including Railway Age, Engineering World, and Railroad Gazette, published features on the new landmark, including copious details on the design and numerous photos. Considering that publishing magazine photos in 1905 was no small task, the publicity for the Thebes Bridge was a big deal.

The designer, Ralph Modjeski, gave a lecture at Cornell University about the bridge's construction. Modjeski would achieve fame as the engineer of several other major American bridges. His consulting firm, Modjeski and Masters, is still in business.

Modjeski's design was unusual in that the "prettiest" part of the bridge was limited to the approaches. The main spans, featuring massive cantilevered trusses, are somewhat bulky in appearance. 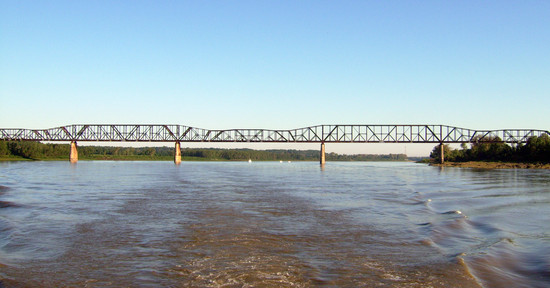 Meanwhile, the ends of the bridge are carried by graceful concrete arches, almost like a Roman aqueduct. 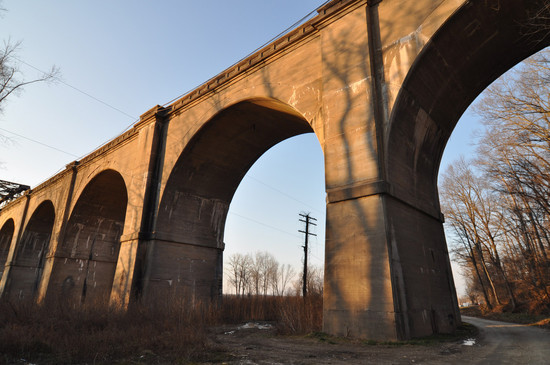 It almost seems like Modjeski felt a little guilty about the design of the main spans and tried to compensate with some beautification for the rest of the bridge. The concrete arches were an innovative design, rarely used in bridge engineering before 1905. In his lecture at Cornell, Modjeski spent most of his time describing the concrete arches, giving five reasons why they were better than a typical steel viaduct: lower maintenance costs, greater capacity, solid roadbed, safety, and more room underneath.

The design was pushing the envelope a bit, but the Thebes Bridge still carries heavy rail traffic over a century later. It's unusual to visit Thebes without hearing the rumble of at least one train crossing the bridge. Now operated by Union Pacific, the bridge is a vital link between Chicago and the Southwest. 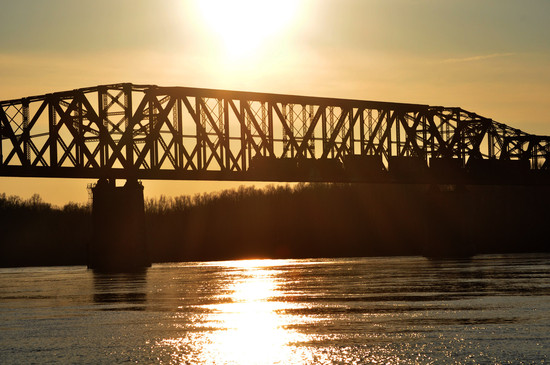 While we'll never get to see the spectacle of dozens of locomotives lined up across the bridge, we do have a chance to see one of the Union Pacific steam locomotives crossing the bridge. It's just a matter of out-voting the people from Chicago so that our "Little Rock Express" route gets the most votes. Let's do what they do: vote early and vote often! The deadline is midnight tonight (Jan. 17).