Why does Cape County have two courthouses?

And why is the county seat in Jackson? 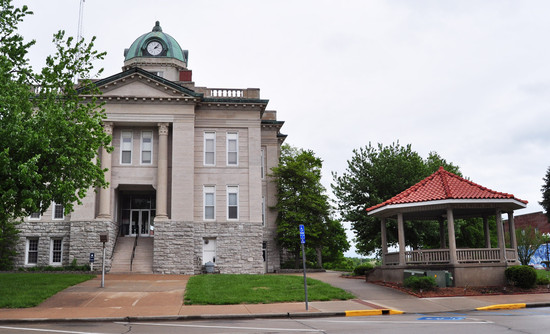 These two simple questions don't really have simple answers. Like many things that involve politics and history, it gets complicated fast.

Our story begins in England, of all places, in the 13th Century. This was the beginning of the Court of Common Pleas, a court that heard cases between commoners, particularly involving real estate. This particular court lost power over the years and was eventually dissolved in the 1800s, but the name survived in the New World as other Courts of Common Pleas were established in various states.

Cape Girardeau County was officially established on Oct. 1, 1812, but by this time the area already had a Court of Common Pleas and a Court of General Quarter Sessions. Both of these dated to a proclamation made Jan. 1, 1805, by Territorial Governor William Henry Harrison.

As explained by Robert Sidney Douglass in his book "History of Southeast Missouri" (1912), "In that proclamation Governor Harrison says that he was not in possession of sufficient information to determine the proper site for a permanent seat of justice but found it necessary to determine a temporary site. Accordingly, he directed that the courts of common pleas and general quarter sessions of the peace and the orphans' court be held at Cape Girardeau upon the lands of Louis Lorimier. The proclamation further appointed the justices of the court of quarter sessions as commissioners to receive proposals and make recommendation concerning the selection of a permanent site."

The commissioners were Louis Lorimier, William Daugherty and Jesse Cain. Even though Jackson didn't exist yet, it was already in the running for the new county seat, as William Daugherty wanted the seat to be located on the "Russell Farm", which he owned, near present-day Jackson. Lorimier, naturally, wanted the seat to be established on his own property, and he offered to donate land and timber for the new courthouse.

Lorimier had the better offer. Cape Girardeau was platted as a new town in 1806 and a crude jail was completed by December of that year. According to Douglass, "It was never satisfactory as a jail, having been very poorly built. The grand jury reported in 1812 that prisoners did not stay in the jail, but simply passed through it."

After Lorimier died June 26, 1812, the tide seemed to turn against Cape. The old Common Pleas and Quarter Sessions courts were abolished, replaced by a circuit court, and a new set of commissioners were appointed to find a permanent seat of justice. This time Jackson, or what would shortly become Jackson, won the vote. The commissioners purchased 50 acres from William H. Ashley on Hubble Creek for the new site. Jackson was then established in 1815, just after Andrew Jackson's victory at the Battle of New Orleans.

Details are fuzzy on the reasons for the commission's decision. The usual explanation is that Lorimier's land grants were on shaky legal footing, although similar objections could have been made about the land grants surrounding Jackson. The truth is probably a combination of factors: Lorimier's death, the problems with building a jail at Cape, and faster population growth at Jackson versus Cape. Or maybe it was just politics?

Despite losing the county seat, Cape had something Jackson didn't: the Mississippi River. The steamboat trade allowed Cape to become the dominant town in the county.

As a result, Cape had enough clout to convince the Missouri legislature to grant the city its own Court of Common Pleas. This court had limited jurisdiction over civil matters, in a nod to the original English court as well as the Court of Common Pleas established by William Henry Harrison. It appears that the court was a matter of convenience, allowing people in Cape to file lawsuits without going all the way to Jackson.

The legislature had established several Courts of Common Pleas throughout the state, but only two remained by the 1970s: the one in Cape Girardeau and one at Hannibal in Marion County. Under a judicial reform bill that went into effect Jan. 2, 1979, both of these court were abolished.

Well, sort of. For reason that aren't entirely clear, but probably involved political maneuvering, Cape Girardeau and Marion counties were each required to maintain two courthouses anyway. In Marion County, the circuit court is divided into two districts, with the main courthouse at Palmyra and a second court at Hannibal. Meanwhile, Cape County has one unified circuit court, but with two locations.

Missouri law includes several statutes that pertain to Cape County's oddball arrangement. Three different sentences make it clear that the county "shall" (must) operate courthouses in both places. It seems that lawmakers were adamant that people in Cape not suffer the inconvenience of driving to Jackson.

While Jackson is the official county seat, for all practical purposes Cape Girardeau is also a county seat. According to Wikipedia, 32 counties across the U.S. have two official county seats. It's a common situation in Arkansas and Mississippi, as some counties were cut in two by a major river, making it hard for people to attend court or pay taxes on the other side of the county. With modern roads and bridges, this isn't much of an issue today, but the old rivalries between towns are still in place, making it a political nightmare to try to consolidate the two seats.

Of course, Jackson and Cape both share a rivalry, too. Would it be a political nightmare to consolidate the courthouses? Under state law, the county seat can be moved by a popular vote. Getting the issue on the ballot isn't easy (it requires a petition signed by one-quarter of county voters), but it could be done, and Cape might have enough votes to snatch the county seat away from Jackson.

So perhaps it's better not to open this can of worms.