True or false? Cape Girardeau is only 60 miles away from the longest natural arch in the eastern United States.

Yes, it's true. According to The Natural Arch and Bridge Society, a rock formation called Mantle Rock in Livingston County, Kentucky, has a clear span of over 150 feet. It's well ahead of the next closest competitor, a 121-foot arch in Alabama. To find anything longer, you would have to go out West. 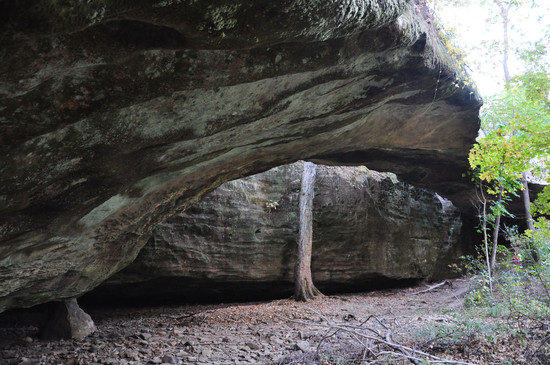 There is a catch, though. Mantle Rock is 60 miles from Cape as the crow flies. Thanks to the inconvenient placement of the Mississippi, Ohio, Tennessee, and Cumberland rivers, the actual drive is more like 115 miles. You have two choices:

1. Cut across Southern Illinois to Paducah. This is known as the "You Can't Get There From Here" system (110-120 miles depending on route).

Despite the hassle, Mantle Rock is well worth the drive. We shouldn't complain too much: the natural arch is located just off the original route of the Trail of Tears. The Cherokees in the 1830s would have been thrilled to have paved roads and river bridges instead of the dirt paths, unreliable ferries, and hostile people they encountered.

Mantle Rock is part of a nature preserve owned by The Nature Conservancy. A new parking area, exhibits, and improved hiking trail were dedicated earlier this year.

From the parking lot, the trail first meets a short segment of the original Trail of Tears route. The depression left from the road is still clearly visible. 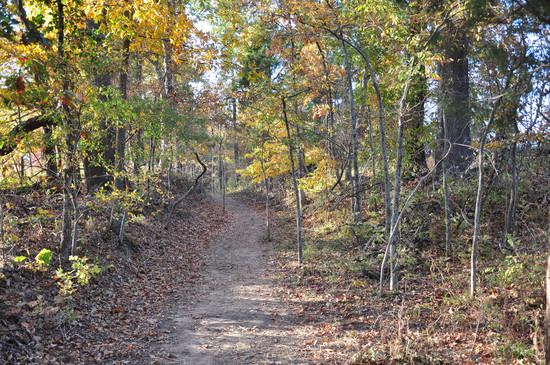 A sign explains that the Cherokee following this route had already traveled 295 miles but still had to go 485 miles before reaching their new "home" in Oklahoma.

The hiking trail turns away from the old road and descends a hill toward Mantle Rock. It's a half-mile from the trailhead to the arch. 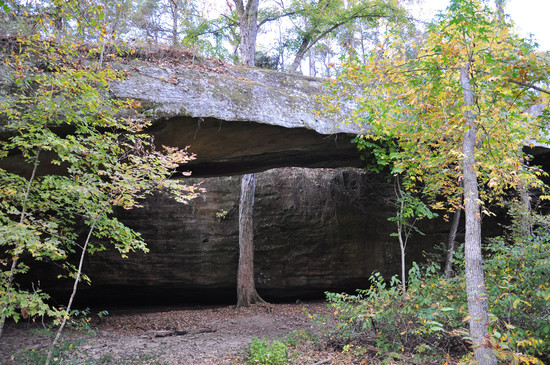 Only a few feet separate the arch from the rest of the sandstone bluff, making it hard to photograph. A tree growing between the two, however, leaves no doubt that this is a bona fide natural arch. 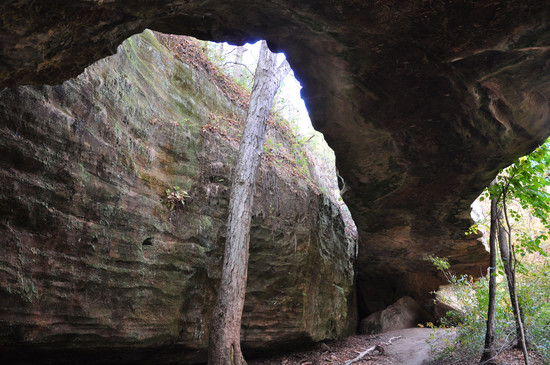 The arch isn't the only interesting rock formation. Walking along the bluff line in both directions, I found plenty of nooks, crannies, balanced rocks, shelters, and squeezes. 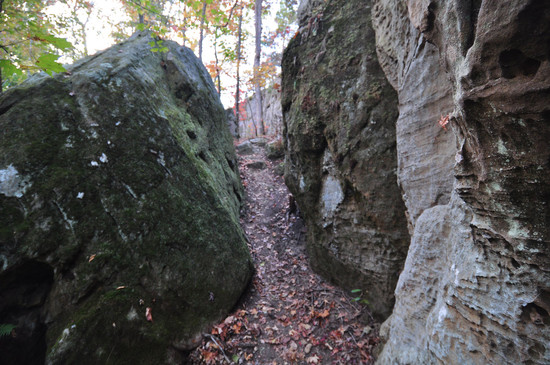 The rock formations are very similar to those found in Southern Illinois. This makes sense: the area is only a few miles from the state line -- as the crow flies.

This isn't the shortest or fastest route, but it's the least complicated, relatively speaking:

From Cape Girardeau, cross into Illinois and take Highway 146 east through McClure, Ware, Anna, and Vienna. At the interchange with I-24, turn right to take the interstate south. Cross into Kentucky and drive around Paducah to Exit 11 for Husband Road. Turn left and follow the road three miles to the intersection with US 60/62. Turn right and go two miles. Take the left exit for US 60 to Smithland. You should start seeing signs for Mantle Rock at this point.

Follow US 60 east for 21 miles to the tiny town of Burna and turn left on KY 135. Go north 8 miles and make a sharp left at the T-junction with KY 133. Look for the Mantle Rock entrance and parking lot on the left after 2 miles.