Two lakes for the price of one

In this part of the country, it's not very often that you can stand within shouting distance of two different lakes. That's the case near Alto Pass, Illinois, where Cedar Lake and its sister, Little Cedar Lake, come within a few yards of each other. 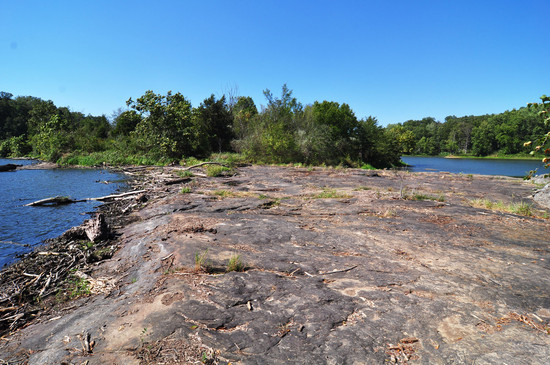 The lakes are separated by a grassy causeway and a thin shelf of rock which serve as a dam and spillway for Little Cedar Lake. Most maps show the two lakes as one, but they are indeed separate: Little Cedar Lake has a slightly higher water level than the main Cedar Lake.

When I visited during dry weather, the spillway rocks were bare. It would be interesting to visit after a heavy rain to see how much water actually spills over the spillway. 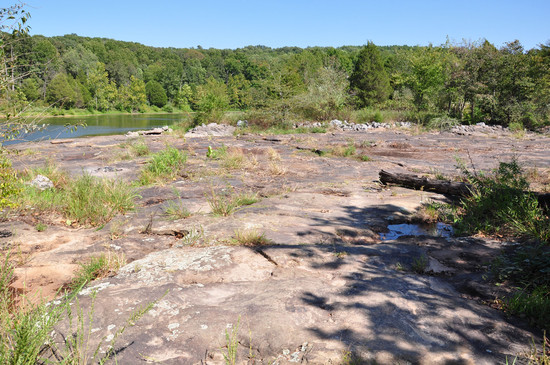 The whole scene looks so natural and serene, but it's a sham. Both lakes, along with the causeway, were constructed in the early 1970s to provide drinking water reservoirs for the city of Carbondale.

A loop trail wraps around Little Cedar Lake providing views of the lake from different angles. 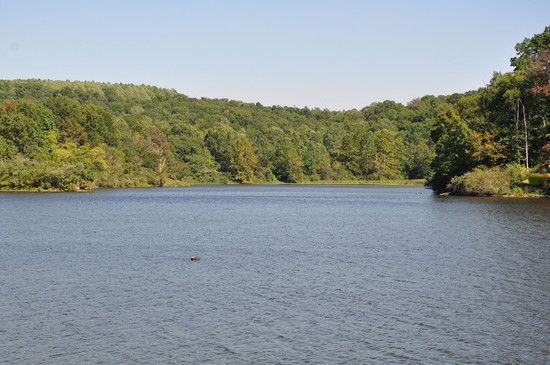 Rock formations are scattered along the trail, but they aren't nearly as impressive as the bluffs, rock shelters, and boulders seen along the Cove Hollow Trail to the north. 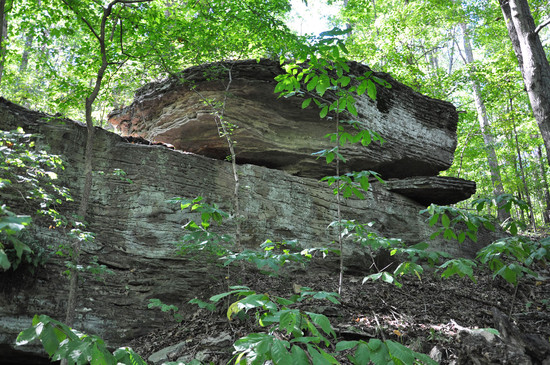 The loop trail, climbing up and down around the tributaries of the lake, is a fairly difficult 3.2 mile hike. Meanwhile, the main trail to the causeway, part of an old access road, is an easy 0.7 mile walk.

Unfortunately, the road to the nearest trailhead is anything but easy. Loaded with deep ruts, mudholes, and low-hanging tree branches, the road is a challenging drive even in a high-clearance vehicle. It's definitely an example of Pavement Ends.

As an alternative, you can either park at the beginning of the dirt road (adding an extra 1.6 mile roundtrip hike) or park at one of the other trailheads around Cedar Lake (adding several miles to the hike). Pick your poison.

[View and print the trail map]

From Cape Girardeau, cross the bridge into Illinois and follow Highway 146 east through McClure and Ware. Turn left on Highway 127 and continue north through Alto Pass. After passing Rendleman Orchard, but before reaching Von Jakob Vineyard, turn right on Landreth Road (the road is clearly marked).

Go about a quarter mile and follow the gravel road as it veers left in front of a house. Continue just over a third of a mile to where the road forks at a gate. Take the right fork into the woods.

You can decide whether to park here (don't block the road or the private gate) or to continue along Landreth Road as it quickly turns into a quagmire. If you do continue along the road, there's no place to turn around if you change your mind.

At the end of the road, take the unmarked trail on the right to reach the causeway and the loop trail around Little Cedar Lake. The trail on the left follows Cedar Lake and eventually connects to the Cove Hollow Trail.