Earlier this year, I wrote about Giant City State Park, famous for rock formations that resemble streets and buildings from a giant-sized city.

The town of Alto Pass, Illinois, has its own small park featuring giant-sized rock formations. The rocks are just as impressive as Giant City, but on a smaller scale. Perhaps instead of a city, these rocks could be called the "Giant Village." 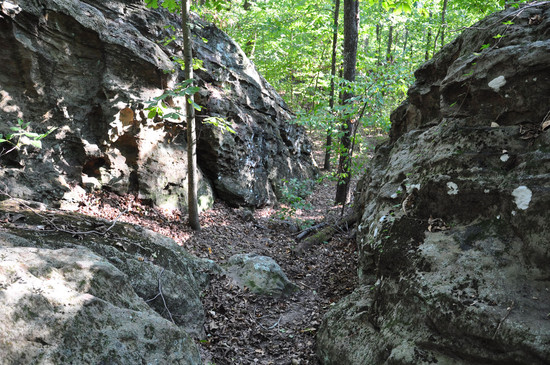 Located right in the middle of Alto Pass, the Quetil Trail provides access to the rocks. It's a very short hike -- barely the length of two football fields -- from the trailhead. 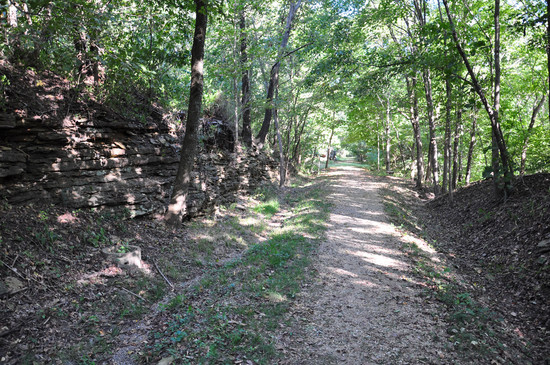 The first part of the "village", to the left of the trail, is a hidden rectangular room connected to the outside world through two narrow cracks. 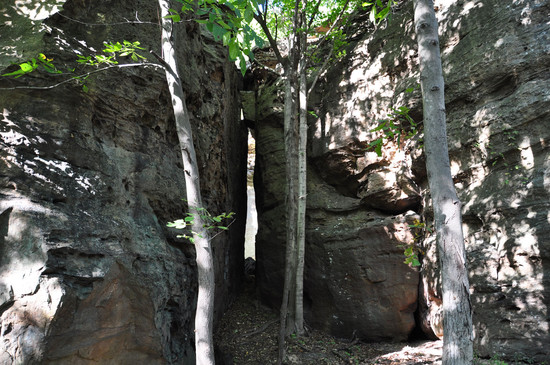 Above the room is a precariously balanced rock. 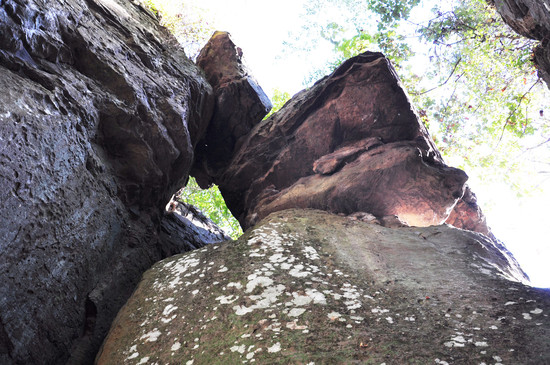 Just down the trail and off to the right, a herd of elephant-sized rocks are scattered along the hillside, tilted in various directions. The scene could easily be described as "Elephant Rocks" if the name wasn't already taken. 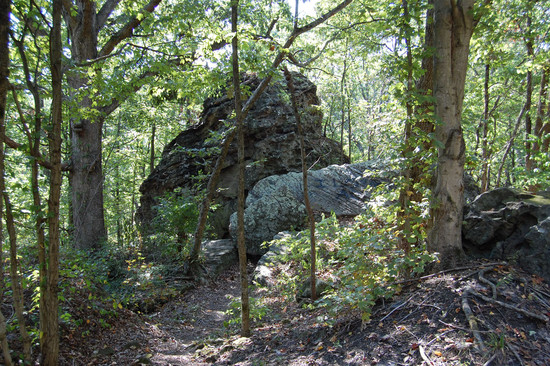 Meanwhile, a tall cliff rises above the trail on the left. A stump marks the location of a stone staircase leading to the top. It's a steep, uneven, narrow climb carved right into the cliff. 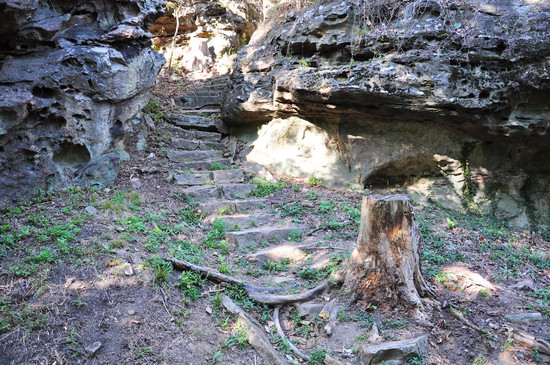 The climb to the top isn't so bad. The trip down, however, is a different story, especially after you see the "USE AT YOUR OWN RISK" sign at the top. Of course, a warning sign isn't going to stop anybody -- it just makes people more bold. 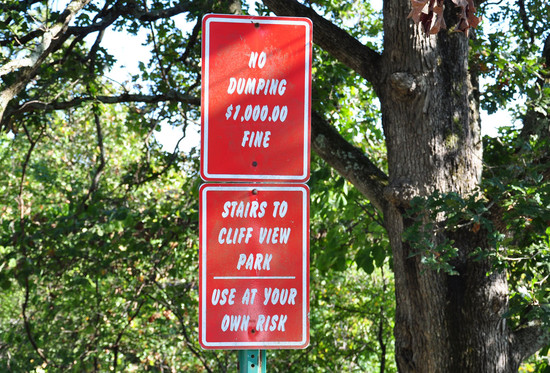 It's obvious that the staircase was built decades ago, perhaps as a Depression-era project. Nobody would attempt to build something so rickety in today's lawsuit-happy, hyper-paranoid, won't-somebody-think-of-the-children culture. 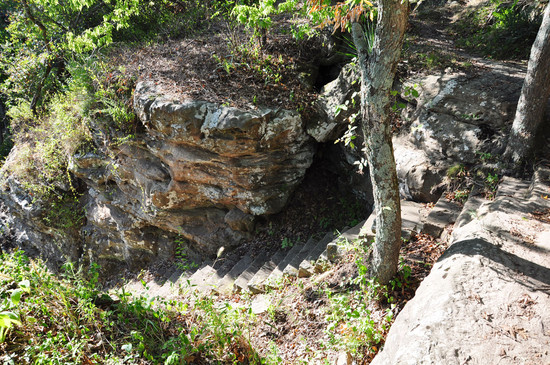 Near the top, the staircase passes next to a large crack in the rock. It's not quite wide enough to quality as a natural arch, but it is possible to walk across the top. 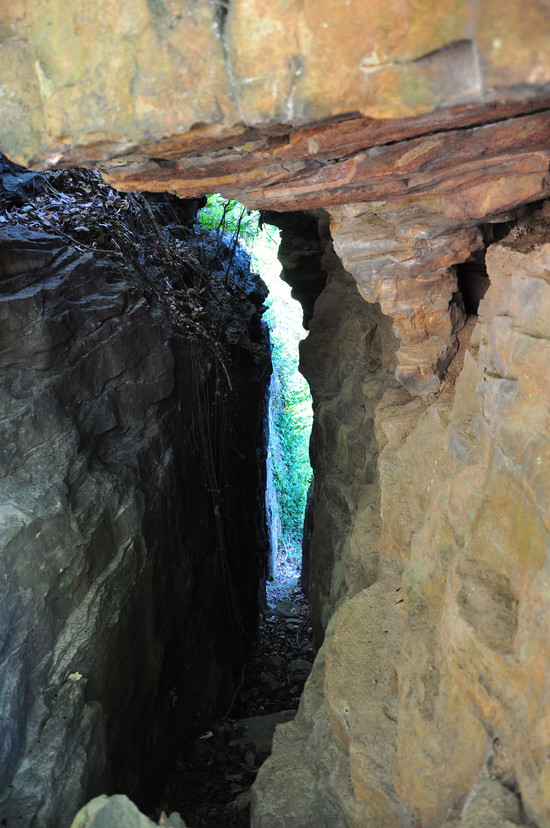 The staircase emerges at a roadside park along the top of the bluff. From here, an overlook provides a stunning view of Bald Knob Cross. 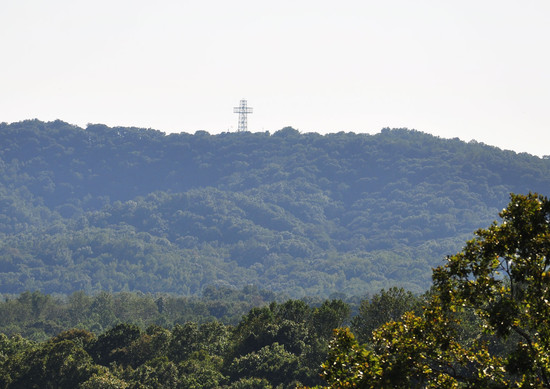 Several ridges can be seen to the south, one after another. 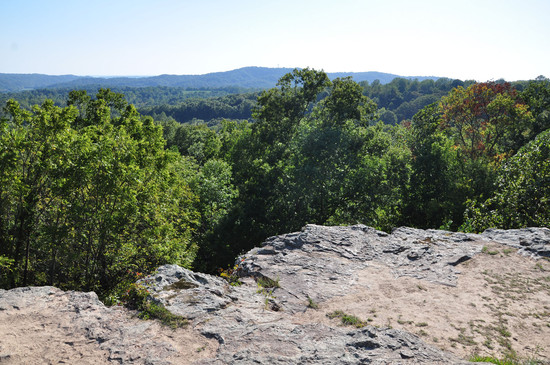 After carefully descending the staircase, the Quetil Trail continues a short distance to the east before ending at private property. 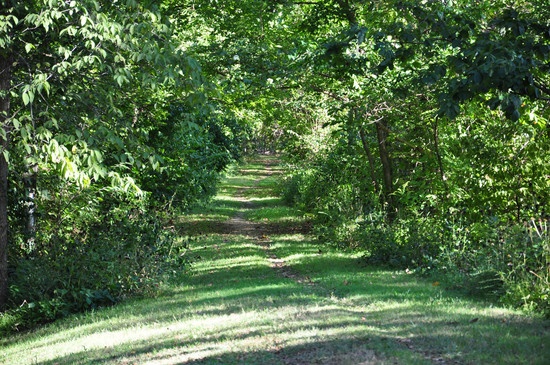 This was the route of the Cairo & St. Louis Railroad, one of the longest narrow-guage railroads in the world when it was built in 1875. While most of the railroad grade was returned to private owners when the line was dismantled in the early 1980s, two other stretches can still be hiked as part of the Shawnee National Forest. (See my earlier blogs about Cave Creek and Kaolin.)

According to a sign along the trail, Also Pass was originally called Quetil Gap after Charles J. Quetil. When the railroad arrived, the name was changed to something more cosmopolitan: Alto means "high" in Latin, a reference to the town's position as the highest pass along the railroad.

With secret rooms, elephant rocks, panoramic views and a crazy staircase, Alto Pass and the Quetil Trail provide plenty of scenery only a short walk from the trailhead.

From Cape Girardeau, cross the bridge into Illinois and follow Highway 146 east through McClure and Ware. Turn left on Highway 127 and go north 8 miles to Alto Pass. At the overpass, turn right and then make a left at the top of the ramp. This street, Chestnut Street, continues to the center of Alto Pass. The trailhead is on the right just before the intersection with Main Street.