Where the river drives a thousand mapmakers crazy

"The Mississippi River will always have its own way; no engineering skill can persuade it to do otherwise..."
-- Mark Twain

During the 1993 flood, the Mississippi River came very close to cutting a new channel near Miller City, Illinois, a shortcut that would have drastically altered the map. In the days before levees and floodwalls, these changes in the river's course were frequent, much to the consternation of mapmakers. Even today we can't completely tame the river.

In Life on the Mississippi, Mark Twain noted how much the river had changed, taking shortcuts to create a new course. Based on the rate of change, he joked that in 742 years, the Lower Mississippi "will be only a mile and three-quarters long, and Cairo and New Orleans will have joined their streets together..."

While it seems natural for the border between Missouri and Illinois to follow the river, this has created somewhat awkward situations. The boundary is permanent, but the river is not. Thanks to sudden changes in the river's course following major floods, an event called an avulsion, the state boundary is sometimes miles away from the actual river channel.

The most well-known avulsion was at Kaskaskia Island, where a sizable chunk of Illinois now sits on the Missouri side. Kaskaskia isn't the only such oddity, though. It's possible to walk across the Missouri-Illinois state line in several places without crossing a bridge, riding a boat, or getting your feet wet. Here is a list of these places, from north to south:

Ste. Genevieve-Modoc Ferry Landing: The ferry crossing north of Ste. Genevieve joins Missouri and Illinois, but only barely. The land immediately north of the ferry landing on the Illinois bank is actually part of Missouri. 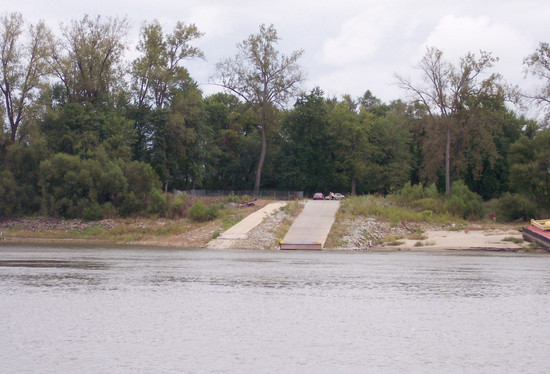 Missouri is on the left, Illinois on the right.

Kaskaskia Island: The town of St. Mary was originally a river port called St. Mary's Landing. After a flood in the 1880s, the river shifted a few miles to the east at the opposite side of Kaskaskia Island, leaving St. Mary without any riverfront property (except during 1993). A bridge at St. Mary crosses the old channel, providing the main entrance to this isolated portion of Randolph County, Illinois. 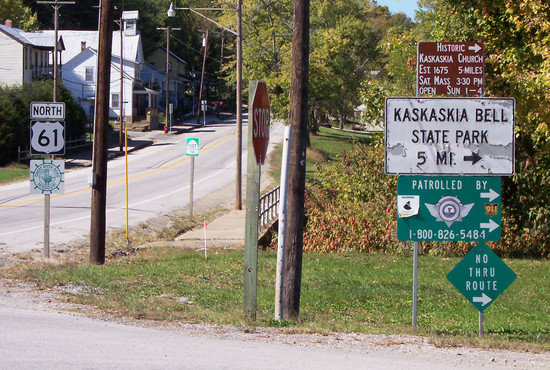 This is the signage along US 61 at the entrance to Kaskaskia Island in St. Mary.

The island does have a second entrance along Cottonwoods Road, a gravel road connecting US 61 with the village of Kaskaskia. The road doesn't cross any bridges -- the old river channel is long gone -- so there's no indication when driving across the state line. 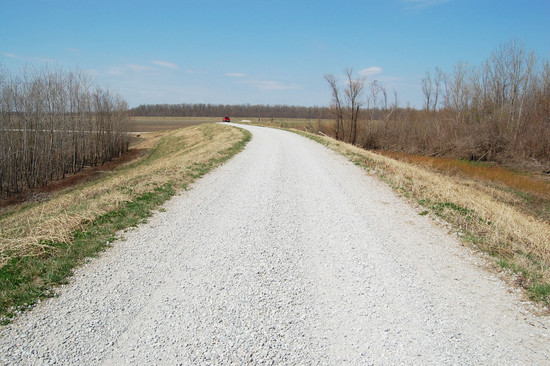 Illinois in the foreground, Missouri is in the background. Don't ask me where the actual boundary lies.

Crains Island: This sliver of land south of Chester is on the Missouri side of the river and is protected by a Missouri levee. But it's legally in Illinois. 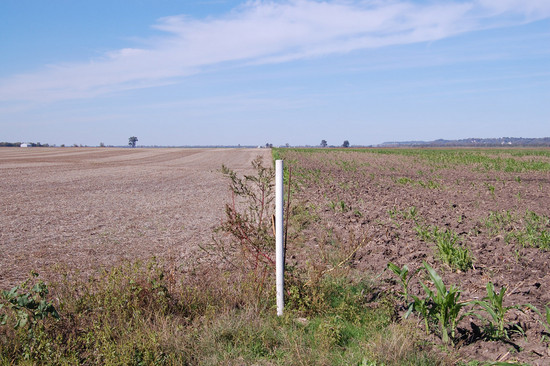 It's hard to tell from my maps, but this post apparently marks the state line in the middle of a field.

The boundary at Crains Island is quite complicated, shown as "Indefinite" on topographic maps. 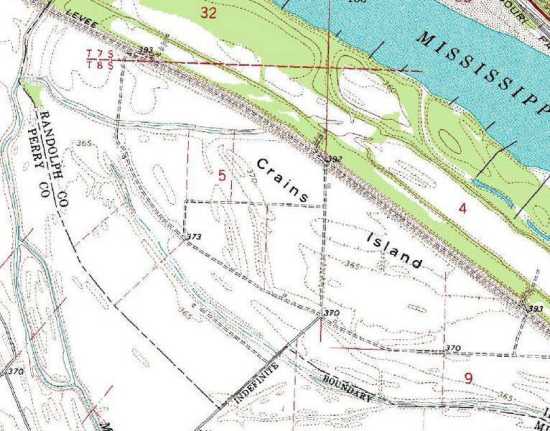 Wilkinson Island: If you were to launch a boat from Seventy-Six Conservation Area in Perry County, go straight across the river, and dock on the other side, you would technically still be in Missouri. The island was presumably named for John Wilkinson, the founder of the ghost town of Seventy-Six and the only person who could possibly explain how Seventy-Six got its strange name. 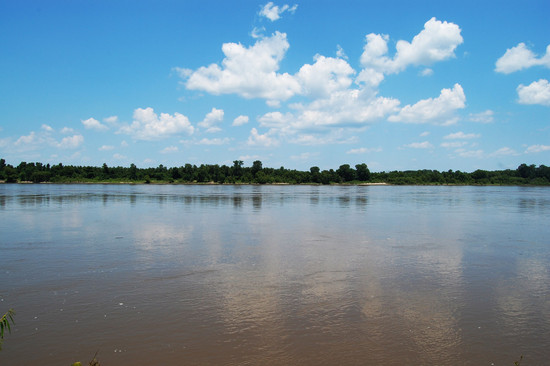 The view from the boat ramp at Seventy-Six, looking from Missouri... into Missouri.

Grand Tower Island: This former island south of Grand Tower, Illinois, is the largest chunk of Missouri territory on the Illinois side of the river. Driving south from Grand Tower along Levee Road, you go from Illinois to Missouri and back to Illinois without passing a single sign or marker. 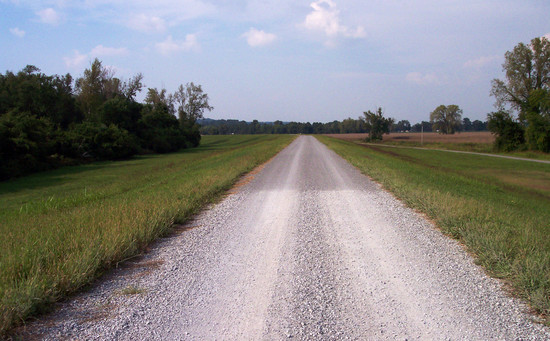 Looking north along Levee Road from Missouri into Illinois. It appears that the end of the pavement marks the state line.

The old river channel is now a U-shaped lake called Tower Island Chute. It still looks like a river, but is cut off from the modern river channel by a levee. 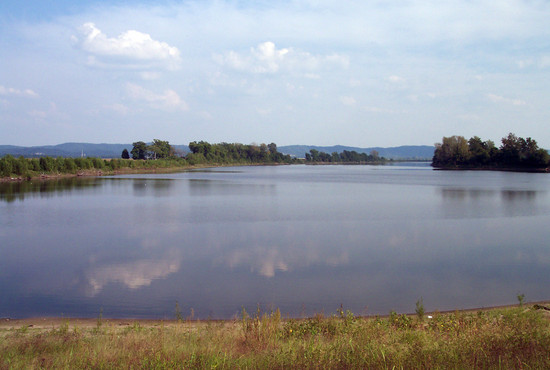 Marquette Island: This sand bar just south of downtown Cape Girardeau, connected to the Illinois shore when the river is low, is actually part of Missouri. The Missouri Department of Conservation has expressed interest in aquiring the 835-acre island.

Missouri Sister Island: The name is an oxymoron: it's not an island, and it's not in Missouri. Sitting inside a sweeping 'S' bend of the river northwest of Cairo, this piece of Illinois has found itself on the Missouri side. Thanks to the crazy geography, the river actually flows to the northwest here -- and Missouri is east of Illinois. Yes, it's all rather confusing. 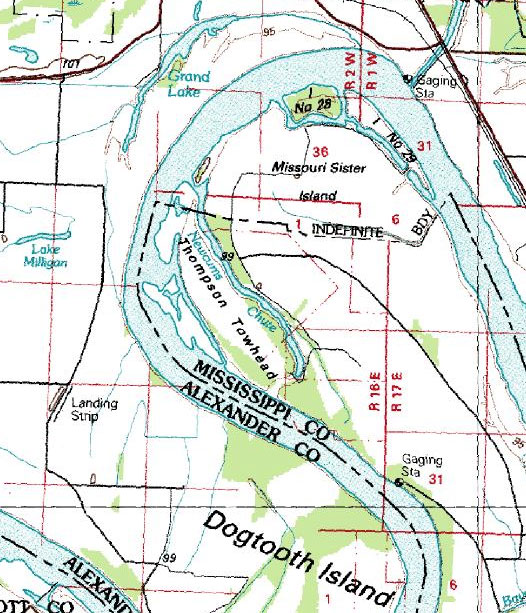