Cape Girardeau has many photogenic landmarks: Cape Rock Park, the Emerson Bridge, floodwall murals, Old St. Vincent's Church, and more. But, in my mind, the number one photo opportunity is the view of Common Pleas Courthouse from the riverfront, looking up Themis Street and the courthouse steps. 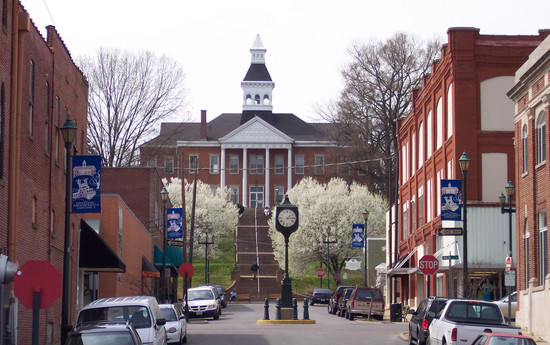 I can't imagine downtown Cape without the courthouse perched high above, but that came very close to happening when the landmark was threatened with demolition in the 1940s and 1950s. After two decades of lawsuits and political wrangling, the courthouse was saved from the wrecking ball. Barely. 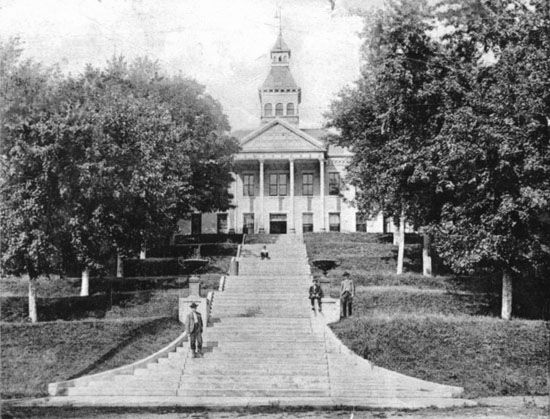 Postcard of the courthouse steps from ca. 1907

The mess started in 1940 when the city made an agreement with the federal government to trade Common Pleas Courthouse (and park grounds) for the old post office building at the corner of Broadway and Fountain. 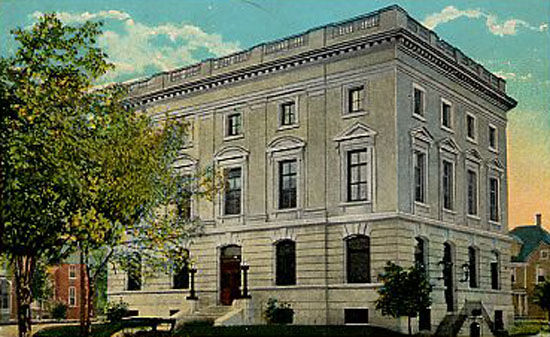 Courthouse Park, which federal officials described as a "dream site," would be the home to a fancy new $430,000 federal building and post office. In order to make room for the new edifice, the old courthouse would be demolished.

A Southeast Missourian editorial on Sept. 27, 1940, questioned the idea, stating bluntly, "This newspaper opposes giving up Courthouse Park under any circumstances."

Nevertheless, at a special election held March 4, 1941, a majority of city voters approved the idea by a final tally of 1,612 in favor and 1,344 against. It appears voters were swayed by the promise of a shiny new federal building. City officials were happy about not spending any more money on maintaining the deteriorating Common Pleas Courthouse. Since the courts and city offices would move into the vacated post office building, it seemed like a win-win situation.

By June 1941, the federal government had completed a survey of the courthouse grounds and work on the design of the new building was set to begin. However, plans started to unravel a few months later when legal questions were raised about whether the city actually had clear title to the courthouse and grounds.

When Cape Girardeau was first platted in 1806, Louis Lorimier had designated a spot for a future courthouse. The street on either side of the public square was called Themis Street after the Greek goddess of justice and order, a surprisingly poetic choice for a frontier town. 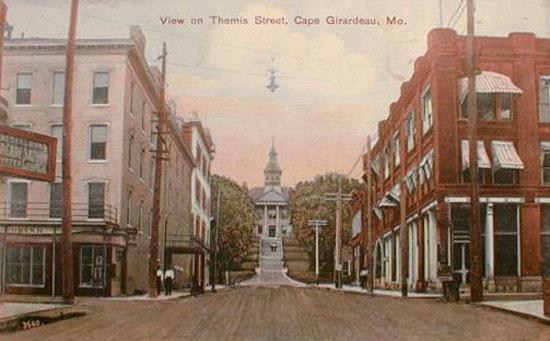 After Lorimier died, Cape Girardeau lost the county seat to Jackson, so the land for the public square reverted back to his estate. In 1821, his heirs donated four acres to the city for a public park. Their deed stipulated: "Provided, always, That the several tracts of parcels of land thus granted to the town of Cape Girardeau and the citizens thereof shall remain forever affected and appropriated to the public uses to which they are respectively intended, and that they, nor any part of them, shall never become private property."

A lawsuit was filed by Mrs. Iska Carmack, a descendent of Lorimier, arguing that the deed prohibited the federal government from wiping out the park. The litigation dragged out for several years. In a surprising twist, the U.S. Court of Appeals ruled in favor of Carmack.

For a short time, it appeared the courthouse would be saved. However, in 1946 the U.S. Supreme Court reversed the lower court decision, ruling that the federal government's power of eminent domain trumped the deed restrictions.

In April 1947, the city and federal governments officially swapped titles to the courthouse and old post office. Even with the Supreme Court decision, however, the litigation wasn't completely settled. It still wasn't clear whether the Lorimier heirs were entitled to any compensation from the federal government.

During all of this wrangling, the city was rapidly growing to the west. People were starting to question the need for a new federal building and post office at the far eastern end of town. A newspaper editorial suggested choosing a new post office site. This, of course, would have the side benefit of saving the old courthouse.

Meanwhile, Congress was dragging its feet in appropriating money for the new building. When a delegation of senators visited Cape in 1951 on unrelated business, Sen. Spessard Holland of Florida expressed dismay that such a "magnificent" building would be bulldozed. He stated, "For them to talk about destroying it just isn't right."

The mess was finally resolved in 1956 when Congress passed a bill allowing for a "do-over." Title of the courthouse and post office would be swapped again. After some last minute red tape, this transaction finally occured on Sept. 17, 1957. 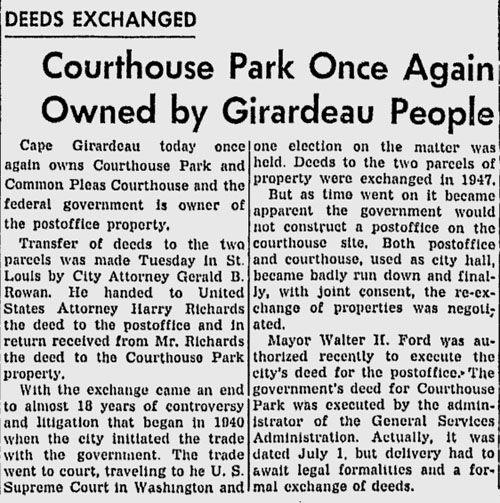 It wasn't a complete victory for historic preservation. The old post office building, itself a notable landmark, was later demolished to make way for a second federal building (which has since been made obsolete by a third federal building). Nevertheless, Common Pleas Courthouse was rehabilitated, the park saved, and countless tourists have snapped photos of the view.

The wheels are now in motion to officially nominate the courthouse to the National Register of Historic Places, a process that will take many months. Despite the recognition, the building's future is cloudy again. The lack of wheelchair access poses a serious problem. Even if the courts and offices are eventually moved to a new location, let's hope Cape Girardeau doesn't try to make another short-sighted decision to allow the building to become bulldozer bait. 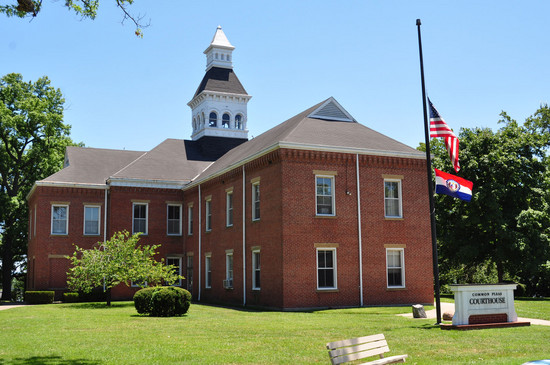