We should bring back the "City of Roses"

The writers for "The Simpsons" must have visited Cape Girardeau at some point. In a 2008 episode, the mayor of Springfield nearly bankrupted the city after spending megabucks to hire a consultant to develop a new city slogan. The result? "Springfield: Good."

After watching that scene, it's hard not to think of Cape Girardeau and our own slogan, "Where the River Turns A Thousand Tales." While not quite as lame as Springfield's slogan, it's still a laughingstock. The slogan, referring to the Mississippi River and the Storytelling Festival, makes logical sense in the world of marketing consultants, but doesn't mean much to anybody else.

The Convention and Visitors Bureau is thinking about rebranding the city's marketing approach as a family destination rather than a historic destination. Perhaps this shift in strategy will offer the opportunity to quietly retire the slogan and replace it with something more inspiring.

I'd like to suggest bringing back the old moniker: "City of Roses." We don't have many roses these days, but so what? We continue to call our town Cape Girardeau even though we don't have many capes, either*.

(*On second thought, please ignore that last sentence. I don't want anybody to get any crazy ideas about changing the city's name. We might end up with an abomination like "River Tales City", "Jackson Girardeau", or "Mississippi River City Sponsored By P&G.")

History of the roses

The "City of Roses" slogan dates back to an era when Cape Girardeau grabbed national attention for the "Ten Mile Rose Garden" along Highway 61.

Louis Houck, railroad tycoon and civic leader who seemed to be involved in everything, first proposed the idea for a parkway between Cape Girardeau and Jackson. In a letter to the editor in 1924, he described his plan for building a "double boulevard" between the two towns, lined with native trees, shrubs, and flowers.

Houck argued that his proposal, while more expensive than a standard highway, would beautify the area and save lives. He wrote, "And it will not only double the value of the land along the road, but will greatly add to the value of all the land in the county and thus, more than in any other way, the good name and reputation of the county will be promoted." By building a median between the lanes, he knew that the parkway would be safer by preventing head-on collisions. "[M]any men, women and children will be saved from being crippled or injured for life," he wrote.

In the early 1920s, highway engineering was still in its infancy and safety was often overlooked. Houck was ahead of his time. While his plan received favorable support from the newspaper and community, the state highway commission couldn't justify the extra expense. The final plan was to build a standard 18-feet, two-lane highway between Cape and Jackson, although extra right-of-way was procured so that the road could be widened in the future.

The extra space came in handy. As part of a statewide beautification program, the highway department started to plant rose bushes along the highway soon after it was built. According to one story, the roses were surplus property from a nursery that the state had acquired.

While not as elaborate as Houck's parkway idea, it didn't take long for Highway 61's roses to start getting noticed. One motorist was busted for stealing roses from the highway in 1932. In 1938, a newspaper publisher from Illinois visited the area and described the scene as a "valley of roses."

Under the direction of Hillard Brewster, state landscape director, and then J.L. Rose, highway department foreman, more and more roses were planted along the highway until it earned the name Ten Mile Rose Garden.

By 1949, the garden had grown to include 26 groupings of roses. It was featured on the cover of The Highway Magazine (circulation two million). The magazine called it "the most beautiful highway west of the Mississippi River." Reader's Digest published a color photo of the garden at a time when printing color photos was still a big deal. 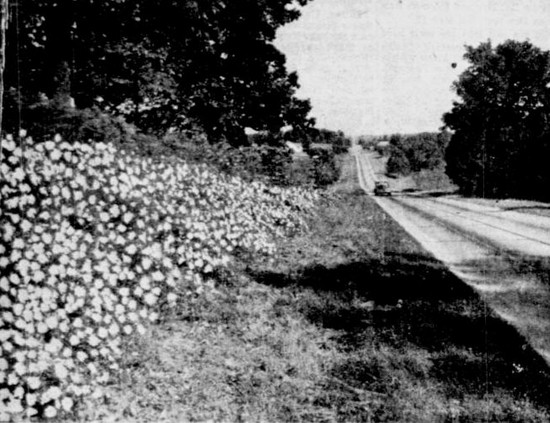 The newspaper reprinted this photo that appeared on the cover of The Highway Magazine.

Maintaining the rose beds at Ten Mile Garden proved to be difficult. A newspaper article from 1952 described the challenges, but was hopeful that new funding from community organizations could enlarge the existing rose beds to "regain for Ten Mile Garden the reputation it once had."

Despite the optimism, the garden began a steady decline. In 1965, the Southeast Missourian reported: "[I]n the past 10 years the garden has not been maintaned by the [state highway] department because of construction work on Interstate 55, widening of sections of Highway 61 and general lack of funds. As a result the garden gradually lost its beauty and is now only a shell of its former grandeur."

Before long, the sprawl surrounding Highway 61 completely smothered the last vestiges of the rose garden. One article from 1989 mentioned a proposal to revive the "City of Roses" slogan by planting roses at major city intersections, although it appears this idea didn't gain much traction beyond some beautification work at the Route K interchange.

Today, with the exception of the Capaha Rose Garden, the city's public spaces are mostly rose-free. As a result of circumstances, the Ten Mile Rose Garden, quite possibly a national treasure, was squandered.

If the region is interested in building a family-friendly tourist atmosphere, how about re-creating the rose garden parkway? Highway 61 between Cape and Jackson isn't an option anymore due to space constraints, but both towns have plenty of other highways that could use beautification.

Interstate 55, in particular, offers plenty of right-of-way, especially around Center Junction where it straddles the city limits of both towns. The only things that catch the eye along I-55 are billboards, and that's not something to celebrate.

Transforming I-55 into "the most beautiful highway west of the Mississippi River" isn't going to happen, but we could at least give it a makeover. If enough roses are planted, we can truthfully bring back the "City of Roses" slogan. Add in a few trees and shrubs, and all of a sudden I-55 would become the "double boulevard" that Louis Houck originally proposed way back in 1924.