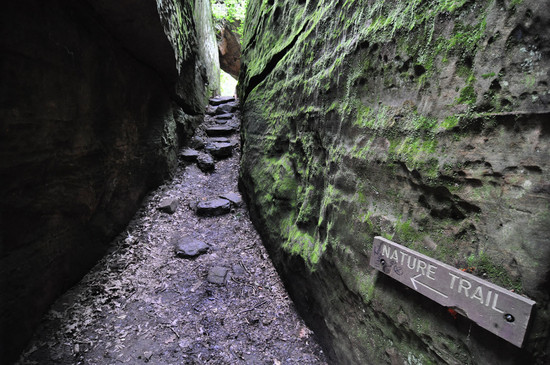 I've always tried to focus on obscure destinations and hiking trails that most people haven't visited. The downside to obscure places, however, is that they are filled with weeds, cobwebs, ticks, and mosquitoes during the summer. If you're the first visitor of the day (or week), then the biting insects will treat you like a walking buffet.

At popular state parks, the trails are well-trodden, keeping the weeds and cobwebs to a minimum. More visitors mean that the tick-to-human and skeeter-to-human ratios are more favorable, resulting in less bites.

The notable exception is Ferne Clyffe State Park in Illinois, which I believe can be declared as the Tick Capitol of the Midwest based on hard facts and figures (and my red-splotched ankles). This blog, however, is about Giant City State Park at Makanda, Illinois. I hiked four of the park's trails recently and emerged from the woods almost completely free of tick and mosquito bites. Amazing!

Your experience may vary, but Giant City has earned the Pavement Ends' You Probably Won't Get Carried Away By Mosquitoes Seal of Approval. Below are some highlights from the park.

Featuring rock formations that resemble buildings and streets from a giant-sized city, the Nature Trail is the namesake for the park and the most popular trail.

The one-mile loop trail approaches the Giant City on a short boardwalk. 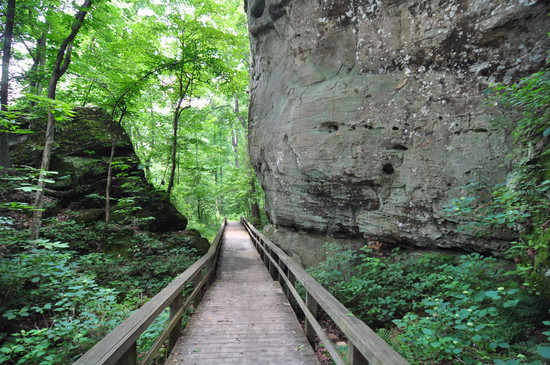 The trail then enters a "street" between rectangular shaped "buildings." The scene is similar to the Panther Den, but much more accessible. 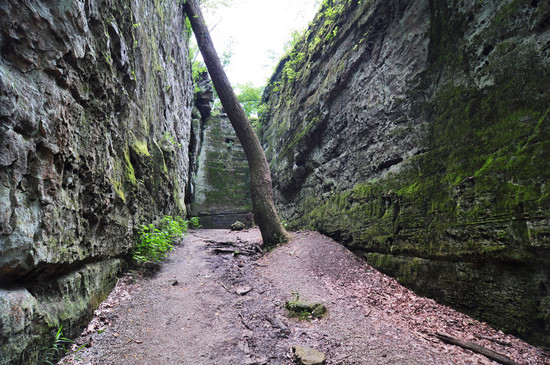 Turning right at an "intersection", the trail narrows into an "alley." 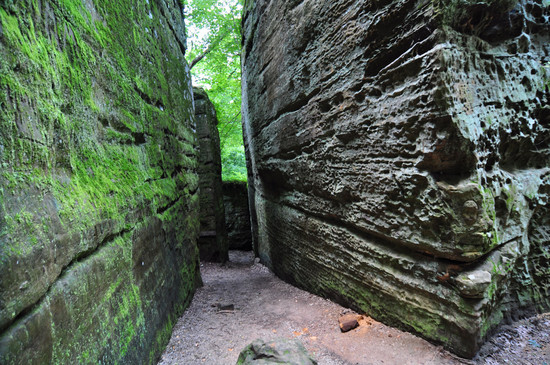 Making a left turn, the trail squeezes into a narrow passage and goes under a precariously balanced rock. 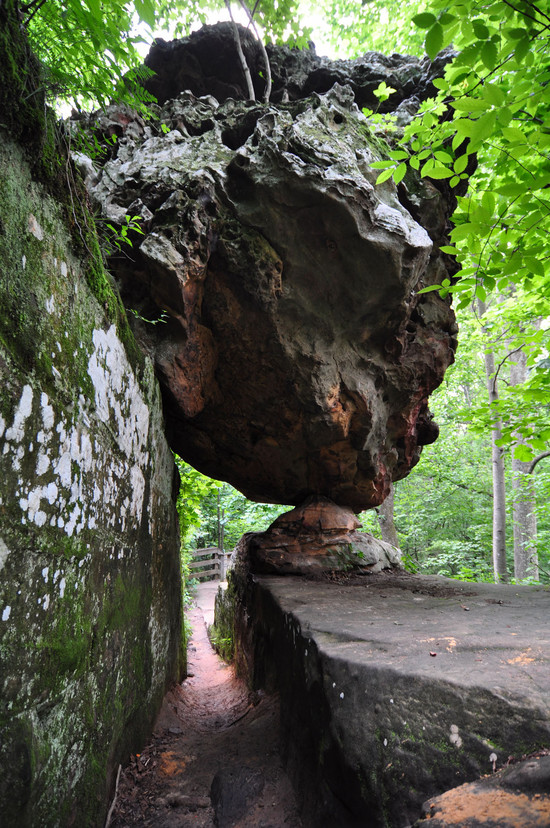 If Satan needed a table, it might look something like this, an isolated rock chimney too tall to serve any other purpose. 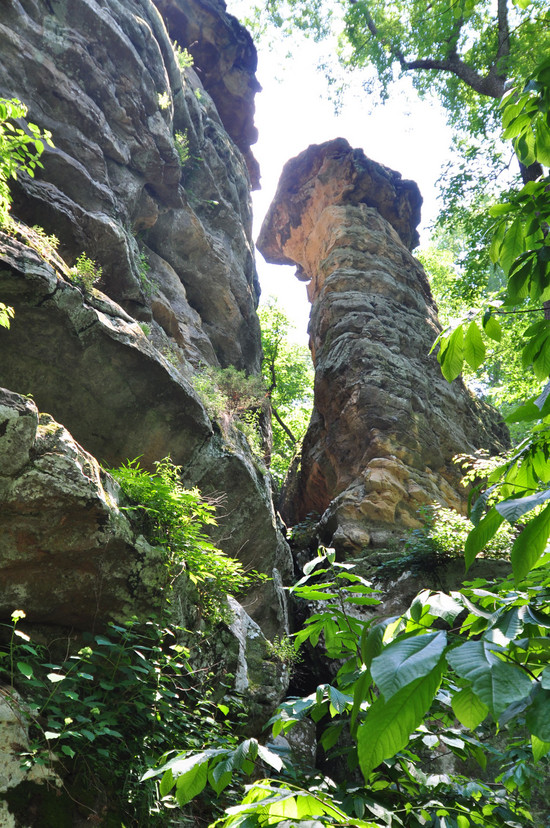 Located just down the road from the Nature Trail, the Devil's Standtable Trail provides access to a tall bluff featuring this and other crazy rock formations. This bluff is one of two places in Giant City State Park open to rock climbing and rappelling.

A short spur from the one-third-mile loop trail leads to a jumble of rocks that could almost be called the "Devil's Staircase." 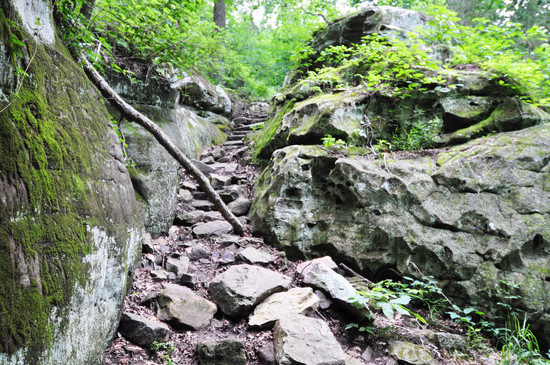 The park's main entrance road passes through a canyon lined with bluffs on both sides. One of the taller promontories, jutting above the road, was the location of a prehistoric Native American site. 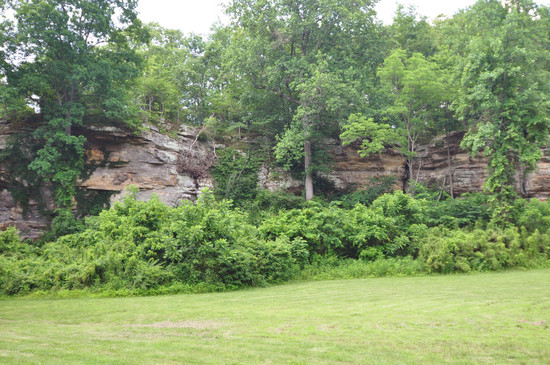 Flanked by a man-made wall of rocks, it was first thought that the site was some kind of fortification, dubbed a "stonefort." Southern Illinois contains several examples of these stoneforts, but their exact purpose remains open to debate. A short trail leads to the top of the bluff and through the wall. 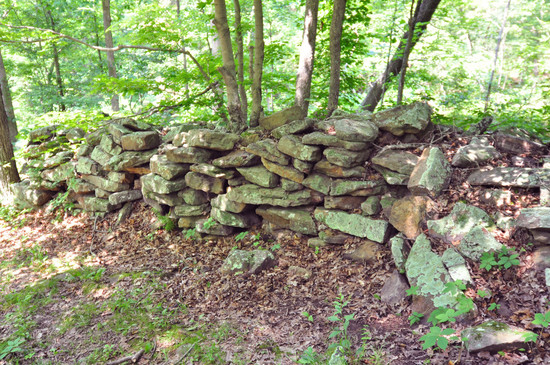 Two miles long, the Trillium Trail is a strenuous hike that runs below and above a long series of tall bluffs. The best scenery is actually next to the parking lot, including a small cave just to the right. 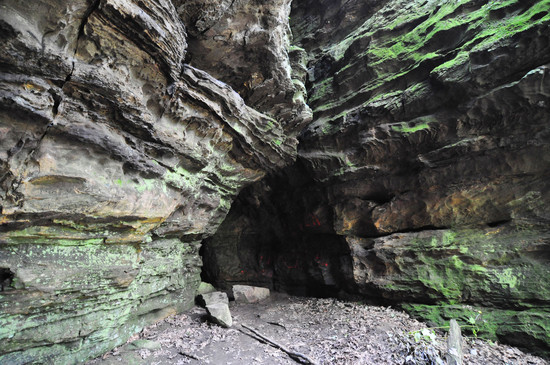 The opening in the rock is just deep enough to require a flashlight. 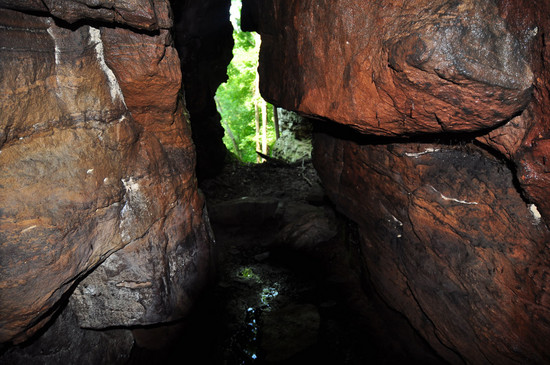 Half of the trail follows the foot of the bluffs, offering views of the many nooks and crannies above. 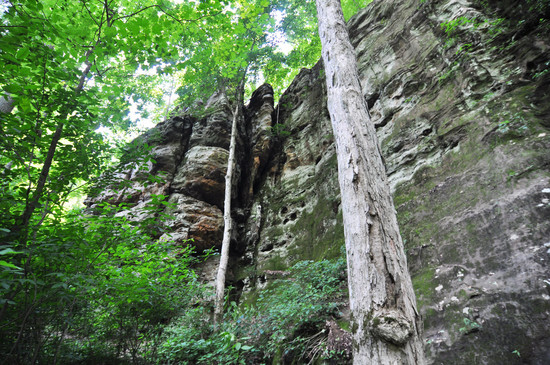 After a strenuous climb to the top, the rest of the trail traces the top edge of the bluff. This is not a good place for those afraid of heights. 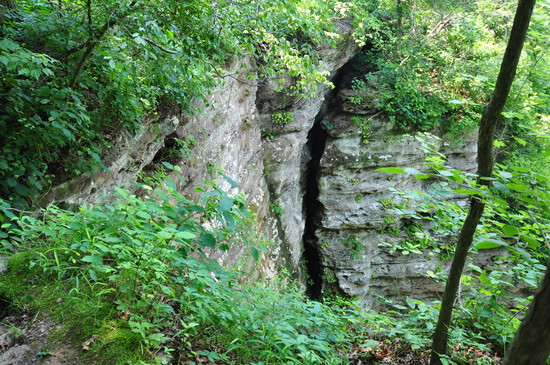 For a shorter, less difficult hike, you can skip the climb to the top and just stick to the lower trail near the trailhead.

From Cape Girardeau, cross the Emerson Bridge and take Highway 146 through McClure, Ware, Jonesboro, and Anna. At the other end of Anna, turn left on US 51. Follow the highway north for 11 miles and turn right on Makanda Road. Follow the signs for the park, curving through Makanda and then veering right to enter the park.

The parking lot for the Trillium Trail is on the right immediately after entering the park. If the lot is full, you can park at Shelter #1 and take a shortcut to reach the trail.

Continue down the road to reach the Stonefort Trail parking lot, on the right.

The Nature Trail parking lot is just down the road, on the right. If the lot is full (a definite possibility), go back and park at Shelter #2. There's a cutoff trail just behind the shelter.

Giant City State Park is a large, sprawling area, so be sure to print a copy of the park map. You may decide to skip some of the trails and head straight to the Giant City Lodge.