This week brought two important news stories about Missouri's state parks. First, the good news: The Southeast Missourian reported on Wednesday that attendance at state parks and historic sites increased 6% in 2009 over the previous year, ending a decade-long string of declines.

Now, the bad news: The National Trust for Historic Preservation announced its list of America's 11 Most Endangered Historic Places this week, with "State Parks & State-Owned Historic Sites" topping the list. Their website discusses the funding crunch facing Missouri's state parks, with our very own Trail of Tears State Park given as a prime example.

Here is what they say about Trail of Tears:

Caring for state parks and state-owned historic sites involves a lot of moving parts, from ongoing building repairs to mending and upgrading major infrastructure systems. Two examples of state parks -- Trail of Tears and Katy Trail -- illustrate well the need for adequate resources. The dam at Trail of Tears State Park, where Cherokee Indians crossed the Mississippi in the harsh winter of 1838-39, suddenly slumped in 2008. This forced park officials to lower the lake level, which meant the lake had to be closed to swimmers, which in turn decreased camping and park attendance, reducing the spin-off economic benefits to the local economy. It will take $750,000 to repair the dam, one of 40 in the Missouri state park system.

In fairness, the problem at Lake Boutin is secondary to the park's primary purpose of memorializing the Trail of Tears tragedy. I would argue that restoring the popular Sheppard's Point Trail, damaged by flooding in 2008, is a higher priority, one that will hopefully be accomplished this summer thanks to federal stimulus funding for the State Park Youth Corps.

Short-term federal grants, however, don't change the fact that Missouri sales tax revenue is in the toilet. The National Trust paints a bleak picture for another state park, the Katy Trail:

One hundred fifty miles of the highly popular 236-mile-long Katy Trail State Park -- the longest rail-trail conversion in the nation -- is in the floodplain of the Missouri River and hence subject to periodic flood damage. With nearly 500 bridges, 1,000 culverts, 60 buildings, and miles of surface requiring constant attention, the trail's current estimated backlog of needed rehabilitation is $47.5 million, not including the cost of a new 46-mile extension to Kansas City.

Another popular park, Route 66 State Park near St. Louis, also has a serious problem. The park straddles the Meramec River, connecting the abandoned townsite of Times Beach with a vintage Route 66 roadhouse serving as a museum and visitor's center. However, the historic bridge connecting both ends of the park -- an unusual steel truss bridge built to carry Route 66 -- has been closed to all traffic, including pedestrians, after inspectors determined that it could collapse. 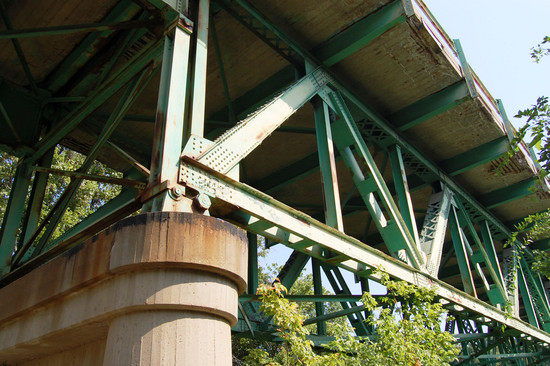 The bridge, when viewed from below, reveals rust and corrosion problems

In a better economy, restoring the bridge would be a no-brainer. It's on the National Register of Historic Places and serves as the centerpiece for a state park dedicated to preserving the memory of The Mother Road. But there's no money available for even basic restoration work, so the bridge will likely be demolished in the near future. Without the bridge, Route 66 State Park might as well change its name to Route 66 Isn't Here Anymore Good Luck Getting To The Other Side State Park. 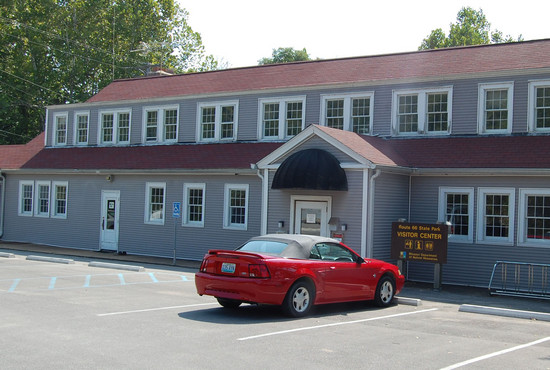 The Route 66 State Park visitor's center, now cut off from the rest of the park.

The Missouri Alliance for Historic Preservation included the Route 66 Bridge on its list of Missouri's Most Endangered Historic Places for 2010. They write:

Being one of the most visited State Parks in Missouri at around 250,000 visitors per year, park attendance has dropped since the bridge's closing to vehicular traffic in October 2009. There is strong support from a number of local and statewide groups to preserve this bridge. The preference of the Missouri Department of Transportation (MoDOT) appears to be the removal of the bridge unless another party assumes ownership and rehabilitation responsibilities.

Thus, the plight of Missouri's state park system has been recognized as a historic preservation priority both at the state and the national levels.

What's the solution? I don't have any good ideas. Well, I do have one idea, but it's likely to be so controversial -- almost blasphemous -- that I better save it for another time.