Rumors have been circulating in Piedmont, Missouri, that a "large gold nugget" was recently discovered in the vicinity of Gold Hill.  Until now, I've always assumed that the name of Gold Hill, a small summit northeast of Piedmont, didn't mean anything.  It was probably named for an early settler like Ernie Gold or something. 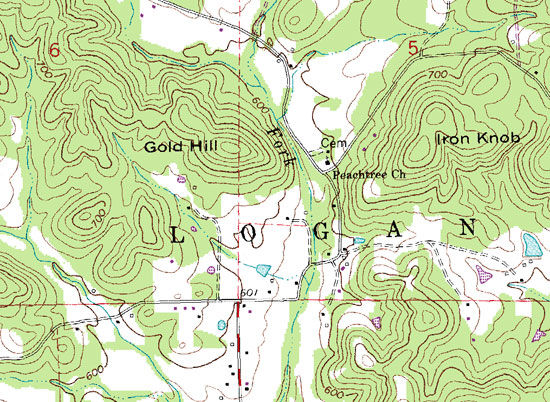 But could this be the home to the motherlode?  So far, I haven't been able to confirm any details of the gold strike, but one Piedmontian did mention that a large number of No Trespassing signs and purple-painted posts have been erected around Gold Hill during the last couple weeks.

"Coincidence? I think not!" my informant said.

While the area surrounding the hill is privately owned, I figured it might be possible to do some gold-panning downstream along Clark Creek. 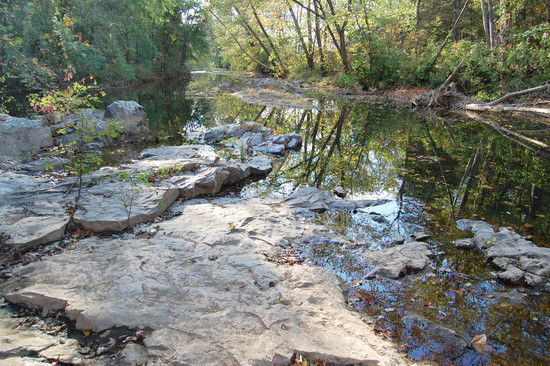 The creek is scenic, but yielded exactly 0.0 ounces of gold after a hard morning of work.

I decided to try a different approach: ask around at the Small Town Gossip Nerve Center, also known as the barber shop.  It seems everybody at the barber shop had heard the rumors, but nobody knew anything concrete.

"My cousin's friend's mechanic mentioned that somebody was digging for a septic tank when they found a gold nugget this big," the barber said while gesturing.

One customer quickly chimed in, "Oh, well I heard that they found a big seam of gold and that a mining company from Colorado offered to buy the whole mountain for $100 million!"

Armed with this knowledge, or lack thereof, I tracked down a university geologist and asked whether the story was even plausible.  Wishing to remain anonymous during our phone interview, he reluctantly admitted that it wasn't completely out of the realm of possibility to find gold in the Missouri Ozarks.

"This is part of the same mountain range as the Silver Mine in Madison County where decent quantities of silver and trace amounts of gold were extracted during the 1800s." He added before hanging up, "Now if you'll excuse me, I've got to figure out what I've done with my pick-axes and topographic maps.  What's the coordinates for Gold Hill again?"

With details so sketchy, it's hard to say whether Piedmont is about to experience the Great Gold Rush of 2010, or whether this is just a lame April Fool's Day joke.