Drive on the oldest road in Missouri

Missouri has over 123,000 miles of public roads. We've come a long way since the very first road was blazed in the early 1700s.

Called the Three Notch Road, Missouri's first road connected the lead mines at Mine La Motte with the newborn town of Ste. Genevieve. The road, if you can call it that, was little more than a horse trail through the woods. It was so difficult to follow that travelers had to keep a sharp lookout for three notches etched into trees along the route. 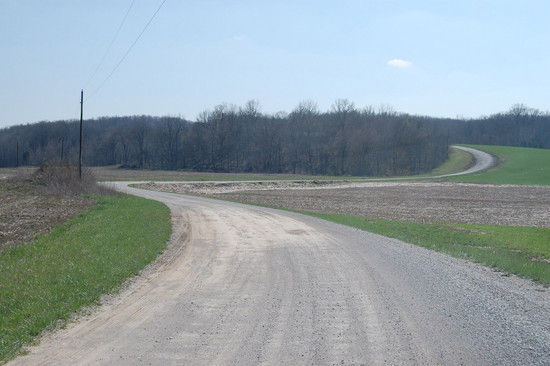 The practice of notching trees continued into the early 1800s. According to one source, it was common to mark minor roads with one notch, secondary roads with two notches, and major roads with three notches.

The Dec. 20, 1940, edition of the Southeast Missourian includes this curious item: "E.B. Dickey, an employee of the state-wide highway planning survey, who is making a study of old roads and trails in the state, recently located several of these old notched trees in the northeastern part of Madison County, of which he has several pictures."

I don't know if any of those trees remain, but the original Three Notch Road is still mostly intact and driveable. The definitive history of the road was written by Milan James Kedro, who first retraced the route as part of a Boy Scout project. In a 1973 article, he wrote: "By traveling state highways and backroads in a southwesterly direction from Ste. Genevieve, it is possible to parallel rather accurately the path of the old trace."

Kedro's article, however, didn't give specific driving directions. He did mention that the road forded the South Fork of Saline Creek at the "Old Burnt Mill" in Perry County. 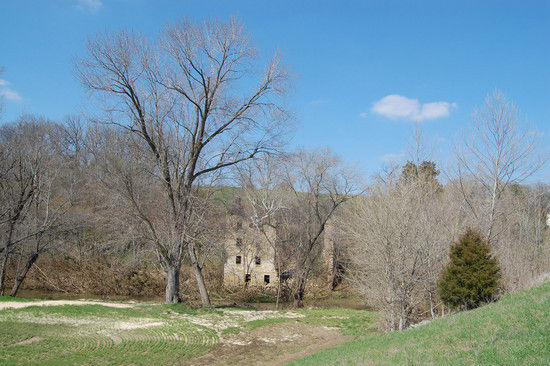 The ford was a convenient stopping point because it was roughly half-way between Mine La Motte and Ste. Genevieve. In the 1800s, a series of mills were built to take advantage of the current along Saline Creek. The largest mill, a massive four-story stone structure, was built in the 1850s. It burned during the night of Oct. 12, 1866, never to be rebuilt. 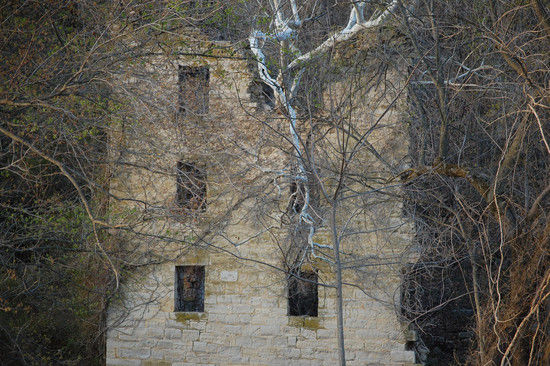 Even after 144 years, three of the walls remain standing, a bizarre scene for rural Perry County. The ruins are best viewed in the winter from the bridge on Perry County Road 840. 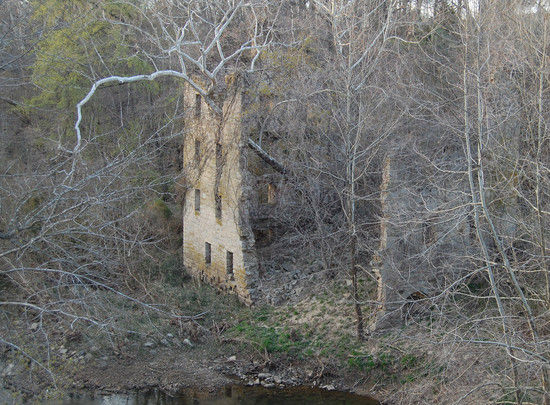 Falling trees and flash floods have taken their toll, but the mill ruins are still impressive. The whole thing looks pretty unstable, though, and will continue to crumble. 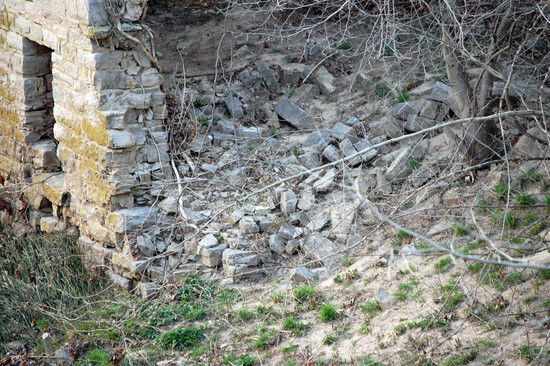 Southwest of the Burnt Mill ford, the Three Notch Road followed a high, narrow ridge that separated two deep hollows. This stretch was called "The Narrows" (or shortened to "The Nars"). 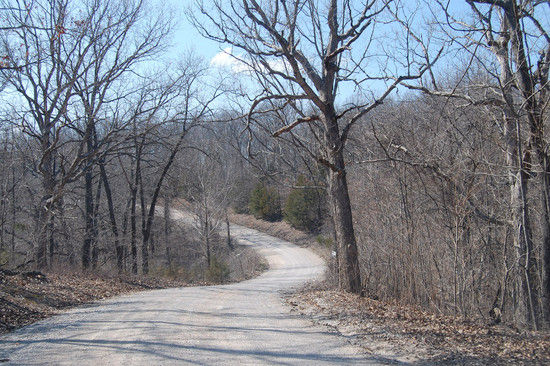 From there, the road stuck to high ground when possible, skirting around the headwaters of Whitewater and Castor rivers. Naturally, early travelers wished to avoid muddy creek crossings as much as possible, even if meant climbing over difficult terrain.

At a place called Cross Roads, the road apparently intersected the Farmington-Jackson road, a road that is still called "Old Jackson Road" in St. Francois County.

Approaching Mine La Motte, the road probably crossed Rock Creek near the Madison County line. The current bridge over Rock Creek, a small concrete structure from 1919, was one of the first bridges designed by the newly created Missouri State Highway Department. 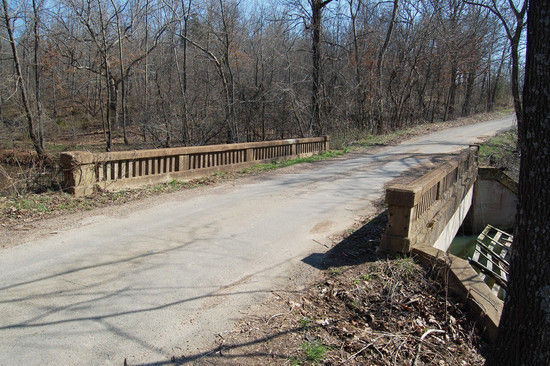 The road's starting point at Mine La Motte is marked by an historic marker along Route OO (formerly US 61/67). 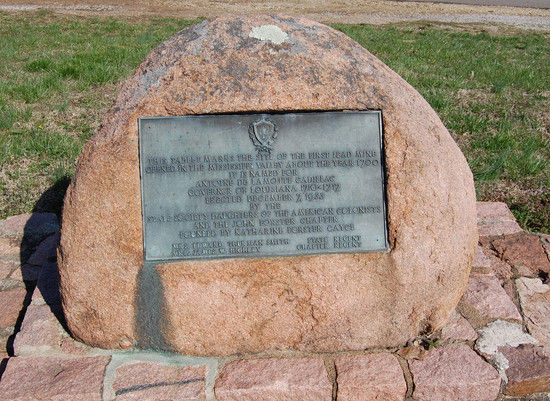 It says, "This tablet marks the site of the first lead mine opened in the Mississippi Valley about the year 1700. It is named for Antoine De LaMotte Cadillac, Governor of Louisiana, 1710-1717."

The lead mines played a key role in local history, providing a reason for people to venture to this side of the Mississippi River. The Three Notch Road made it possible to transport the valuable lead to the outside world, creating Missouri's first industry. While the road soon faded in importance thanks to other roads and railroads, it remains as a scenic byway and historic site.

I've drawn the path of Three Notch Road on this Google Map (in blue). Some of the route is a guesstimate, especially since the location of Ste. Genevieve has changed over the years. It's possible that some miners used an alternate route heading to the river landing at St. Mary (in red).

To reach the Old Burnt Mill from Cape Girardeau:

Take I-55 north to the Brewer interchange (Exit 135). Turn right on Route M, then make a left on US 61. Bear left on Route NN. After 3˝ miles, turn left on Perry County Road 840. Drive down the hill and look for the mill on the right while crossing the bridge.

Continue on CR 840 past the mill. At the intersection with CR 842, bear right up the hill. Follow CR 842 (also called Burnt Mill Road) until it ends at Route N. Turn left and continue on Route N until the pavement ends. Continue straight on Holmes Road. After a few miles, the road ends at Route WW. Turn left on Route WW, then turn right on Route T. Eventually, Route T will make a sharp right curve at the intersection with Old Jackson Road. Turn left here to join Old Jackson Road, then veer right on Rock Creek Road. At Route OO, turn left. The Mine La Motte historic marker is about one mile away on the right side of Route OO.