A 1920 roadtrip on the Bloomfield Road

While researching the history of the Bloomfield Road, I found an amusing item from the Nov. 24, 1920, edition of the Southeast Missourian.  It describes a Sunday drive from Jackson to attend a church dedication at Parma, southeast of Dexter.  The drive down was uneventful, but on the way back, one of the cars became separated from the rest of the group.  Suffering through a series of misadventures, this car finally reached Jackson at 2 AM. Sadly, the writer doesn't reveal the identities of the driver or passengers.

Here's the story in its entirety:

ACROSS THE HILLS AND VALLEYS OF CAPE GIRARDEAU DISTRICT

On last Sunday, the weather promising to be good, several car loads of people undertook the journey from Jackson to Parma, a distance of about 80 miles.

Starting from the Cape Girardeau County seat before the break of day, the party found itself bowling along the splendid highways of his county at the dawning of what promised to be a perfect day. At Gordonville the street lights were still blinking into the face of the morning when the cars passed through with a roar and swirl on the way south. Turning to the right a few miles south of Gordonville, the party mounted the picturesque Hager Hills without mishap to drop down into the flat lands surrounding Allenville. 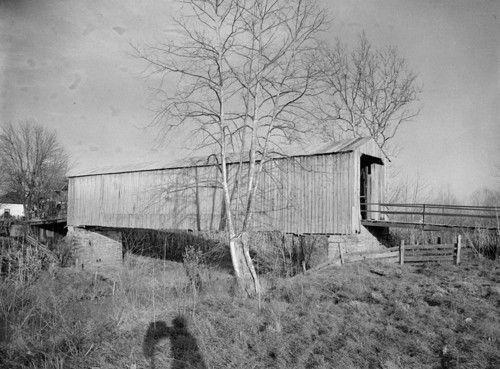 The little town was soon past by, and the way led out over the historic covered bridge over Whitewater river, and the immense modern steel structure over the Diversion Channel of the Little River Drainage ditch. After that, the real climbing, to gain the summit of Hickory Ridge, began, but all cars were equal to the occasion. Tobogganing down on the south side, part the most romantic little log school house, hidden in a ravine, the party traversed Rum Branch, and shortly thereafter passed into Stoddard County over beds of sand. Walnut Ridge, Aquilla, Advance were taken in short order, and the overwhelming plains enveloped the party on all sides for several miles whjen the road again led up hill and down hill, until the bottoms of the Castor River were reached, from where the fine road led gently upwards into the pretty town of Bloomfield, the county seat of the kingdom of Stoddard. Passing out of Bloomfield it was again a case of climb and slide of the many picturesque hills on which grow all sorts of oak and hickory, interspersed with shrub and thicket, among which several mighty fires raged. 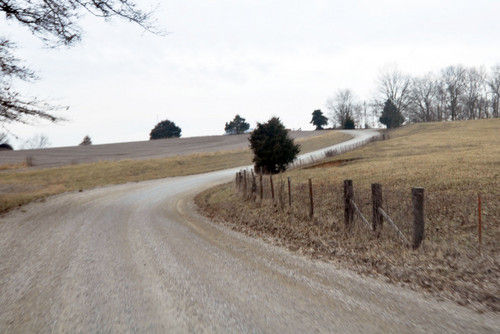 Even today, the old road from Allenville faces a steep climb of Hickory Ridge

Dropping down from the heights the party found itself in the suburbs of Dexter, and left that place in a south-eastern course over a road that zigzags through the most fertile lands in the world, level as can be, and cut at regular intervals by drainage ditches, until a road leading south as straight as a surveyor can make it for about twenty miles, all level and road in good shape. At the end of that stretch the prosperous village of Parma was found, and was chosen as the stopping place. The party attending the dedication services at the Grace Lutheran church, just finished, and were regaled with sumptuous dinners by the members of the congregation and its pastor.

Dinner over, several members of the party began to scan the horion apprehensively, as clouds began to appear on every side, and some of the party knew from past experience what a trip of eighty miles in the rain means. Their fears were allayed by the optimism of others of the party, and the start home was not made until 3:30 p.m., following the afternoon services. Going straight north, one of the cars became possessed, and ran away from the others, also failed to turn off at the right place, and found itself in the lumber town of Huntersville east of Essex. Turning sharply to the left, and passing through Essex, this car reached Dexter just as the lights began to appear on the streets, on the autos and in the homes. As this particular car had no lights, and none could be obtained in Dexter, the chauffeur purchased an ordinary lantern and tied it in front of the radiator and with this make-shift, he found his way over the hills of Stoddard County to Bloomfield. Meanwhile the clouds had become threatening, and occasionally a flash of lightning warned the travelers to hunt cover. A garage in Bloomfield kindly took in the wayfarers, and the mechanics got busy on the lighting system on the henryford, while outside the thunder rolled and rain fell in torrents. Being fully equipped with lights and Weed chains, the auto again ventured forth from Bloomfield after the rain had subsided, crossing Castor and bravely began to mount the inclines to the north. Soon the mud disappeared, and the skid chains were removed. The moon again shony in all its glory, and the party began to feel safe, while the motor purred pleasantly on level road and hummed viciously going up steep grades. Suddenly a severe jolting warned the party that something was wrong. An investigation brought out that a tire was flat. Having lost his pliers, the chaffeur aroused a nearby farmer to borrow a pair, and the tire was inflated, the pliers returned, and another start was made. Stop number two: flat tire again. Some more pumping of air, and another start. About a half mile further, another stop: flat tire again. The chauffeur left the party in the road to again appearl to a farmer, while the others worked over the infernal inner tube. A party coming from Advance swept majectically by the wrecked crew, while the cheerful news hurled at them that the nearest garage is six miles north, but did not stop to offer help. 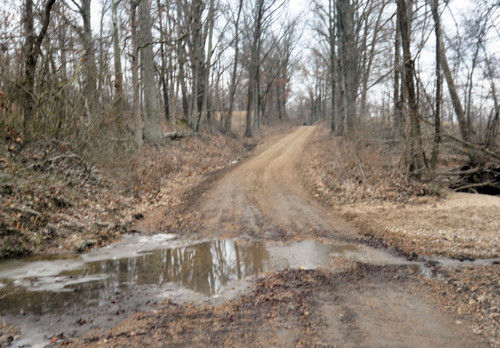 This stretch of the original Bloomfield Road between Advance and Aquilla provides a glimpse of what road conditions where like in 1920.

Meanwhile the chauffeur had succeeded in arousing the farmer, who proved to be a gentleman in every sense of the word. Not only did he put at the disposition of the chauffeur all his extras and tools, he came down to the stranded car, and proved himself a true Samaritan. He also proved himself to be a mechanic, and in a short while had the fixed in good shape and when asked what his bill was, said: "You owe me nothing." This man's name is Harris, and if he ever comes to Jackson, nothing will be too good for him.

In due time Advance was reached and left behind, but on the way to Rum Branch mud was encountered again, and the real trouble began when the climbup Hickory Ridge was begun. Slipping, sliding and twisting the machine finally mounted the heights, and the dangerous descent began. It was made without accident, except that several of the party had suffered from palpitation of the heart, and the car nosed its way over the covered bridge into Allenville. More hard sledding north until the foot of the Hager Hills was reached, when the chauffeur declared that his bus could not possibly climb these elevations, turned his machine toward Dutchtown to the east, and slid back and forth in the road along the bluffs until the town on Hubble Creek was reached, and where it was found that the engine in the car was red hot, and just about out of gasoline.

Midnight had come by that time, but still the general store was open and a party of young men volunteered to find a garage owner, who was enjoying himself at a dance in the Woodman hall across the creek. After a wait of about twenty menutes, he appeared, and the fuel shortage was soon abated. Now the party rolled merrily along towards Cape Girardeau, and from there to Jackson, which town was reached at just 2:00 o'clock a.m. The party was tired, muddy, sleepy, cold, but happy and in good spirits. It was a great trip, just the same.

The thing that struck the members of the party as an awful waste, is the fact that thousands of acres of finest cotton in the world, is allowed to rot in the fields of Stoddard and New Madrid Counties. The growers say that at two cents per pound, it does not pay to pick the cotton, and so it is allowed to go to waste in quantities that make a Cape County citizen shudder.