Visit the smallest "village" in the U.S.

The 2010 census is rapidly approaching, an event that will not only employ many census takers, but will keep sign-painters busy as they update the population figures on city limit signs.

Hopefully the new census will offer a solution to the peculiar situation at Lithium, Missouri, in Perry County. The 2000 census declared that the Village of Lithium had a population of zero.

The hamlet has several houses, an old storefront, and, according to Google Maps, five named streets (Ladie Rd., Blue Springs Ln., Williams St., Cross St., and St. Marys St.). So how could it possibly have zero people?

Well, it depends on how you define "village." Most people would look at the cluster of houses and say, "There it is." Indeed, that's what the highway department did when they planted a "Lithium" sign along Route M. 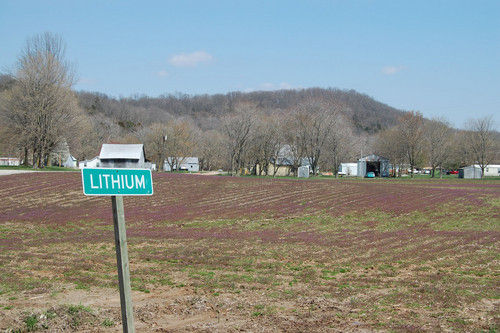 The Census Bureau begs to differ. For reasons that are unclear, they consider the incorporated village of Lithium to only include a tiny parcel of land that is approximately 1.23 acres in size. That's only 0.001924 square miles, or a little over 53,000 square feet. By comparison, a football field (with end zones) is 57,600 square feet.

Using data from the Census Bureau website, I was able to generate a map showing the triangular boundaries of this mystery tract of land, shown in white below: 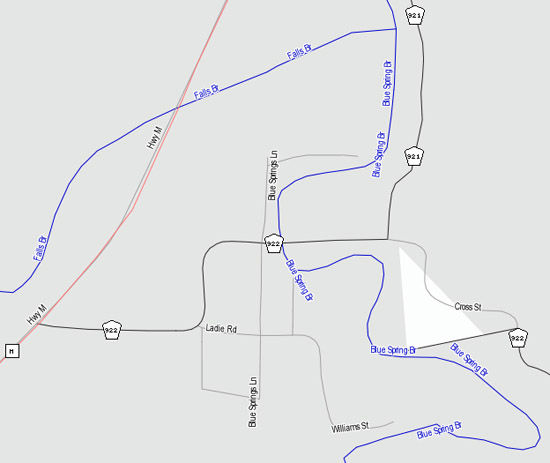 Among all incorporated municipalities surveyed by the 2000 Census, Lithium easily had the smallest land area.

This wasn't always the case. The 1980 Census listed a population of 81 with a larger incorporated area. The Lithium quadrangle map from the U.S. Geological Survey shows the larger village limits: 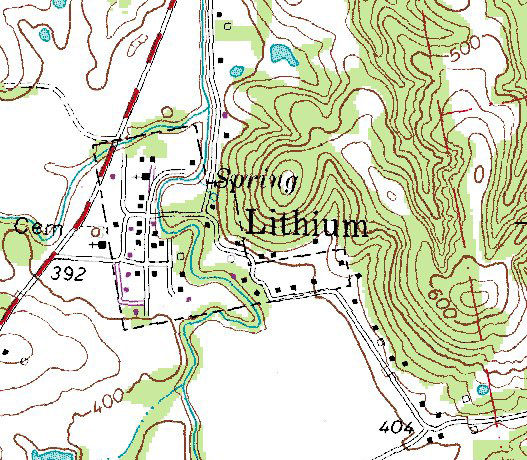 So why did the corporate limits of Lithium shrink so much between 1980 and 2000? I have no idea. It doesn't make any sense. Nevertheless, since no residents happened to live within this 1.23 acre sliver of land in 2000, the Census Bureau was technically correct in proclaiming that Lithium had a population of zero.

Lithium presents an interesting Catch-22 legal dilemma. According to an Associated Press story from March 2001, at least one resident would have to file a petition to formally dissolve the village under Missouri law. But there's nobody who can do that!

The village is worth visiting simply to see the Lithium Spring. 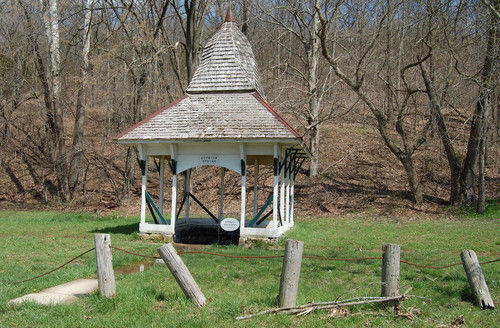 Charles F. Lawrence founded the town in 1882, hoping to take advantage of the medicinal properties of the lithium carbonate that flowed from the spring. At the time, some doctors prescribed lithium salts as a treatment for a variety of illnesses, ranging from gout to depression to mania, and even as a hangover cure.

The doctors were partially right. Lithium is indeed an effective treatment for the manic phase of bipolar disorder, and might be useful for other ailments. But it didn't live up to the wild claims made by marketers in the late 1800s and early 1900s.

Mr. Lawrence's dreams of establishing a major health resort around the Lithium spring fizzled, but the small town continued to grow. It was incorporated in 1883 and had a post office by 1884. A map from 1920 shows Lithium as a waypoint along the Cape Girardeau Northern Railroad between Perryville and Chester, Illinois. The rail line, bankrolled by Louis Houck, was never very successful and quickly became obsolete in the early 1920s with the coming of paved highways.

Despite losing the railroad and later the post office (discontinued in 1957), the village's real population has held mostly steady. There's still activity in Lithium, regardless of what the Census Bureau says.

From Cape Girardeau, take I-55 north to the Brewer exit (number 135). Take Route M east to US 61, turn right, and then turn left in Brewer to continue on Route M. Follow the road for almost five miles until you reach Lithium.

To get to the spring, turn right on Perry County Road 922 and follow the road as it zigzags left and then right through town. PCR 922 reaches PCR 921 at a T-junction; the Lithium springhouse is on the left.

Lithium is near other Perry County curiosities, including Falls Branch waterfall, Ball Mill Resurgence, the ghost town of Point Rest, and the crazy roadcut on Perry County Road 650 outside of St. Mary.