Missouri passed a curious law in 1967 that directs the state park board to "suitably mark and maintain every grave of a former governor in this state, which is not within a perpetual care cemetery." As a result, Missouri has three state historic sites dedicated to the graves of dead governors.

In Part 1 of this blog, I discussed two of these sites: Dunklin's Grave in Herculaneum and Jewell Cemetery in Columbia. The third cemetery, Sappington Cemetery State Historic Site, is the final resting place of two more governors, described below. I've also included a "bonus": the grave of a man who was not technically a state governor, but was a Missouri territorial governor.

It's hard to believe that the small town of Arrow Rock, Missouri, located along the Missouri River northwest of Columbia, was at the center of a 19th Century political dynasty. Three governors had ties to the town.

The story begins with Dr. John Sappington. He was one of the first doctors to reject the age-old practice of bloodletting, which, as we now know, typically did more harm than good. Sappington popularized the use of quinine to treat malaria. While other pro-bloodletting doctors initially accused him of being a quack, he made a fortune marketing "Dr. John Sappington's Anti-Fever Pills." In 1844 he published Theory and Treatment of Fevers, reportedly the first medical book published west of the Mississippi.

Sappington didn't stop there. He put his fortune to work as "business entrepreneur, agriculturist, land speculator and political confidant." Since Arrow Rock was located on the Santa Fe Trail, the opportunities for profit were immense. He had a large family, and his children married very well.

His daughter Lavinia married Meredith Miles Marmaduke in 1826. A wise choice, indeed, as Marmaduke would become lieutenant governor in 1840 and serve as governor for nine months in 1844 after the death of Gov. Thomas Reynolds. He is now buried in the Sappington family cemetery west of Arrow Rock. 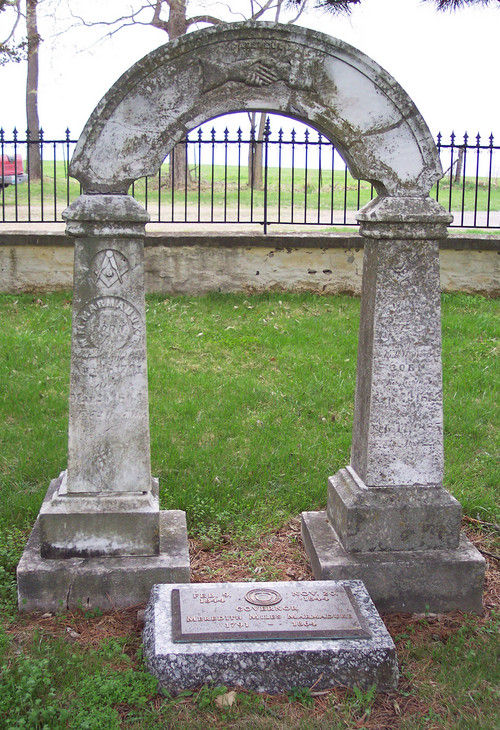 Marmaduke's son, John Sappington Marmaduke, followed in his father's footsteps. He was elected Missouri governor in 1885.

Dr. Sappington died in 1856, not living to see the election of another son-in-law as Missouri governor. Claiborne Fox Jackson took the office in 1861 at the beginning of the Civil War.

Jackson, it turns out, married three daughters of Dr. Sappington -- legally. They kept dying on him. He married Jane in 1831 and Louisa in 1833. When he asked for the hand of Eliza in 1838, Dr. Sappington is reported to have said, "You can take her, but don't come back after the old woman."

The Arrow Rock area was part of "Little Dixie", an enclave of Southern-style plantations and pro-slavery interests along the Missouri River. Coming from this background, it's no surprise that Gov. Jackson strongly supported the Confederacy as the Civil War unfolded. His attempts to help the South, either through direct military support or by pushing Missouri to secede, were thwarted. 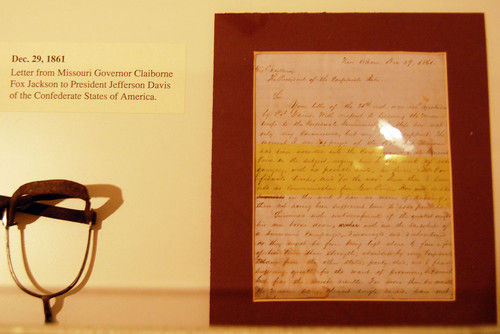 In this Dec. 29, 1861, letter to Jefferson Davis, Gov. Jackson pledges his full support to the Confederacy. The letter is on display at the excellent Arrow Rock Visitor Center.

Jackson was forced into exile after the Union took control of Missouri. He died in Little Rock, Arkansas, in 1862. It's not clear how the family was able to transport the body all of the way back to Arrow Rock through the middle of a war zone. 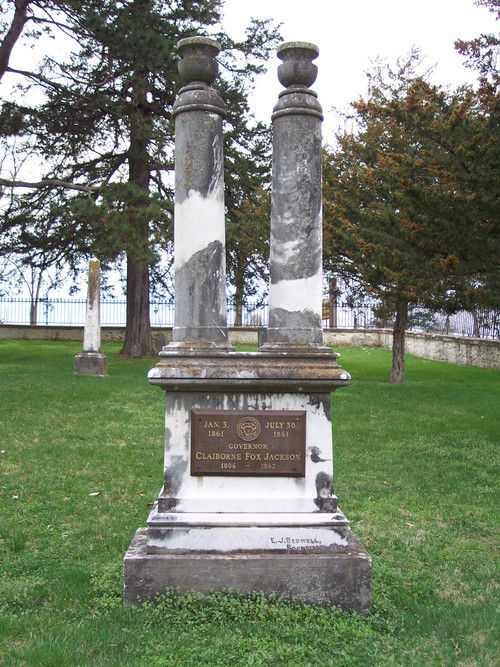 Driving directions: From Arrow Rock, take Highway TT west from the intersection of Highway 41 and Main Street (the main crossroads in town). Turn left on Route AA and go south for roughly a quarter mile. Look for the entrance to Sappington Cemetery State Historic Site on the left and follow the driveway until it ends at a parking area.

Lewis and Clark, of course, are well known for their exploits. Few people realize, though, that both men served as territorial governors of what is now Missouri.

Meriwether Lewis was appointed 1807 by Thomas Jefferson as the governor of the Territory of Louisiana. He wasn't cut out to be a politician. Lewis died of gunshot wounds on Oct. 11, 1809, while travelling through Tennessee en route to Washington, D.C. The death remains a mystery, but was probably suicide.

By the time William Clark was appointed governor in 1813, the place was known as the Territory of Missouri. It was a huge region, including all or parts of what would become these states: Missouri, Arkansas, Iowa, Minnesota, Nebraska, South Dakota, North Dakota, Colorado, Idaho, Montana, and Wyoming.

Clark was the final Missouri territorial governor. In the 1820 election for the first state governor, he was soundly defeated by Alexander McNair. President Monroe then appointed Clark as Superintendent of Indian Affairs, an office he held until his death in 1838.

He is buried in the plush Bellefontaine Cemetery in St. Louis. His grave overlooks the Mississippi River just a few miles downstream from where the Lewis and Clark expedition kicked off their voyage up the Missouri River. The view is obstructed by industrial buildings and isn't nearly as scenic as the river views enjoyed by Gov. Dunklin and Gov. Stark. 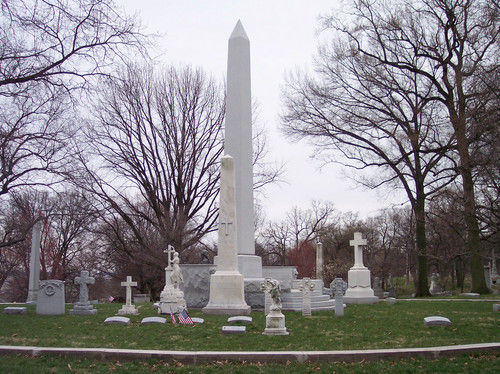 Bellefontaine Cemetery is also home to many other prominent names from Missouri history, including another territorial governor (Benjamin Howard) and two state governors (Frederick D. Gardner and Trusten Polk). Good luck finding their graves, however, as the cemetery is simply massive.

Driving directions: Take Interstate 70 north through downtown St. Louis and exit at Florissant Avenue (Exit 245B). Follow Florissant to the north for a few blocks and look for the cemetery gate on the right. Visit during business hours so you can ask for a cemetery map at the gate office -- you're going to need it.