Cemeteries get a bum rap as spooky and creepy places, especially during the Halloween season.

That's not the case for the final resting places of some of Missouri's governors. They've got some very nice digs indeed.

Governors Daniel Dunklin and Lloyd C. Stark have fantastic views of the Mississippi River. Charles Hardin lies within earshot of Faurot Field and the University of Missouri. Meredith Marmaduke and Claiborne Fox Jackson rest in a pleasant spread near the old Santa Fe Trail. William Clark enjoys one of the more exclusive cemeteries in St. Louis.

Follow the "Dead Governors' Tour" to visit scenic and historic graveyards across Missouri that are anything but creepy.

Daniel Dunklin, Missouri's fifth governor (1832-1836), is buried in one of the more peculiar graveyards in the state. Located on a dead-end residential street between two houses in Herculaneum, the one-acre cemetery is owned by the State of Missouri and operated as Gov. Daniel Dunklin's Grave State Historic Site. 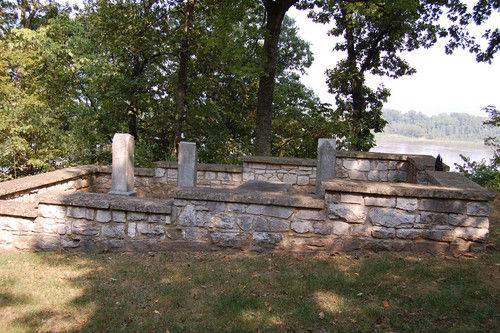 Dunklin didn't quite serve his full term as governor, resigning three months early. He didn't resign because of scandal. Instead, he was appointed by President Andrew Jackson to a better gig: Surveyor General for Missouri and Illinois.

In 1840, Dunklin moved to Herculaneum and built an estate called "Maje." He died four years later and was buried on the property. Unfortunately, by 1885 his son James had lost most of the estate except for a tiny one-acre parcel. The graves of Daniel and his wife, Emily, were then relocated to the remaining plot of land.

But what a plot! Sitting on a bluff high above the Mississippi, it features a commanding view of the river and the Illinois bottomlands. 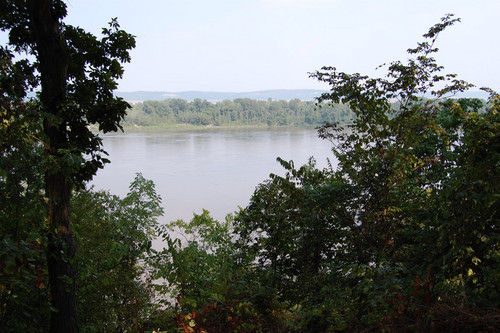 Driving directions: Take I-55 to the Pevely (#180) exit. Go east on Route Z and then turn south (right) on US 61/67. Bear left on Joachim Avenue after entering Herculaneum, then bear left on Main Street. Make a left turn on Dunklin Drive (look for the State Historic Site sign) and follow the street until it ends at a cul-de-sac. The trail to the cemetery is on the right. (See also these directions.)

Riverview Cemetery in the town of Louisiana, Missouri, easily lives up to its name. The view from the highest point of the cemetery is one of the most spectacular along the entire Mississippi River. 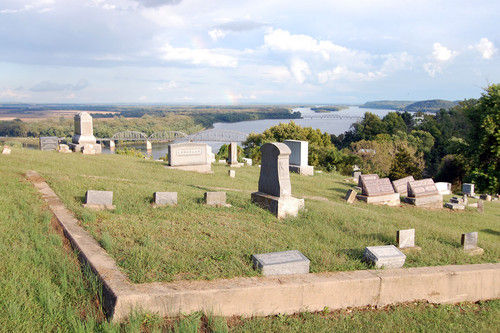 Can you guess where Lloyd C. Stark (governor 1937-1941) is buried? Near the highest point of the cemetery! 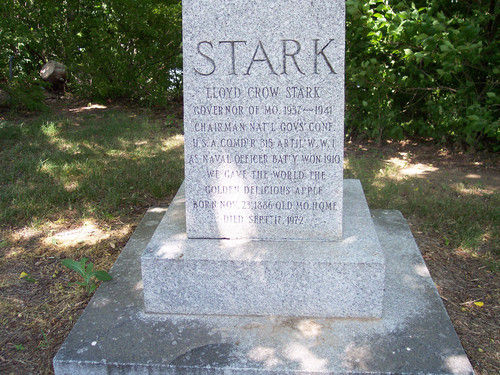 The view encompasses two large bridges and the town of Louisiana. On the right is Pike County, Missouri, while the land on the opposite side of the river is in Pike County, Illinois. This must be rather confusing. 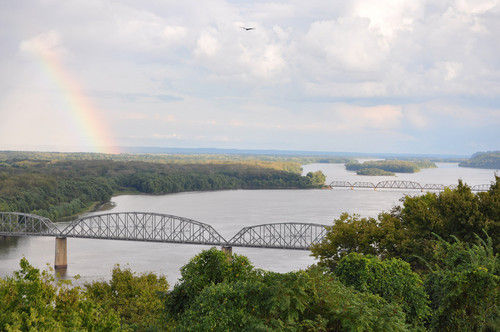 Gov. Stark was one of the brothers involved with the Stark Brothers Nursery. His headstone makes this boast about the family business: "WE GAVE THE WORLD THE GOLDEN DELICIOUS APPLE."

Driving directions: From downtown Louisiana, take Highway 79 north. Turn right on 'B' Street (look for the Riverview Cemetery sign) and follow the narrow lane to the highest point of the hill. The cemetery drive forms a one-way loop with some hair-raising curves and dropoffs. 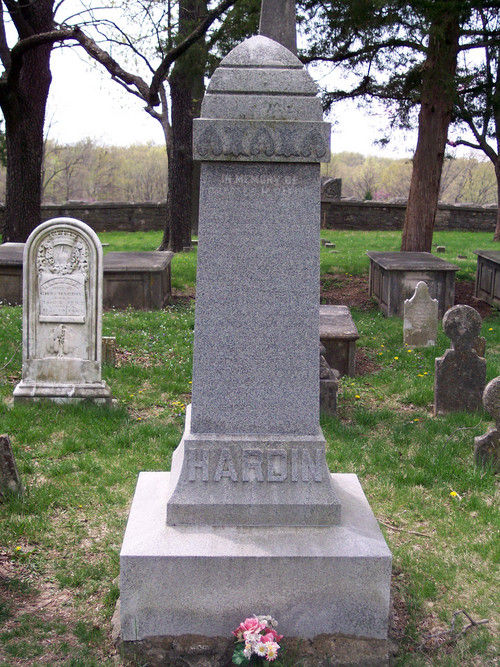 Hardin's grave is overshadowned, however, by a more famous name: William Jewell, the founder and namesake of the college near Kansas City. 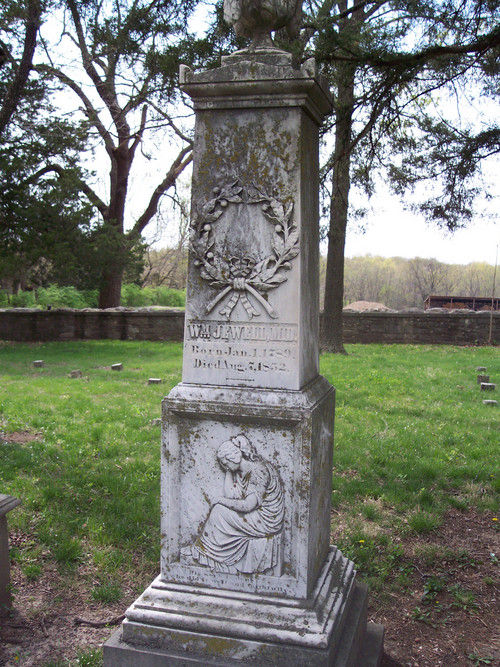 A sign on the entrance gate to the cemetery explains, in no uncertain terms, that only descendants of the George Jewell family shall be buried here. How nice. 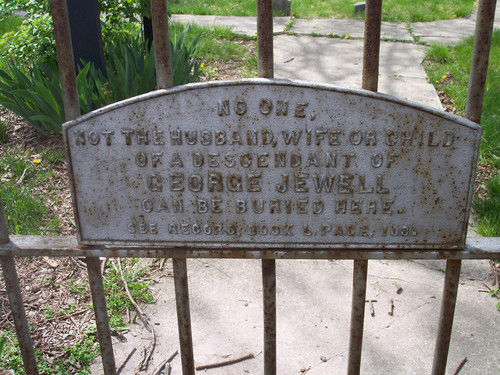 Driving directions: In Columbia, go to the intersection of Highway 740 (Stadium Blvd.) and Highway 163 (Providence Road) near Faurot Field. Go south on Highway 163 and look for a turnoff to reach the frontage road, called Old Route K. Jewell Cemetery is located along the frontage road about 1 mile south of Stadium Blvd. (See also these directions.)

Check back for Part 2 of the Dead Governors' Tour...